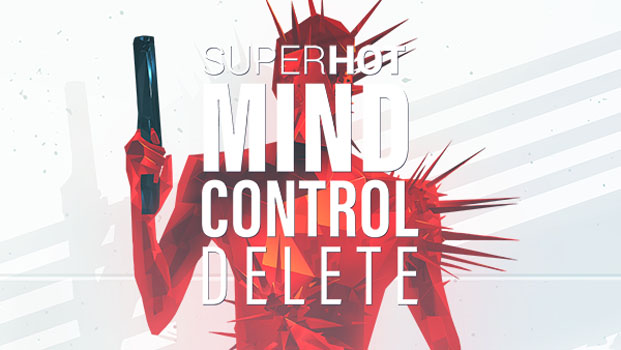 Have you ever wondered what would happen if the worlds of John Wick and Neo were to collide?  There is no denying that the result would be SUPERHOT, and in this third installment the action has never been more intense and the gameplay this addicting.  SUPERHOT: MIND CONTROL DELETE builds upon the first two games with more story, more locations, more weapons, and more impossible scenarios to master as you battle for survival.

For those who have never heard of the franchise, SUPERHOT is a game where time is relative…relative to your own character’s movement…mostly.  Time will still advance at a very slow pace but as soon as you move your body (left stick) or your head (right stick) events will start to unfold in real-time; those events being a small army of red shaded mannequins advancing on you with guns, knives, swords, you name it… as they try to pummel you into submission. 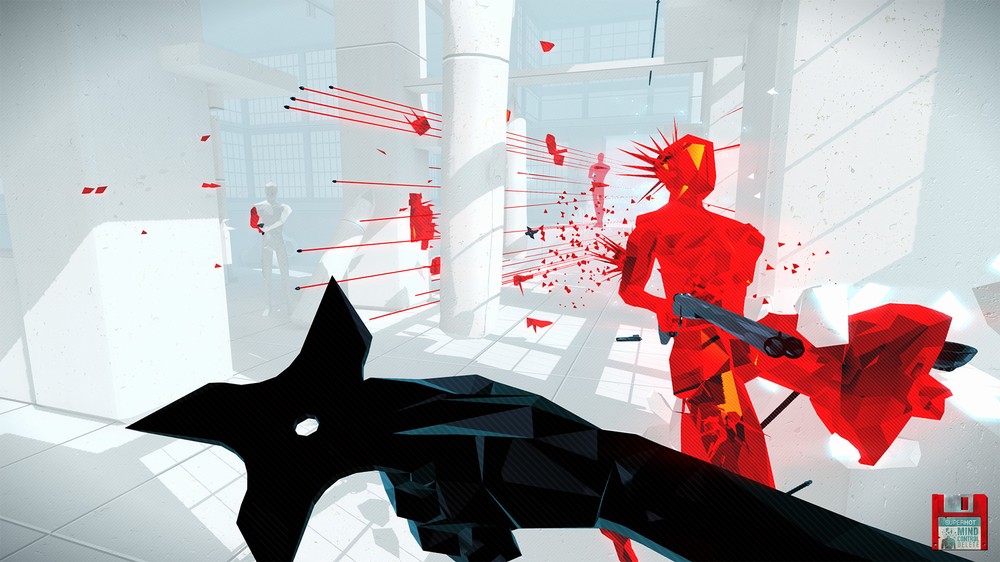 Gameplay unfolds as you strategically dictate when and how time advances through tactical awareness of your surroundings and careful enemy prioritization.  Often you are only armed with the objects around you when you start a new level.  Pots and pans, a kitchen knife, a plate or maybe a wine glass could be the only thing you can grab and throw at a guy charging at you with a katana, but when you hit him in the head and that sword goes flying you can snatch it out of the air and slice the guy in half at the waist before dodging a stream of bullets coming at you from another guy entering the room from a side door.  In almost every situation you are outnumbered and outgunned and you must use your time manipulation to tip the odds in your favor.

SUPERHOT: MIND CONTROL DELETE is a unique blend of stuntman choreography and real-time strategy game.  As each new room is revealed you have to analyze your surroundings for possible escape routes, weapon and item locations and all enemy positions.  There may be a guy coming in behind you but the very act of turning your head to see advances time for the guys already coming at you from the front.  But there is something inherently satisfying with the way the game dynamically unfolds like when you just emptied your pistol at one guy then throw the empty weapon as the next, hitting him in the head causing him to toss his shotgun in a gentle arc above your head as you look up and snatch it from the air and blast the stunned enemy in the chest.  Combat is mostly situational opportunities that keep you thinking and reacting on your feet, chaining melee and weapons combat into this organic flow of death and destruction.  It truly is the best of both John Wick and The Matrix where you can dodge bullets while killing someone with a butter knife. 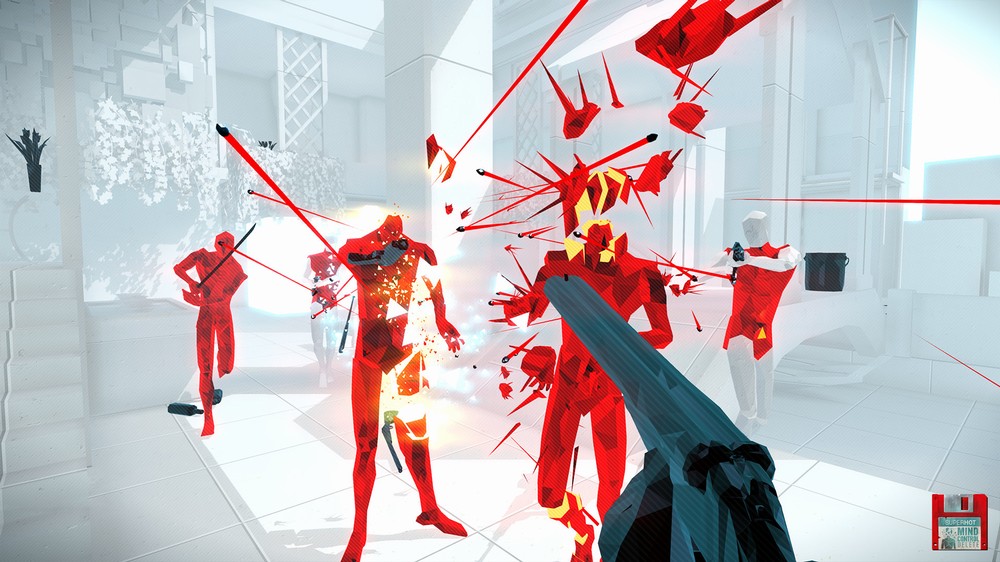 While I enjoyed the previous games immensely they were admittedly short.   SUPERHOT: MIND CONTROL DELETE definitely offers up a lot more content with more locations, more weapons, and unlockable mechanics in the form of skills, hacks, and special techniques to give you a slight advantage as enemy numbers increase in number and intelligence.  Some of the AI tactics become almost human-like as multiple enemies work together trying to distract and flank your position.

The presentation remains consistent across the franchise with various shades of white and gray backgrounds contrasted with the red polygonal mannequin enemies and your own black torso and arms and anything else in the world that can be used rendered in black as well.  The audio is particularly awesome in that it slows and speeds up as you do, so in the nightclub level there is this thumping EDM track that is all distorted and slow until you start moving around and it returns to normal speed, adding to the confusion of the encounter.  Gunfire, glass breaking, and other sounds are also appropriately distorted to match the time warp. 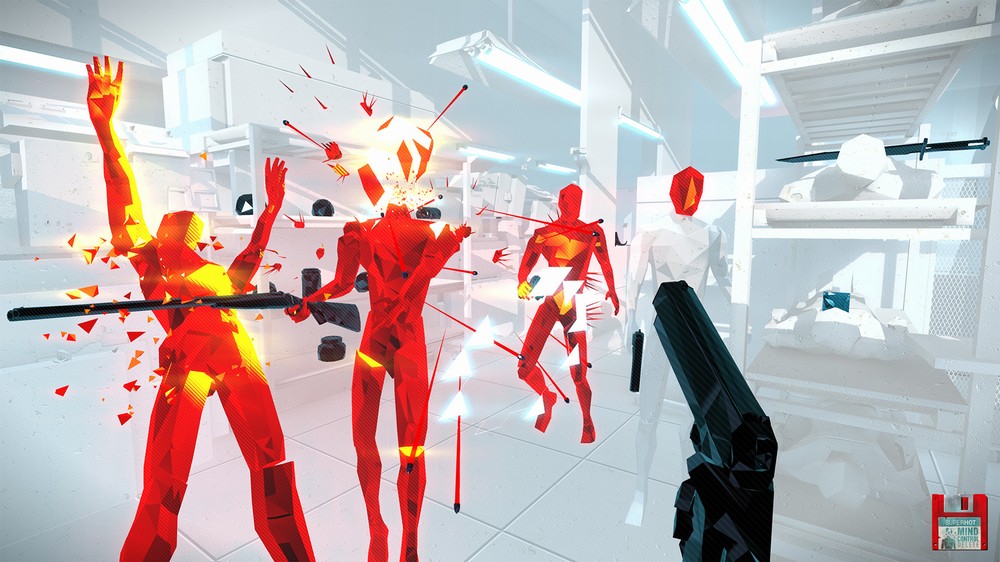 I am a big fan of the SUPERHOT VR game, and to this day it is still the best way to play the game, but admittedly that game got physically stressful when played for more than thirty minutes.  It was like playing Twister without the mat.  I was able to sit down for hours and immerse myself in the world of SUPERHOT: MIND CONTROL DELETE.   Arguably, you might not feel as connected to the game as you would in VR, but the gamepad is still a fun and reliable way to play the game.  My only minor issue with anything would be the limited environments that will start to repeat after a while, but even when they do the enemies and the choreography for taking them down will never unfold the same way twice, and you are usually replaying those rooms with new abilities.  Each encounter is relatively short making this a fun game for pass-the-controller parties since the game is just as much fun to watch as to play.

SUPERHOT: MIND CONTROL DELETE is a fantastic evolution of the franchise that is ridiculously violent yet manages to escape the censors with nondescript mannequins and polygonal dismemberment.  The physicality of the VR version has been replaced with a more thoughtful and tactically nuanced version of the game that is just as rewarding and potentially less painful to play over the extended hours this addictive shooter-brawler will demand of your time.  With dynamic encounters and organic combat the hardest thing about SUPERHOT: MIND CONTROL DELETE is finding a place to quit. 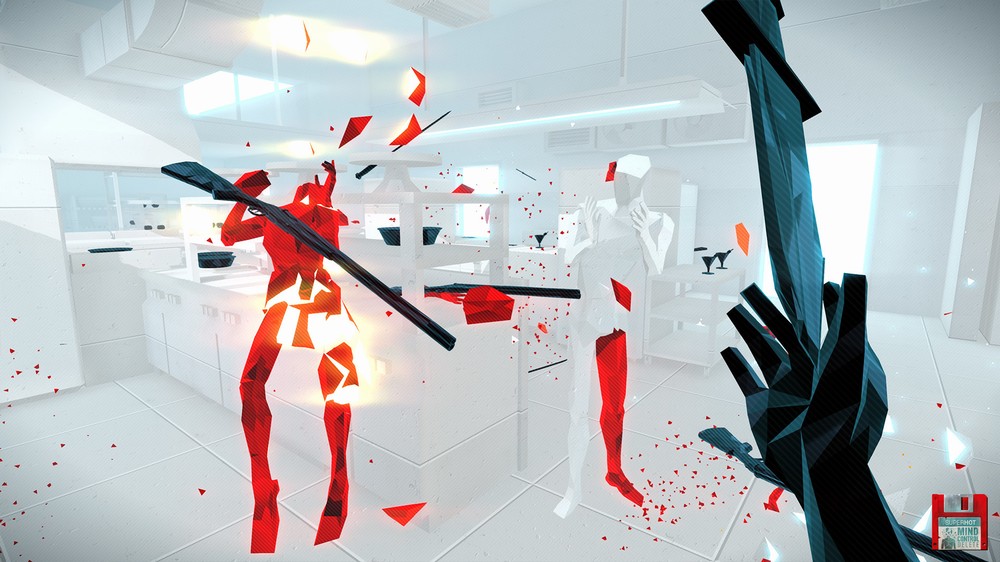