Competition is heating up as pinball wizards Zen Studios get ready to release their newest silver ball creation, Super League Football. Players will side with their favorite clubs including Arsenal, Liverpool FC, FC Barcelona, Real Madrid C.F., A.C. Milan, Juventus Football Club, and A.S. Roma as they square off to dominate league play in a new social pinball experience.

“World Cup Soccer (Midway 1994), is one of the greatest pinball tables ever created, and we have long been thinking about creating a modern day version football pinball table that would capture the essence of the game in today’s climate, include the biggest clubs and players, and create an exciting level of competition that makes club football so entertaining, said Mel Kirk, Zen Studios Vice President of Publishing. “Working with the biggest clubs in the world and involving players like Lionel Messi, Neymar da Silva Santos Júnior, Gerard Piqué, Francesco Totti, Andrea Pirlo, and Luis Suárez really takes this pinball experience to another level.”

When players download Super League Football, they will select the club they wish to support. Their table will be themed in brilliant style, including images of the clubs biggest stars, team mascots, chants and theme songs. As games are completed, scores will tally to each club’s global leaderboard, providing an overall rank for each club in the league on a global scale on each platform. As you lead your team through league play, you will earn trophies and accolades which will be placed in their own trophy room. 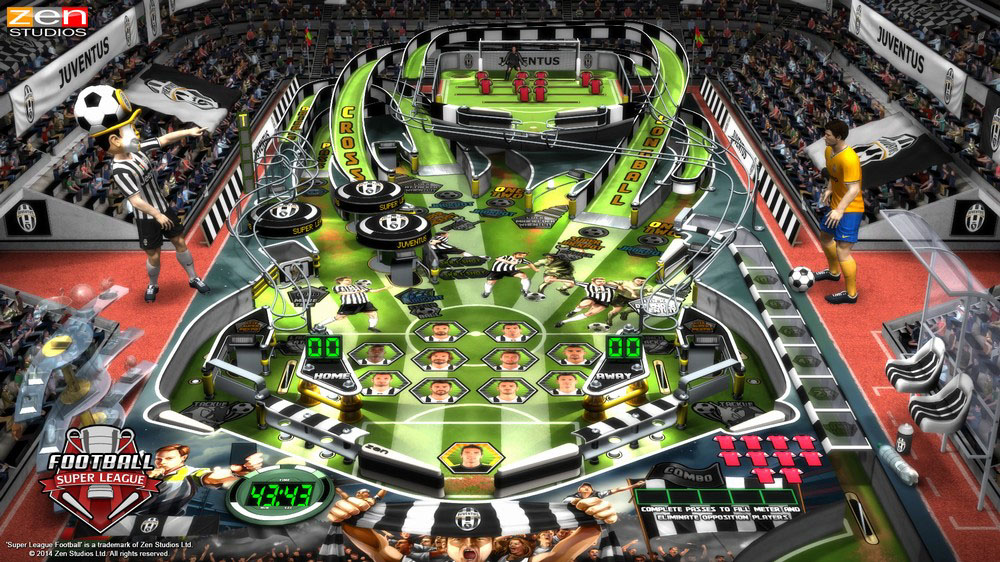 “We are excited to bring digital pinball to our Roma fans around the world. The pinball game makes you feel like you are in an arcade, and fans will enjoy seeing many of their favorite Roma stars in the game itself,” said Shergul Arshad, Head of Digital, A.S. Roma.

“Zen Studios invites players with no football club allegiance to join the Zen Studios F.C. team. We certainly need your help if we are going to compete with the big boys,” said Bobby Loertscher, Zen Studios Community Manager.