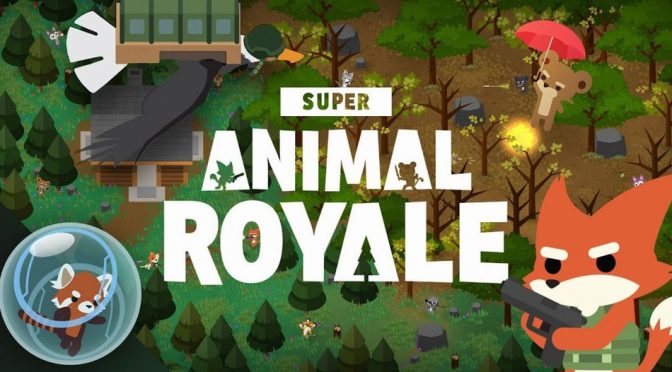 Super Animal Royal wants to fill that violent stuffed animal-shaped hole in your heart. Maybe you didn’t know you had it in you, but in this 2D Battle Royale, you and 63 other fuzzy killers will drop onto an island where it’s every-animal-for-themselves. Whether you emerge victorious in this fight-to-the-death or fall prey to an opponent, this charming shooter is promising fun for all in this unique presentation of a Battle Royale. So hang up that combat helmet, take a break from jumping out of the Battle Bus, and maybe let someone else be the Jumpmaster for a while. While this small but mighty game doesn’t get everything right, it succeeds in providing a welcome change of pace in a genre that’s growing too crowded and stale. 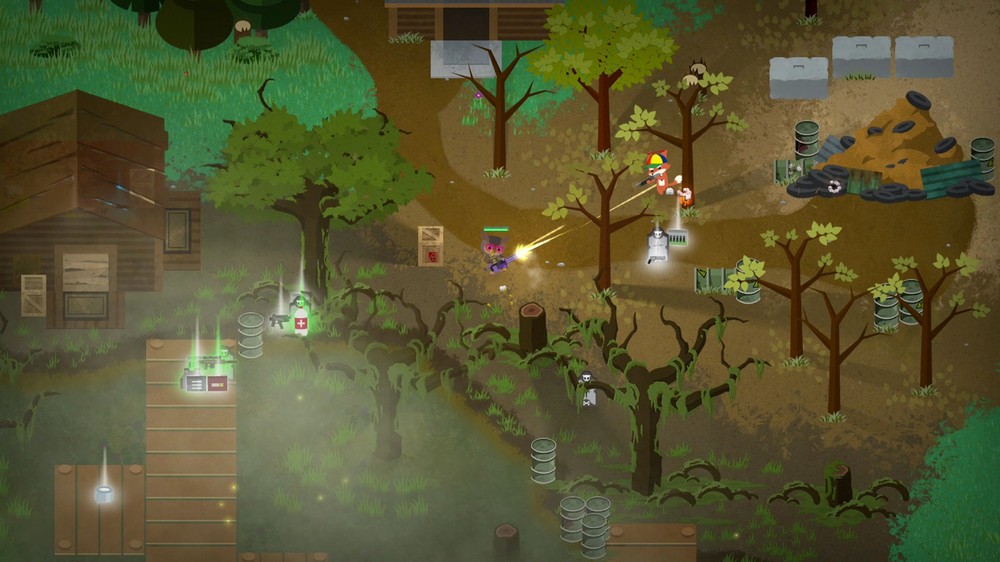 Published by Modus Games and developed by Pixile Studios, Super Animal Royale is the studio’s first foray onto consoles. Their only previous entry is a tower defense iPad game. This new entry is launching on all major consoles as well as Mac, PC, and Stadia. The cute and fuzzy free-to-play game want’s to be as approachable as possible. The game presents as a top-down, 2D shooter that anyone could take aim in. 64 players parachute down onto a large map and attempt to be the last anthropomorphic animal standing. The game has all the playlists you’d expect with solos, duos, and squads. Matchmaking time is fast although judging by some of the player’s names I suspect they may be filling servers with some bots. I particularly liked their Mystery Playlist that featured a unique wrinkle each match like one-shot-kills or faster bullet velocity.

From the second you parachute down you’ll soon find that only opponents that would be visible by your avatar show up on the screen. This is a clever way to solve the issue of being too omnipotent as you’re an eye-in-the-sky camera perspective. The system works well as I was able to ambush several opponents by hiding in what they perceived to be an empty room. Sadly, this is about where tactics end, and skirmish variety begins to get repetitive. 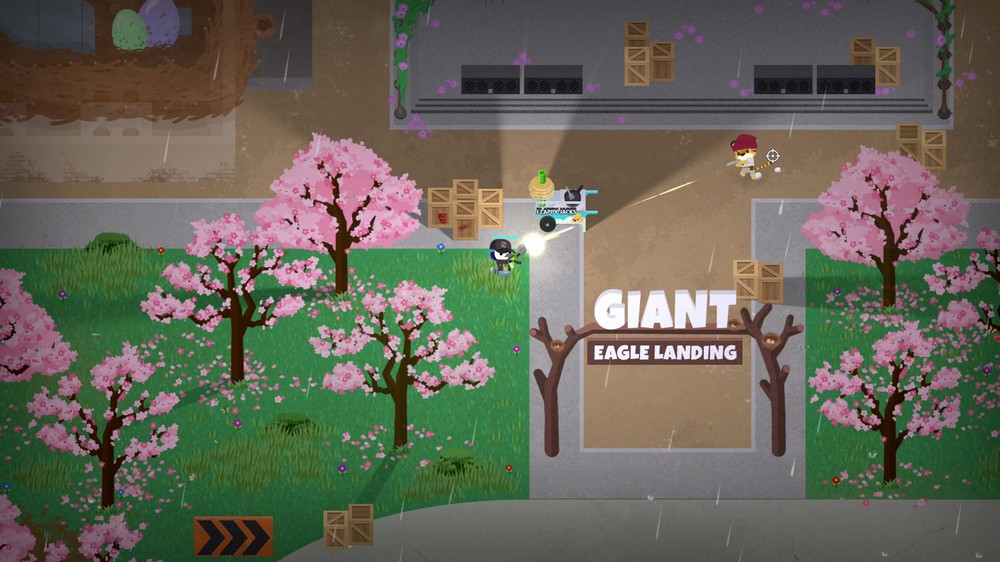 Battle Royale’s thrive on two things: balanced weapon diversity and spontaneous skirmishes. The former gives way to generating the latter. The fun in playing a Battle Royale game is having diverse tools to then attack and defend through unscripted encounters to hopefully emerge victorious. However, from a pistol to a sniper rifle, I found that the time to kill, range, and tactics I used were about the same no matter which equipment I held. I understand they are given different damage points and accuracy, but I didn’t feel they were unique enough to motivate me to pick up a different gun or to master using one over the other. To its credit, vehicles like gerbil balls and tools like a gas filtering-snorkel help shake up the formula, but not enough to make me approach an enemy encounter differently. 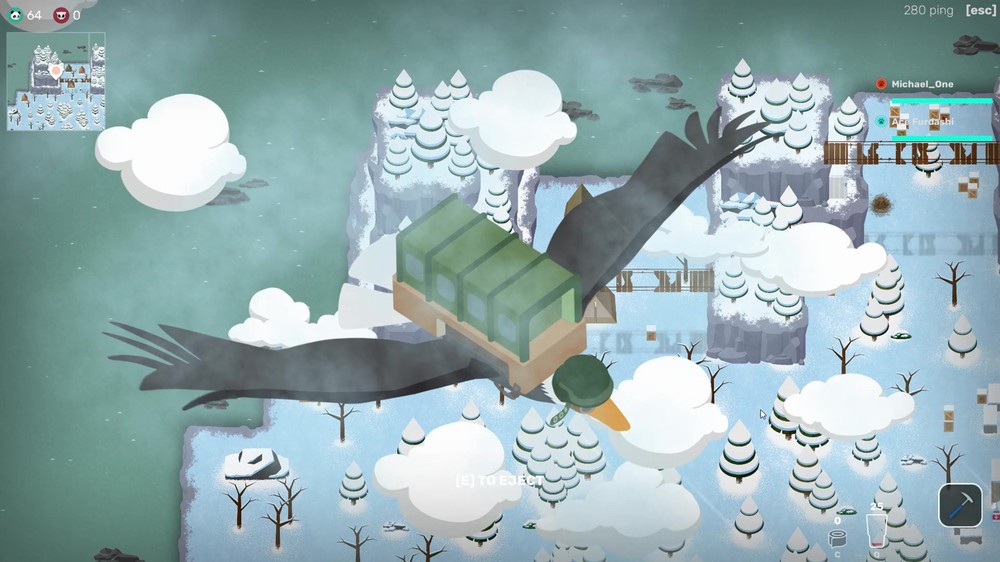 This deficiency is harder to put your finger on than you might think because the game is just so freaking charming! This game is hilarious and absurd in the best way. I genuinely was chuckling at all the animal puns and dressing up my bear in hats and glasses before our next killing session. Furthermore, it’s rare to find so much lore in a purely multiplayer game. Most franchises don’t tell you why you want to kill everyone else, but Super Animal Royale does a great job of building a fun and interesting world to explore. One aspect of their community building that I thought was particularly brilliant was putting fan art into an in-game museum. I loved going through and seeing what their community came up with. It made me feel like I was joining a new inside joke and a part of something bigger.

I have to note that I did run into some technical issues on console. Though I spent most of my time on PC, when testing their squad system on Xbox I was unable to invite my friends through the application itself. Instead, we had to go through Xbox’s party and game invitations from a systems-level and that was a pain. It was hit or miss if our joining one another was be successful. Eventually, we were able to get into each other’s game parties and into shared matches. The in-game voice chat works as you’d expect and we had a good time running around and trying to outwit other teams. Everyone was able to learn the game within a matter of minutes and this is a credit to the simple and approachable design. I can’t say we’ll be going back to Super Animal Royale until they have new content, but it was a fun way to spend an afternoon. 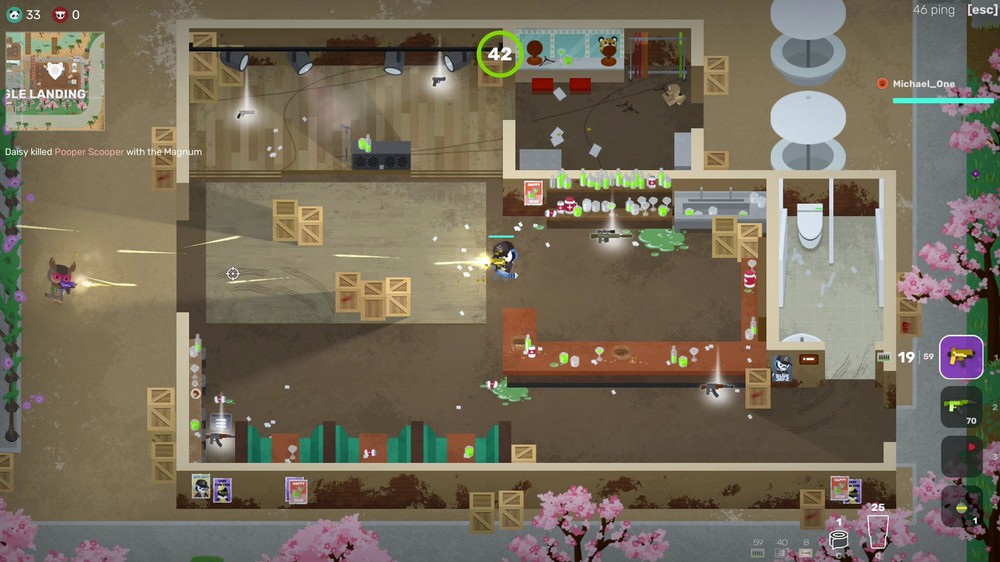 If you’re looking for a nice pallet cleanser from Warzone, Apex Legends, or Fortnight this is an enjoyable way to liven things up for your group of friends. I think you’ll see everything it has to offer after a few hours though. I didn’t feel the combat was so deep that I wanted to keep mastering the systems to get better. Instead, I gravitated towards Mystery Mode to change up the skirmish tactics. Super Animal Royale does a commendable job of fitting the Battle Royale formula into a smaller and more approachable package, but I’m not going to sink the same number of hours into it that I have with other tactical shooters. It has similar systems and features as other larger games in the genre like armor plating, different types of grenades, and a very clever visibility mechanic, but it’s not enough to really hold my attention. Caveats aside, if you’re a fan of Battle Royale games, you should at least give Super Animal Royale a go and see if it clicks for you.