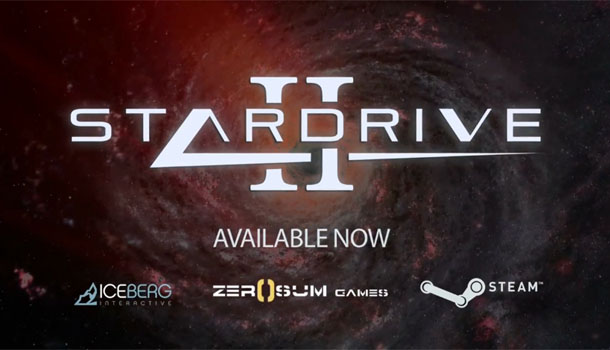 Zero Sum Games and Iceberg Interactive are proud to announce today that the all new 4X space-strategy game StarDrive 2 is available now on Steam. In StarDrive 2, players will reach into the unexplored regions of space fully loaded with options to engage in massive real-time space combat or enter into the all new ground combat, partner with friendly factions, research new technologies, design new ships, and much more. Built on the Unity Engine, StarDrive 2 is highlighted by its impressive new levels of graphic polish and detail, streamlined interfaces, and intense, sophisticated 4X gameplay.

StarDrive 2 is a turn-based 4X strategy that builds on the premise of the popular original game, StarDrive, with the goal of building an empire to span the stars. Players will explore a vibrant galaxy filled with danger and intrigue in a deep turn-based strategy layer. Fans will design custom spaceships and deploy them into real-time battles with spectacular graphics and effects, and they’ll hire heroes to conquer alien civilizations in turn-based tactical ground-combat mode. StarDrive 2 is the 4X game that fans have been waiting years for.

“Creating StarDrive 2 on the Unity engine has been a rich, rewarding experience, and now that it’s complete, I am totally excited for fans of the franchise and 4X genre to dive in,” said Daniel DiCicco, Zero Sum Games. “There is so much more here that 4X gamers will enjoy: The ship design offers a better, faster interface, the ground battles add diversity, new alien races add complexity, and the Unity Engine shines in the background all the while.”

StarDrive 2 is available now on Steam in two versions, the Classic Version for $29.99, and the special Digital Deluxe version for $34.99, incorporating a Digital Artbook, Paint Job Pack, Desing Journal and a specially created Soundtrack.