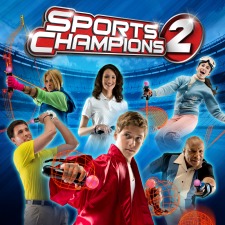 Zindagi Games is probably best known for the original Sports Champions that quickly became the equivalent of Wii Sports on the PS3, or maybe you enjoyed their Medieval Moves: Deadmund’s Quest game that released this time last year that took the sword and shield combat and archery components from Sports Champions and crafted them into a compelling fantasy adventure setting. Regardless, the masters of Move are back with Sports Champions 2, and after a week of solid solo and party fun I’m here to tell you about it. 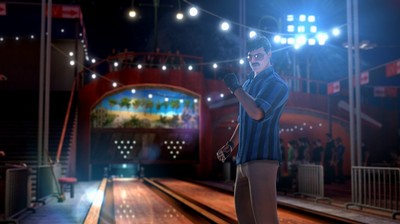 These events can be approached in solo Cup Play, or if you would like to gather a group of friends you can check them all out in Free Play or Party Play that will organize the players into a tournament bracket and randomly choose the events. There have been several enhancements to the interface and the game engine that no longer requires the constant recalibration of the Move controller. You simply stand in your video box and squeeze Move+Trigger to lock in your controller…no more up-down-belt buckle aerobics. This also means that any player can use any controller, so you don’t have to keep track of a certain device/colored orb if you are playing with fewer controllers than players.

The first thing you have to do is create your character, either by choosing from the premade selection or creating your own avatar by customizing those characters with various clothing and gear that is unlocked through solo cup play. You’ll also get to take a snapshot of yourself, posing with a variety of augmented reality objects like a foam finger, dumbbell, trophy, hammer, or stick of dynamite just to name a few. This photo serves two purposes. It clearly shows which players will be playing the next event, and it also allows the winner of each event to deface the other player’s photo with various colors of magic marker. This can quickly turn an E10+ game into an M rated game with just a few strokes, but that’s not the ESRB’s problem. Later in the game you can also take victory poses and trophy photos and share them on your connected Facebook page.

Sports Champions 2 is obviously designed as a party game and it serves that function well by providing a lot of fun gameplay with challenging events and responsive controls, but sooner or later you will find yourself playing alone and Zindagi managed to work in a solid list of sequential challenges for each sport, and as you win one challenge the next will unlock in a surprisingly lengthy series of events. To add some pressure, you are awarded up to three gold stars for each event, and unlocking those can be extremely challenging, especially in the golf.

So how about those sports? Going down the line we’ll start with Skiing. Depending on how many controllers you have to go around, many of these games can be played with one or two motion controllers, and while you may get a bit of added precision when using two, it’s mostly a mental thing, and skiing is the perfect example. Skiing requires you to furiously move your hands as if you were gripping a pair of ski poles – or at least one ski pole if you only have one controller available as was the case in my four-player party with only two controllers. You pump the controller to build up speed than twist your wrist slightly to steer your way down the slope while raising up or ducking down to crouch or stand. It takes a few minutes to fully grasp the nuances but it’s a lot of fun when you figure it out.

Tennis is basically a poor-man’s version of Virtua Tennis 4 or EA’s Grand Slam Tennis. Like those dedicated tennis games, Zindagi fares no better in creating a connect feeling between your motions and the ones you are seeing on the screen. Delayed reactions and even blatant errors in making contact with the ball suck the fun out of this game and unlike table tennis where you can stand in one position, you must now contend with moving your player around the court to reach the ball. You can work through a lot of the timing issues by playing the solo cup, which will make everyone else hate you during party play. 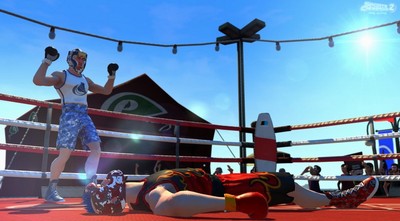 Boxing is another game that really wants two controllers, otherwise you are trying to throw punches while pressing those tiny symbol buttons to dodge and weave and throw punch variations while simultaneously blocking with the trigger. Ultimately, multiplayer boxing matches devolved into both players furious punching away in a race to knock the other player out first (while trying not to hit the person standing by their side with a stray right cross), while solo play required a bit more strategy, but also allowed me to play using both controllers for more accurate rights and lefts.

Bowling has been done to death on the PS3 in everything from major releases to lame digital download variations and while the bowling in Sports Champions 2 is far from perfect, it is definitely in the top-3 of bowling games, not just on the PS3, but across all platforms, and much like Wii Sports, this is the standout game in the compilation. The Move does a phenomenal job of not only tracking speed but also the slightest of twists in your wrist to apply realistic spin on the ball effectively allowing you to bowl in this game just like you would in real-life (wear your wrist strap). Admittedly, some of the pin action is questionable at times, as I was picking up splits in the game I would never be able to do at my local lanes, but I have yet to bowl a 300 game – something I did almost immediately on the Wii. Playing in the solo cup events is great fun. Not only do you get to bowl against computer bowlers of increasing difficulty, you also get these crazy challenge events that put you on a timer for Super Pin Bowling or where you have to knock down pins lined up down the alley in crazy patterns and lines.

Golf is another game that is easy to find in other forms on the PS3 ranging from Tiger Woods to various mini-game variations, but Sports Champions 2 blurs the lines of both and brings you some surprisingly realistic golf action and responsive controls that again, detect the slightest twist of the wrist and mirrors that on the club face as well as the strength of your swing (wear that wrist strap). Aiming your shot, addressing the ball, and making successful swings definitely takes some skill, and there is a great tutorial in place as well as fun and challenging cup events and competitive party multiplayer. 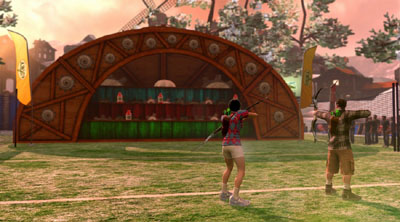 Last up is the return of Archery, which seems to have been greatly enhanced since the first game; perhaps using new detection code from Medieval Moves. The aiming is a lot more refined, and you still get that great sense of immersion as you reach over your back to grab an arrow, notch it, then zoom in on your targets. Whether you are playing the cup challenges or in the timed multiplayer events, Archery is probably the second best game in the collection after bowling.

Sports Champions 2 definitely has better visuals than the first, and all the events take place in a unified themed location so you might see the ski lift behind the tennis courts or bowling alley. Most of the focus is on the games, so characters and background art might not be as fancy as some AAA games, but in the heat of competition you really aren’t checking out texture detail on that rock as you are screaming down the ski slopes or questioning the blocky crowds in your tennis match. The game supports 3D which adds some cool depth to many of the events; some more so than others, but it’s probably best for solo play only unless you have enough glasses for all your party guests, otherwise that’s just one more thing you’ll be passing around the room.

The music and sound are pretty good; nothing outstanding but good enough for a party game or casual solo experience. I wasn’t expecting ESPN–quality commentary. The game does allow each player to record their own short personal taunt during character creation and those are played back at certain times throughout the game – just another fun twist like the photo graffiti.

I was slightly annoyed by the lenghty load times. Sports Champions 2 doesn’t install to the hard drive and there is no way to force an install like on Xbox, so you have some 30+ second loads between various screens that can often add up to a minute or more, not just changing events, but simply changing players within the same tournament session. These load times are more easily disguised in Party Play, as players are moving into postion and passing around controllers, but in solo Cup Play the waits are painfully annoying when it’s just you staring at a load screen.

If you enjoyed the first Sports Champions then the sequel is probably worth checking out. Bowling, Archery, and Golf are the standout hits and Skiing is also quite fun, but Boxing and Tennis are pretty lame and will likely only come up in your randomly selected Party Play modes, as nobody would ever intentionally want to play them. Sports Champions 2 is one of those games that gets better the more people and controllers you have to throw at it, but also offers a nice casual pastime for solo gamers as well. Definitely worth a look; especially if a PS Move is in your holiday future and you need a good game to play with it. 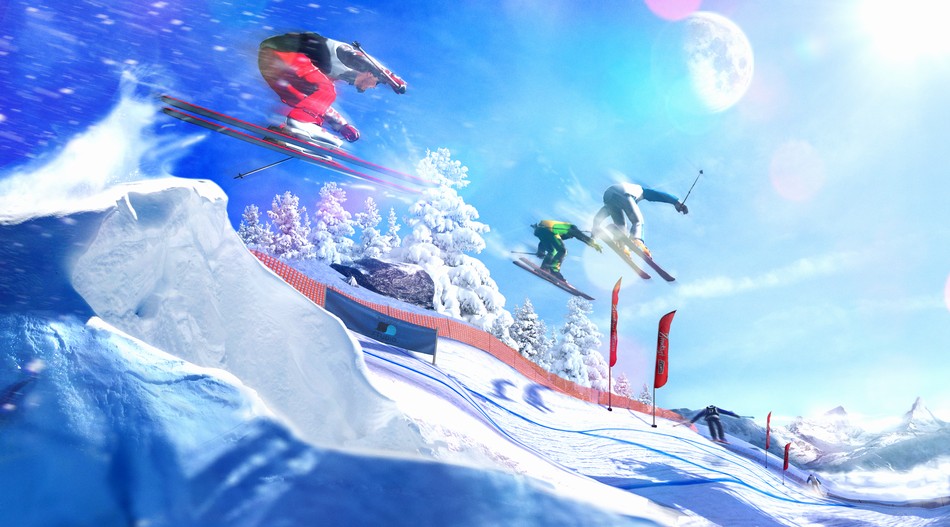 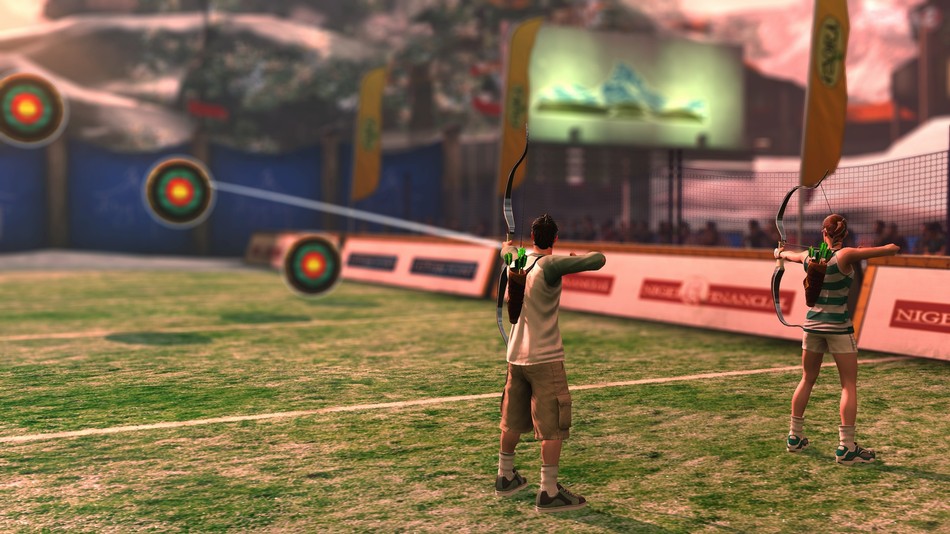 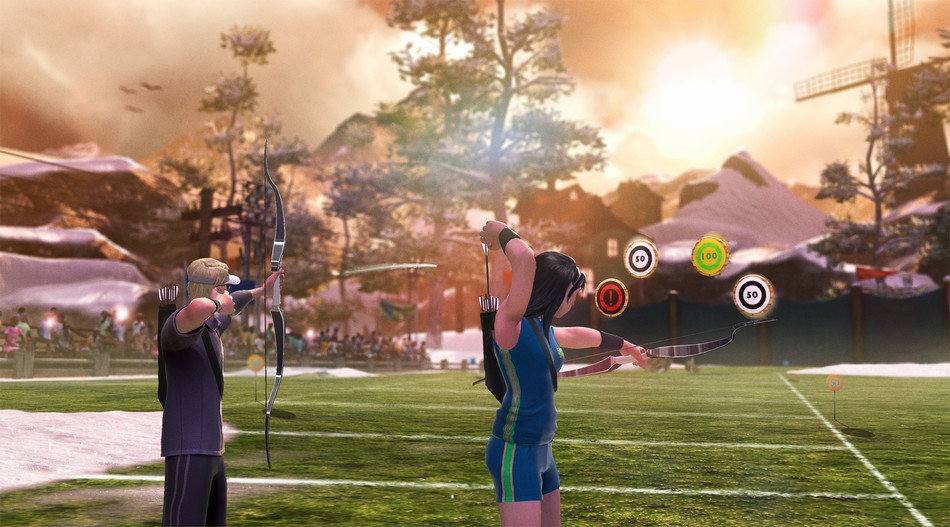 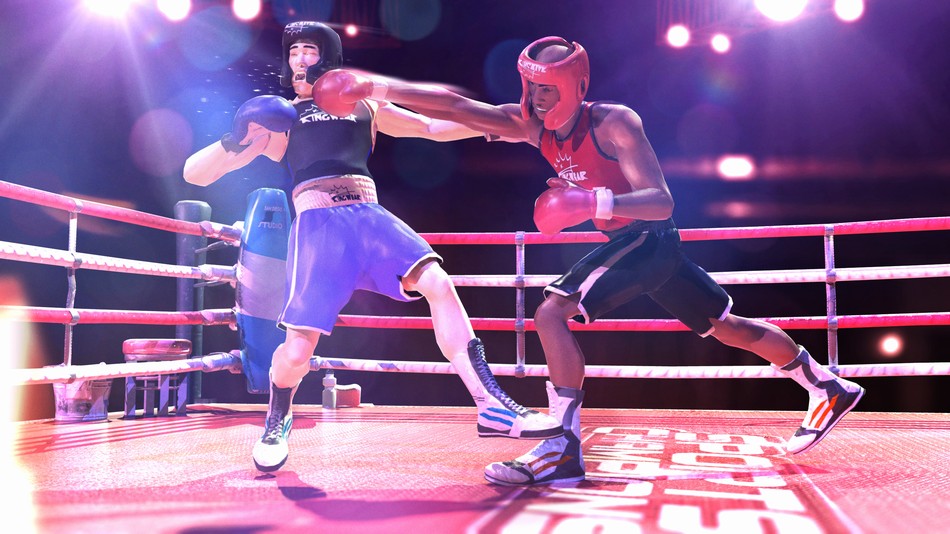 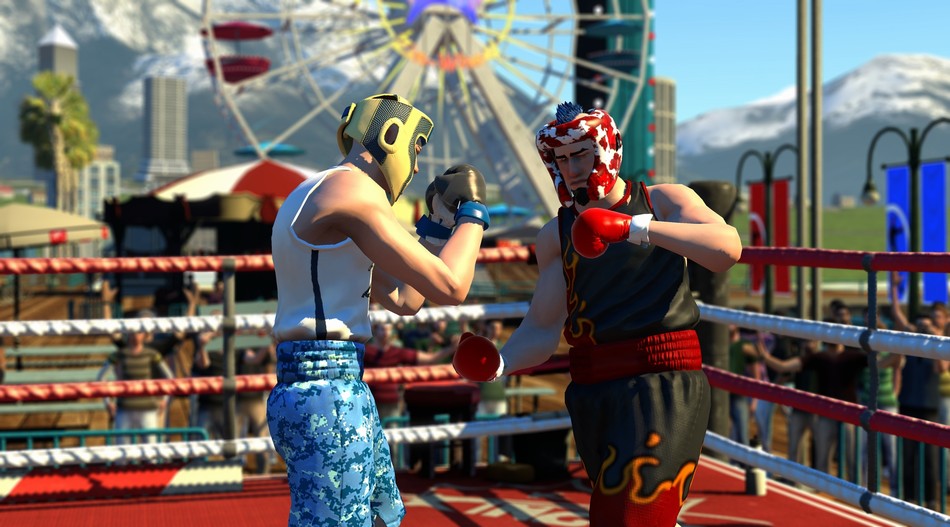 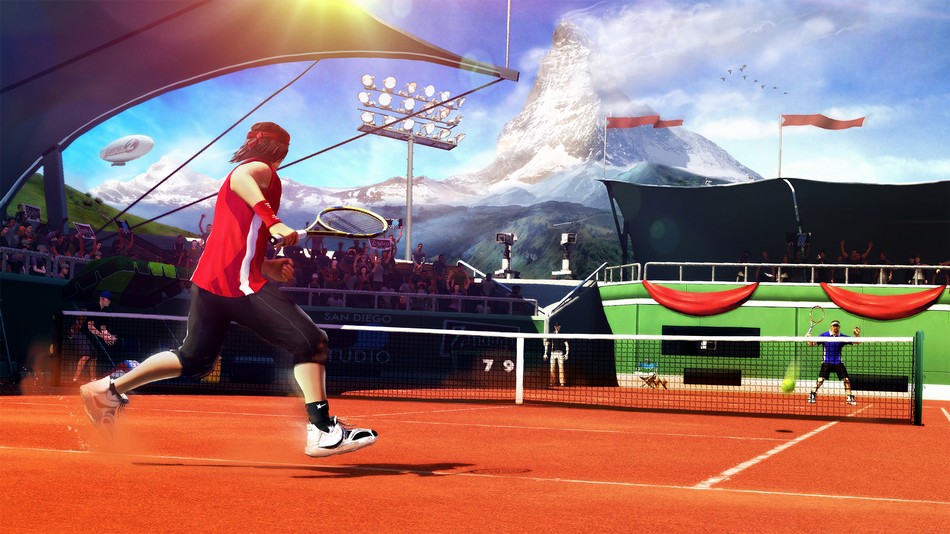 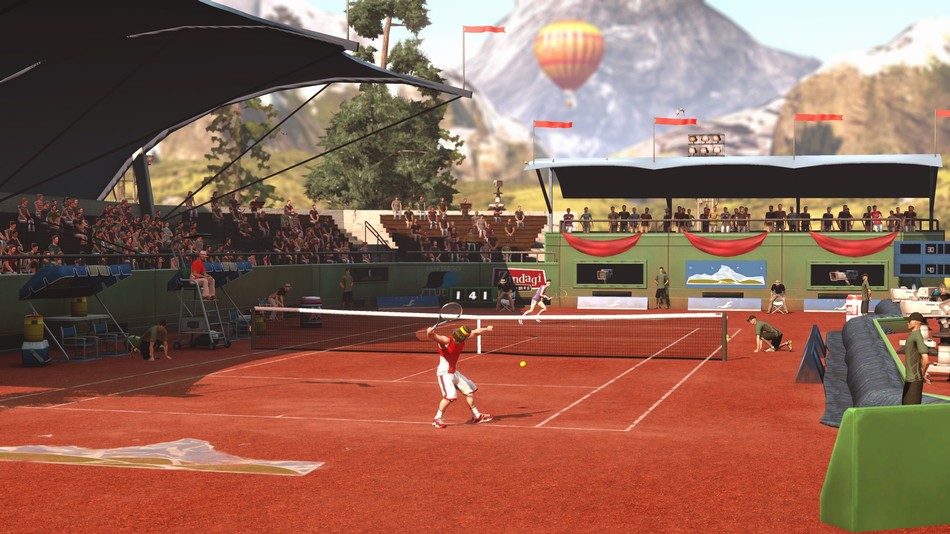 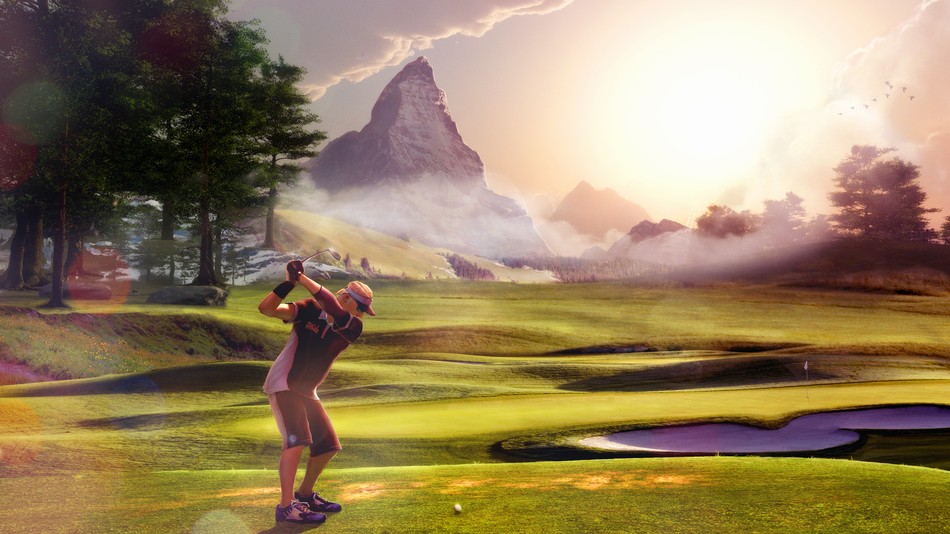 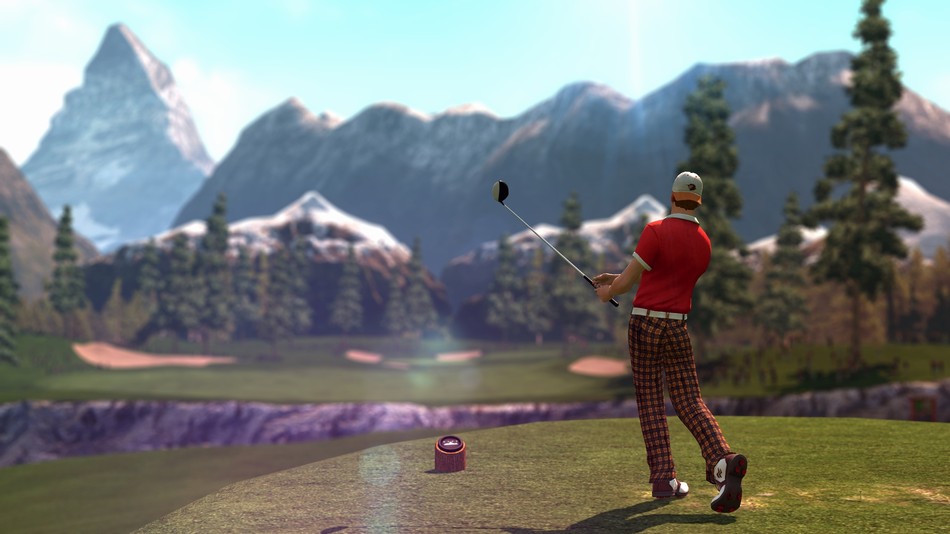 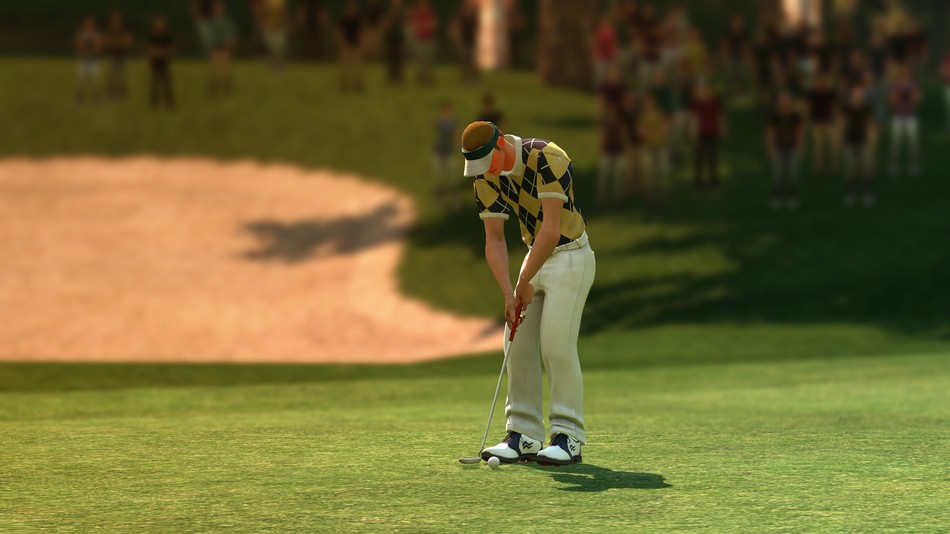 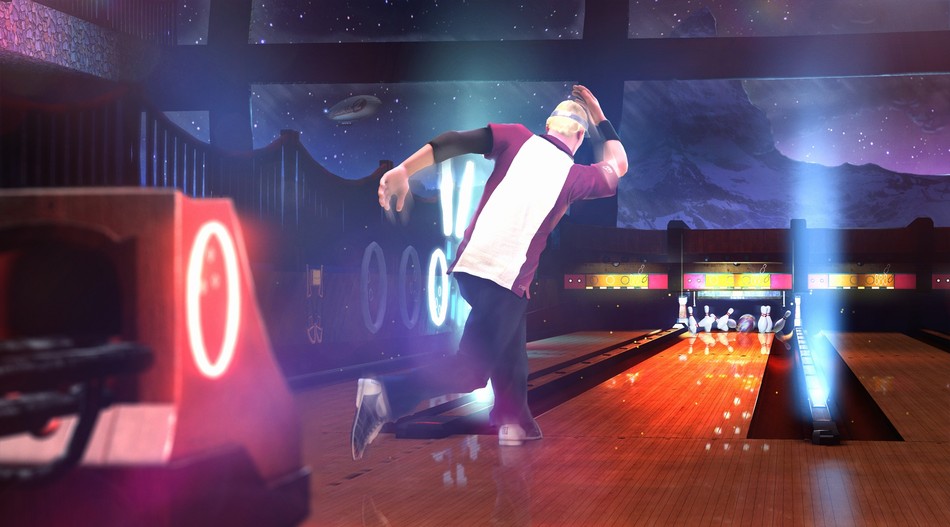