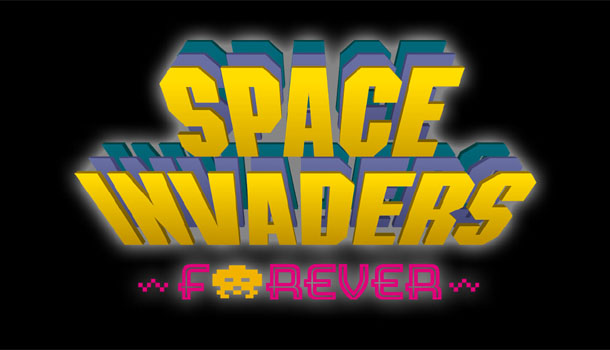 Space Invaders Is easily one of the most recognizable properties in videogames. Young or old, gamer or non-gamer, chances are that if you show someone one of the alien shapes, they will know the game that they belong to. It’s no surprise, then, that compilations of various Space Invaders releases continue to prove their popularity, with Space Invaders Forever being the most recent example. What is surprising, though, are the games chosen to make up this collection. Not only is the set limited to three titles, but the three that have been chosen are a strange collection that would almost feel more at home as bonus offerings to a larger, more complete selection. 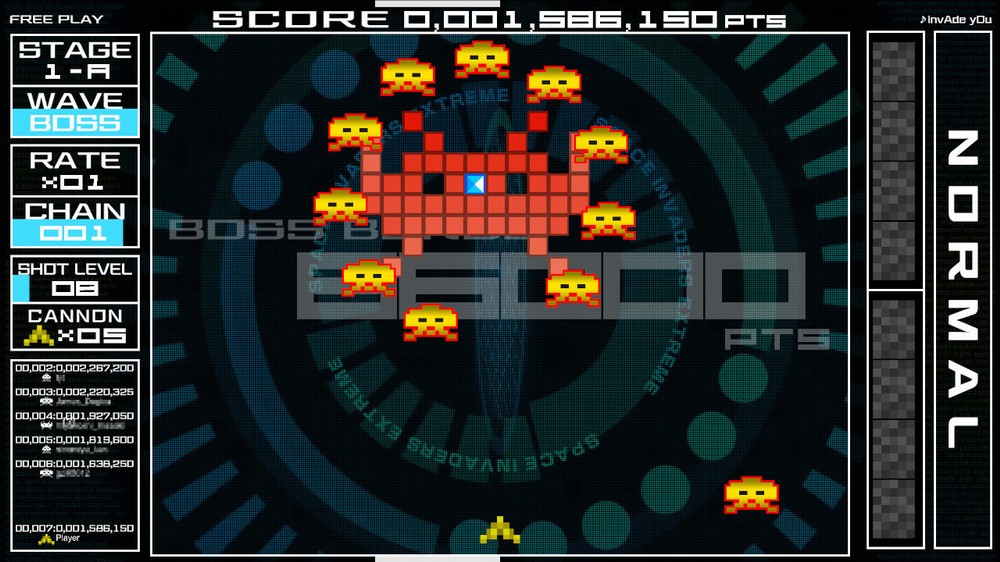 The meatiest entry in this collection is Space Invaders Extreme, which gives off a strong vibe of being released in the mid-1990s, despite actually releasing in 2008. The main reason for this is the aesthetics: while the gameplay visuals are largely similar to what you’ll have seen from Space Invaders before, the animated backgrounds look like the kind of psychedelic shapes and colors you would see in a music video on MTV in 1995. What happens in the foreground is interesting, however: the Extreme label seems to apply to the fact that your alien foes now come in a wide array of colors and shapes, each indicating different abilities and weapons that add extra levels of challenge.

In Space Invaders Extreme, your enemies can turn 90 degrees to make themselves flat, they can shield themselves, and they can move outside of the larger pack to create distractions or require you to analyze threats. There are rewards on offer for eliminating series of the same colors and shapes, and there are bonus levels available should you take out particular UFOs, which can grant the player special weapons such as laser beams or bombs. It’s worth pursuing these extra scores as well, as breaking through certain score ceilings allow the player to continue down different branching paths of the Arcade Mode, promising higher scores in return for an increased level of challenge.

Space Invaders Extreme strikes a good balance between sound and visuals, with a mechanic similar to the more recent Tetris Effect where your actions can impact and compliment the beat of the soundtrack. Combined with the trippy visuals happening behind the main action, this causes Space Invaders Extreme to quickly cause players to enter into the kind of flow state that can often be found in games of this ilk. It’s easy to move through one stage to the next, focusing only on the screen and ignoring everything else around you until you reach the final boss and suddenly realize that you’ve completed a run.

For all that Space Invaders Extreme creates and presents and interesting set of twists on the typical Space Invaders formula, it’s disappointing to then move onto Gigamax 4SE and Arkanoid vs Space Invaders to see how by-the-book both of those titles feel. Gigamax 4SE is the most disappointing and the segment of Space Invaders Forever that I spent the least amount of time with, as it just doesn’t offer up anything interesting. Designed as an opportunity to play Space Invaders with three other players, Gigamax 4SE doesn’t allow for online play, and instead requires you to have four players available in one location. This would be difficult to arrange at the best of times but considering the lack of creativity present in the title, I can’t see myself attempting to convince others that that this would be a worthwhile reason to gather round a single television. 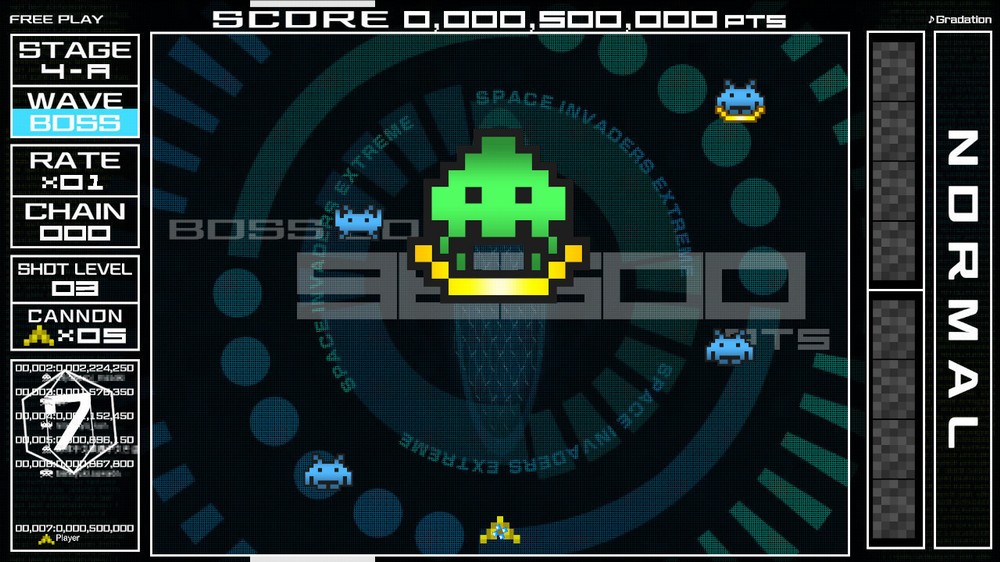 Arkanoid vs Space Invaders is a better use of your time, but it wears its mobile genesis heavily on its sleeve. Levels are short and plentiful, but with a level select screen that looks like it’s been pulled almost directly from something like Candy Crush, you can’t help but feel like sooner or later you’re going to be asked to cough up real money for extra lives, or that you’re suddenly going to run into an artificially-increased difficulty spike designed to drain you of your energy. From my time with the game I didn’t notice this to any real extent, but the thick bars that populate the side of the game-screen and the frequent requirement of in-game currency to purchase power-ups remind you that this was supposed to be played on something other than your TV.

Thankfully, the gameplay itself makes for a strange but interesting mix of mechanics that works out surprisingly well. Controlling the paddle familiar to Arkanoid fans, your job is to reflect the Space Invaders aliens’ projectiles back at them in order to destroy them. Rather than having a health bar for your avatar, there is instead an energy bar that essentially serves as a time limit. These limits can feel tough at times but being able to quickly jump in and out of levels means that you’re never punished too harshly for failure. There’s a large number of stages within Arkanoid vs Space Invaders should you find yourself engrossed in the experience, but I found that once I had finished a couple of chapters I had seen almost all that I wanted to see and couldn’t picture myself returning to this title time and time again. 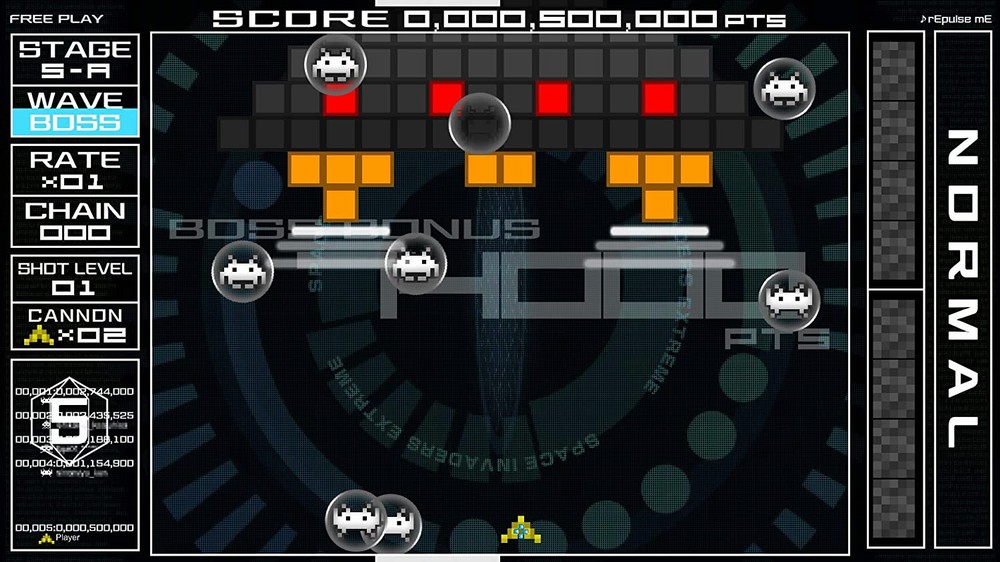 Space Invaders Forever is a strange collection in that it sits in a niche where the selection of games won’t be definitive enough for longtime fans of the series, but also is too peculiar to serve as a proper introduction for newcomers. It feels like a collection of B-Sides that no-one was really sure what else to do with, and it would be difficult to recommend this collection to anyone other than the most die-hard of fans. Space Invaders Extreme is easily the highlight of the package but isn’t enough to sell the collection on its own, and while Arkanoid vs Space Invaders is interesting for an hour or two, it soon loses its shine. Space Invaders Gigamax 4SE, though, is almost entirely forgettable and I can’t really see any players turning this collection on for the purpose of playing it. It’s difficult to think of a reason why this particular selection of games would have been compiled into a single release, and while there are some things to enjoy here, it is difficult think of many reasons to recommend Space Invaders Forever to potential players.