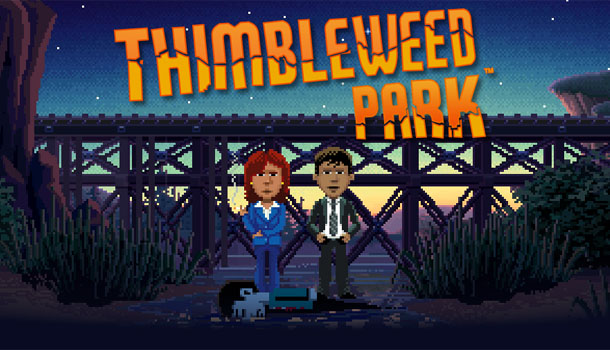 Thimbleweed Park begins its expansion on to new platforms today with its release on PlayStation 4 in North America and Europe. This Twin Peaks-esque adventure game from the original creators of Maniac Mansion and Monkey Island can be downloaded from the PlayStation Store for $19.99 (USD) or equivalent in local currency. https://www.playstation.com/en-us/games/thimbleweed-park-ps4/

Whodunnit? Now that’s a good question…
October 15, 1987. A dead body is rotting under the bridge, but the 81 (sorry, make that 80) inhabitants of Thimbleweed Park have bigger concerns. The town’s founder also died recently, under mysterious circumstances. The air is buzzing with signals. The hotel appears to be haunted. A giant slice of pizza roams the streets. And something sinister is going on behind the locked gate of the abandoned PillowTronics™ factory — something that could consume us all.

Two federal agents, a washed-up insult clown, an aspiring game developer, and the ghost of a pillow salesman have been drawn to this odd, rundown place. They don’t know it yet, but they’re deeply connected — and they’re being watched. Switch between them to explore the town, solve puzzles, and unravel the surreal mystery at the heart of it all. As you’ll see soon enough, in a town like Thimbleweed Park a dead body is the least of your problems.

Grand opening of the Thimbleweed Park arcade
Today’s PS4 release brings a new attraction to Thimbleweed Park: the formerly shuttered arcade is now open for business, complete with playable arcade games! Too bad someone forgot to fill the token machine. Are you clever enough to find a way to play?

Currently only available in the PS4 version, the Thimbleweed Park arcade will be added to all versions going forward, starting with Steam and GOG later this week. If you own the game, you’ll be able to update for free through the store where you bought it.

What’s next?
Thimbleweed Park will continue its quest for world domination in September with a Nintendo Switch release. It will also be out soon for iPhone/iPad and Android. If you’ll be at PAX West, make sure to swing by the Indie Megabooth, where the Switch and iOS versions of Thimbleweed Park will be publicly playable for the first time!