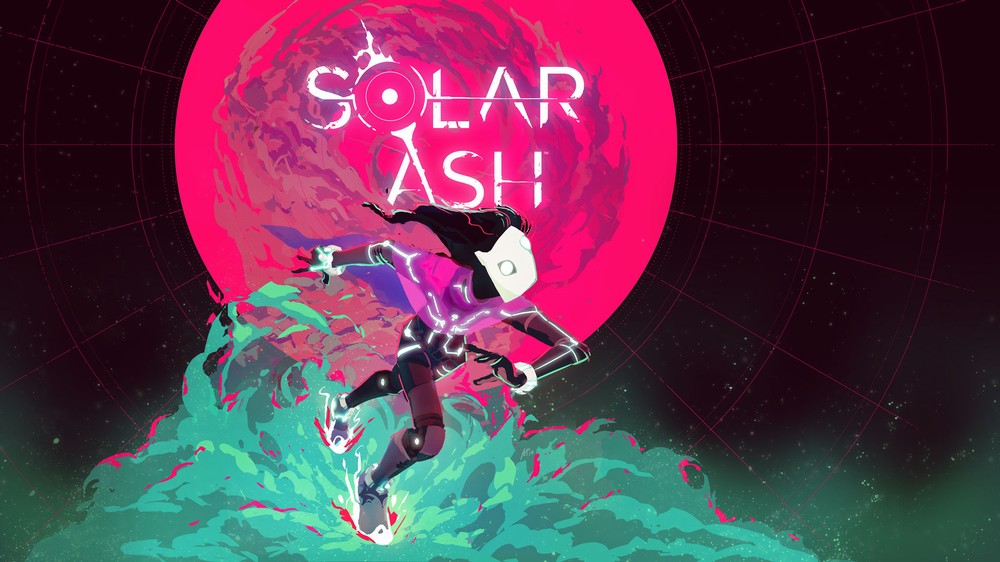 Solar Ash is a game about fucking up and trying to learn from your mistakes in spite of the ensuing frustration. It’s a game that no matter how mad it makes you, you’re bound to forgive it, partially because you’re intrigued by it, but mostly because it’s so nice to look at. Developer Heart Machine follow-up their freshman outing, 2016’s popular 2D dungeon crawler, Hyper Light Drifter, with a fast-paced, in-line skating puzzle platformer set in the same universe. In less capable hands, it’s a genre shift that would leave players scratching their heads, but Hart Machine makes it work. You can’t learn to skate without scraping a few knees. Solar Ash is no exception to that rule but look past the few scabs and scratches and you’ll see a game cruising by comfortably, with its eyes closed.

Players take control of Rei, a Voidrunner trying to save her planet from the approaching black hole, known as the Ultravoid. To do this, Rei enters the void to activate the Starseed, a giant sword-shaped beacon that has the power to close the black hole. Upon entering the Ultravoid, you are assaulted by the colorful worlds that have already fallen victim to the mass. Each of the six main biomes are breathtaking and heartbreaking all at once. The Crater area is engulfed in cotton candy clouds, surrounded by jagged purple cliffs, with your doomed home planet looming overhead. Each area feels unique and plays with the expectations we come to expect from a “Swamp” or “Lava” area. 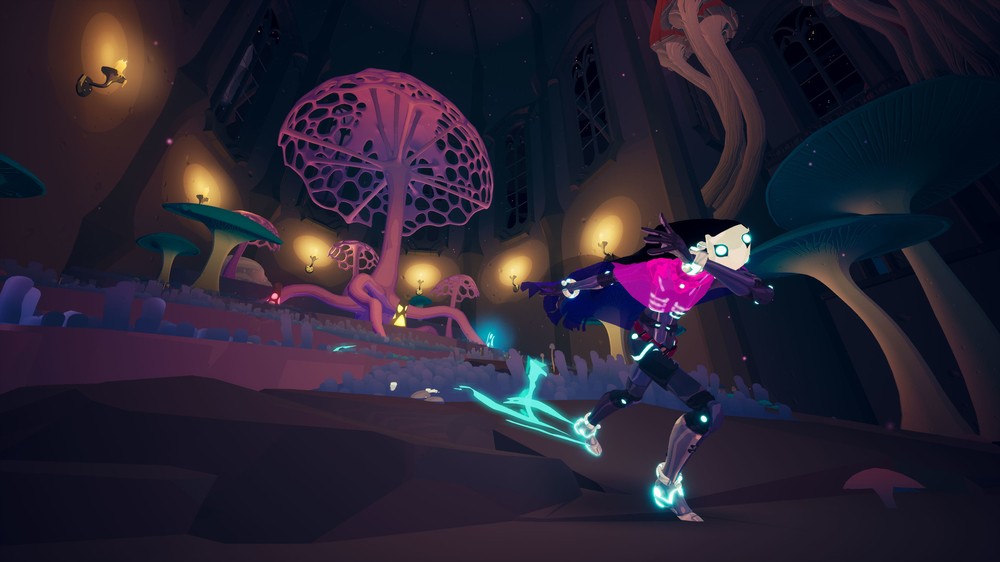 The laws of gravity have no say in this mysterious place. Survivors you discover on your adventure, like a lone warship captain looking for his crew or a member of the clergy looking for his elders, all share a sad reality. They are fighting to hold on to some kind of normalcy in an impossible situation. They bring some life to the void and play on the game’s themes of community, isolation, and moving forward.

Speaking of moving forward (I’m sorry), the main gameplay focus of Solar Ash is mobility and being able to traverse the world as fast as possible. Rei has the ability to skate across surfaces by holding the left trigger. She gets a quick boost with the right trigger. Movement is snappy and feels great. Even in moments when skating wasn’t necessary, I found myself skating anyway. The game is good about making you walk through important narrative moments and encounters in the environment, which makes me wonder why skating wasn’t just the default movement instead of requiring players to hold the left trigger to keep it activated. 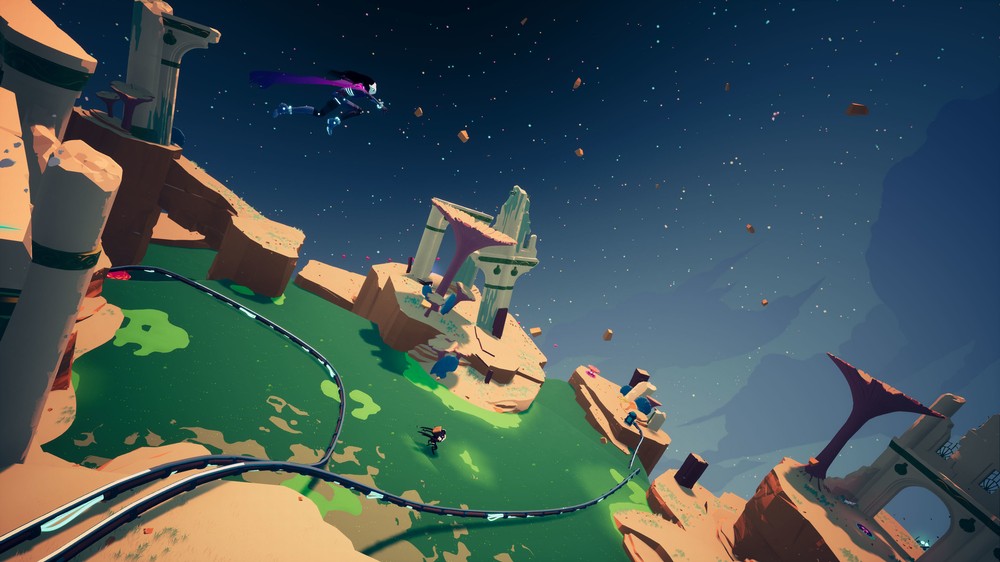 Skating around you’ll start to notice collections of black goo in each area. These hard to miss blobs are called Anomaly and you are tasked with destroying them to rile up an area’s enormous bosses. You destroy these Anomalies by hitting their weak points, indicated by a marker. These moments serve as puzzles that will test your skills. Each marker must be hit in a certain order under a certain amount of time. Failing to hit a marker results in the Anomaly dealing out some damage and resetting. From the start screen, you have everything you need to complete every puzzle Solar Ash has to offer.

There are no power-ups (aside from health upgrades you can buy and some new suits you can unlock.)  These puzzles will require you to skate, climb, avoid enemies, and explore your surroundings to solve them. That said, even with the know-how, some puzzles can still come off as frustrating. One specific one comes in the late hours of the game. This particular Anomaly, spread through an entire island, has you jump from one platform to another covered in goo, a jump that ended with me back on the ground floor many times and which forced me to restart the puzzle. 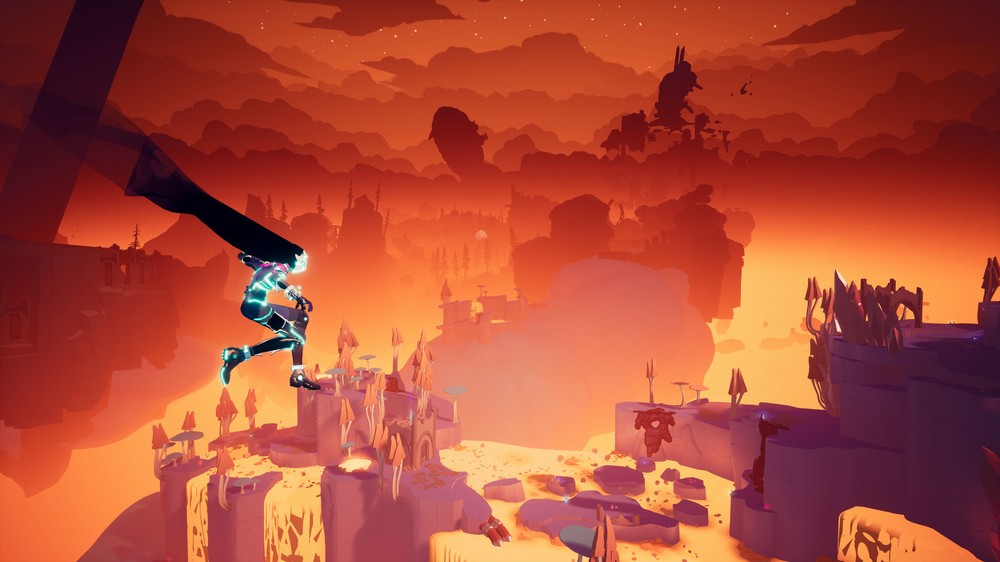 Once all Anomalies in an area are destroyed, you kick off the boss fight with the area’s Massive Anomaly. These creatures are huge and menacing. They vary from a giant air serpent to a giant sword wielding warrior. These fights play out similarly to the puzzles that preceded them. Rei hops around the backs of these beasts hitting weak points under a certain amount of time, all leading up to a final weak point that deals damage. Each attempt grows more difficult with spread out weak points, less time to complete, and less safe surfaces to skate on. Some of these fights can have moments that are just as frustrating as the regular puzzles. Weird angles jumping from different body parts can be a big source of frustration here. No matter their shortcomings, the Massive Anomalies do a great job of making you feel small and an even better job at making you feel big, once you’ve brought them down.

There are smaller enemies spread throughout each area that can be a minor annoyance but are easily taken care of with a few swipes of your weapon. There isn’t much enemy variety, but there doesn’t need to be. Combat was never the focus and limiting the types of encounters during your adventure sells that point. When not skating around or puzzling your way through goo, players can find notes scattered through the void and field reports from Rei’s lost colleagues. These field reports are emotional gut punches that detail the previous attempts of Voidrunners trying to stop the Ultravoid. They evoke the journals of Jeff Vandermeer’s Annihilation and somehow achieve a sense of wonder, hope, and isolation all in one stroke. Collecting all field reports in an area unlocks a new suit for Rei, which gives her an additional ability such as faster boost recharges or doubling currency pickups. It’s a nice added bonus on top of the narrative you receive from going off the main story path. 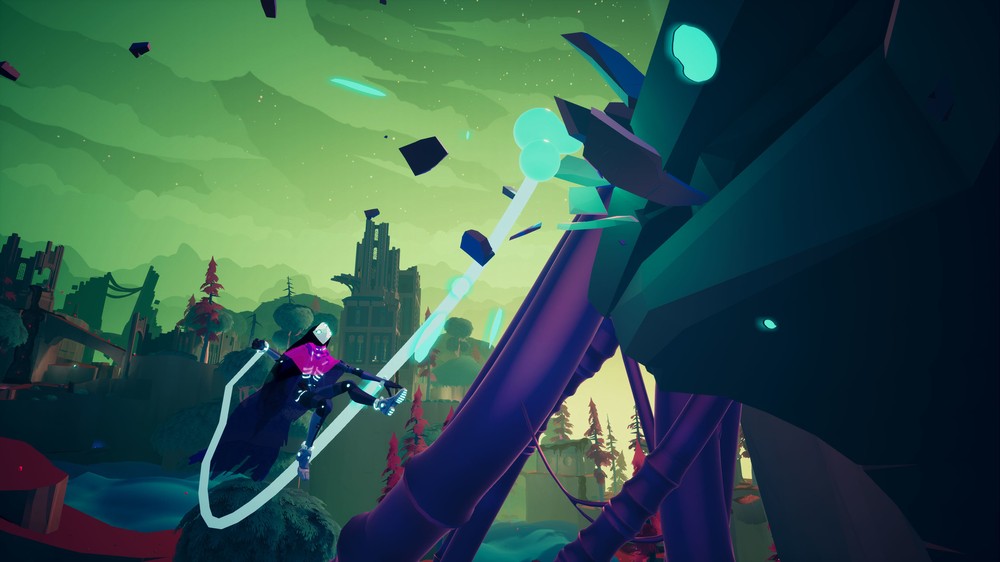 Solar Ash is not a long game. In my playthrough, in which I collected all of my colleagues’ field reports, I was able to complete it in just under seven hours. Some additional side-quests are available to help pad up that number, but if I’m being honest the game is a good length. It doesn’t overstay its welcome and it gives players enough to do outside of the main story.

Solar Ash is bleak and beautiful. Approachable and frustrating. Fast and reflective. It’s a game about failing and never giving up. Trying something new and not being defined by the old.  Entering the void but not being consumed by it. In an industry where Heart Machine could have added some bells and whistles and the number two to Hyper Light Drifter they decided to try something new. The result is a beautiful experience that has some scratches and bruising, but nonetheless is Hell on wheels.