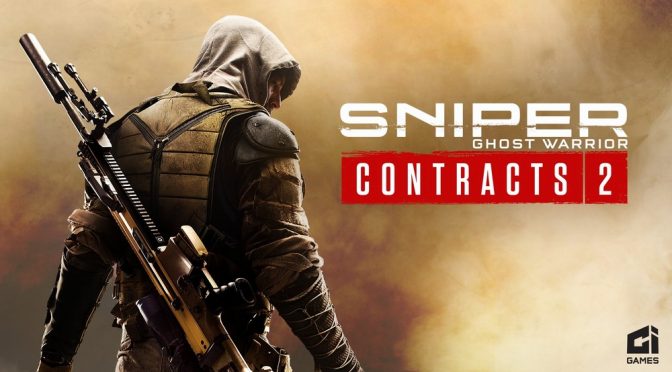 Last January I reviewed the original Sniper Ghost Warrior Contracts, and I came away from the experience more than pleased with this unique hybrid that seamlessly blended stealth and tactics with open-world design that allowed a certain level of autonomy to the campaign seldom seen in the genre.  As a former Army sniper I go into all these military shooters with a certain level of apprehension and skepticism, often to my own detriment, but I have learned to “lighten up” over the past few years because if games, especially sniper games, were anything like the real thing nobody would be playing them.

Jumping into Sniper Ghost Warrior Contracts 2 I was initially worried CI Games had merely reskinned the original, as the opening tutorial is identical to the first game, but once you get past those training lessons everything is fresh and actually quite impressive.  Everything about this sequel is bigger and better than before, as we gear up for a tour of duty in the Middle East; a place where I have spent a significant portion of my military career.  A satellite map shows the five areas of engagement that will unlock one by one as you complete previous missions, or should I say “contracts” 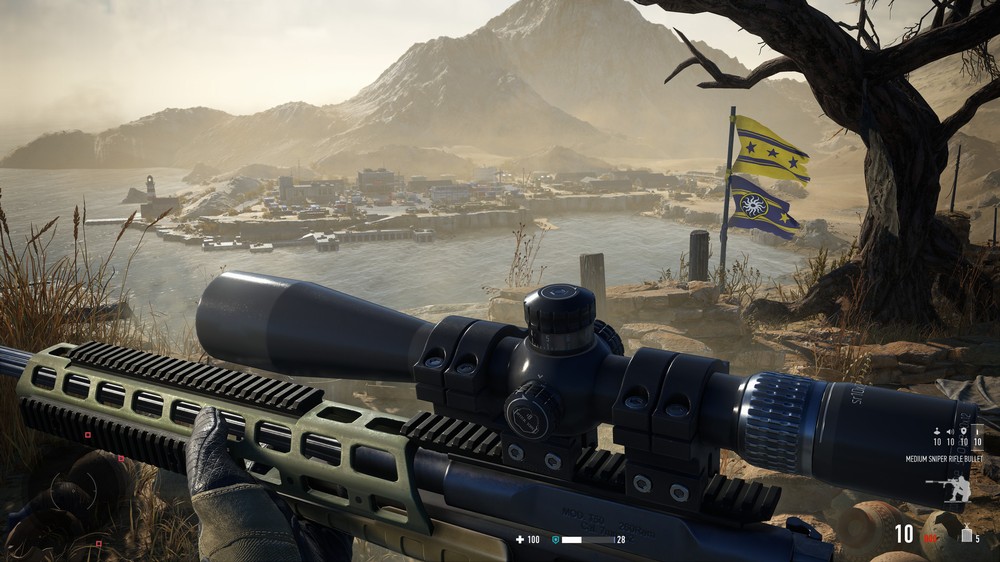 As a military sniper I don’t have the luxury or freedom that mercenaries enjoy like picking out my targets and getting a fat check for each confirmed kill.  I also don’t get to make a game out of how elaborate my approach to each scenario will be.  I’ve recently been playing the Hitman games and there are a lot of similarities to the overall game design, a design that encourages multiple replays of each mission to check off these optional goals or challenges to earn extra cash.  Imagine if Seal Team Six had been told to kill Osama bin Laden but ONLY while he was sitting on the crapper.

Each engagement area has multiple contracts and multiple methods/rules/restrictions to complete those contracts.  For the most part the contracts are laid out in a somewhat linear path across the regional map, but you are always free to do them in any order you choose.  Fast travel points will unlock as they are discovered, allowing you to bounce around the map as long are you aren’t in combat or attempting to exfil.  You are free to “bank” your progress after each contract at an exfil point then return to the map to complete any other contracts. 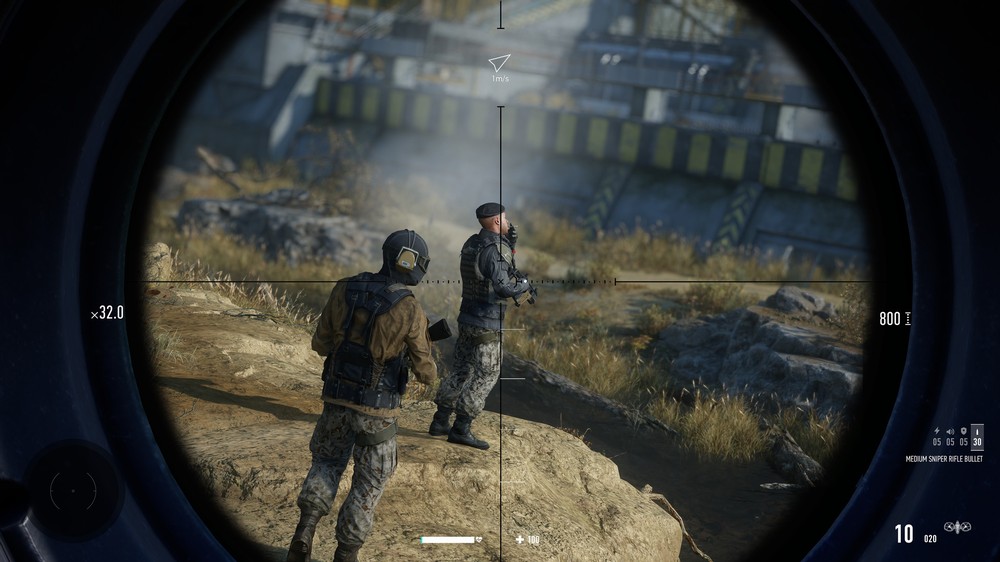 Sniper Ghost Warrior Contracts 2 has plenty of cool weapons and high-concept gadgets, most of which are not real but still fun to imagine.  I would have loved an augmented reality mask that overlaid waypoints and distances to targets on my helmet, and that magic dot on my sniper scope that calculates bullet drop and wind shear would turn any average Joe off the street into an elite sniper.  Thankfully, you can tailor the game’s difficulty and challenge at the beginning of each mission; a nice change from most games that globally sets the difficulty in the options.  You can   choose from Marksman (easy), Sharpshooter (normal), Veteran Sniper (hard), and Deadeye (realistic).   I played the first two contracts on Sharpshooter and found the entire thing way too easy.  Veteran removes that red dot from your scope forcing you to actually use real-world sniper practices for calculating bullet trajectory while Deadeye removes that dot and most of the other incidental items on your HUD, truly immersing you in the combat as you face off against even more alert and aggressive enemies.

Before each contract you’ll get to suit up with a variety of weapons and gadgets; some of which are available from the start, but most of the good stuff will need to be purchased and upgraded between missions with your earnings.  You get one sniper rifle and a secondary weapon for close combat and a sidearm.  With the exception of the heavy sniper rifle and a few secondary weapons, most guns can be equipped with a silencer, which is nice if you prefer a stealthy style of play.  Most guns have multiple points of upgrades such as barrel, magazine, sight, etc. and you can also choose from frag, smoke, and flashbang grenades.  You are free to pick-up and use weapons from your kills, but I mostly kept my initial starting gear and looted bodies for fresh ammo.  There are also ammo stashes scattered about, so running out of ammo isn’t a serious issue, and you can always upgrade so you can carry more if needed. 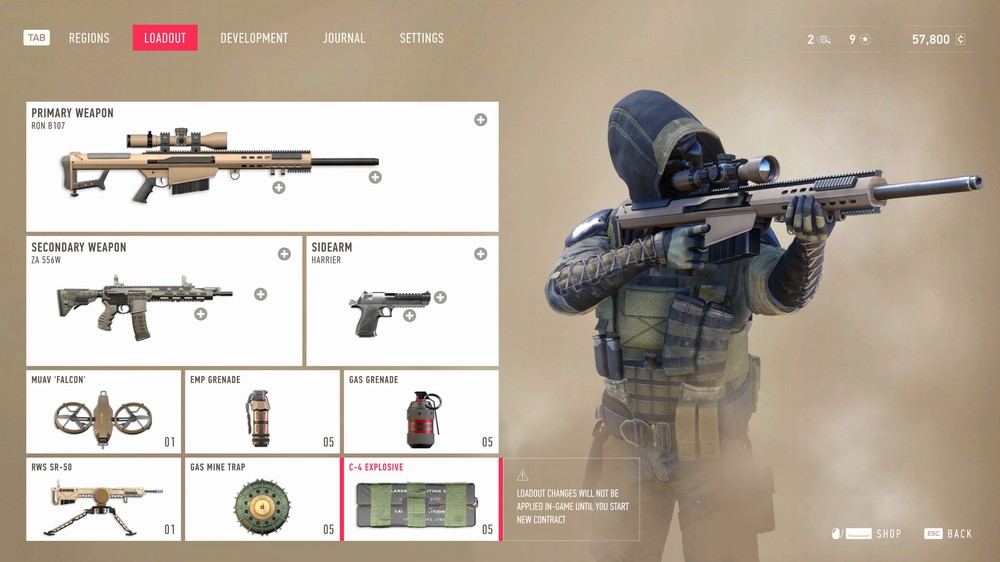 There is a level of personal development that lets you spend a secondary currency based on your experience to unlock various perks and bonuses on multiple tech and skill trees; stuff like vision enhancements, stealth boosts, bonuses for drones and turrets, and general perks for gear and gadgets.  I’ve always been a big fan of drones when utilized properly like in the old Ghost Recon games, but I went through almost this entire game without using a drone; often simply due to a lack of incentive to do so, but even more often because the enemy has anti-drone turrets placed around just about every location you might want to use one.  I’m sure there are some drone challenges buried in the optional contract modes that will have me flying around using poison darts and EMP bursts, but they just aren’t encouraged in the initial playthrough.

Throughout the game you will always have your handler giving you updates and guiding you along to your next objective.  I actually enjoyed the banter and it helped to ground me in a world that would otherwise be mostly silent and depressing.  You do get to eavesdrop on enemy conversations, many of which are quite amusing, and some even useful when you can sneak up on a soldier and interrogate him at knifepoint.  Some soldiers will give up their comrades locations and others may point you to a weapons stash, and others will tell you to “go to hell”, but they all end up dead whether they help or not. 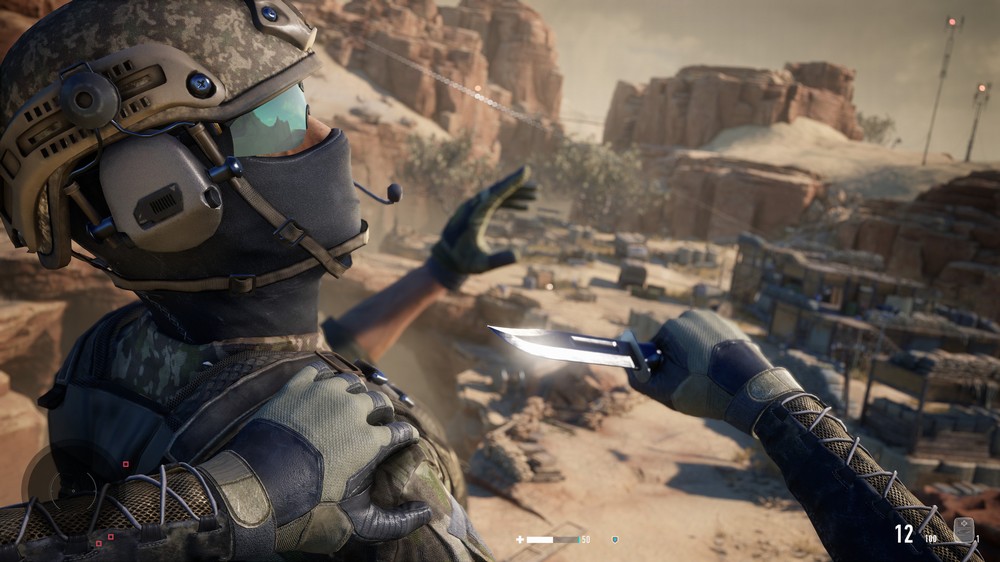 So with five areas and 21 contracts there is a lot to do in this game; even more when you realize that each contract has numerous challenges associated with them that will hopefully entice you to replay using a different approach.  One interesting element that carried over from the first game are Bounties, special targets that will randomly activate offering you a bit of a side excursion for some bonus cash if you can kill them and retrieve their intel.  Expect a solid 15 hours to simply finish the campaign and probably that many more if you want to get 100% on all challenges.

Sniper Ghost Warrior Contracts 2 plays equally well with keyboard and mouse or a gamepad.  The precision of the mouse is undeniable, especially when playing on the more difficult skill settings that limit aim assist.  Weapons are easily swapped with a button press and you can bring up a standard weapon wheel to equip a primary item like a med kit, grenade, or tech item like a drone or turret.  I particularly enjoyed the way you can swap ammo types with a simple button press while looking through your scope, yet it still requires a magazine swap.  Special bullets include armor piercing for the heavy brutes, agile bullets that are immune from bullet drop and wind, and distraction bullets you can use to lure and separate soldiers. 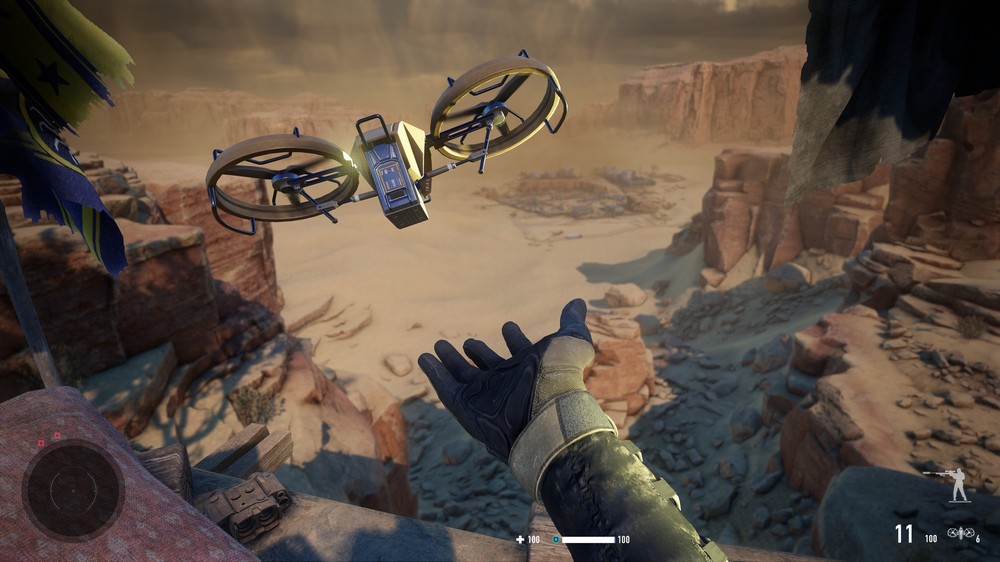 For 95% of the game the experience was perfection with outstanding visual fidelity, realistic lighting, shadows, textures, and a rocksteady 60fps running at 4K on my RTX3090 card.  The only time performance faltered was near the end of the game during a palace infiltration.  Arguably, this level had some of the most complex architecture and textures in the entire game, but framerate would often drop, textures were late to load in, and during the final contract execution the game would crash back to Steam repeatedly; over a dozen crashes until I lowered my resolution to 1440p.  I was then able to reach the exfil point and finish the mission.  I immediately reset my resolution back to 4K and played the final region with no problems, so there is definitely something about that one level/mission.

The audio is fantastic with immersive environmental effects, lively com chatter, and great effects for all the weapons and gadgets.  Of course the most impressive moments of the game are when those dramatic bullet-cam sequences trigger, allowing you to see the bullet exit the barrel in a cloud of smoke and fly toward your target in slow motion with bullet spin and sometimes crazy camera pans or vertigo spins until the bullet hits your target often resulting with thick blood splatter, brain matter, helmets popping off…you get the idea.  It’s not as gross as the Sniper Elite franchise that goes full X-ray with organs and bones, but this finds the right balance for bloodthirsty snipers.  There is even some extreme dismemberment for victims of explosions that is shockingly real, especially when you get up close to loot their torso. 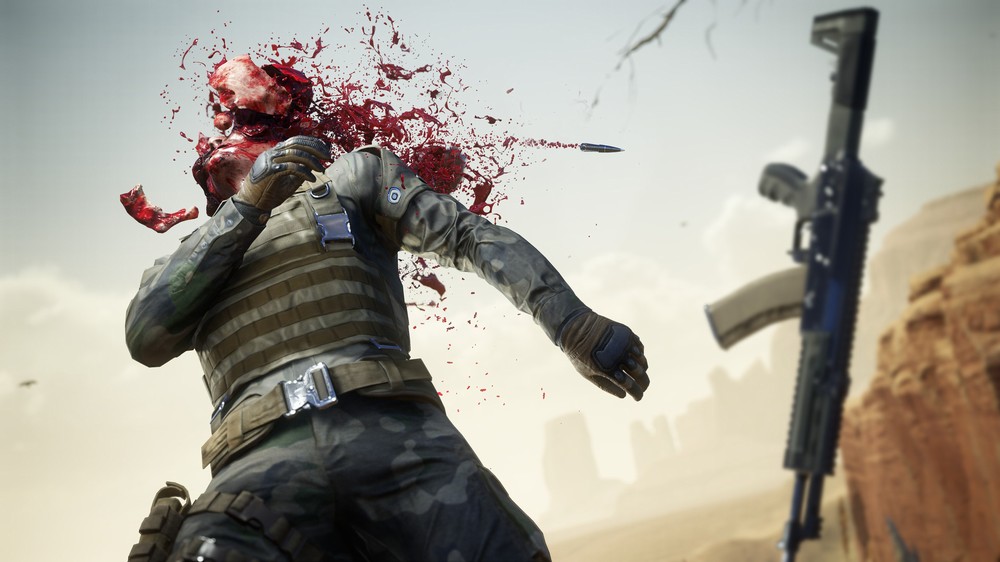 I was surprised to see that Sniper Ghost Warrior Contracts 2 was only $40, a nice price for a great game, and then I saw the $85 worth of DLC being offered; mostly cosmetics and a few weapons and even the soundtrack, which I didn’t find particularly memorable outside the game.  Considering this game is not multiplayer and nobody else is seeing you or your guns I can only roll my eyes at anyone who would pay to paint their guns.  I only found a half-dozen camo upgrades during the course of my 18 hours playing the game, but they offer no tactical or stealth bonuses for equipping certain skins on certain levels; now that would be cool and useful.

Shameless DLC aside, Sniper Ghost Warrior Contracts 2 is a fantastic, fun sniper game that is bigger and better than the previous with a significant boost in game design and technology that makes the most of CRYENGINE and scales nicely with a variety of PC hardware.  Even the game’s difficulty offers a nice scalable solution that will appeal to newcomers as well as salty veterans such as myself.  It might not be the most realistic sniper game ever made, but it is certainly one of the most enjoyable and will keep you coming back for more. 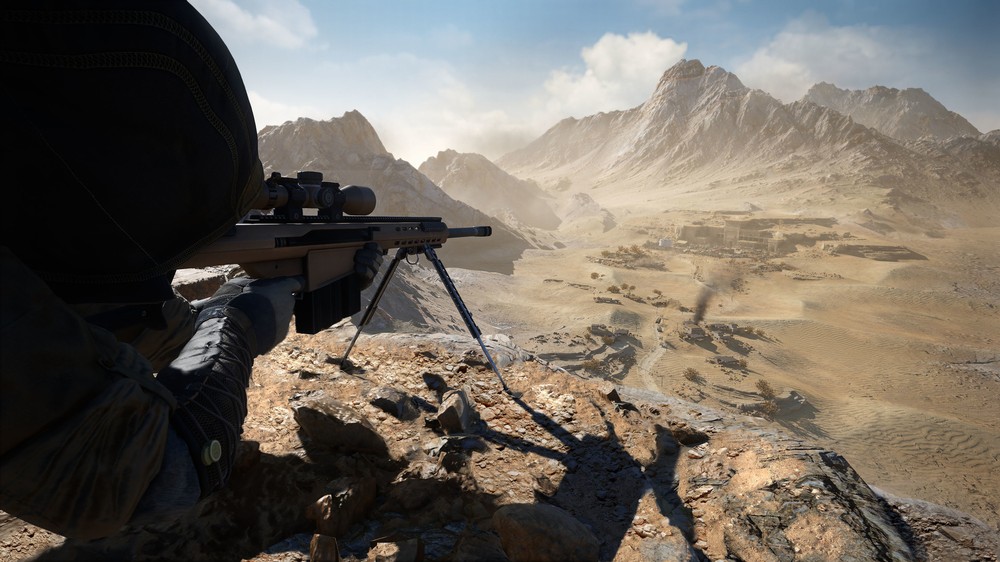 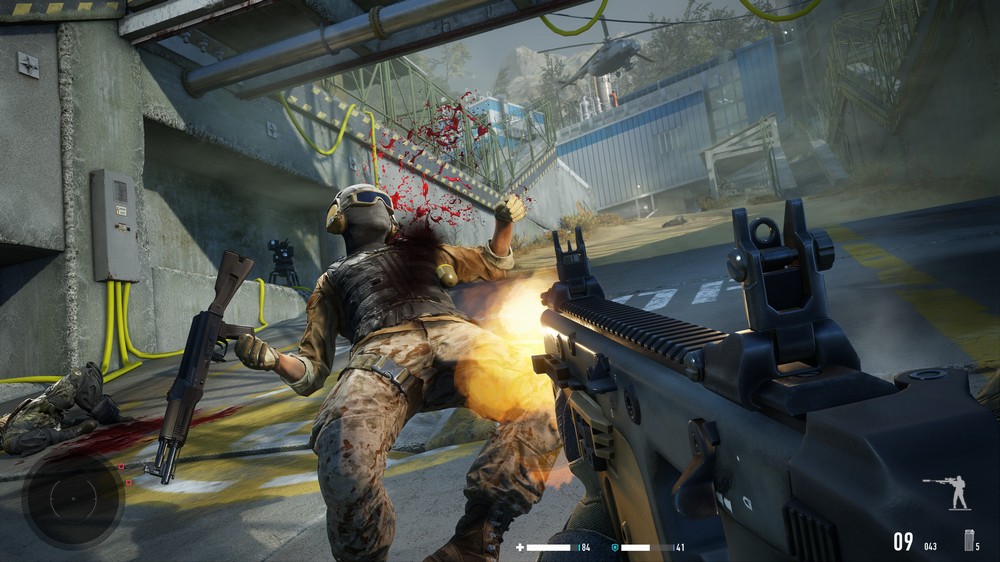 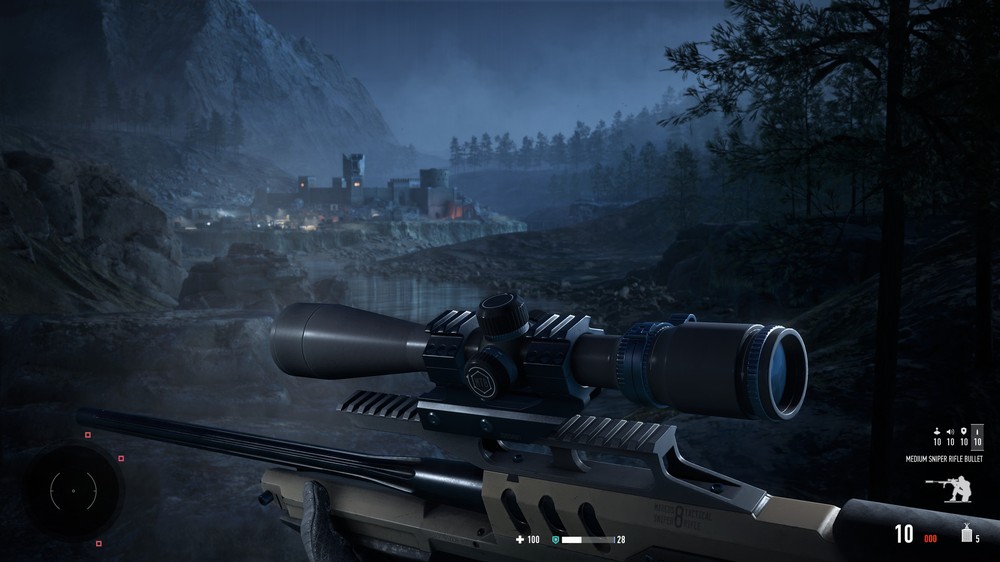