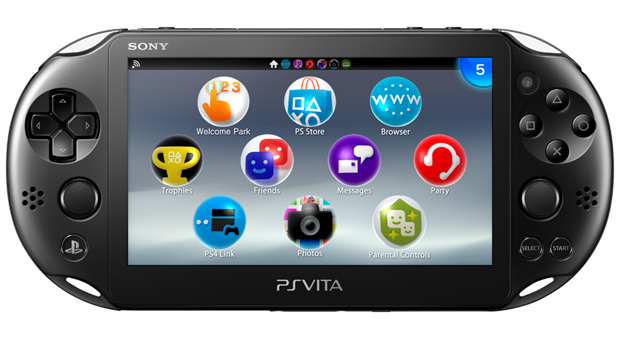 Lineup of Over 100 Games Heading To PlayStation Vita in 2014, Including God of War ® Collection and Minecraft

The new PS Vita model comes with a redesigned architecture that is approximately 20 percent slimmer and 15 percent lighter than the original version, with new rounded edges that makes the system even more comfortable to hold. Incorporating a 1GB internal memory card, the new model makes it possible to enjoy games without purchasing a separate PS Vita memory card*1. The battery life has also been extended to four- to six-hours of game play (from three- to five-hours in the current model) and approximately seven hours of video play (from five hours in the current model). In addition, a high-definition liquid crystal display (LCD) has been adopted for the new system, delivering vivid and crisp visuals that PS Vita games are known for.

“PlayStation Vita is poised for a strong year, and introducing the new model is just the start.” said John Koller, vice president of platforms marketing, SCEA. “With an array of great games like MLB 14 The Show and The Walking Dead Season Two adding to PS Vita’s huge catalog of games, as well as our strong indie lineup and the ability to play PS4 games through Remote Play, now is the perfect time to be a PS Vita owner. In addition, PlayStation Now will expand the gaming library further by allowing PlayStation 3 titles to be streamed to PS Vita when the service launches later this year.”

Content for the PS Vita system is stronger than ever with more than 100 games planned for the system this year, including:

Support from independent developers remains strong on the PS Vita system, with upcoming titles including: