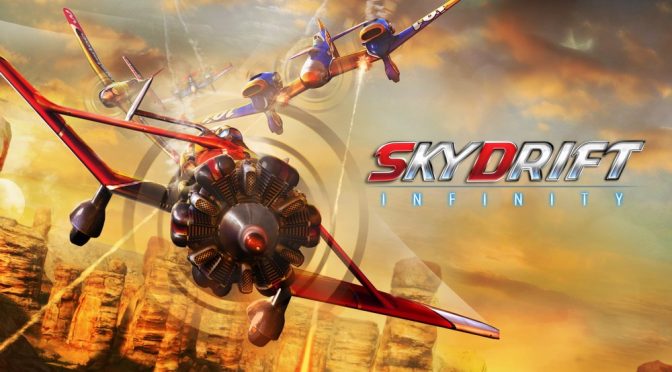 I would have bet money I had played the original SkyDrift.  I distinctly remember racing airplanes around cool environments collecting power-ups, but Steam assures me that I do not own the original game that released back in 2011, so it must be some other air-racing game or maybe I played it on Xbox 360.  Now, ten years later Digital Reality and HandyGames are back; not with a sequel but merely a juiced-up remaster of the original with SkyDrift Infinity. 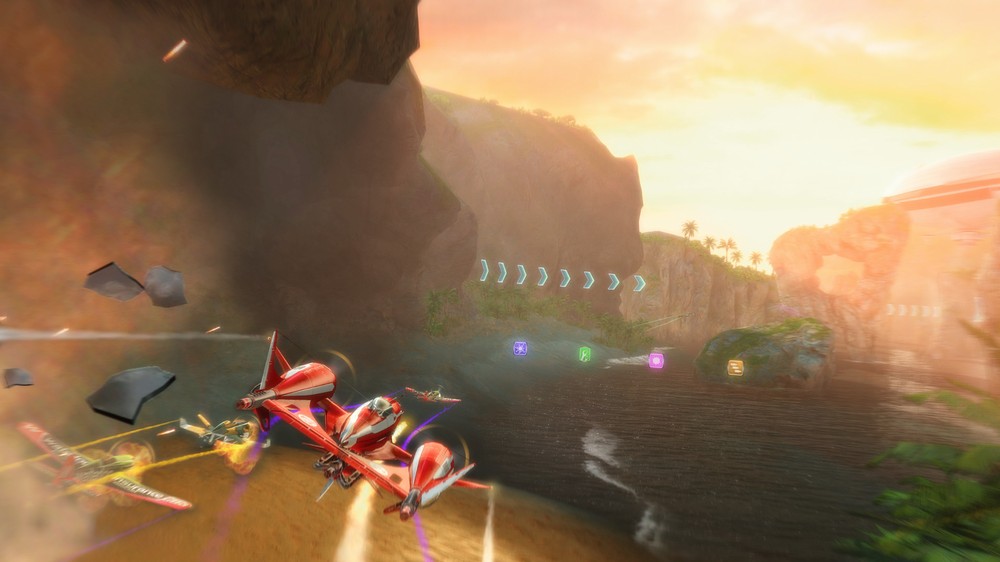 For those who already own the original and are wondering if you should spend even more on what is essentially the same game, SkyDrift Infinity adds one new track, some fancy new aerial maneuvers, and 2-4 player split-screen for local multiplayer that also supports Remote Play Together, so you can invite friends to play that don’t even own the game.  Other than being able to now unlock the framerate there are no new graphics enhancements, so what you saw in 2011 is what you see today, which is still really good but starting to look a bit dated.  I was surprised to find no 60fps mode; just Unlimited or 30fps, and you can’t even select your screen resolution.  While these improvements are nice and all it seems like most of this could have been implemented with a free update patch of the original game and perhaps a paid DLC for the new track.

SkyDrift Infinity offers several ways to play including a standard Campaign with multiple tiers of race events in which you must complete to unlock additional tiers.  There are six courses set in very unique environments like a ship graveyard, volcano, snowy mountains, desert canyons, and a tropical island.  The courses are also reversed to offer a bit more diversity in your racing levels.  While the AI is impressively challenging in the single-player game those looking for a human challenge can head online for 8-player racing or keep the fun on your couch with 2-4 player split-screen. 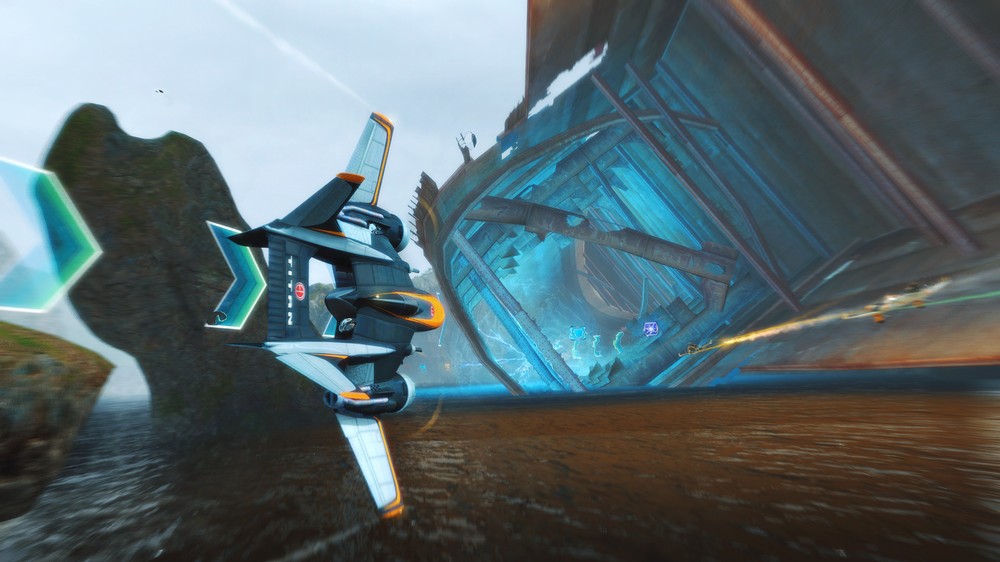 There are five race modes that switch up during the campaign or can be selected for multiplayer.  These include Power Race which is standard racing with power-ups that shield and repair your ship or temporarily add machineguns or lock-on missiles or maybe mines or an EMP weapon that will disable any nearby planes.  If you get a power-up you don’t need or simply need to go faster you can convert your unwanted power-ups to booster fuel – the amount of fuel is determined by your current position in the race.  Speed Race mode is a no-weapons race that can get insane as you try to pass through a series of rings, each increasing your speed faster and faster until you are literally flying out of control.  Survivor mode is that classic “knockout” favorite where the plane in last place at the end of the timer is removed from the race until there is only one plane left.  Deathmatch and Team Deathmatch modes are also available, taking the planes out of their linear course environments and putting them into one of two incredible air-battle arenas where you scramble for power-ups and rack up the highest scores in the time allowed. 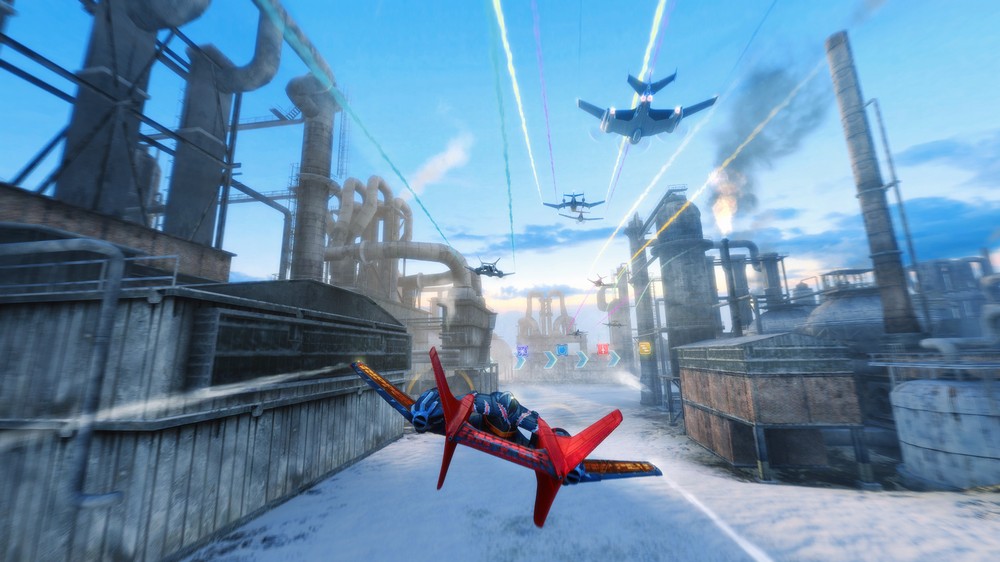 There are 16 planes to choose from, each with unique looks and attributes for speed, maneuverability, armor, etc.   Most of the planes are locked at the start and become available after you achieve certain milestones in the game.  Additionally, each plane has multiple skins that are also unlocked through gameplay, and some of these are really cool.  There are some fun designs like an old tri-plane and this wickedly cool design inspired by the Darksiders video game.  This plane was unlocked for me at the start, so I’m not sure if SkyDrift Infinity detected some Darksiders info on my Steam account and rewarded me – the other person I was testing this with did not have this plane available and had not played Darksiders.

SkyDrift Infinity can best be described as “Mario Kart in the sky” with the winding courses and numerous power-ups generously scattered about the track that always keeps the game in a total state of unpredictable chaos.  It also lends itself to a bit of strategy, like when you finally achieve first position and realize that weapons (other than mines) are useless and you need to load up on shields and repair icons and convert everything else into boost.  There is nothing as intense as hearing that lock-on beep of an approaching missile as you try to race it to the shield icon just ahead.  Navigating the tracks requires time and memorization, learning which of the multiple paths is shorter, faster, or has more power-ups, along with mastering the knife edge technique to slip through narrow gaps or make sharp drifting turns in tight canyons.  Skimming the surface is also another useful tactic in filling that booster gauge. 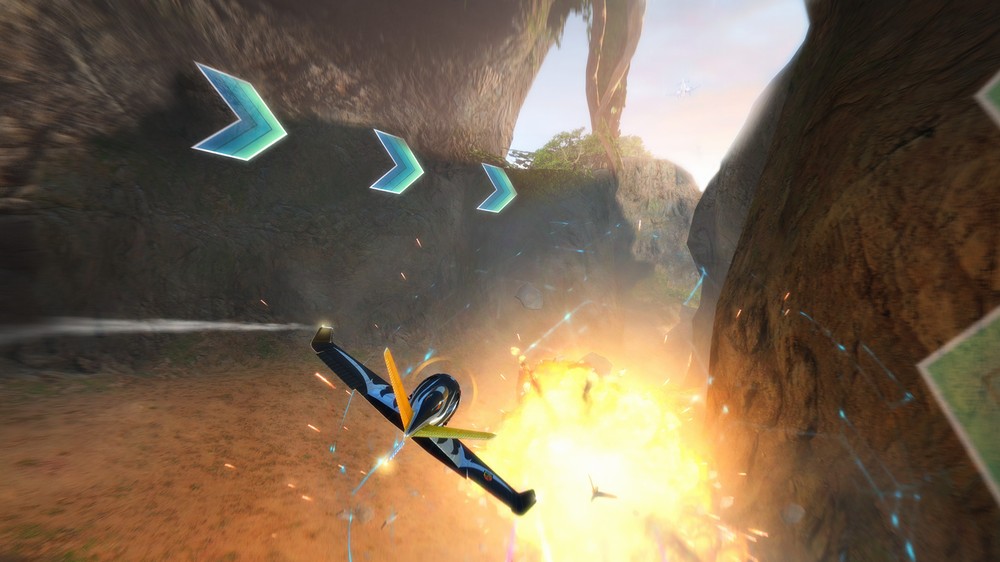 While I thoroughly enjoyed the Campaign mode the multiplayer seemed a bit awkward actually.  You have the Quick Match and Multiplayer along with Custom matches where you can select courses and race modes.  You’ll need to use the Steam interface when inviting friends into your game, which is fine but you must REINVITE them every time you want to change any element of the race.  The game forces you to leave the lobby to change tracks or modes, and then you have to hit RB and click invite on anyone who wants to play.  The only thing you can change without losing your lobby is your plane.  This is a super-annoying way of doing things that really detracts from the pacing and flow of the game; unacceptable in 2011 and totally unacceptable in 2021.  There was also no way to simply team up or create a party and then go into the main online mode and race with strangers for a complete 8-player experience.  Honestly, outside of the testing for this review I doubt I will ever play the online multiplayer ever again just because of these oversights.   Thankfully, the co-op and Remote Play Together work much better and still offer that multiplayer fix as long as you don’t mind split-screen gameplay. 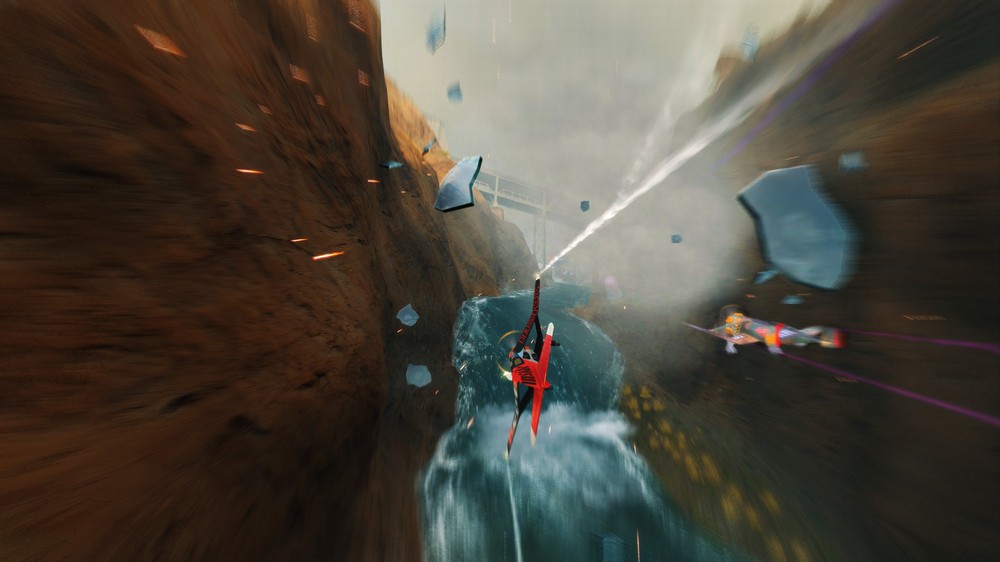 For someone who has never played the original then SkyDrift Infinity is certainly a more enticing proposition even if it is relying on ten year old tech and game design.  For those who already own SkyDrift there has still been no official word on a discount or upgrade price, so you might have to pay another $10 for this new content.  It seems a bit anti-consumer to ask for a double-dip purchase on what is essentially a single track and some very minor improvements, especially since the original SkyDrift already has a 60fps user mod available.

I love racing games, especially air-racing games, and SkyDrift Infinity is awesome fun alone or with friends or strangers.  Despite the dated visuals the game still holds up today and will likely run on most any operational gaming PC.  In addition to PC/Steam, SkyDrift Infinity is also available on all three consoles as well, but there is no cross-play so don’t go looking for an expanded community like the recently released Crash Drive 3.  For only $10 ($15 on console) those new to SkyDrift are going to find a great game for a great price.  With all the action and replayability of a Mario Kart game combined with the new split-screen modes, prepare for some insane aerial racing and combat unlike anything you’ve experienced before. 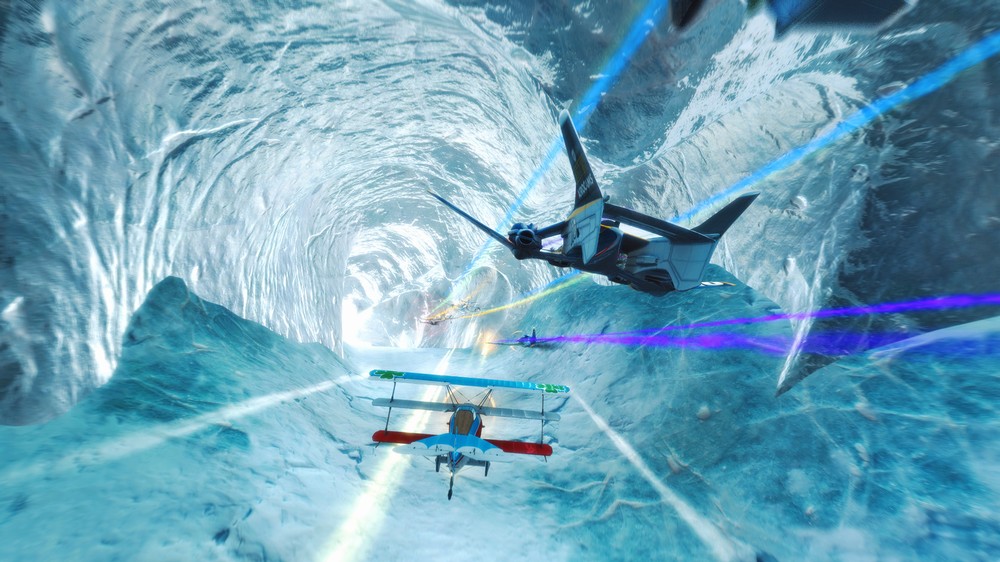 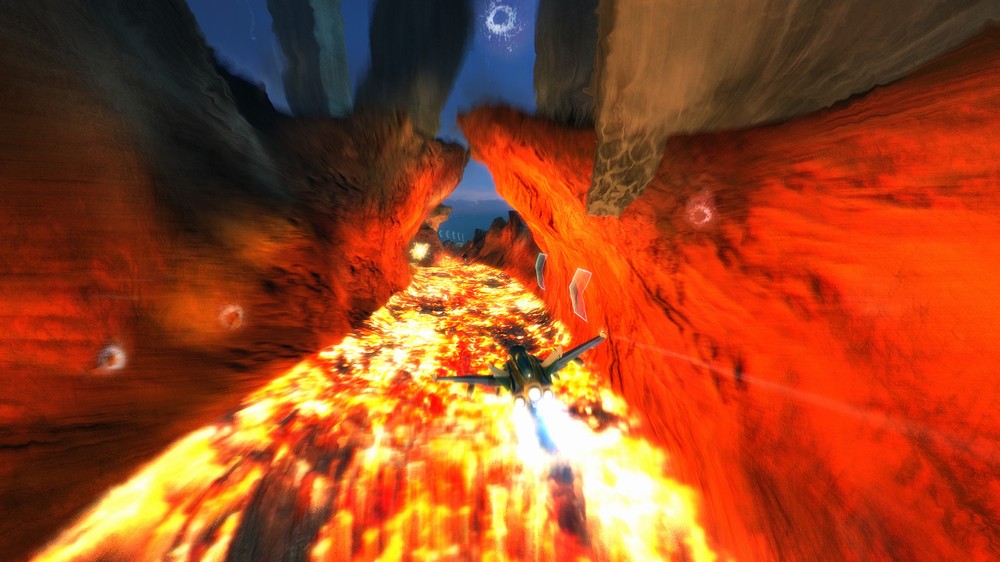 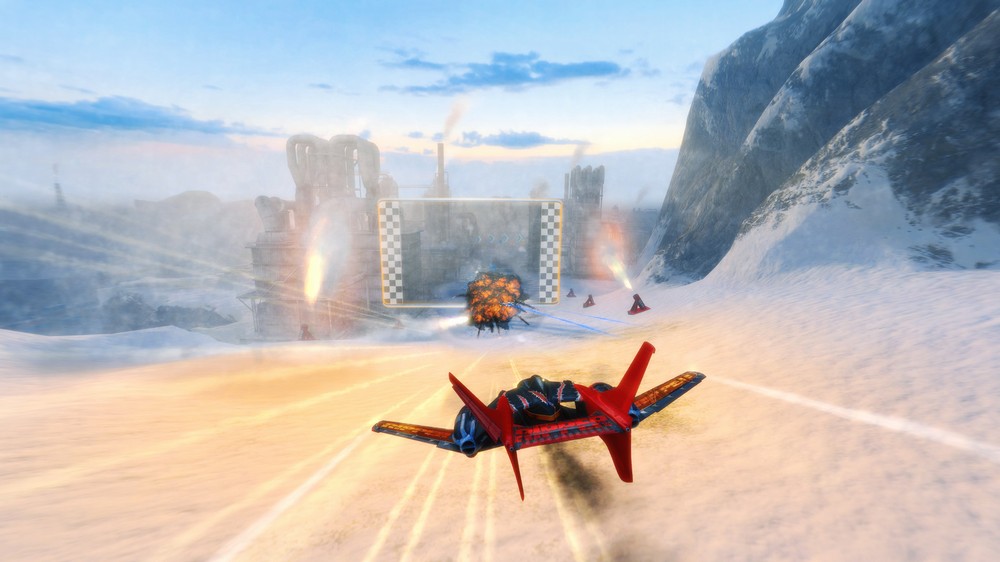