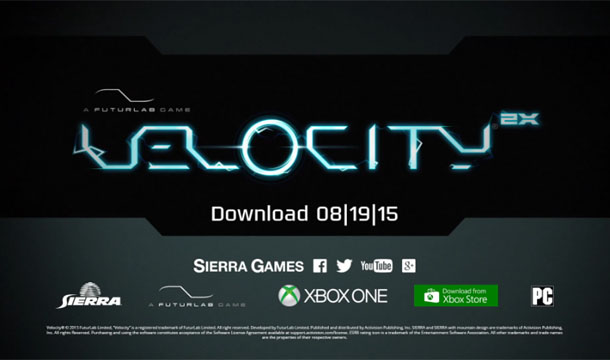 Today Sierra™ released the first of two behind-the-scenes videos with indie games studio FuturLab exploring the development of Velocity® 2X, the acclaimed arcade shooter coming August 19 to Xbox One and Windows PC for $9.99.

Velocity 2X presented FuturLab with a daunting narrative challenge: how to tell an interesting story in a game driven by pure action and speed. The team had to strike a fine balance between ambition and pacing, progressing ace pilot Lt. Kai Tana’s fight for freedom against her alien captors meaningfully without slowing down the experience. They then drew from 80s sci-fi classics to design the many bold characters and worlds at the heart of that tale. The result is a universe with an energy all its own.

Velocity 2X will launch on August 19 as a digital title on Xbox One through the Xbox Games Store and Windows PC via Steam. These editions will feature over 50 fine-tuned levels of electric gameplay, a new special daily challenge mode for speedrunners, and all the bonus content from the Critical Urgency and Dual Core DLC packs from the title’s original release on PlayStation® systems.