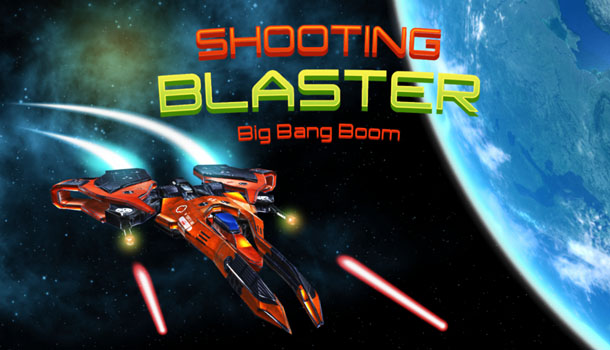 Sometimes it’s fun to go back to the simpler times of gaming when you visited an arcade and dropped hours and quarters trying to get a little farther in the cabinet of your choice. This is exactly what I felt like when I sat down and launched my first venture into Shooting Blaster Big Bang Boom for the PC. This shoot’em up/bullet hell game instantly reminded me of games like Asteroids with a touch of Ikaruga mixed in as you try to reach Earth to reclaim it from alien control.

Shooting Blaster Big Bang Boom takes the concept for Asteroids and intensifies the action by focusing more on the ships than rocky debris. Players are confined to a single screen in space with both debris and enemy ships emerging from outside its borders. Much like the player’s ship, the enemies will have various weapons from the eight different options available. Players start with the Standard Gun with only 100 rounds to take out their first target. Unless the first ship you encounter is a capital ship then this us more than enough to get you started. 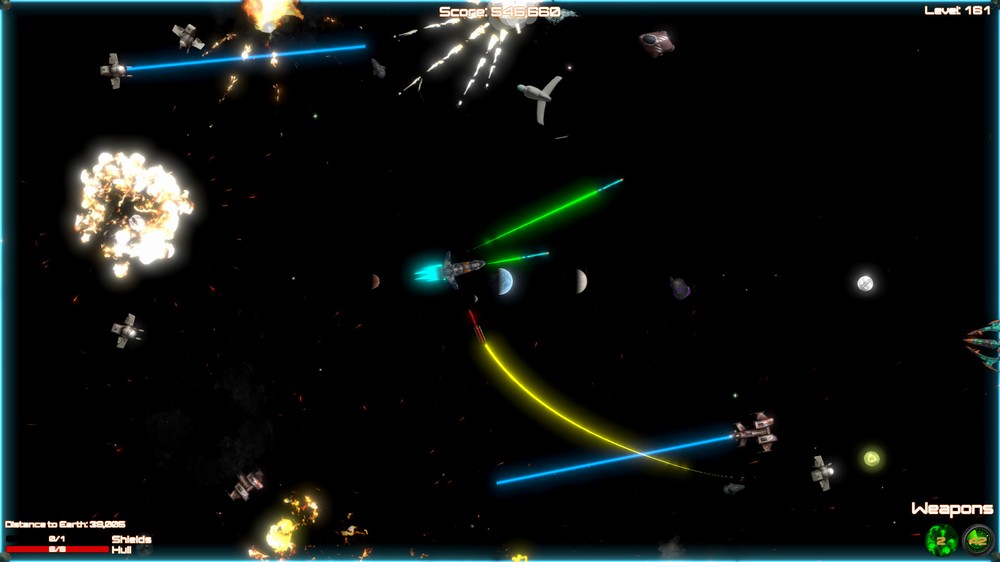 To add even more of a challenge you start out with the XP Gunboat, first of six ships, with no shields, very little health and no nuke support. For those brave enough to persevere you will earn a new ship every 20 game levels culminating with the DDS Corvette. With each new ship you gain more base health, a shield, nukes and a reduced rate of fire delay. Depending on the ship though your ability to maneuver will be vary as the Corvette while more powerful moves and turns as a much slower rate than say the Omega Fighter.

Control wise there is two main ways to play Shooting Blaster Big Bang Boom. The default method is with the keyboard/mouse combo which while not the most fluid option gave me the highest survivability rate for much on my play sessions. For those that favor a controller, you may feel right at home with this option but a little tweaking of the controller configurations may be needed to get the controls to work correctly. Thankfully SRM Games has made changing these options in Big Picture Mode or the game’s Properties easy to find via the Discussions or the manual available on their website (https://srmgames.com/#games). 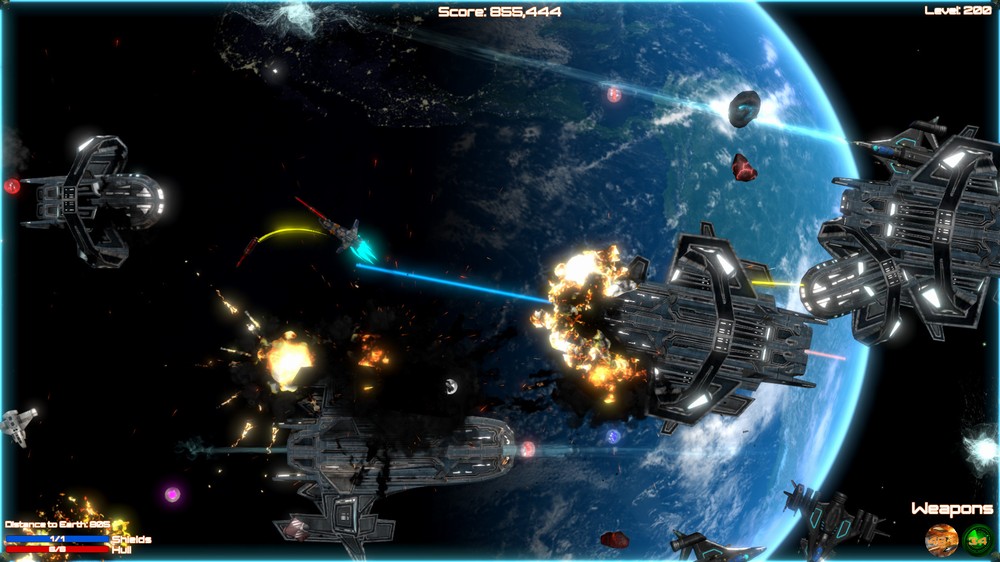 After a bit of configuration tweaking the game will operate perfectly with a controller which really does help when it comes to ship navigation as the analog sticks are a lot smoother than using the WASD option of both steering and adjusting the thrust of your ship. This is important as you cannot stop your ship entirely as you can only just slow it down to a velocity of 1. After a little trial and error I eventually realized that both analog sticks did exactly the same thing despite the in-game’s color coded layout saying otherwise.

This also brings up probably the only real issue I have with the controller option. Even after you get the problematic controllers to work the weapon fire button is default mapped to the A or Cross button depending on your gamepad choice. For those that have to use the SRM guided workaround you can actually configure the triggers to act as your fire button as well if you so choose. Doing this method I had a much easier and comfortable control scheme for both my Xbox and Astro C40 controllers. 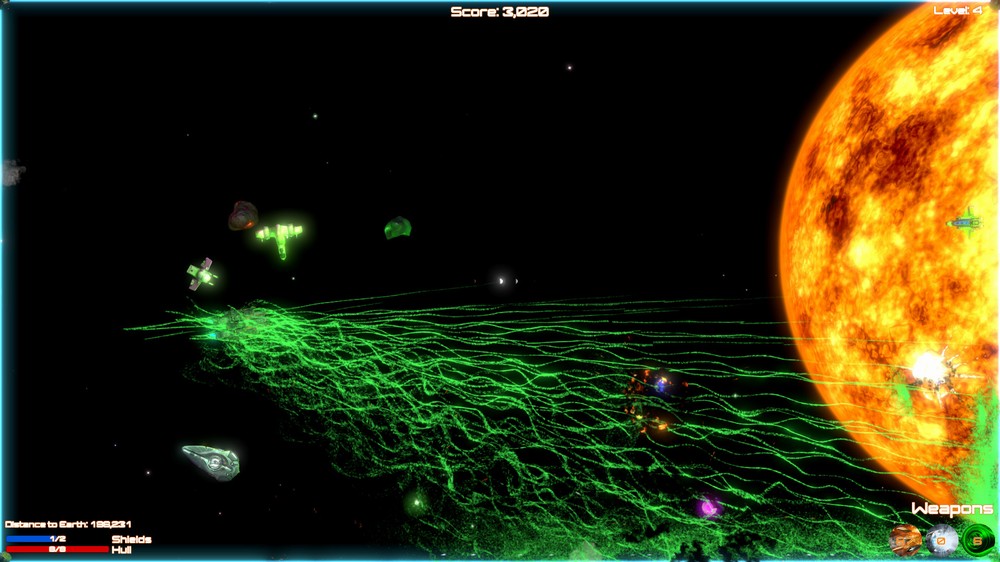 Once you get past the controls you’ll find a rather enjoyable if not downright chaotic at times experience. Shooting Blaster Big Bang Boom pulls no punches as everything on the screen minus the background is out to kill you. Yes even the border. The enemy thankfully fires at half speed compared to yours but that doesn’t mean you can slack off. All weapons have an ammo count so continuous fire is not encouraged. You can opt for auto fire in the options but you run the likelihood of wasting more powerful weapons this way unless you constantly pick up more of the same powerup type.

The weapons in Shooting Blaster Big Bang Boom are all pretty fun to use though some take a little more skill to use. My favorite is the fire-and-forget homing missiles though I rarely turn down the opportunity to use the Plasma Shock. That little baby creates temporary black holes that can suck powerups close to it which can greatly help you (or not) at times. One of the nice features of Shooting Blaster Big Bang Boom is that as you progress I noticed that some weapons had a higher or lower chance of dropping. The Standard Gun has less effect in the endgame so it doesn’t drop as much for instance.

Players can also make their battle a little easier as well by disabling the Border Kills feature but you gain a scoring penalty per kill with this disabled. For those playing for score this isn’t advisable. I left this on as I ran into an enemy ship or their fire more than anything. Shooting Blaster Big Bang Boom has a survival balance to it when it comes to weapons damage or colliding with ships. 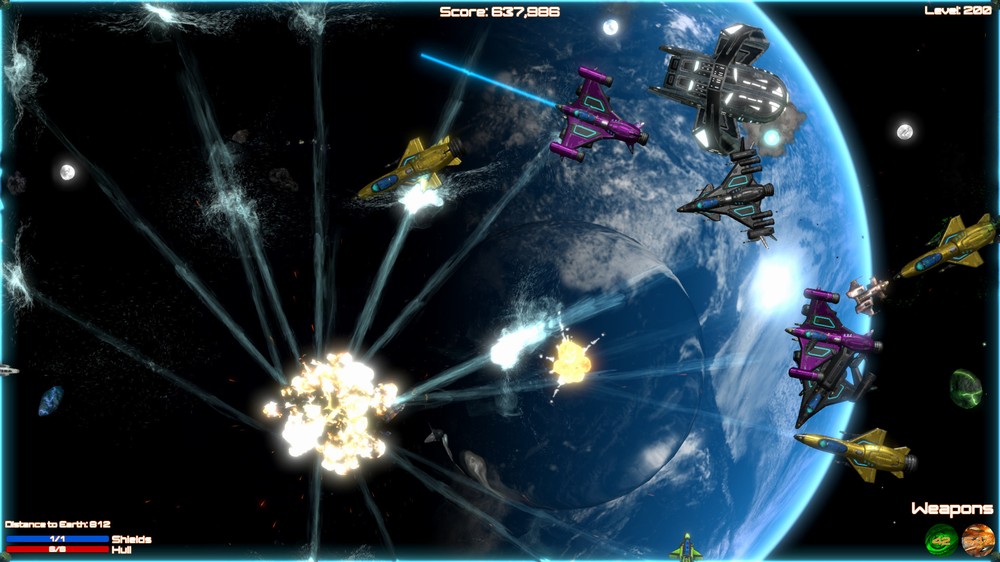 Starting off you are a puny fighter that can be easily destroyed in one hit with say a missile or rail gun. Other weapons like the Standard Gun only does 1 damage to your hull or shield comparatively. If you have a shield however it will take the brunt of the attack even if it the shield damage dealt is higher than your remaining shield. If you ever get hit by the slow Phaser weapon though you are toast, as it has 300 shield and 200 hull damage.

Enemy collision follows nearly the same rules as weapons. If you collide with a ship and you both have shields only 1 shield point is deducted on each ship. However if no shields are present on either side you lose 1 hull point while the enemy loses hull points equal to your remaining hull points. I can’t tell you the number of times I’ve died from collisions alone especially in the beginning levels. You also temporarily lose control of your ship if you collide with other ships or the border if Borders Kill is disabled which can be costly.

While Shooting Blaster Big Bang Boom gets its roots from games like Asteroids it fairs a lot better in the graphics and audio departments. While you’ll be looking at a lot at a black star speckled backdrop you will get a bit of additional variations in the form of a Sun and Earth later on. The Sun however can be toggled on/off if it becomes too distracting amidst all the weapons fire. The ships, yours and the enemies, range in size, detail and coloration just enough to be unique and stand out against the backdrop. According to SRM this title should work on a wide variety of PCs so pretty much anyone can enjoy it to varying degrees. 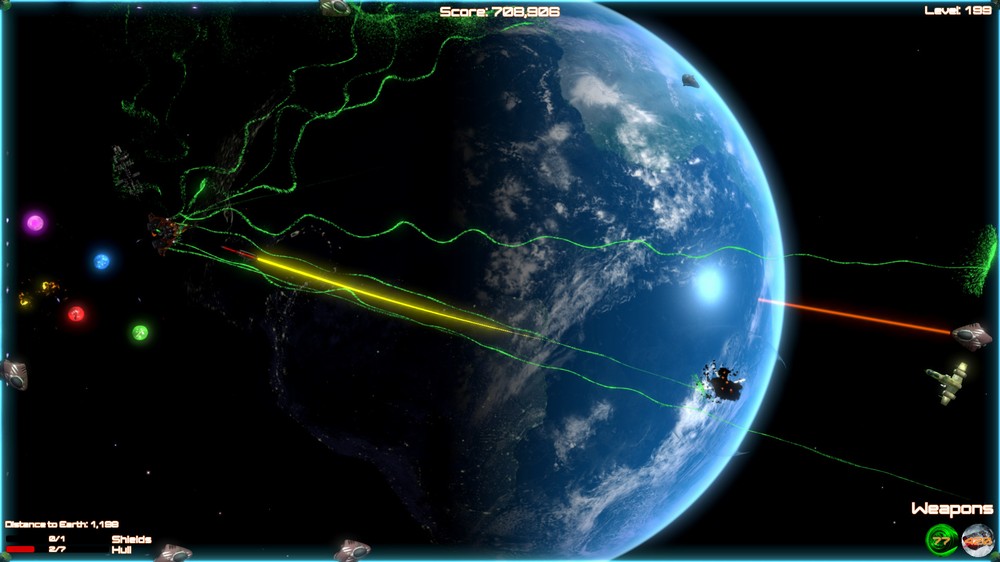 What I really enjoyed next to the actual gameplay is the music which has two audio soundtracks with accompanying melodies. By default you get a soft relaxing one which fits well with the spacefaring atmosphere. If you want things a little edgier to go with your obliteration of alien forces there is an optional rock soundtrack that is equally as enjoyable to hear in the heat of battle.