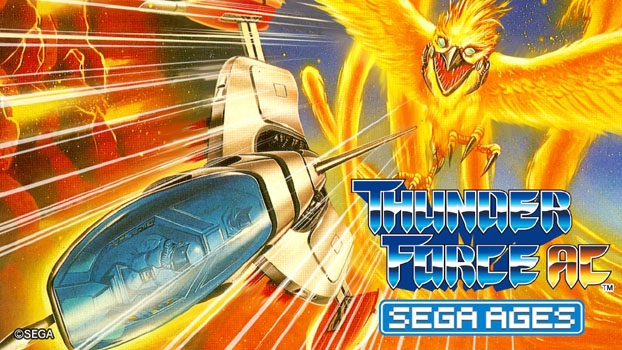 I’ve been surprised by how invested I have become in the Sega Ages line-up of titles that has been releasing on the Nintendo Switch, as I am often checking to see which games will be coming up next. It’s not because the Sega Ages name is a particular hallmark of quality (though the games I have played so far have all been enjoyable) but more because the games released so far have often straddled the boundaries of when I began gaming, meaning that while I recognize a number of the titles, there are more than a few that are before my time, which gives me a chance to experience games that I perhaps haven’t heard of before.

The most recent release, Thunder Force AC, is an example of this, though the history of the title is a little complicated. Originally released as Thunder Force III on the Genesis in 1990, Thunder Force AC is a reworked version of the game that released in arcades. When playing an older game such as this, I will often play the game for a while before searching for its history, in an attempt to prevent any contextual information from coloring my experience of the game. With Thunder Force AC, though, I was pretty confident that it was going to have been an arcade title, as I could feel my imaginary quarters being dragged from my pockets, as if by a magnet. Thunder Force AC feels designed to drain you of your cash, and while it is a difficult game, it is also quite a lot of fun. 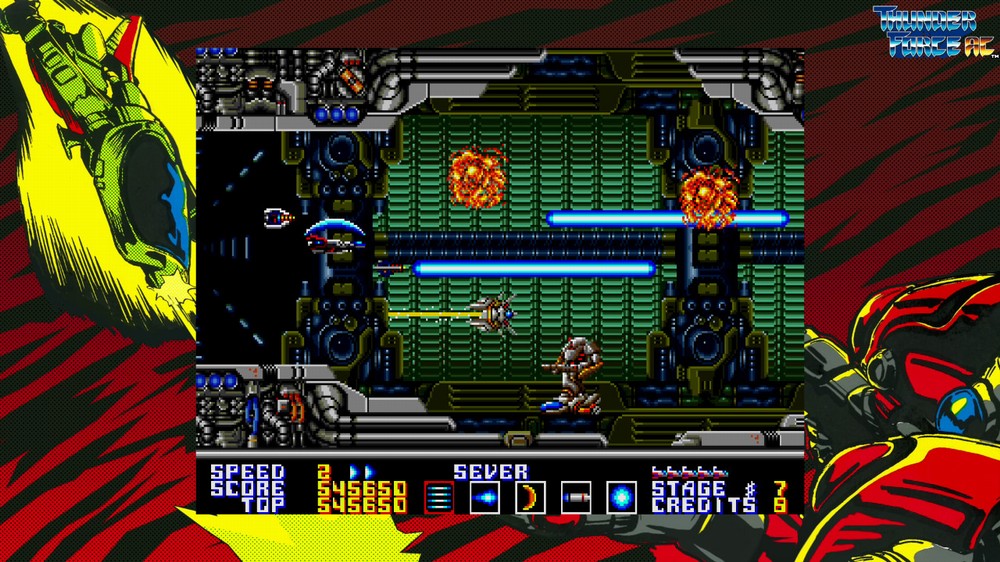 In an attempt to make the game a little more accessible to modern audiences, Thunder Force AC has included an easier Kids’ Mode, and despite its slightly patronizing label, I’m not ashamed to say that Kids’ Mode is where I spent most of my time with the game. As you play through the various levels of Thunder Force AC, you gain new weapons and abilities, and in the regular game, you’ll lose these each time you die. In Kids’ Mode, as well as increased outgoing damage, you get to keep these weapons, and while the mode doesn’t hold your hand as much as the title suggests, it makes the whole experience a bit more forgiving. Bear in mind that I still struggled at points in this mode, though, and it took me a couple of run-throughs to see the end of the game, and perhaps you’ll realize just how tough the main game is.

One of the main reasons that I persisted with Thunder Force AC is the fact that, despite the game being 30 years old, the visuals, and particularly the visual design, hold up quite well. Thunder Force AC is definitely a product of the era where less was more and you were expected to fill in the blanks with your imagination, but I personally loved flying and fighting through areas that could have been volcanoes or could have been far-off alien cities, but in the eyes of another, could have been something entirely different. For a side-scrolling shooter there is some interesting level design as well, with one particular example seeing you guide your ship around the outside of a larger craft, picking off specific areas such as turrets and hangars before flying inside and destroying the core. 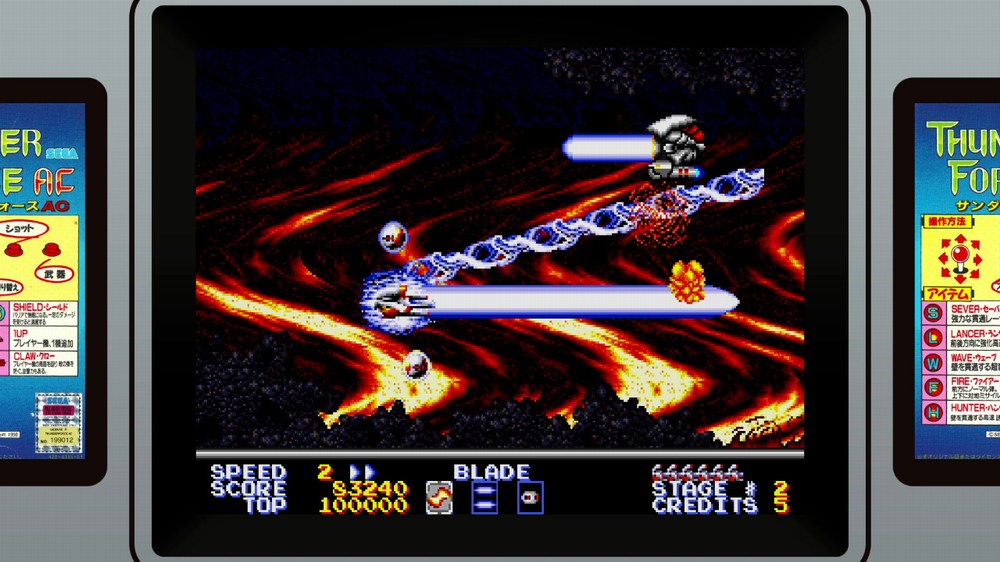 In a similar vein, Thunder Force AC doesn’t do a great job of explaining itself to the player, instead leaving you to experiment with its various mechanics and to learn by doing. A side-scrolling shooter doesn’t need much of an introduction, but the variety of weapons and ships (including some from later games) means that you can often lose a few valuable lives early on just by figuring out what option is best to use at any particular time. This extends to the enemy designs as well, as there often isn’t much indication of the best way to defeat a foe, particularly when it comes to the larger bosses and mini bosses. Like a lot of games from the era, you’re expected to come up against them time and again, improving your strategy each time until you can almost defeat them with your eyes closed. If you grew up with these titles, you’ll be used to this and almost come to expect it, but for newer gamers, it might seem incomprehensible that a game such as this almost refuses to help you.

With previous Sega Ages games, I have often kept them installed on my Nintendo Switch for the times when I just want to play a quick game of something, as games from this particular era are often perfect for a quick match or two. With Thunder Force AC, however, I haven’t yet made my decision, but that’s not because I didn’t have fun with it. Thunder Force AC is tough, and lends itself to the kind of gamer that is willing to run into a brick wall over and over until they break through, learning enemy patterns and ship types, figuring out which weapon’s attack is best for a certain section, and becoming so familiar with a level that they almost don’t have to consciously think about what they’re doing when playing. That isn’t the kind of experience I want when I have a quick five minutes free, so despite the fast-paced gameplay and banging soundtrack, I find that personally, Thunder Force AC will likely be the kind of game that I will need to find time to dedicate myself to, rather than using it as a stop-gap. 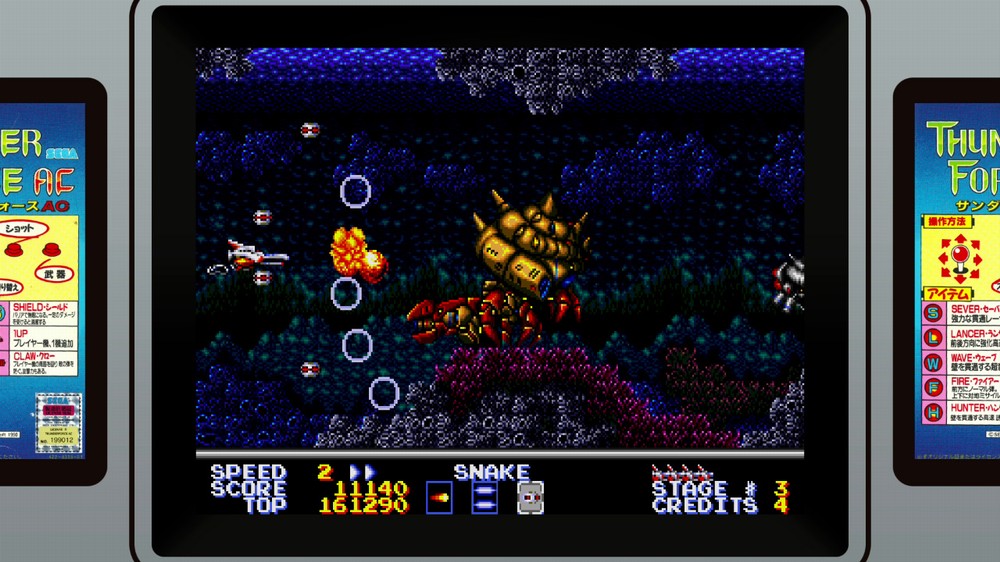 I have to say, that for a game that kicked my butt as frequently as Thunder Force AC did, I’m pleased that I still came out the other side with a positive impression. Part of that is admiration for how well the game holds up, especially due to the fact that there were still moments in the gameplay where I was wowed by what was happening on screen. In terms of games that I’ve played recently, this is title that I have most associated with playing on my Genesis back in my childhood bedroom, despite not owning the game or even really being into side-scrolling shooters back then. Thunder Force AC just so perfectly personifies that era of gaming, with its visual, music and gameplay that I can’t help but feel like this is the kind of game that I should have owned. It’s not an easy game by any means, but there’s been enough added to make it enjoyable for a modern gamer, and if you’ve been interested in the Sega Ages line-up so far, I think that Thunder Force AC is a worthwhile addition to your collection. 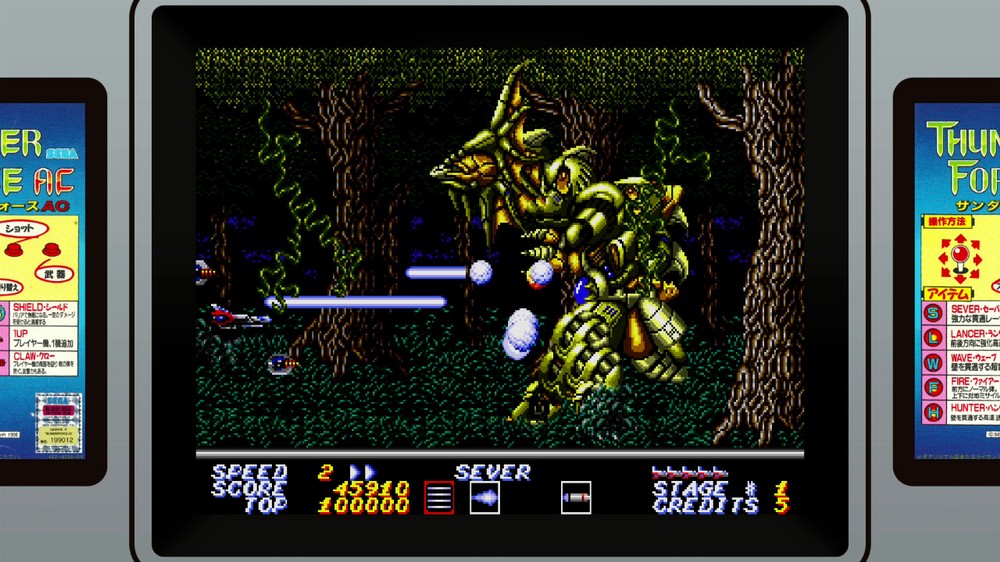