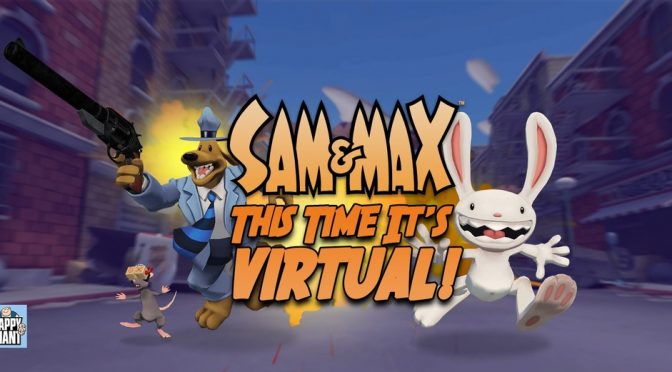 For better or worse, I am a huge sucker for updates to classic gaming franchises.  So when I was offered the review of the newest Sam and Max PSVR game, it was without hesitation that I enthusiastically agreed to take it on.  Sam and Max have been legends of the gaming world for the better part of three decades, dating back to their first point-and-click adventure Sam and Max Hit the Road released in 1993.

The titular team consists of canine gumshoe Sam and his wisecracking bunny sidekick Max, who make up the Freelance Police detective service investigating any number of wacky events caused by otherworldly criminals.  Granted, over the years I’ve come to terms with the fact that Sam and Max games generally are not the greatest in terms of gameplay but are always enjoyable experiences due to their superb humor and clever design.  And with that I can say that This Time It’s Virtual is a classic Sam and Max experience; it might not be the best PSVR game on the market, but damn if it isn’t a fun – but sometimes frustrating – experience. 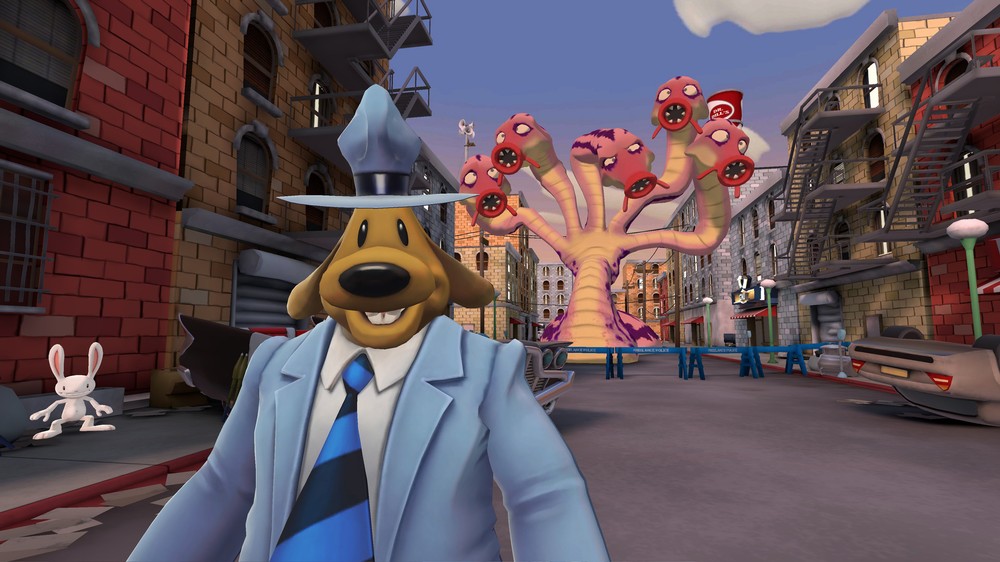 This Time It’s Virtual starts by throwing gamers into the thick of the VR space, with a missile-launcher battle against a big hydra monster in the street outside of the Freelance Police office.  This battle introduces gamers to the basics of the VR controls employed by the game, which I will say is definitely NOT the most intuitive control scheme in the VR market.  Regardless of the settings modifications, the controls are wonky and confusing, with some buttons unique to certain controllers and others mirrored across the two.  Over the handful of hours I put into playing This Time It’s Virtual, I never once felt like I had a comfortable handle on the controls – which is a shame because the game really has a lot to offer.

Back to the story – gamers step into shoes of an aspiring detective applicant to work alongside Sam and Max.  And after the initial hydra boss battle, Max doles the new guy a series of menial office tasks – making coffee, microwaving corn dogs, throwing darts (or switchblades, or axes, or swords, or Max himself), punching clowns, and shooting cockroaches.  Again, these tasks are to help familiarize the gamer with the controls which work OK, all except for the throwing motions which are about the worst in the business.  Out of the dozen or so throws, I think I hit the target three times – twice of which were ricochets off the wall or ceiling which just happened to deflect willy-nilly onto the target.  The game features a lot of throwing challenges which consistently were my lowest-scoring events.   Shooting is another story – it’s awesomely rewarding – but we’ll talk a little more about that later. 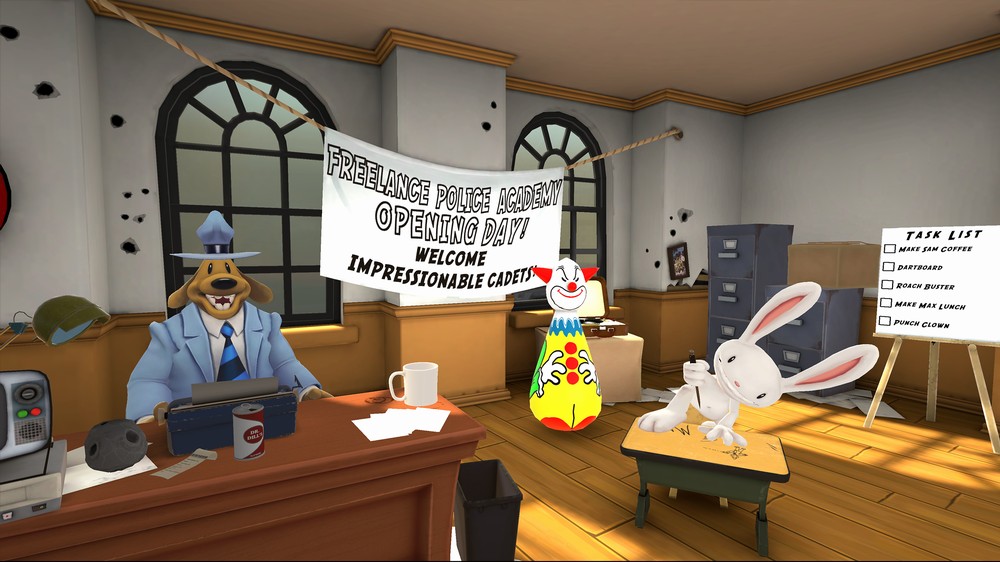 Sam and Max take the gamer to an abandoned amusement park, which is the home of Sam and Max’s new applicant training grounds.  Each attraction within the park has been transformed into a themed chain of minigames – a dangerous obstacle course, a bop-it style bomb diffusion exercise, a shooting gallery, etc.  Deaths are pretty hard to come by, but each pass garners the gamer an A-F grade that they can repeat for a better score.  Some of which are enjoyable enough for a replay, but others are so annoying there’s absolutely no reason any sane gamer would want to subject themselves to the frustration multiple times over.

After three minigame threads, gamers take part in an investigation – traveling to a location and interviewing a colorful cast of characters in an attempt to solve an overarching mystery.  It’s all pretty mundane stuff, but each is capped off with a frantic boss battle that will put the gamer’s newfound skills to the test.  After that, it’s rinse and repeat. 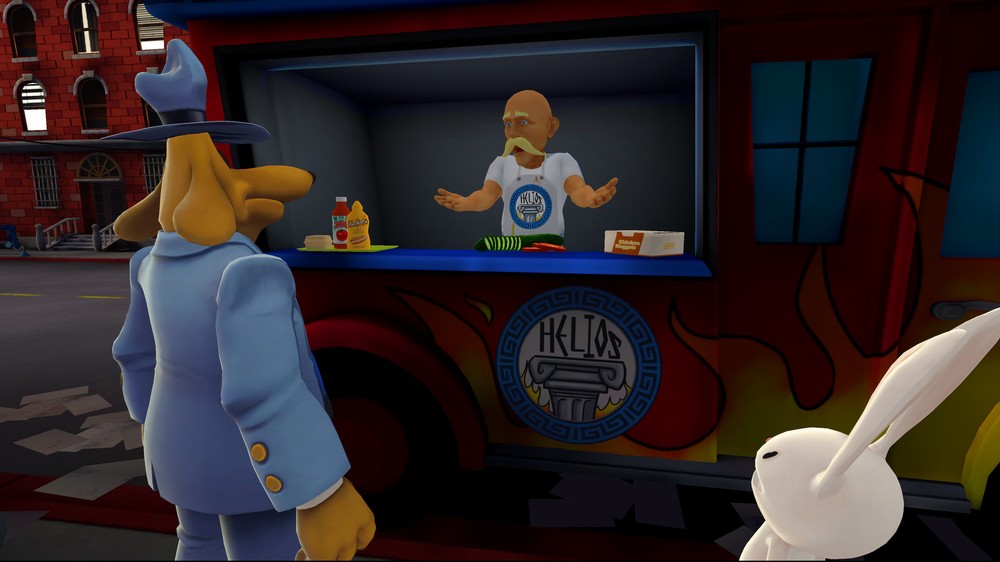 As alluded to earlier, the dialog really makes the game enjoyable – especially Max’s double-entendre laced quips which were funny enough that I heard my wife cracking up behind me even with the PSVR earbuds plugged firmly in my ear holes.

Visually, the game is solid insofar as the character modeling and overall environmental aesthetics.  But it is glitchy – and by glitchy I mean really, really glitchy.  For some reason, Sam wants to walk exactly wherever the character is walking – and I am serious…exactly where the gamer is. And rather than simply bumping into him, you end up inside him in some totally black hole that is impossible to avoid.  And don’t bother getting too close to any buildings, because you’ll end up in a similar black hole world that is even more disorienting and impossible to escape than being inside Sam.  There’re inaccessible alleyways that if Sam and Max step one foot in it will send them offscreen in a weird moving sidewalk style animation, and if you fall off a building’s roof you might as well restart the game rather than experience the black hole infinity drop that does happen.  I had heard about similar glitches in the earlier PC VR releases of This Time It’s Virtual, but I was really hoping they’d fixed these issues at some point in the last year or so. 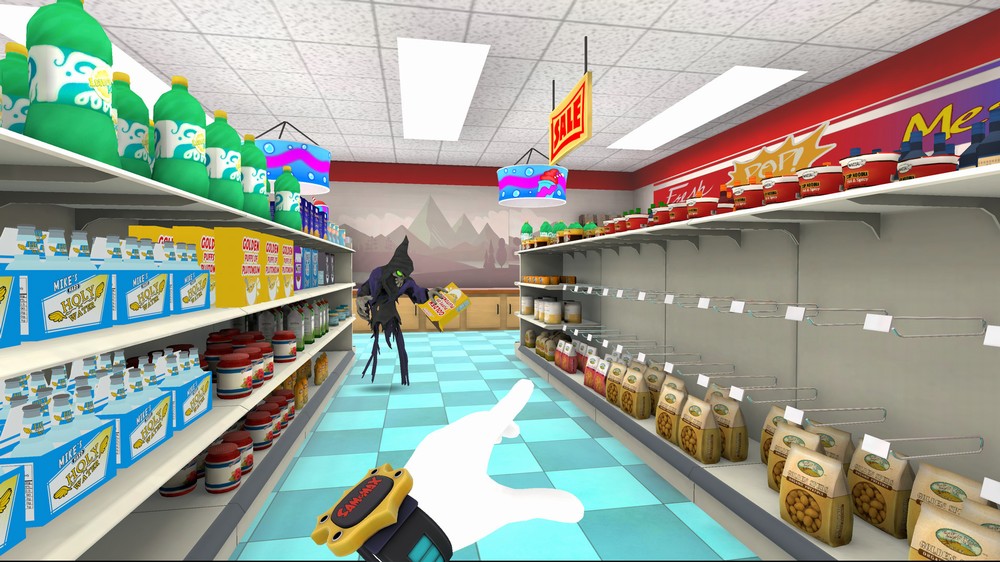 Sam and Max: This Time It’s Virtual! Has a lot going for it, especially with the excellent writing but at the same time it is a glitchy mess. I can get over some of the odd clipping issues, but the throwing mechanics render those events almost unplayable.