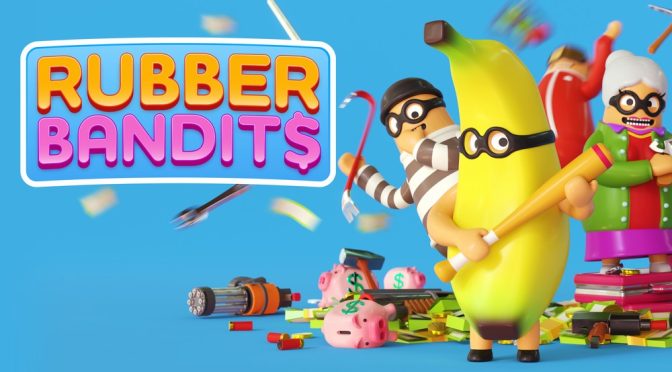 Fresh on the PS4 gaming scene is a raucous and whimsical multiplayer party game that pits four wobbly-bobbly crooks against each other to gather as much illicit loot and escape the scene before the cops come to lock them all away.  This multiplayer, cross-platform, online mayhem from København, Denmark’s Flashbulb Games is aptly titled Rubber Bandits, and what it lacks in gameplay depth is more than made up for in visceral entertainment.

The gameplay characters are just what you’d expect from a game bearing the name Rubber Bandits – coming in somewhat like a cross between Despicable Me’s wacky hotdog-shaped Minions and the floppy blow-up tube guy gas stations and cell phone stores put at the curb to draw attention.  This wobbliness of the characters affects the control physics as a whole – movement, momentum, accuracy, etc. – which adds a unique layer of complexity to what would otherwise be overly-simplistic gameplay. 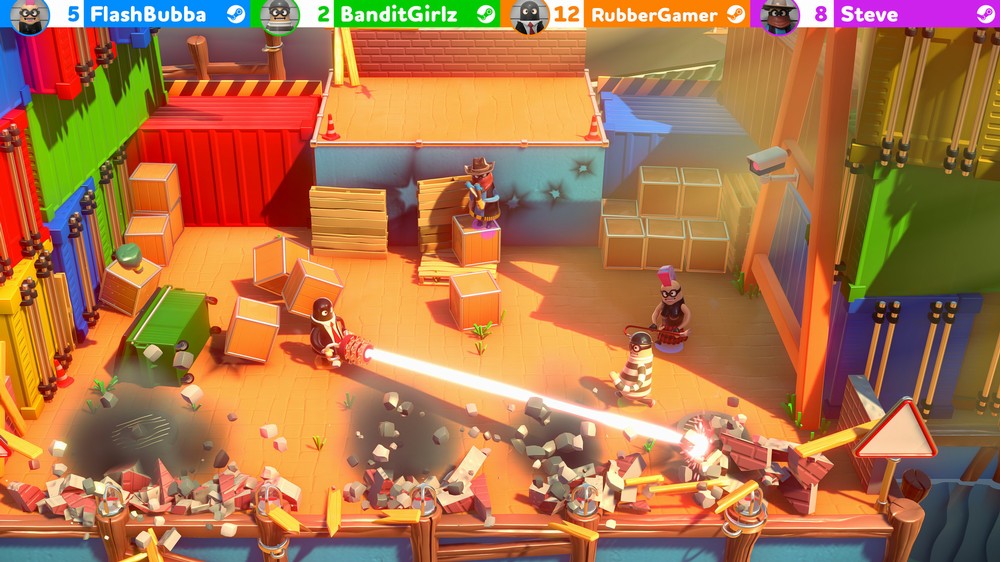 Rubber Bandits opens in the central lobby, which happens to be a jail cell where the chosen character is housed.  Breaking out of said cell isn’t all that difficult, as the game leaves a key on the floor at the foot of the cell’s bed – but this key won’t open the door lock, instead the character can use it to melee-bash through the wall to gain entrance to a neighboring cell, or to bust out the cell’s bars and set the character off on the next gameplay level.

Rubber Bandits offers up three gameplay modes – Heist, Arcade, and Brawl – which is selected by smashing the toilet in the cell – seriously.  Each mode is intended to be played with up to four players, and can be played either locally on one monitor, or online – and yes, it supports cross-platform play with PC, Xbox One, Xbox Series X and S, and of course PS5.  Arcade is the only mode that offers any form of single-player gameplay, which it comes off as very weak without the help of other gamers or AI Bots, so gamers looking for a single-player experience will probably want to look elsewhere. 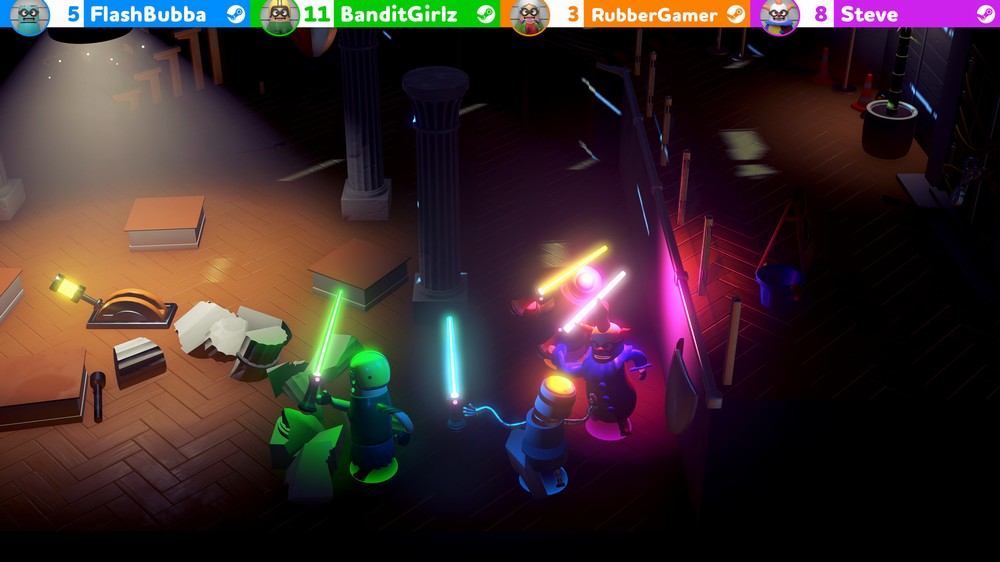 Heist is the main gameplay mode in Rubber Bandits and is mad-crazy.  It Heist, the game party will play through three 1 – 2 minute levels trying to gather up the loot that is hidden around the level and escape through the exit door once it opens.  The levels are well laid-out, and the game does an excellent job highlighting possible loot and power-up stashes, spawn points, and exit doors prior to the start of each mission.  Once the timer starts, players move their cumbersomely floppy characters around the level, grabbing various items to use as weapons which could be anything from a loaf of French baguette to a futuristic laser rifle.  Players have a finite time to grab as much cash as they can; all while beating other players to steal their cash, and doing all they can to avoid being attacked and losing their cash, until the timer goes off and everyone makes a mad dash to the escape door.

Arcade mode is similar to Heist, except rather than playing against each other, gamers team up against AI guards and police.  The idea here is for the team to use stealth to sneak by the guards and get all the loot before being arrested.  Arcade requires a lot of cooperation between the gamers – which is often easier said than done.  Again, the game does a great job marking all the areas of interest prior to starting the levels, which definitely helps familiarize one with new levels – especially online where it can be embarrassing to be the only gamer coming in new to a level you haven’t ever played before. 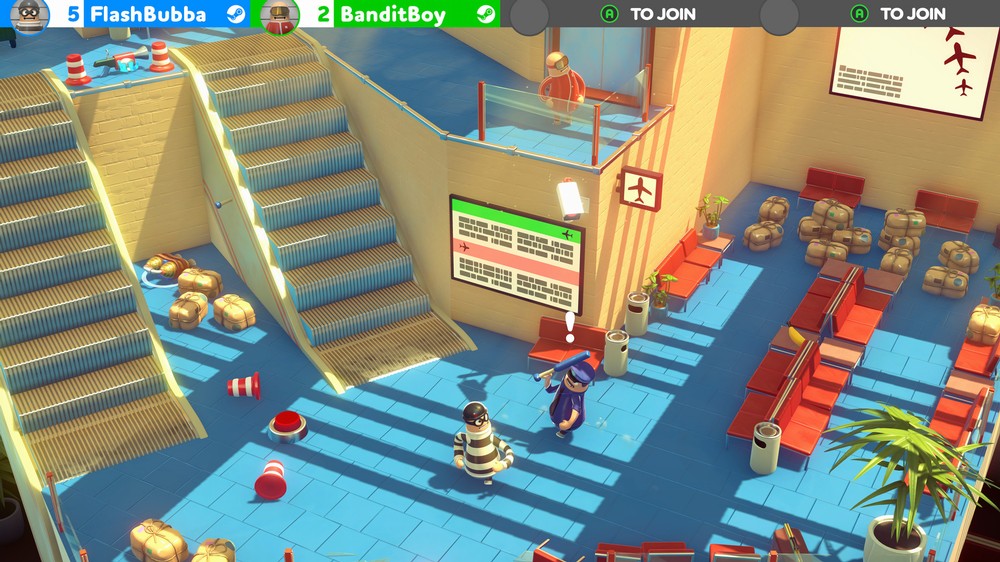 Brawl mode pits gamers up against each other either “every man for himself” or in two-player teams, in a deathmatch-style brawl.  Each character has three health hearts that are depleted with each blow; the last man standing wins the level.  Brawl is little more than a vehicle for gratuitous slapstick violence, but it is fun.

As I have mentioned multiple times already, Rubber Bandits supports online cross-platform play, and whenever I was able to join a gameplay party, the overall online experience was pretty much flawless with no noticeable lag or crashes, but the act of actually getting into a gameplay party often took multiple failed attempts, with the matchmaking either timing out, or crashing altogether.  Granted, we often get the download codes prior to, or very early in a game’s release window, which as you can imagine limits the amount of available players for matchmaking.  Normally this isn’t much of an issue, but with a game that leans so heavily on online multiplayer; this made it a bit hard to review.  Hopefully as more gamers give Rubber Bandits a try, the matchmaking will become less finicky. 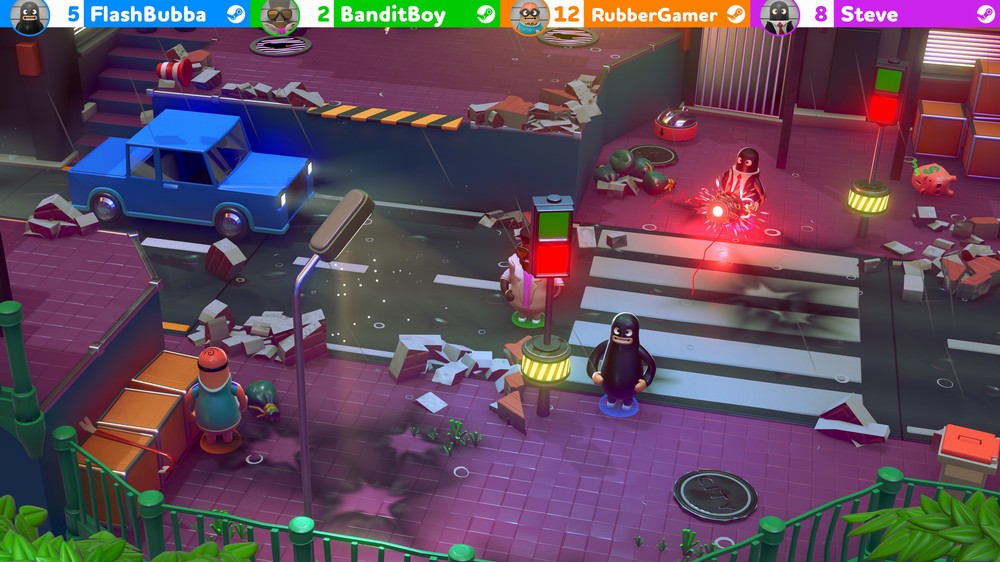 Rubber Bandits might not stray too far from the traditional multiplayer party game genre, but the unique characters, wobbly physics, frantic gameplay, and cross-platform online functionality make it a great addition for gamers looking to have good, mindless fun with their friends.