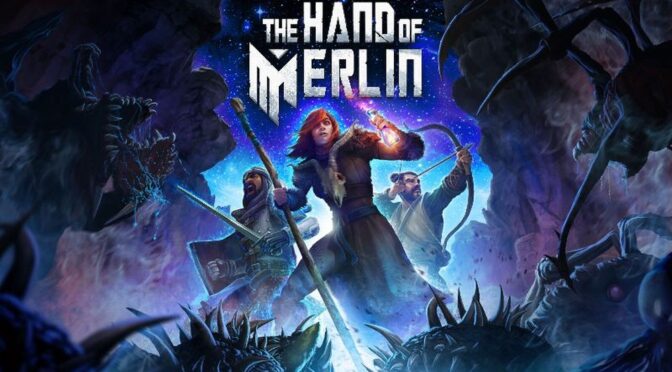 Independent developer Room C Games in co-production with Croteam and in partnership with indie publisher Versus Evil are excited to announce that their rogue-lite RPG game The Hand of Merlin has left Steam Early Access today on PC, and is available to play on PlayStation 4, PlayStation 5, Xbox Series X, Xbox One and Nintendo Switch. The console versions launch with all eight major updates from the PC version included.

The Hand of Merlin is a turn-based rogue-lite RPG in which Arthurian legend clashes with dark and foreboding sci-fi horror. This unusual merging of genres introduces a wholly unique sci fi element to its storytelling. Utilizing both squad-based and turn-based combat, players can employ tactical cunning to use cover, set up ambushes and coordinate attacks with ranged, melee and spellcasting combat to conquer both human and unworldly abhorrent creatures and other enemy characters they encounter on their quest.

The Hand of Merlin will take players on a journey from Albion to Jerusalem to explore richly imagined medieval lands on the brink of apocalypse – assaulted by an otherworldly evil from a story crafted by Jonas Kyratzes (The Talos Principle, Serious Sam 4) and Verena Kyratzes (The Lands of Dream, Serious Sam 4).

The Hand of Merlin is a game where choices are permanent depending on the decisions players make as they carve a path across the lands of Albion, Marca Hispanica and al-Andalus. Adventurers will also need to find a keen balance as they weigh the risk and reward for the paths they choose.

What players take with them on this journey will be essential since combat is inevitable, trading in nearby towns can improve arms and armor, or they can continue to roam and trade with hermit artisans in the wild. Renown is the backbone of progression in The Hand of Merlin and can be used to level up party heroes, and players can choose between a randomized set of new skills or improved attributes to balance out the combat prowess of their party.

Since entering Early Access in May 2021, The Hand of Merlin has had eight major updates on its path to version 1.0, which have added a variety of gameplay options for players, including randomized party creation, new epic questlines, meta progression, passive skills, alternate maps and varied difficulty modes. One of these latest updates includes ‘Endless Mode’, a brand-new way to play the game with a new biome, complete with 20 unique new combat maps and an opportunity for players to learn Spells, and for fueling up Hard Mode+ run modifiers. Combined, these eight updates provide a comprehensive set of features designed to enhance the overall player experience for RPG fans.

“Throughout Early Access we’ve committed a lot of time and energy into community feedback with a series of updates that have really embellished the games features and replayability based upon what the community was telling us, we’re extremely pleased with the results and the work the team has done to make The Hand of Merlin a truly competitive rogue-lite RPG.“ Said Robert Sajko Creative Director at Room C Games.

With a large focus on exploration and encounter, mortality is the consequence of existence in human form, but even in defeat, players retain collected arcane knowledge as they jump from one parallel dimension to the next. No two worlds are ever quite the same, and each journey will be unique. Defeat is not the end in this realm, only a new beginning. For a full list of updates and features added to the game head over to The Hand of Merlin Steam page here.

Versus Evil has a 40% launch discount in place for its first week on sale for the PC version on Steam.