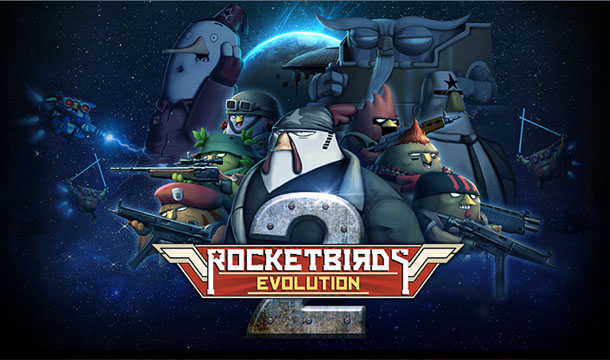 Hearken, action-platform soldiers – the all-breast meat chicken action shooter of 2017 is here! Ratloop Asia announced today that Rocketbirds 2: Evolution, the direct sequel to the fan-favorite original Rocketbirds: Hardboiled Chicken, is available today on Steam. Launching at a 10% discount, players can download Rocketbirds 2: Evolution at $8.99 for a limited time ($9.99 retail price).

To continue the celebration of this savory release, fans can now buy the new compilation soundtrack from indie rock band New World Revolution, featuring select songs from both games. Download the Rocketbirds official soundtrack for $4.99 on Steam HERE: store.steampowered.com/app/578970

The “most interesting chicken in the world” is back in his first sequel Rocketbirds 2: Evolution, where Hardboiled Chicken gets entangled in a mysterious and sinister penguin plot in “Part 1: The Cockup”. Meanwhile, the pint sized budgie commandos are forming a strike force of great magnitude in “Part 2: The Rescue”, where players need to rescue and recruit hostages from deep behind enemy lines. Both parts can be played in or out of order, but converge to complete the full Evolution story.

Players will engage in nuanced, side-scrolling, shooter action as they face an assortment of evil penguins, space owls and other fowl creatures while strapping on jetpacks and wielding new, powerful weapons of ‘de-clucktion.’