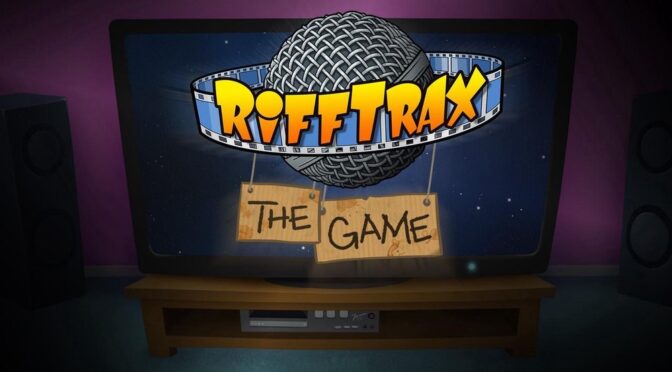 About a year ago, Wide Right Interactive released the party game What the Dub?!, which was widely referred to as the videogame version of the classic television series Mystery Science Theater 3000 (MST3K).  For those who don’t know MST3K, the show that ran from 1988 – 1999, featured three hosts wisecracking an endless string of jokes overtop old B-movie dialog. I cannot claim to be a huge fan of MST3K back in the 1990’s – most likely because I was in college for the better part of that decade and wasn’t about to swap beer money for cable TV – but if I happened to stop at a friend’s house and MST3K was playing, I would often find myself enjoying an episode or two. 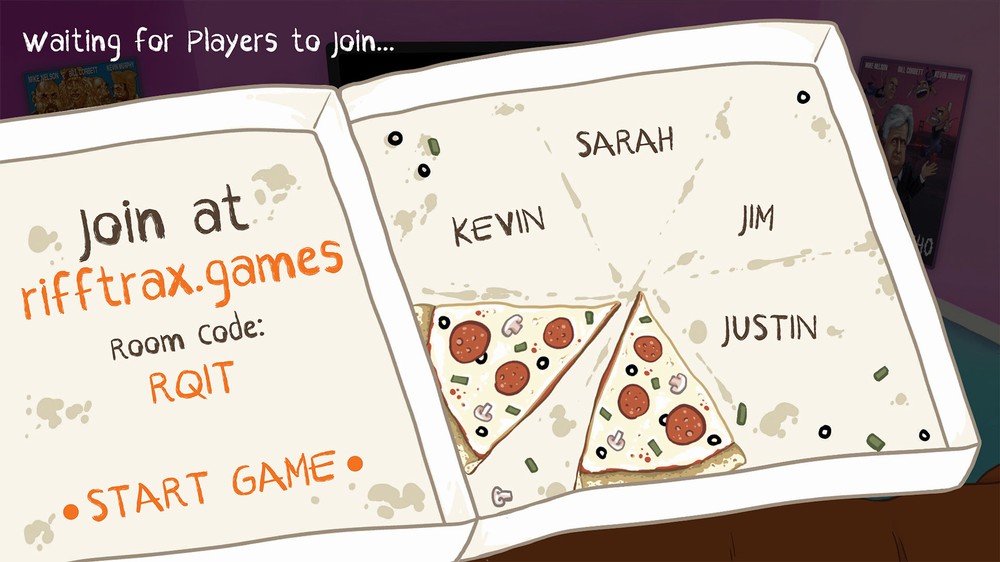 What the Dub?! was released in April of 2021 and allowed gamers to play a little MST3K of their own.  The gameplay consisted of the playing of a snippet of a particularly awkward/cringey scene from a B-movie with a portion of the dialog muted, and a roomful of gamers would be encouraged to come up with a funny quip or quote for the character to say during the muted section.  Each player or team could interact with the screen via a personal phone or tablet browser using the 4-digit room code generated at the beginning of the game.  The responses would then be played one by one with the text converted to surprising-authentic sounding speech, with the players/teams blind voting for the best responses. 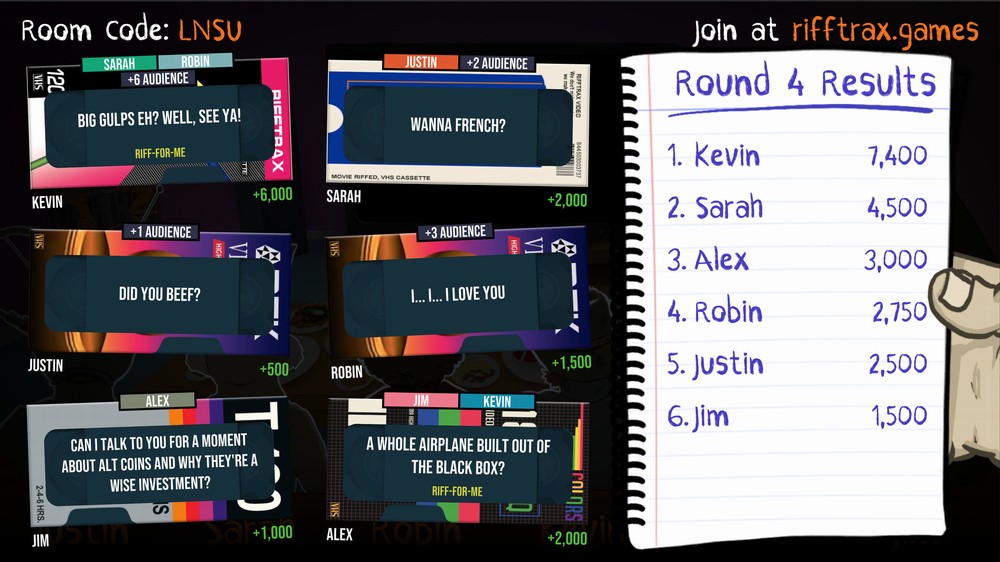 Just a little over a year later, Wide Right Interactive is back at it with the follow-up to What the Dub?! titled Rifftrax: The Game.  Again, I have to admit that while the Rifftrax name and logo looked and sounded familiar, I had no idea what it was referring to – so I did a quick internet search and lo and behold Rifftrax is the online subscription-based on-demand incarnation of MST3K. It seems Wide Right Interactive joined forces with the very folks who influenced their original game to come up with the new and improved version we have with Rifftrax: The Game. This official MST3K licensing definitely lends credit to a game that was initially considered a somewhat of a conceptual rip-off.

Rifftrax: The Game plays exactly like its predecessor, What the Dub?! – with the gameplay broadcast on the console screen, players join in using a personal phone or tablet to enter the game code into their browser.  The admin can select the number of rounds, the maximum time for writing or selecting a “riff” to go with each scene, and the maximum voting time at the end of each round.  Once in the game, a short scene is played with a muted section rife for a riffing, and the gamers either type in a custom response (Write a Riff mode) or select from a list of six “professionally written” riffs that were randomly assigned to each player at the start of the game (Pick a Riff mode). 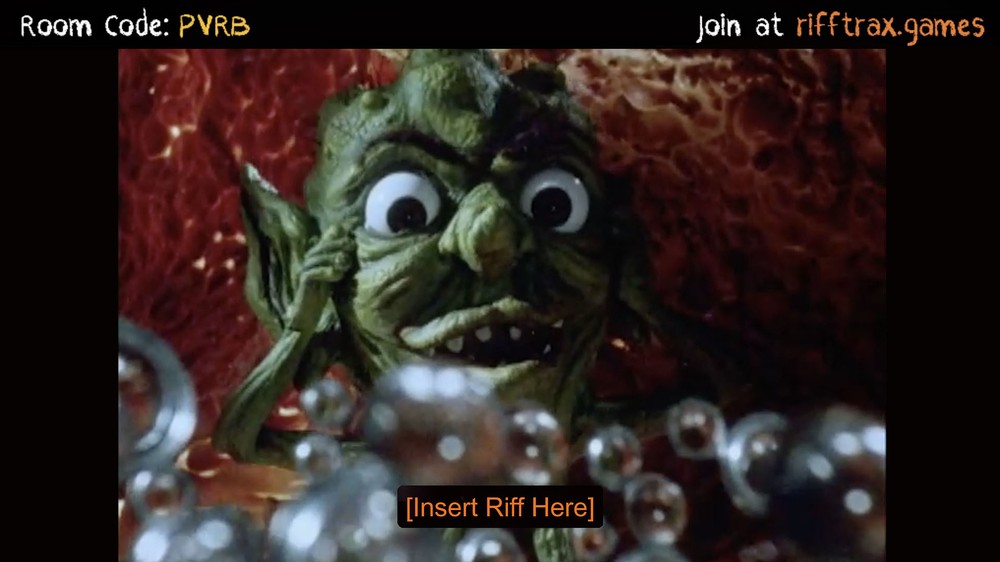 After all riffs are entered, the game replays the scene multiple times, inserting each player’s riff via text-to-speech, including any selected sound effects.  At the end of each round, players vote on which riff they thought was the most entertaining.

If Rifftrax: The Game sounds fun to you, then I can say you’ll really enjoy it, and you certainly can play single-player just for fun, but to get the maximum entertainment value really requires a large group of people – like the six (6) allowed to play simultaneously, either in-room or online with an active PlayStation Plus membership, as well as 12 additional audience members.  Rifftrax includes cross-play and voice chat to really make things fun when the party is going to be purely online. 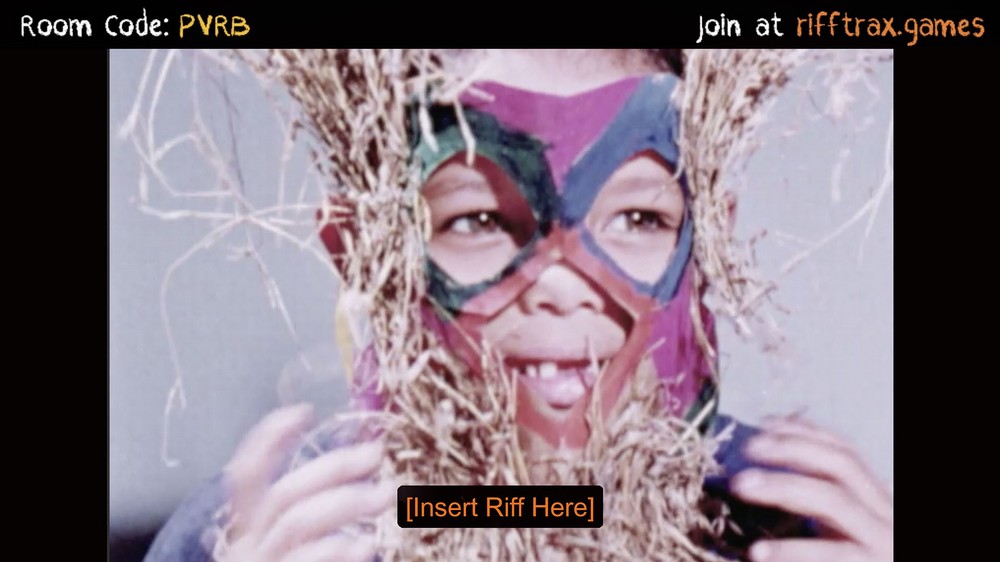 The Write a Riff mode is pretty straightforward and as I mentioned earlier, I was quite pleased with how authentic the text-to-speech comes across when reading typed answers.  Of course, I had to throw a few curse words for research purposes, and the game delivered them straight-up with no caption censorship or verbal bleeping.  I did find that you have to mess with commas and periods to add natural pauses to the cadence, as sometimes the speech came out a bit robotic in flow.

The Pick a Riff mode is really quite interesting, as it assigns each player with six pre-written riffs at the beginning of each game.  With each round, once a riff is selected and used, it is replaced with a new riff.  Once and only once during a game, a player can reshuffle the riffs to get six new riffs from which to choose.  Much like Cards for Humanity, the riffs at hand often have nothing to do with the scene presented, leaving gamers up to making interesting decisions on how best use their riffs.  Thankfully, unlike Cards for Humanity, Rifftrax: The Game’s riffs are all fairly family friendly, so the gamer won’t be left having to decide how to tastefully lay out Harry Potter’s sexual proclivities with aquatic animals and the resulting STD’s that might ensue.  Of course, they are free to do such in the Write a Riff mode, but that would be on their own conscience. 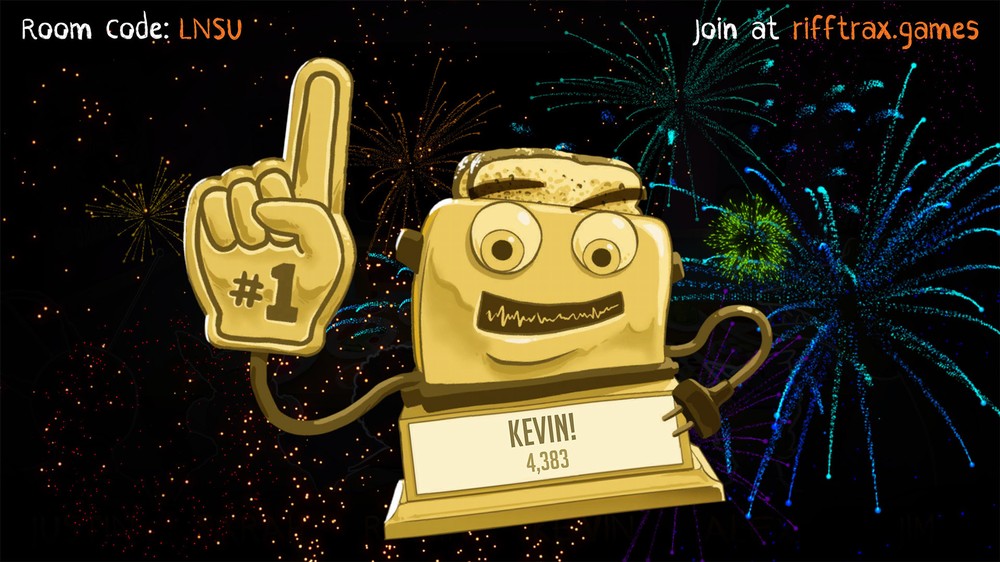 While it’s certainly not as fast-paced and engaging as some of the Jackbox titles, Rifftrax: The Game is every bit as clever, and party-gamers can hardly go wrong with the mere $10 sticker price, especially given the ability to play online with up to 18 others.