My Game Chronicles bio cites the Nintendo Entertainment System, better known as the NES, as establishing my gaming obsession. It’s true: The NES made me the serious game addict I am today. If it weren’t for Nintendo, I would have spent considerably less time playing video games when I was a wee lad.

In many respects, Nintendo was like a second family, nourishing me with countless hours of entertainment and keeping me out of trouble…well, any serious trouble, like carjacking and drug dealing (things I now do through video games, ironically enough). Constantly having to save some damned princess required a lot of free time, after all, and that’s exactly what I had as a kid. Unfortunately, my relationship with Nintendo began to erode in the ’90s.

For starters, I lost interest in saving the lousy princess; her butt was no longer worth rescuing. Further, the idea of controlling a portly plumber or cute elf started to lose its appeal as I entered my teens. I was looking for digitized blood and guts, in the form of Mortal Kombat, and Nintendo wasn’t willing to give it to me – the Super Nintendo version of MK was censored, much to my dismay.

Naturally, I did what any teenage gamer would have done at the time: I turned to my trusty ol’ Sega Genesis, on which a graphically inferior but delightfully gory version of Midway’s bloodbath awaited me. From that point on, it was clear to me Nintendo wasn’t interested in growing with its fan base, favoring a more family friendly approach instead.

That was just the first of Nintendo’s many questionable strategies that left me feeling perplexed. Next was the Big N’s decision to forgo the CD-ROM format for the Nintendo 64, the highly anticipated (and much delayed) 64-bit successor to the Super Nintendo. Rather, it stuck with restrictive cartridges while its two main competitors, Sony and Sega, fully embraced CD-ROM for their 32-bit systems.

The Nintendo 64 wasn’t without merit, however. Among other things, it featured an innovative controller, four controller ports (a rarity at the time), and some of the greatest games ever made, including Super Mario 64 and The Legend of Zelda: Ocarina of Time. I was already burnt out on Mario and Link, though, despite how great their games were.

Sadly, N64’s software didn’t really “mature” until the console’s later years, when games like Perfect Dark and Conker’s Bad Fur Day saw release. By then, it was too little too late – the next console cycle had already begun.

And yet, like a battered wife, I was willing to give Nintendo another chance. That chance came when the Nintendo GameCube arrived, sporting a proprietary mini-disc drive. While the system looked adorable, I felt Nintendo had once again dropped the ball by utilizing a restrictive media format. Many developers felt similarly, thus resulting in the absence of several notable third-party titles.

Another disappointment for me was the GameCube’s inability to output digital audio, something the rival consoles boast. Even more disappointing was Nintendo’s decision to remove the digital video output from later versions of the hardware, preventing latecomers from taking advantage of the system’s progressive-scan capability. And do I even need to mention the complete neglect of online gaming?

Mostly, however, I was underwhelmed by the GameCube’s library of games. With a few exceptions, much of it just didn’t appeal to me, an adult gamer with zero interest in Pokémon and other such inanity. Bear in mind, prior to the release of the GameCube, I had already grown tired of many of Nintendo’s key franchises.

No, I was mainly interested in the ’Cube for its non-first-party exclusives, specifically the new installments in the Resident Evil series. Then, shockingly, Capcom announced the once GameCube-exclusive Resident Evil 4 was in the works for the PS2. That was the moment I realized I no longer needed a GameCube.

Ultimately, I sold it when the selling was good, which unfortunately meant missing the GameCube version of Resident Evil 4. (If you must know, the system was sold to someone seeking a GameCube with one of those crazy digital video outputs.) I certainly wasn’t going to let the little guy collect dust, nor did I need to keep it around to play multiplatform games – that’s what a PS2 is for. 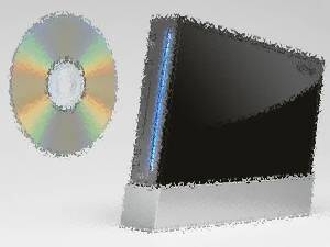 Now Nintendo’s next-generation console, the Revolution, draws closer, and I’m not fully convinced it will be all that revolutionary. Admittedly, Nintendo still hasn’t revealed what, precisely, will be so revolutionary about the Revolution. Will the “revolution” be a new type of controller? Or maybe a new way of interacting with games entirely? Inquiring minds want to know.

What is currently known about the system doesn’t exactly have me pulsating with excitement. For one thing, Nintendo has already stated that the Revolution will NOT support high definition – a major bummer for this home-theater enthusiast. What’s more, the Revolution’s main selling points right now appear to be a developer-friendly environment, backwards compatibility, online functionality, and downloadable Nintendo games from the NES era on up. Nothing revolutionary so far…

Obviously, Nintendo is still clinging to the past, looking to attract throngs of Nintendo faithful to the Revolution with familiar classics and updated franchises. It’s also hoping to lure trepid game designers and independents with the promise of easy, low-cost development. The impending “HD era” apparently has some developers shaking in their boots, or at least that’s what Nintendo is banking on.

Nevertheless, if Nintendo wants to renew my interest and receive my gaming dollars, its next-gen console had better deliver a real revolution, not just a couple of baby steps. I have already reserved shelf space in my entertainment center for the Xbox 360 and PS3, and that could very well be all the space I’ll allocate for the future consoles. This gaming hobby is rather expensive, you know.