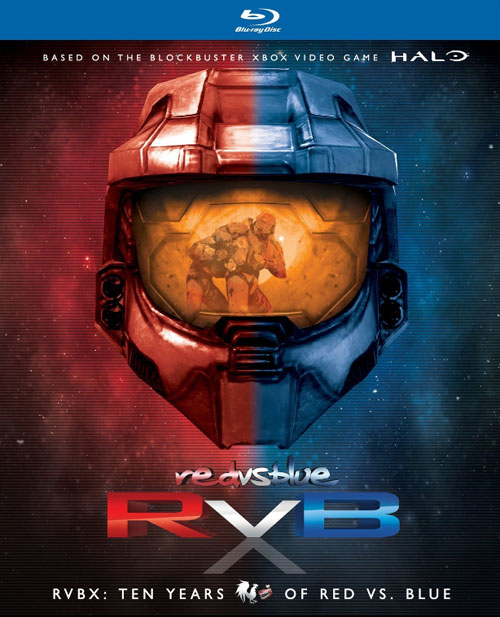 Halo turns 11-years old this year and following right behind it is the insanely popular machinima web-series Red vs. Blue celebrating its tenth anniversary and its tenth season. What started off as a simple series of sketch comedies designed around manipulating the in-game graphics of Halo characters and dubbing in hilarious and often edgy dialogue has now turned into an extremely ambitious and polished effort by a massive group of talented folks who now combine classic machinima with state-of-the art motion-capture and stunning CG animation to create something that transcends both unique art styles.

To celebrate their 10th anniversary and their debut on Blu-ray, Rooster Teeth has released a massive 14-disc compilation box set featuring all ten years of Red vs. Blue and hours upon hours of bonus content, extended footage, and special features. If you’ve never gotten into Red vs. Blue or you are looking to convert your existing DVD collection into high-def then look no further than this definitive release.

While the first two-thirds of the series really doesn’t benefit from the high-definition treatment these past few season have come to feature more and more CG with Season 10 actually tipping the balance in favor of CG, whether it be full-blown 100% computer created sequences or just rampant digital trickery to enhance the classic machinima techniques. Needless to say, the episodes are all 100% digital, so their transition to Blu-ray is fantastic, even when limited by the source material that may reveal a less-than-stunning texture or some jaggy angular edge that suffers from improper anti-aliasing.

The Dolby Digital 5.1 mix is greatly appreciated, especially in the more open and more epic fight sequences that become staples of the later seasons. The dialogue is perfectly balanced and along with the sound effects, all placed flawlessly within the 3D space, although as expected, the experience is a bit front-channel focused with the rear speakers chiming in for very specific effects and modest use of LFE when appropriate.

Rather than dissect ten years’ worth of story in yet another review I would simply refer you to our past reviews for the individual seasons.

I will save this review space to comment on what you get exclusively in this amazing box set. While much of season-specific content remains the same, even to the point of being offered in SD, the actual episodes have been upgraded to MPEG-2 1080i quality in 1.78:1 While Blu-ray certainly enhances the richness of color it also reveals several shortcomings in the production; all of which find their limitations in the source material and not the creative efforts of the production team. As we get halfway into the 10-year run the bonus features start showing up in HD, some even in 1080p. So take a deep breath and let’s dive into 14 discs of Red vs. Blue: 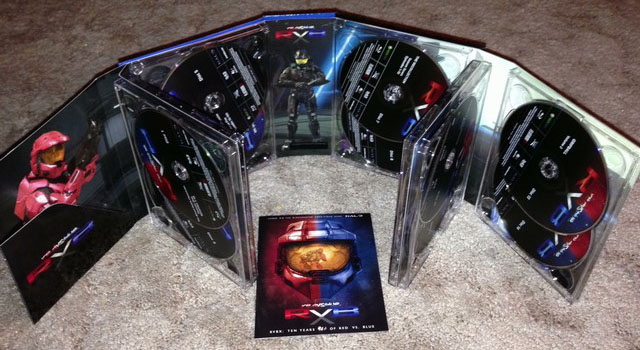 Disc One: The Blood Gulch Chronicles Season One
This disc features 5+ minutes of Outtakes, nearly 18 minutes of classics PSAs, and two feature-length commentaries; one from 2003 and an updated track recorded in 2010 with more people chiming in. And finally, you have a special edition of Episode 1.

Disc Six: The Recollection Season Six
Things get more serious this season, both in story and bonus features. “Recovery One” is a 16-minute feature you don’t want to miss followed by the standard 21 minutes of Special Videos, 6+ minutes of Deleted Scenes, 24+ minutes of Behind the Scenes, 3 minutes of Outtakes, and one of the better commentaries up to this point in the series.

Disc Seven: The Recollection Season Seven
We start with the 20 minute feature, “Relocated” followed by 19 minutes of Special Videos, 4 minutes of Deleted Scenes, 4 minutes of Outtakes, and an enjoyable two-man commentary with Burnie Burns and Gavin Free

Disc Eight: The Recollection Season Eight
“Holiday Plans” kicks off this bonus package with 12 minutes of hilarity followed by 20 minutes of Special Videos, 4 minutes of Outtakes, 11+ minutes of Behind the Scenes with a focus on the female cast, and another cool technical commentary.

Disc Nine: Project Freelancer Season Nine
17+ minutes of Special Videos get you started before diving into 3 minutes of Deleted Scenes, 3 more minutes of Outtakes, 27 minutes of Behind the Scenes, and an extremely interesting commentary track; especially if you are interested in the visual effects aspect of production.

Disc Ten: Project Freelancer Season Ten
PSAs are back and in HD with 16 minutes of amusing and not-so-educational content. 7 minutes of Outtakes, 5 minutes of trailers and my personal favorite commentary of the series wrap up this rather short list of bonus features.
Disc Eleven: The Blood Gulch Chronicles Bonus

This is the only disc in the box that isn’t an actual Blu-ray disc and features a massive assortment of SD extras, so much in fact they had to divide it into three menu options:

Red Team – this section includes footage from various press tours and festivals as well as numerous trailers, a Halo 3 Launch Mini-series, and some cool insider looks at Bungie and Microsoft.

Blue Team – this section starts off with all four parts of the Recovery One mini-series with commentary, a cool history of Red vs. Blue, information on the cast and crew, and plenty of community fan art and photos and a neat PAX Q&A.

Disc Twelve: Grifball Volume 1
This disc has three features including the 22-minute Expansion Mini-Series, the 11+ minutes Zero Tolerance Mini-Series, and the Rules of the Game PSA.

Disc Fourteen: Behind the Scenes of Red vs. Blue
Ten years of Red vs. Blue are summed up in a 42 minute Rooster Teeth retrospective followed by a repeat of some Season 10 content that goes deeper into the visual effects with more outtakes, deleted scenes, and a live table read. The Music of Red vs. Blue is also celebrated in a 17+ minute feature with interviews for Jeff Williams and Trocadero.

Red vs. Blue: RVBX: Ten Years of Red vs. Blue is an easy recommendation if you are just getting into the series, but it’s a tougher sell if you already own the original DVD’s. The nature of the machinima limits what Blu-ray can bring to the table and it’s really only the final three seasons that even start to showcase the HD goodness of their CG creation. I also have to question not only the ridiculous size of the package, but the fact that they used 14 discs to store what could have fit on 11. Griffball could have easily been combined on a single disc rather than waste two 25GB Blu-rays on 30 minutes of content each, and why does disc 14 repeat much of the Season 10 extras already found on that disc. Perhaps the size of the box and the number of discs is meant to offset the sticker shock since you will be paying anywhere from $125-$180 to add ten years of Red vs. Blue to your Blu-ray library.