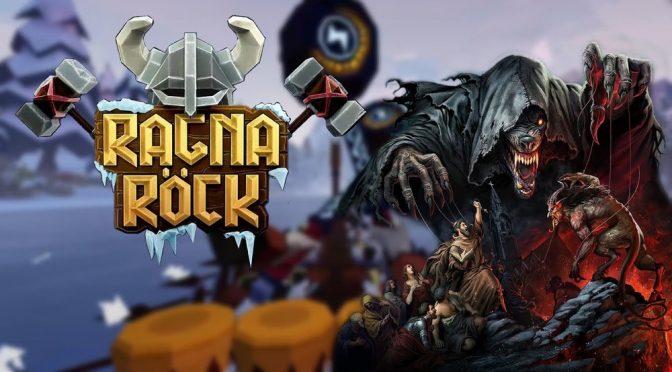 In a world where VR rhythm games like Beat Saber, Synth Riders, and Audica exist, it should come as no surprise that Ragnarock would join the genre, but what did surprise me was just how awesome it is.  Back in 2019 I got a small taste of virtual drumming in Drums of War, but that game used drums as a means of locomotion and attack.  Ragnarock takes drumming back to where it belongs; music…freaking awesome music…music I never knew existed but now I can’t get enough.  Apparently, there is this whole genre of Celtic rock and Viking heavy metal filled with blazing guitars, angry vocals, and even bagpipe solos.  Throw in some heavy metal pirate sea shanties and you have 30 of the most eclectic and addictive songs that ever made up a music game’s soundtrack.  I can’t wait to see what they add as more music is coming. 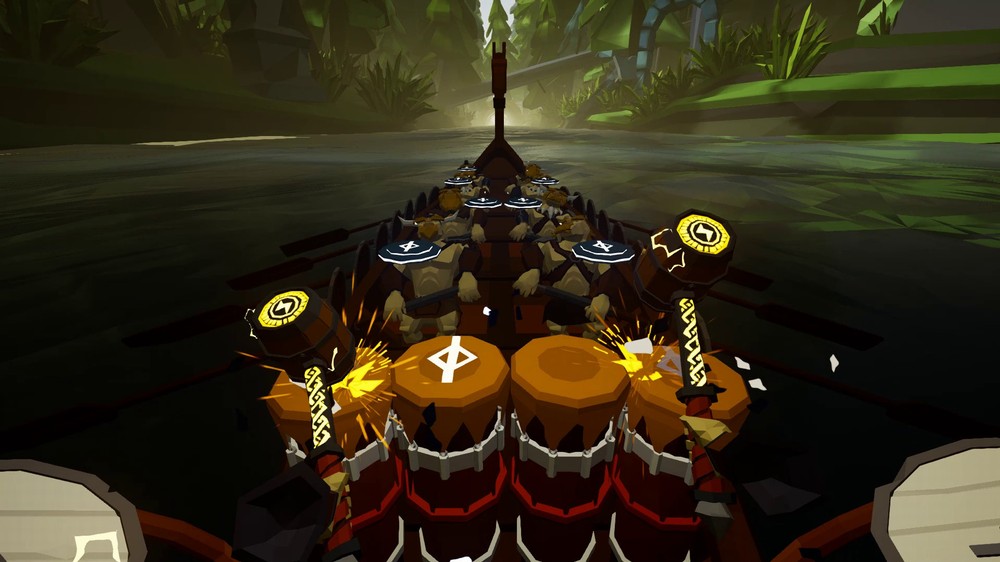 Ragnarock is delightfully simple to learn and I fear impossible to master.  Even on Rock Band I was only able to master the medium skill level on drums, but the music here is fast and furious and unrelenting from the start.  Each of the 30 songs has three difficulty tiers and each of those is awarded bronze, silver, and gold medals based on your performance.  At the time of this review I just finished my first Lv5 song with a bronze medal.  I’ve earned silver on a few lesser ranked songs and have bronzed the entire track list, but it wasn’t easy.  The one thing I have noticed though is that you do definitely get better with practice.  When I first started playing Ragnarock I was falling short of the bronze, but after a full week of playing I am now coming within just a few meters of the silver and gold finish line. 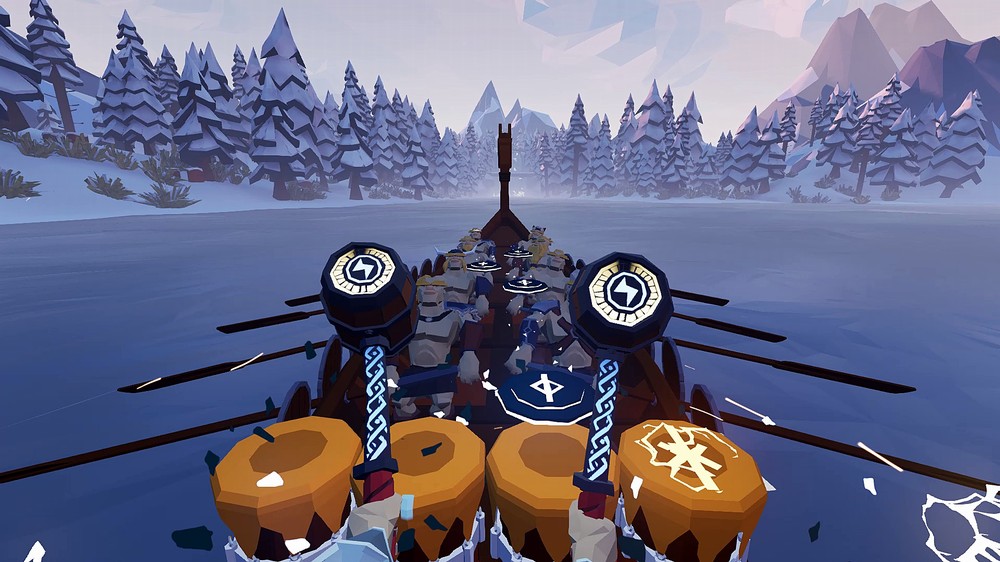 WanadevStudio has created something really special here, and it all begins before the music even starts.  Ragnarock immerses you in its world with a charming menu hub that grants you access to the song list, tutorials, settings, and leaderboards.  A rack of unlockable hammers is off to your right and a large exit door on the left lets you leave the game when your arms turn to rubber.  You can scroll the track list and preview a song by clicking on it before choosing one of the three numbered difficulty tiers, each with its own bronze/silver/gold medal award display. 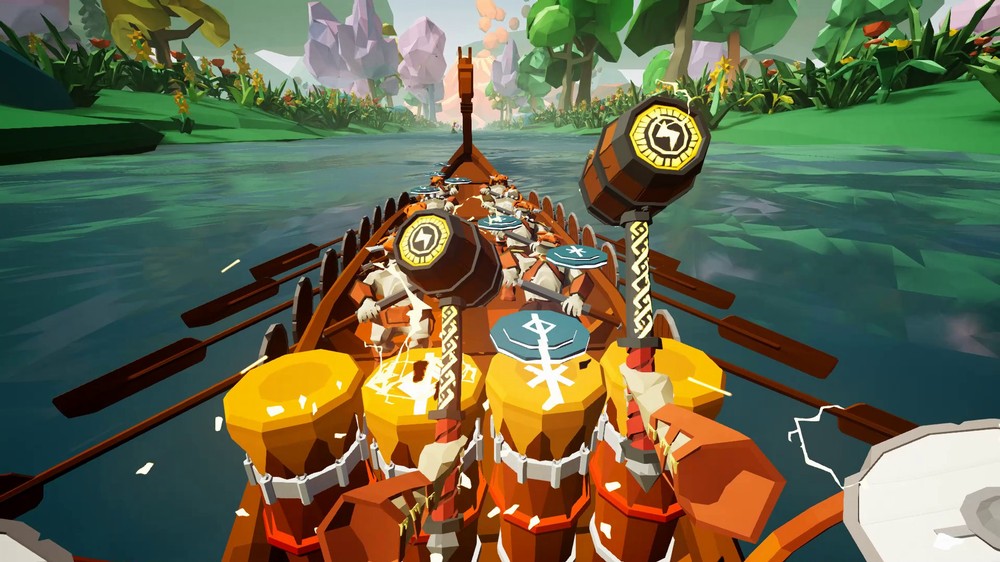 Once you’ve picked your jam you’ll find yourself behind a set of drums at the stern of a Viking longship with an eager crew of burly warriors ready to row in sync with your awesome beats.  Perhaps the feature that really sets this game apart comes next; the comfort customization which will definitely factor into how well you can play the game.  This quick multi-step process can be completed before each song, which is great for dialing in your perfect setup or quickly adapting to anyone else who might want to sit in for a few sessions. You can easily re-center the drums, adjust their height, adjust the hammer angle, and even reposition the shields (cymbals) on the left and right edges.  It might take some tinkering to get it dialed in perfectly, but your scores will improve when you do. 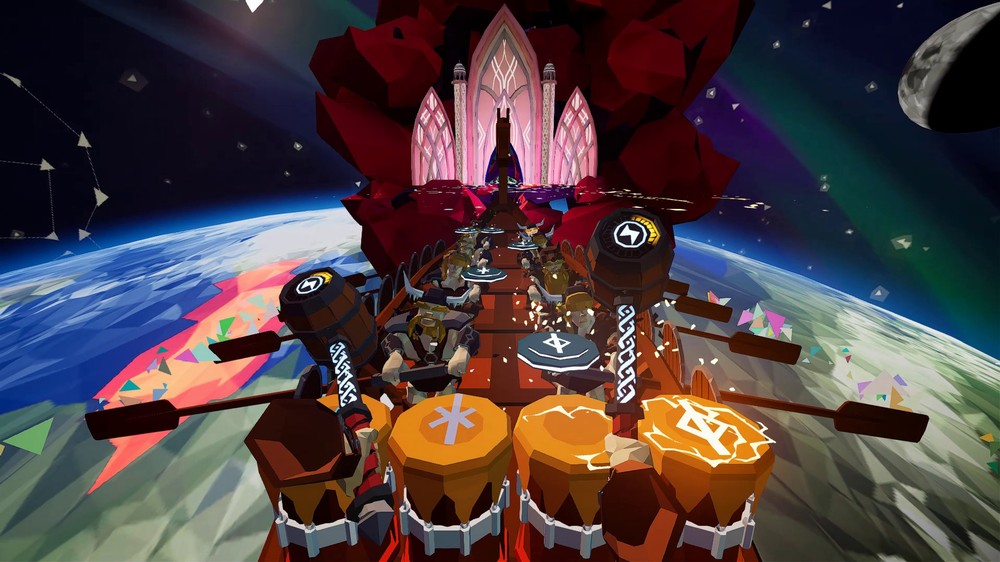 Once the actual game begins you see a stream of runic symbols start floating toward you in four lanes just like Guitar Hero or Rock Band.  All you need to do is hit the proper drumhead as the rune passes over it.  The symbol is momentarily etched into your drum to show if you were early, late, or perfect with your strike.  As with any music game you are rewarded with perfect hits and lengthy combos that all fuel into your hammers combo energy that can be unleashed as a temporary speed boost for your ship.  After hitting enough sequential runes your hammers and shields will start to crackle with energy.  All you have to do is smack one of the shields to surge your ship forward, but there is some tactics involved because you can choose to continue to build up even more energy for a much greater speed boost, but know that if you miss a single rune you lose any energy already built up. 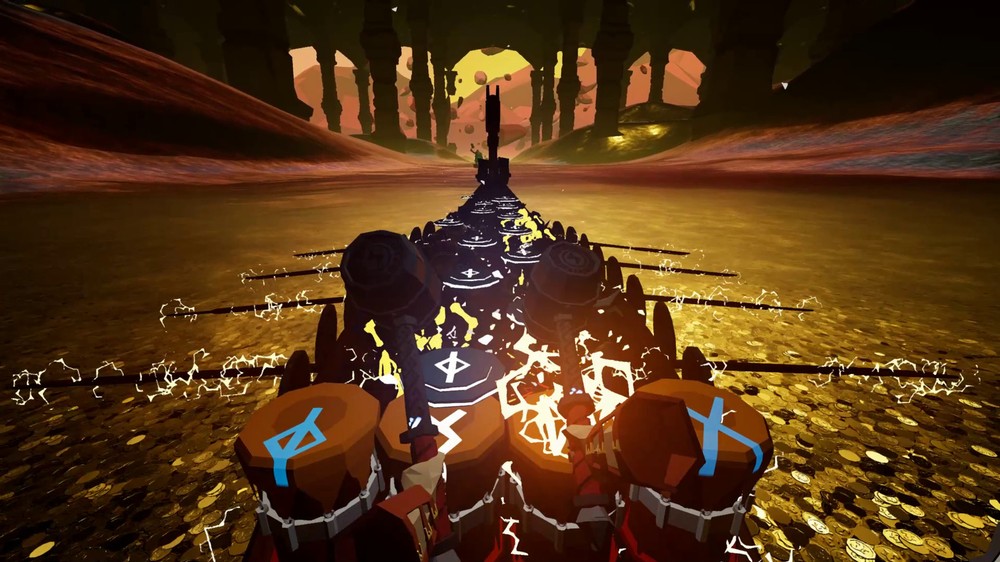 Even the scoring system for Ragnarock is tied into the theme of the game.  Rather than a simple progress meter or digital scores and combo meters each performance is ranked on how far your ship travels during the song.  The more notes you hit, the more accurately you hit them, and the number of combo boosts you trigger all help you reach the bronze, silver, and gold markers at the end of each journey.  Replaying tracks will let you race against a ghost ship that represents your best previous performance with your split distance shown on the bow of the ship.

It could take a lifetime to master the 30 songs that make up the game’s soundtrack, so you might want to mix things up with some multiplayer action.  Yes, you can play public and private games with up to six players.  Honestly, it’s the same experience as playing alone only you have other boats on the screen to distract you, but it’s still cool they included it.  And if you ever get tired of the included music you can use the track editing tools to import music from your own song library for play in solo mode.  So there is plenty to keep you busy outside the core solo experience. 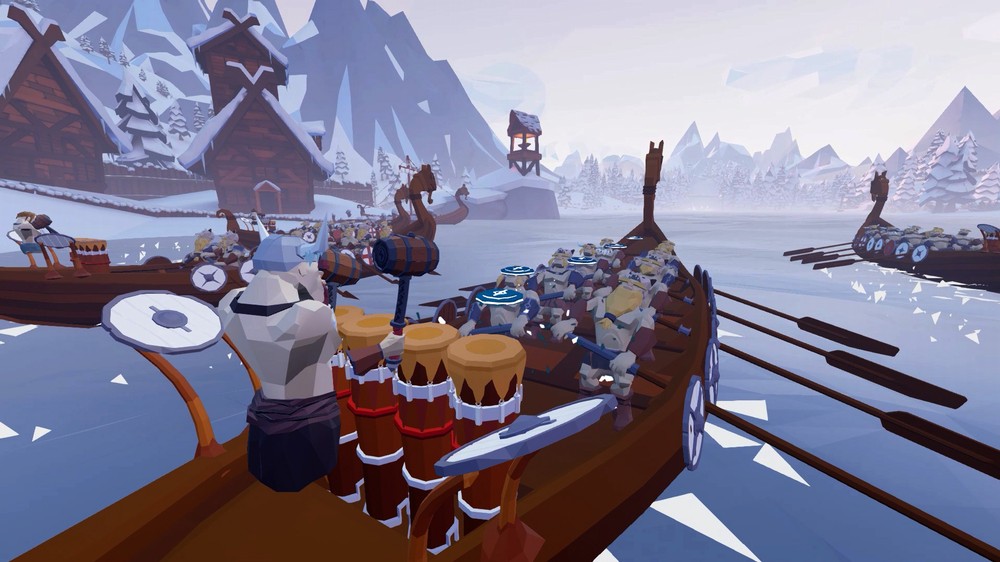 Ragnarock achieves legendary status not only with its epic song list but also in the way the note streams were created for each song so that no matter what skill level you are playing the hammer strikes always fall on a beat.  There is a lag offset option you can adjust if the music isn’t syncing with the video.  Once you find your groove and become one with the song it’s almost like the rune stream stops telling you when to hit the drum but instead, which drum to hit.  The game even carries over some real drumming techniques that will give real-world drummers a definite competitive edge.

Ragnarock is exhausting and the game even warns you going in that you should probably loosen up before playing.  Arms, wrists, elbows all start to turn to rubber after an hour or more.  The game can be played seated or standing and is available for all the major VR systems.  I played on the Vive and the Oculus Rift S and found virtually no difference with the quality of the game.  The Vive wands felt a bit more natural like I was holding actual handles on giant hammers, but ultimately the Oculus Touch won me over with lighter controls and less chance of slippage when my hands got sweaty.  Honestly, you can’t go wrong with any version of this game.

Words and screens cannot possibly communicate just how awesome Ragnarock is, so here is a trailer that showcases some gameplay and music, and as cool as this trailer is the game is infinitely better when you are actually playing it.  If you love a primal soundtrack loaded with heavy metal and rock and roll and miss the days of Rock Band and Guitar Hero then Ragnarock is a must-own title for anyone with a VR setup.  It’s simply glorious!