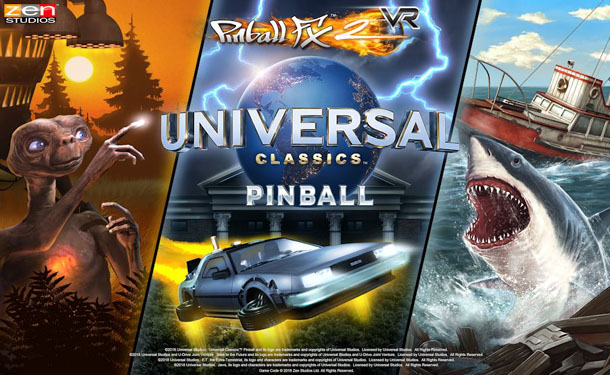 With the new Pinball FX3 taking the pinball world by storm on console and PC it is easy to forget about Pinball FX2 VR that released back in 2016, especially since we haven’t had any new tables drop since The Walking Dead that same year. After more than a year of silence we finally get some new VR tables and they are some of the best. Originally released last September alongside the core Pinball FX3 platform, Universal Classics Pinball featured some of the best tables of the 70+ library and they are certainly at the top of my favorites of the ten tables available for Pinball FX2 VR on the Oculus Rift. This collection of three Steven Spielberg blockbusters along with the immersion brought to you by virtual reality may change the way you look at pinball forever.

Along with new tables designs comes some cosmetic updates to your beach house pinball pad, mostly in the form of table specific scenery outside the sprawling curved windows, so don’t be surprised to see the Amity beach during your Jaws game. The rest of the layout remains the same with three pinball stations that can have their game swapped out using the sunken living room main menu or simply cycling the tables at each station.

The illusion of reality has never been stronger. Much like the old 3D support on the PlayStation you get that same depth of the table where the rails rise above the surface and the bumpers and targets become tangible objects, but now you can lean down and put your nose to the glass and examine these tables inside and out. Perhaps the most significant addition to the experience is you can now see the back vertical panel of the table.  This alone adds so much to the immersion of reality to the pinball experience when you can look up and see your score and other info on the digital display that had previously appeared as an insert in non-VR pinball games. Even the sound increases in volume if you lean closer to the speakers.

As with previous VR pinball adaptations the designers have worked in some super-clever 3D elements into the scenery outside of the gloriously detailed tables. An animated ET will cheer you on from the sidelines while a great white shark will snap at your feet when you drain a ball. And there is a very loud and distracting DeLorean revving its engine and driving/flying about while you try to restore Marty’s timeline. It’s a fun distraction at first and then easily ignored when it’s time to get serious about playing some pinball, and these are three serious tables loaded with content and endless addictive fun. 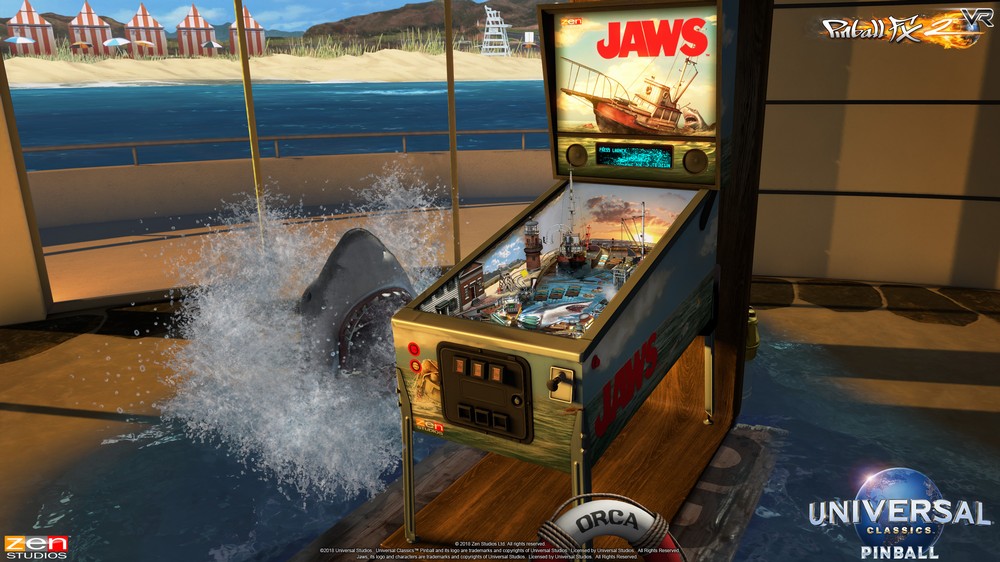 One thing is for certain…we’re going to need a bigger ball if you want to take on the great white shark from Jaws.   The Jaws Pinball table is easily my favorite of the three tables in this bundle for several reasons. The table design is as brilliant as it is gorgeous, with a sunset backdrop, 3D model of the Orca with Quint perched on the bow, a shark tank, small wharf, buoy bumpers, chutes and rails designed to look like the pier, a lighthouse, beach, and a giant fishing rod to launch the ball. The 2D shark art is impressive but can’t compare to when the 3D shark rises from the ocean and you must beat it back with your silver ball. Things get super-creepy at night when the table goes dark and you have only the glow of Quint’s spotlight to find your targets.   But the real showstopper is when the entire table starts to rock and tip in Raging Sea mode, madly throwing off all traditional flipper angles as realistic physics threaten to sink your ball. And in a really cool twist, there is even a mode where you get to play as the shark and terrorize the tourists. The environment outside the table has you floating on water with a yellow buoy to the left and a snapping shark on your right. 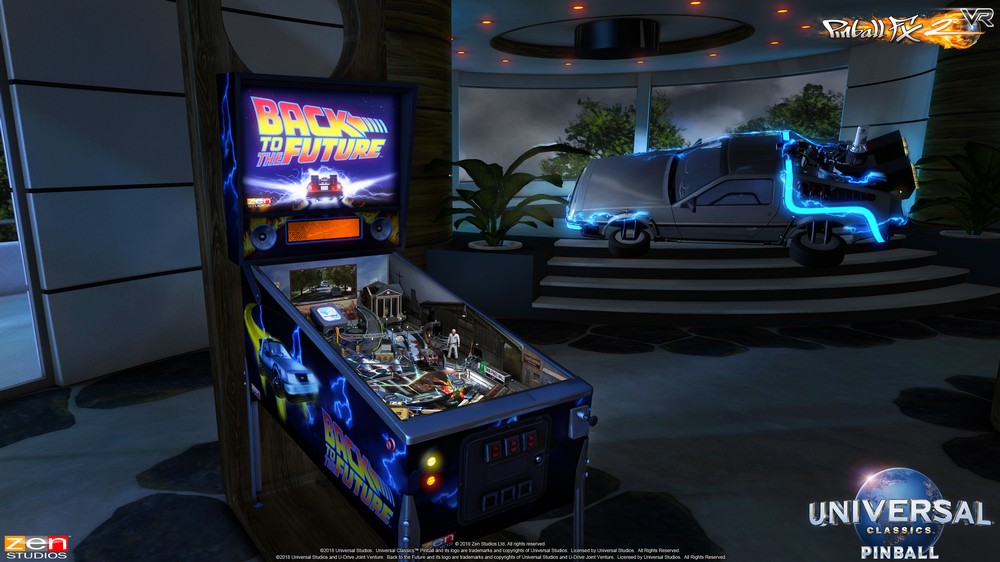 Back to the Future is a fantastic idea for a table and Zen Studios implemented it perfectly by having you pick the time you wish to travel to and subtly alter the table, effectively giving you multiple ways to play in past, present, and future. Not only will this change the various sound bites, you also get specific challenges and objectives as you travel through time in a 3D DeLorean that zips around the table. The rail system is awesome as your ball travels through the flux capacitor building up to 1.21 gigawatts. And when that sucker hits 88mph you’re going to see some serious…multi-ball action with fire trails burning up the table. Outside the table a DeLorean zooms around the floor, spins in circles and takes flight before vanishing in a trail of flames.

Last up is E.T. where you get to help Elliott and his adopted alien make his way home. This table is super-adorable with a 3D model of E.T. front and center (actually a bit to the right) and his giant spaceship near the top of the table that will frequently lift off granting you access to various missions like collecting the parts to build E.T.’s communication device or eating some Reese’s Pieces. There is quite a bit to do on this table including recreating the moonlight silhouette bike ride. The VR exterior to this table wasn’t as impressive as the other two with a 3D animated model of ET on the left and Elliot’s bike leaning on the right side of the table. 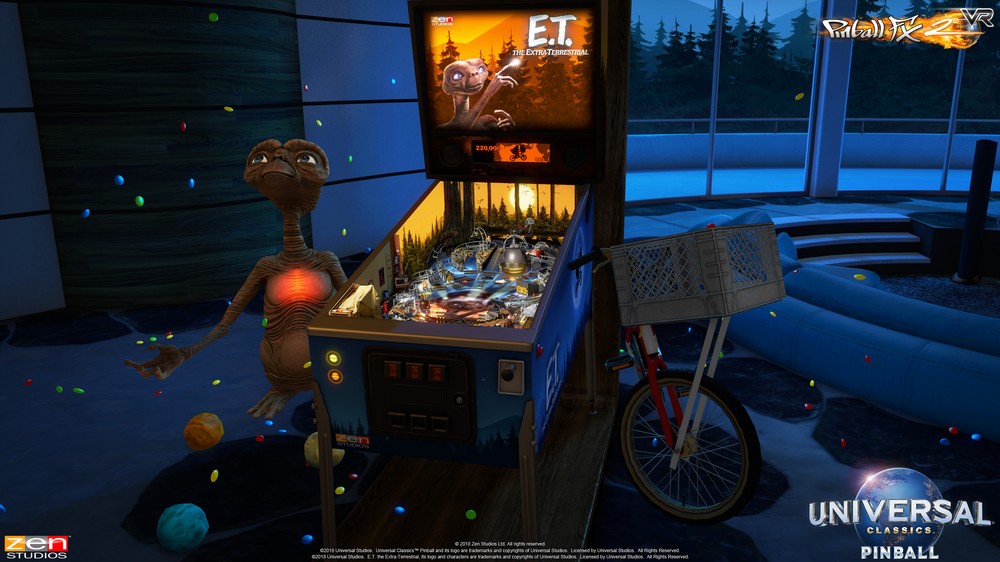 The last time I played Pinball FX2 VR I was using a 980ti card, but this time I had a 1080ti card and was blown away by the improvements. The framerate was as flawless as the ball movement and flipper action, even when I had seven multi-balls going in Back to the Future. In fact, the game was so smooth that when the table started rocking in Jaws I actually got a bit queasy.   The audio package was equally as good and there were plenty of audio samples, so the repeated dialogue isn’t as annoying as some other tables.

Universal Classics Pinball is a fantastic and much needed breath of fresh air for Pinball FX2 VR. Not only does it leverage three impressive movie licenses, it takes everything we love about those movies and turns it into compelling gameplay, and when you mix that with all the wonderful art, style, and animation from the pinball wizards at Zen Studios, you’ve got a universal hit on your hands. This is a steal for only $20 and a great way to showcase your VR setup. So grab your skateboard, eat some candy, and let’s go kill us a shark!