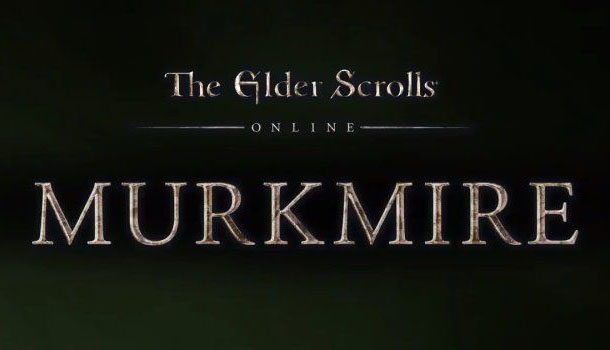 The Elder Scrolls franchise is one of my most beloved franchises spanning multiple platforms and containing some of the most unique and interesting characters to date. So when they reveal some of the world’s lore and traditions in new light, it’s always special in one way or another. Recently I had the opportunity to explore Murkmire, the latest add-on to Bethesda and ZeniMax’s Elder Scrolls Online world, with lead content and zone designers Jeremy Sera and Ed Stark prior to its release and I have to say that Murkmire doesn’t disappoint.

Now that Murkmire is live and I’ve had plenty of time to explore this intricate new zone found on the southern coast of Black Marsh I can relay my thoughts. While we’ve already been to parts of Black Marsh this newest addition sheds an entirely different light on the Argonians than what we are used to. For once you are not seeing them as slaves or even members of the Ebonheart pact but a race mostly at peace in their own element.

It’s something that is apparent from my very first steps off the little dinghy into the busy port of Lilmoth. It is here, much like my guided tour, which you will embark on an adventure in the employ of Cyrodilic Collections to seek out the dangerous exploration of an ancient local xanmeer with Famia Mercius and her crew. Without spoiling anything let’s just say that I felt like a Khajiit version of a certain explorer by the time I got out. 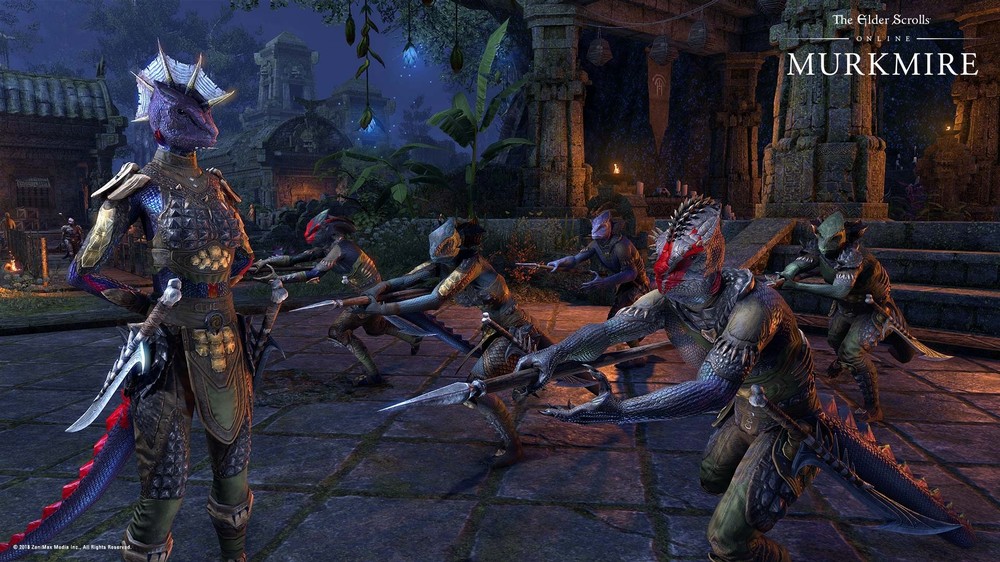 Maybe it was Famia Mercius’ infectious optimism and spirit (unmistakably portrayed by Courtenay Taylor) that made me feel that way as I headed in. She’s not the only character to garner my attention as Xukas, the root herald of the Bright-Throat Tribe, merely had to utter the word wamasu and I was hooked. There is definitely a certain charm to his character that is brought to life by who I am almost certain is voice actor John Bailey. These two are but a few of the well-crafted characters that you’ll find in Murkmire but you’ll definitely see plenty of these two.

Murkmire despite its name is a lush environment filled with all the trapping that you would expect to find in a swamp-based area at first look. But take a deeper look and you’ll find that unlike the rest of ESO things are a little different here and I like that in Murkmire’s approach. Most player by now are used to circumventing enemies and hostile fauna but they’ve never had to watch out for the actual flora too until now.

Everyone loves a shortcut especially when going from one quest location to another but that was before you had to avoid flora such as catapult cabbages, lantern mantis and static pitchers. Some of these are easier to spot and avoid but in the heat of battle sometimes things don’t work out as planned. Stealth, a tip from the designers, is a common factor that makes navigating these hazards a bit more manageable even in tight locations like xanmeers. There are even some floras that can only be gathered this way. 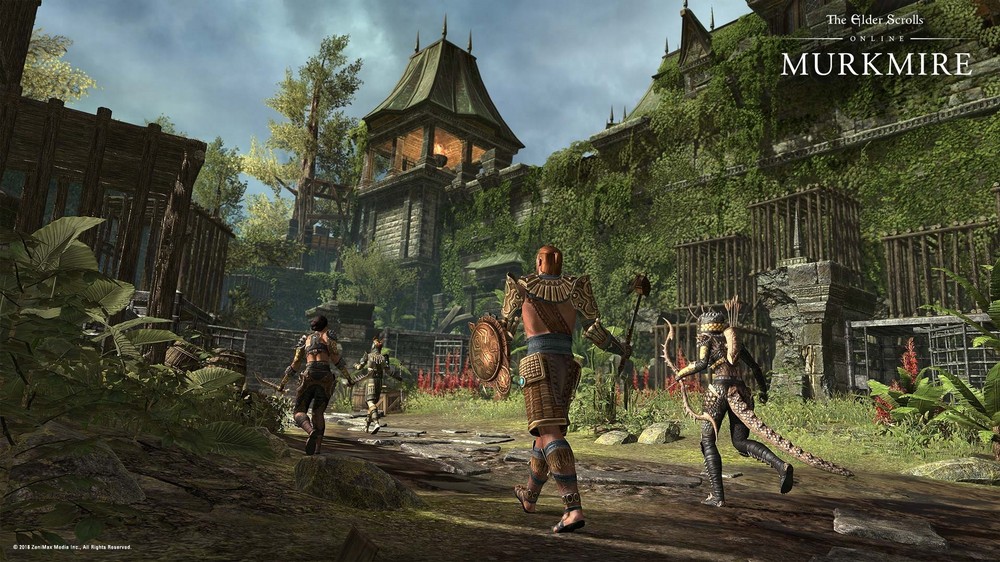 There are plenty of traditional threats such as the Blackguard, descendants of former inmates of Blackrose Prison as well as salamanders, crocodile and even bearlizards. Nope not making that last one up and while they are not the biggest creature out there they can be dangerous. Some truly nasty enemies however are the Bog blight and voriplasm that you will often find in some areas together. Voriplasm are wicked green slime monsters that will devour anything in their paths are particularly dangerous when they spit a portion of themselves as an Area of Effect attack. This not only does damage to anything caught in the radius but creates another smaller slime making them a particularly nasty nuisance.

Bog bights are a rather morbid type of enemy. As with their traditions when an Argonian returns to the Hist they are held down with Grave-stakes so that they cannot rise again. In a swamp area prone to flooding I can see this being a problem. So when these Grave-stakes fail you get undead Argonians that will chase after anything that gets close. Oh and just because some of them are still half stuck in the ground does not make them less dangerous only more pissed off so stealthily avoiding these foes are recommended unless otherwise directed.

As a largely stealthy Khajiit this new zone seemed tailored to my playstyle though an Argonians I suspect would feel much at home.  Of course players will also get to see the mostly familiar varieties of Saxhleel, the native name for Argonians as they call themselves, but even Murkmire has a few surprises. Most Argonians are shall we say mostly friendly but there are some like the Dead-Water Tribe that well they don’t like outsiders. This tribe is also made up of the never before seen breed of Argonian known as the Naga. Like their name suggest they are more snake like in appearance than what you’re used to in Tamriel. 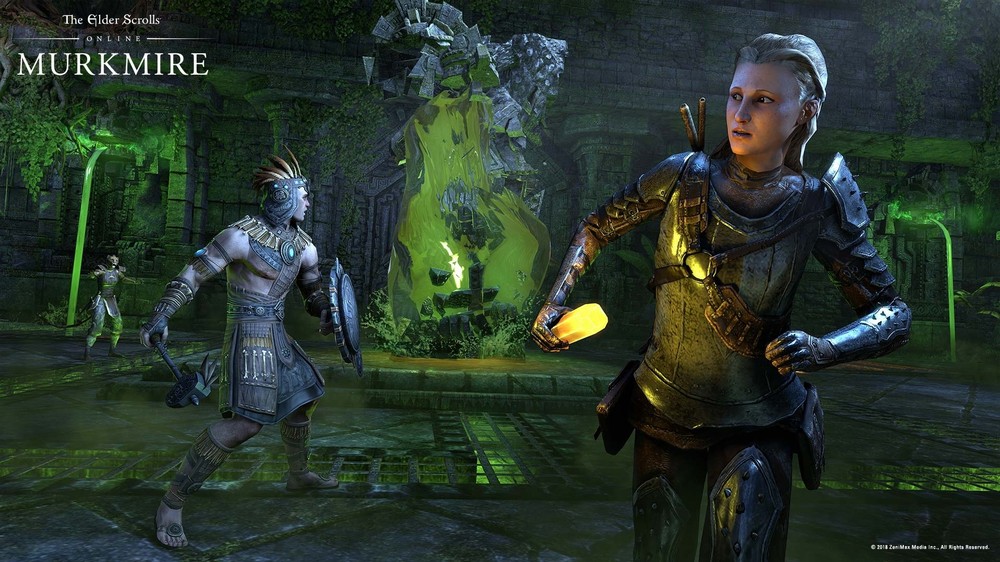 What I am used to is attention to detail and the developers are still masters of their craft. Murkmire is not purely all swampland as it in fact three separate biomes from the knee deep lowlands to the tree heavy forests and finally the highlands where players can find some rather interesting sights. The transition between each of these areas is also subtly done to create a unified presentation. The Saxhleel are a race that survives by living a life of impermanence so you will see sunken structures dotted all over Murkmire.

While some are beautifully designed Aztec like ruins others are reminders of outside attempts to settle here much like Blackrose Prison. This is why you will see a lot of stilt homes and buildings. Everything is designed by the Argonians with the premise that it could be gone with the seasons. Atmospheric effects such as fog and overcast skies really add to the swamp vibe that they were going for and drive home the shifting landscape that is part of their culture.

When you’re not exploring Argonian culture you can visit and compete in the arena found in Blackrose Prison. This at one time penal colony is now the proving grounds for the Blackguards. If you can make it through all five stages of this four-player leaderboard arena you’ll be rewarded with some sweet new powerful weapons and item sets. I particularly liked the new Sigils that are incredibly useful like the Soulgem Sigil. This sigil is like the clutch second chance for your dead teammates. Of course using the Sustain Sigil for instance, which greatly increases all regeneration stats, can keep you from needing to use that Soulgem one. And after you win or lose you can sit a spell and listen to Tar-Lurash play in Lilmoth to let your hands rest. 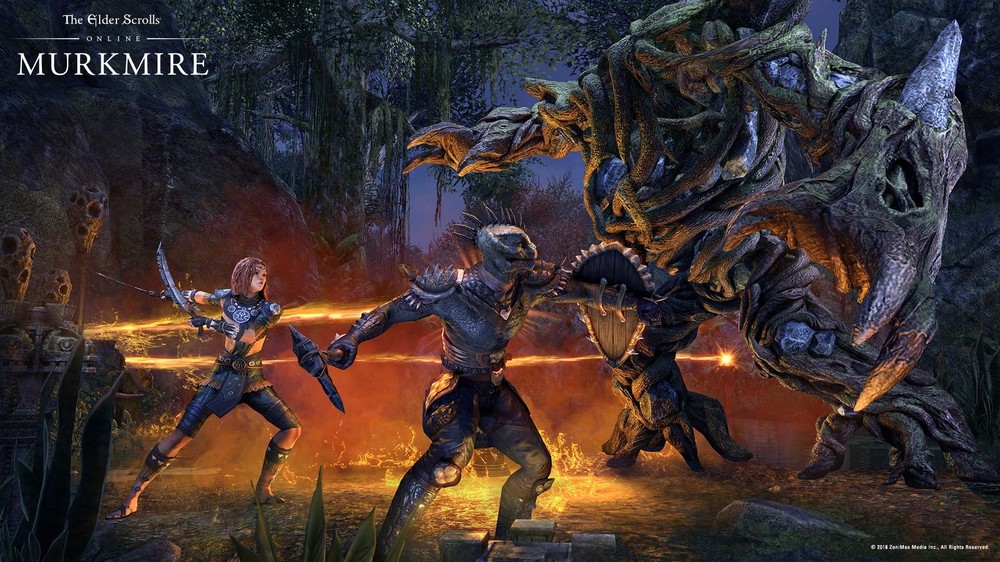 On the grand scale of things, Murkmire also coincides with Update 20 which adds new features to two areas of the ESO experience. The first is fully destructible bridges and Milegates which act as blocks or delays for the opposing teams. Of course they added new goat paths to help circumvent obstacles at the risk of walking in a deathtrap. Teams can also make use of new outposts to execute attacks or defend when things get dire.

If you want a break from the fighting the other improvement is found in the housing front. Now mistakes can be instantly fixed with an undo tool. Then again if it was right the first time you can redo it just as easy. What I really liked was the newly added item linking because I can now move entire groups of complex designs without having to recreate it in another area. This would be particularly useful in the incredibly vast and new home Lakemire Xanmeer Manor. This place is actually built with part of it UNDER the lake itself making it by far the coolest looking house you can buy eventually.

While Murkmire is not a full blown expansion, it more than makes up for any limitations with its intricate design, storytelling and characters. Unlike Wolfhunter which was more designed to be a group excursion, Murkmire takes things back to the play at my own pace explorative nature that is more my style. What really surprised me about Murkmire is that it really brought something genuinely new to the Elders Scrolls world and makes you see a normally downtrodden race in a whole new light. For a player that enjoys story driven content Murkmire hits a mark that makes me absolutely recommend this to anyone even remote interested in it. If you haven’t locked in those 2000 Crowns or already dived in for you ESO Plus member they highly recommend checking out The Elder Scrolls: Murkmire DLC for PC today.