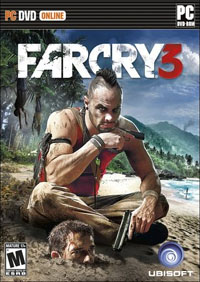 I’ve played a lot of first-person shooters over the years including 2004’s Far Cry which sets you on a series of islands fighting for your life against mercenaries and science experiments. The open-world nature of the game was what really drew me in to the point that I even dove into its console ports without a second thought. The series has changed hands since the first release and a sequel set in Africa was released in 2008 though I found it lacking despite being able to dynamically set things on fire. It’s been 8 years since my first adventure in the Far Cry franchise and I can happily say that Ubisoft’s newest addition, Far Cry 3, is single-handedly the best in the series so far.

It isn’t insanity that makes me say this but Far Cry 3 has completely regained my attention like the series did back then but not just for the same reasons. The game starts off like a movie featuring a rich kid’s paradise filled trip to another country to party and get wasted with friends. Actually that’s exactly what happens right up until Jason Brody, the main character, ends up in a bamboo cell with his army trained brother Grant. It’s here we meet the crazy mercenary named Vaas who seemingly lets you escape after he unmercifully kills your brother. After you flee for your life, and are forced to kill for the first time, you wake up in a village after a nasty fall from a collapsed rope bridge.

There you are greeted by an ex-army man named Dennis who sets you on your path to save your friends… oh and liberate a country while you’re at it. As I started playing I quickly fell into the role of Jason Brody, and not just because I share his name. It’s more to do with the fact that the basic controls are seemingly consistent with previous installments especially when using the traditional keyboard and mouse setup. The only time where I found a controller useful is when driving a vehicle throughout parts of the campaign if your so inclined to using them. The thing about Far Cry 3 is that while using vehicles is handy to get around the island, you’ll miss the beauty of the island itself that you’ll experience up close on foot. Just don’t expect the beauty to always love you back. 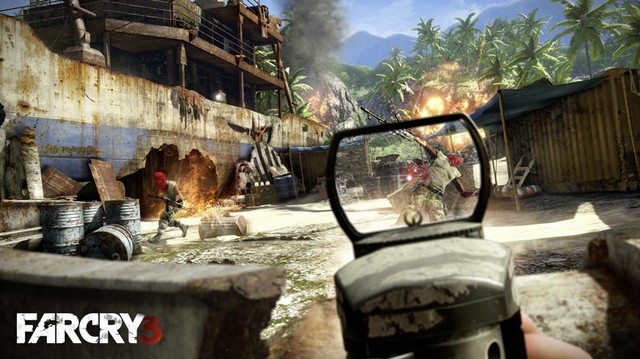 A trip through the beautiful Rook Islands will wield many surprises along the way including caves, hidden tombs, and water holes hidden amidst lush terrain and sandy beaches. There are also plenty of reasons to explore the world and they heavily have to do with you becoming strong enough to save the ones Jason cares about most. From the moment you first reset a radio tower to the first kill of a little boar; your actions define you and prepare you for the battles ahead. You see Far Cry 3 is a lot like a lot of the big RPGs out there where every kill, mission completion and hidden collectible gains you experience until you level up and gain skill points.

Unlike most RPGs this shooter has a unique way of showing that you’re getting stronger via the Tatau (tattoo) on your arm. Players will start out being able to gaining abilities like basic takedowns and the slide ability and then graduate to better archery skills, advanced foraging and better takedowns as the story progresses. For each skill you purchase another part of the Tatau is inked on your arm until the design is complete. I have to say that while that part is really cool and immerses you into the culture and feel of the experience, I really enjoyed the crafting and survival aspect of the adventure more.

Initially you are given enough money to buy a pistol to defend yourself, but you’ll soon find that you need more serious firepower down the road to survive. However you can only carry one gun and limited ammo; that is where crafting comes into play. Normally I’m not a big fan of crafting items, even in RPGs, but unlike them it’s a necessity in Far Cry 3. You have to craft everything from holsters, ammo pouches, quivers and even wallets and loot sacks to get very far in the game. Luckily your crafting materials are found all over the place in the form of plants and animal hides. 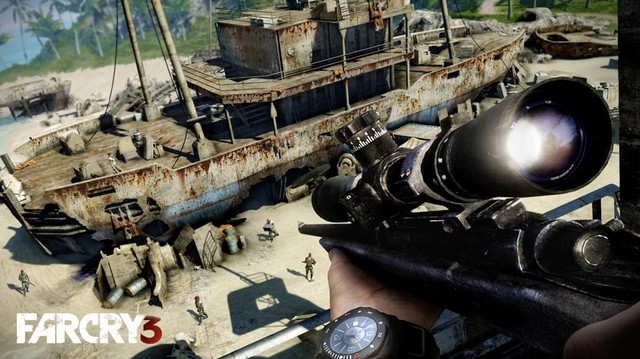 While plants won’t put up much a fight don’t expect the wildlife to stand there and get shot at willingly. The world of Far Cry 3 is a living and breathing entity where animals will go into fight or flight mode at the slightest provocation and humans will actually mourn death instead of walking by as if nothing happened. There are so many AI routines running under the world’s shining exterior that it boggles the mind. You could fire one round of any gun around certain animals and get pecked or stampeded to death. You can often use the wildlife to your favor in sticky situations or as acts of subterfuge like shooting the door open of cage containing a tiger and letting it do the dirty work for you when taking over an outpost.

Outposts are one of many things to do in Jason’s story as you explore the Rook Islands. For starters, you can do supply drops via a quad, races on jet ski or boat, and even trials indicated by red rocks in designated locales across the islands. There are also a lot of collectibles to be found scattered everywhere including SD cards that reveal seedy dealings across the island, as well as the missing letters of WWII Japanese soldiers. There are also a lot of hidden relics to find as well. For the not so avid treasure seeker there are maps for sale in any shop to show you the general location of each one. It’s up to you to do the rest of the leg work.

As I said before walking through Far Cry 3’s world is a great way to take in the beauty of the islands. The folks at Ubisoft Montreal have created a world that absolutely stunning and one that lives up to the tradition that this series is known for. You can stand on a rock off the shore of pearly white beaches and look through crystal clear waters to see a giant manta ray swimming by. If beaches and the sound of wind and water as it flows upon the sand don’t suit you can retreat to the beautifully created lush forests full of wildlife or the high mountain terrain where you get a grand few of the area around you via camera or sniper scope. If your PC and graphics card can handle it I absolutely recommend cranking the settings up to Ultra with DirectX 11 enabled to see the developer’s vision the way it’s meant to be seen right down to the realistic textures of people’s skin and clothing. 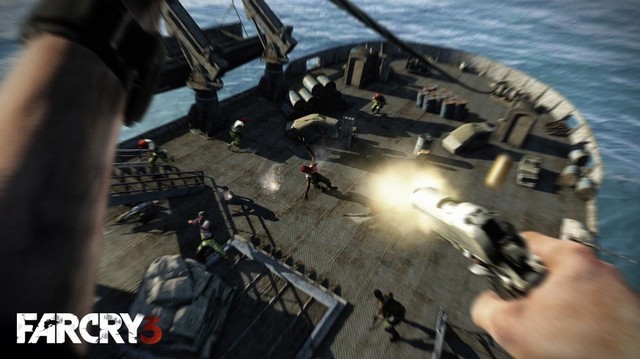 Far Cry 3 features amazing graphics but it also contains and equally impressive audio package that really puts you in the world. If you want you can stand on the shore after the sounds of a gunfight end, close your eyes and listen to the soothing sounds of water and birds. I had a feeling the audio was going to be good after hearing M.I.A.’s “Paper Planes” during the opening video amongst the voices of the main character and his family and friends. But the audio is more than a way to put you in the mood to play as it also can be utilized to keep yourself in one piece. By listening to the world around you can determine what animals are around you in the wild or enemies so that you can prevent detection if possible. If you have a 5.1 Audio setup you can practically detect where animals are long before you see them if you’re the cautious hunter.

Far Cry also has a lot to offer to the more ambitious player. For starters there is multiplayer that features all your favorite modes including team Deathmatch or territories based matches. What makes Far Cry’s multiplayer modes different is that there is team economy system in play. Every time a player helps take a location or aids a fallen teammate they earn points to call in Pysch Gas to turn the tides of battle in unexpected ways. Players can also design their own maps for added insanity via the Map Editor. 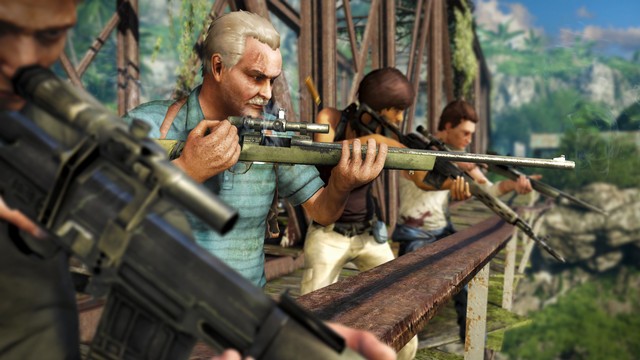 While the multiplayer mode wasn’t for me I really enjoyed the Co-Op mode featuring a separate story based around the same island. This story follows four down-on-their-luck individuals looking for a way to escape their own private hells. The story seems to take place before the events of the main story though you’ll find out that key players from the main story are involved like Vaas across this six chapter story arc. I actually enjoyed the faster paced nature of this story especially when I experienced it with a full crew online. There are already a strong number of people in the world playing the co-op mode and I have to say that there were some real team players out there that I’ve ever had the pleasure to play with.

Far Cry 3’s story depicts one man’s survival, sacrifice, and dive into the depths of insanity as he risks more than he bargained for to save the ones he cares about most. Ubisoft did a masterful job of bringing back the essence of the original predecessor while crafting a much darker story. Far Cry 3 features a fantastic emotional story with solid controls, breathtaking visuals and a co-op mode just as energetic as the main event. This is by far one of the best shooters that I experienced all year and I absolutely recommend picking up Far Cry 3 for PC today. 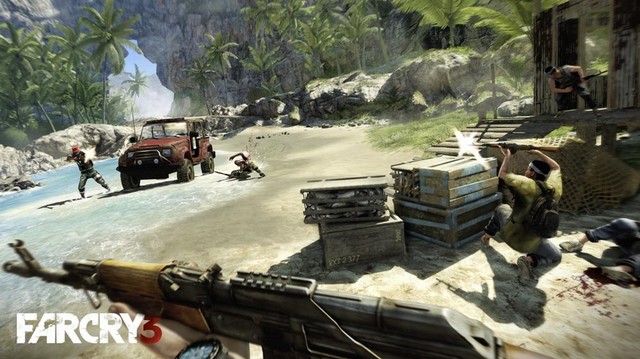 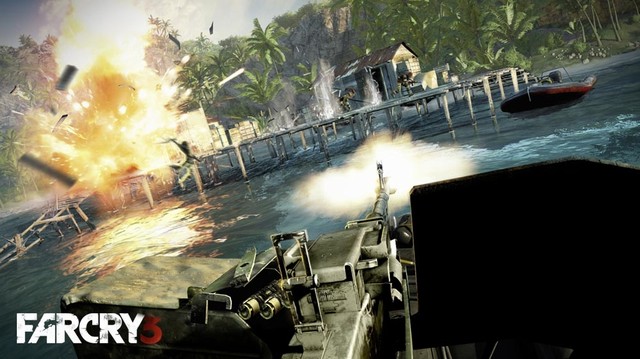 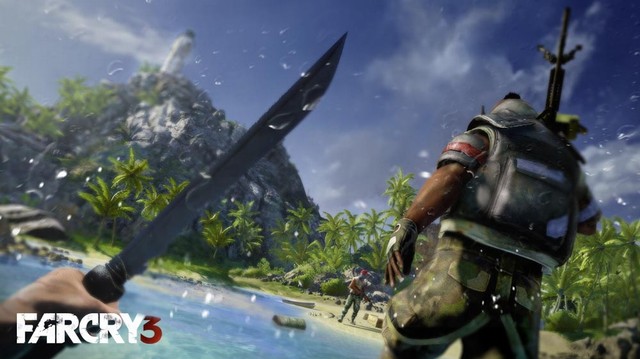 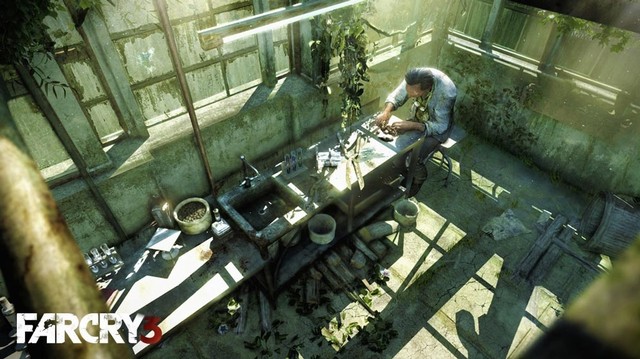 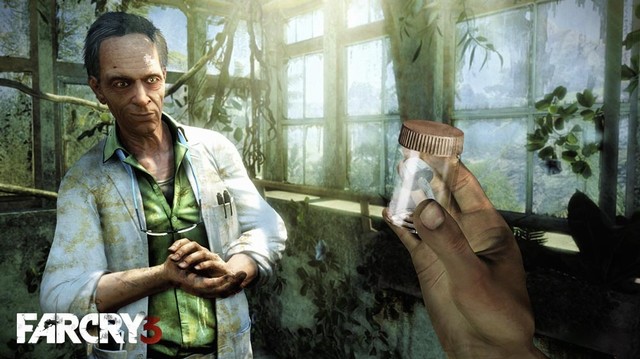 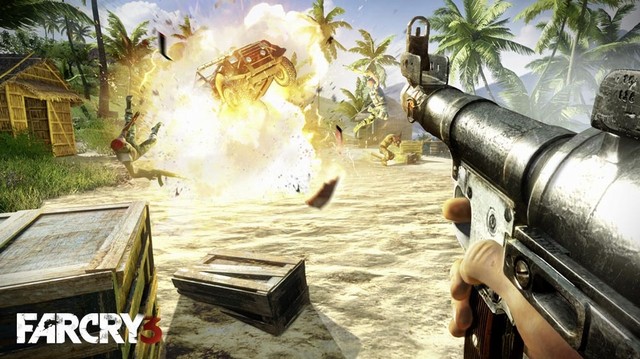 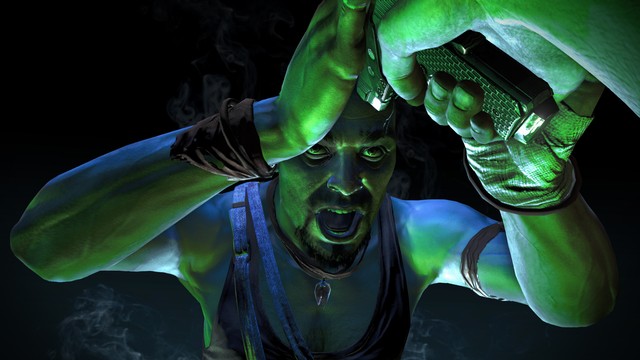 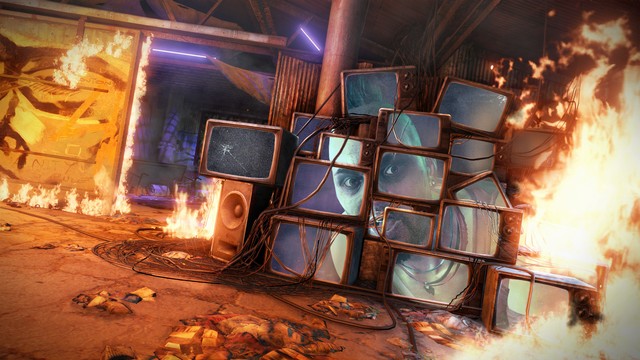 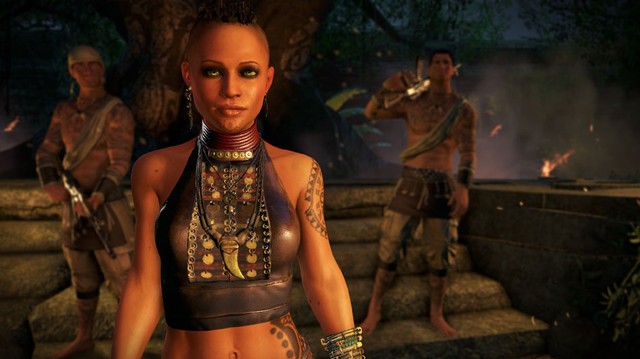 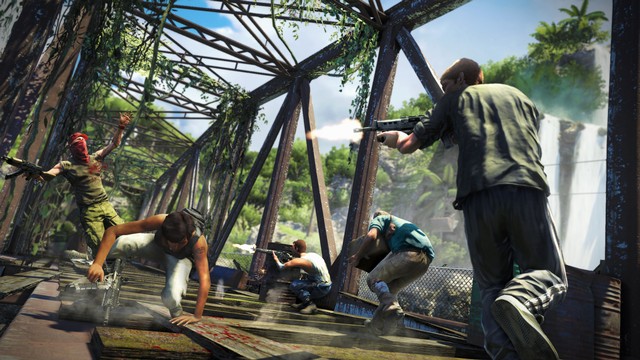 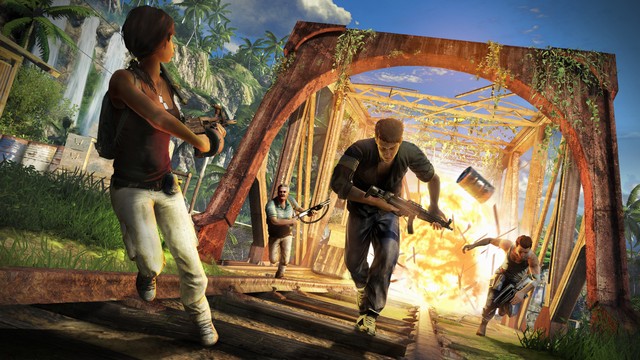 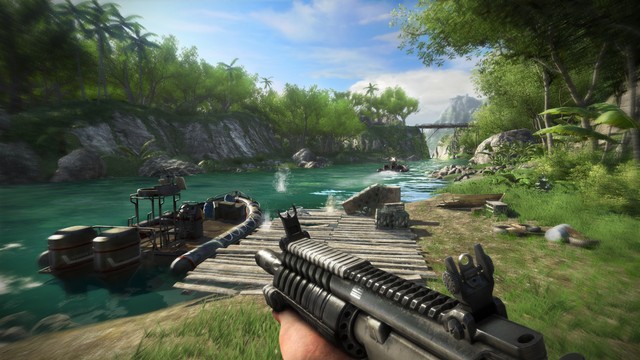 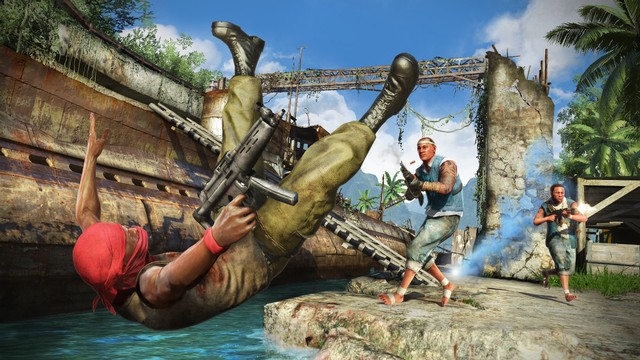 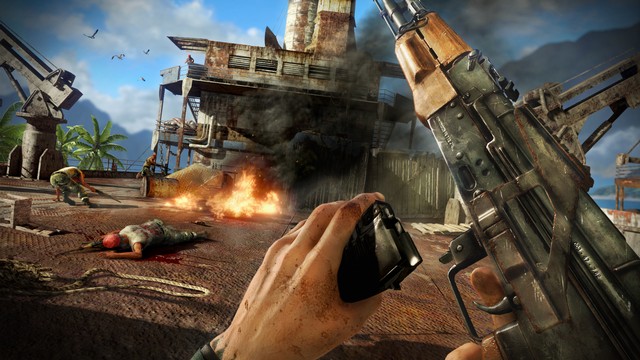 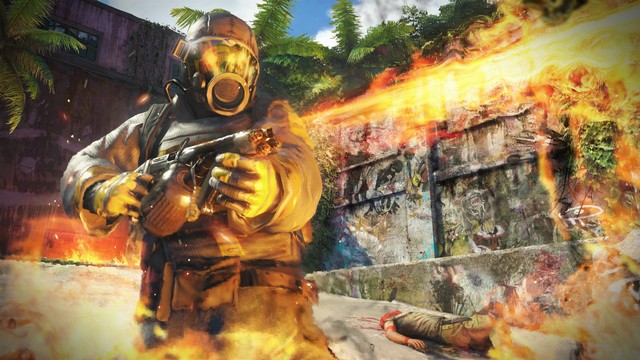 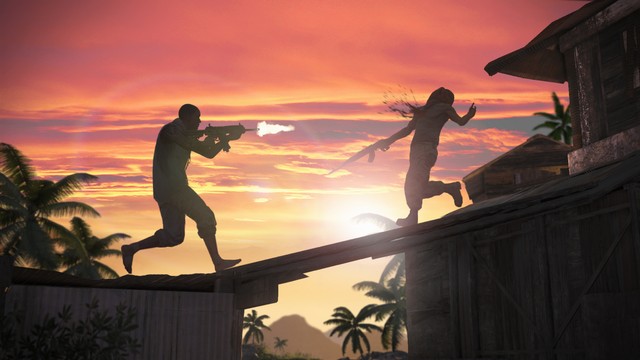