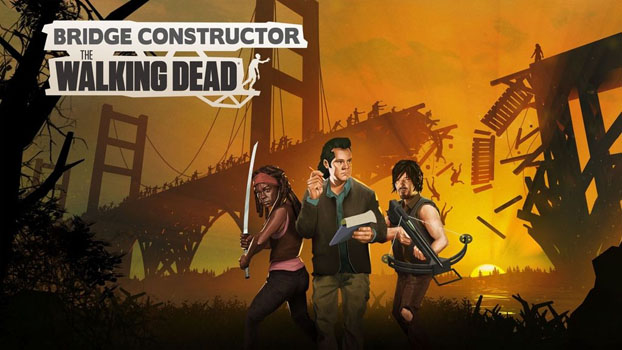 A game about building bridges; structurally sound bridges, seems that it would only appeal to engineers, yet somehow I’ve been enamored with the concept since I got my hands on Bridge Construction Set back in 2003.  There have been other bridge building sims to come along since; most recently Poly Bridge 2 and of course my favorite, Bridge Constructor Portal, that expertly blended the Portal franchise with structural engineering.  Now the Bridge Constructor franchise expands into the world of The Walking Dead with an all new game that goes beyond mere bridge building and introduces all-new strategic elements to the formula.

Bridge Constructor: The Walking Dead borrows heavily from the AMC zombie series with characters and scenes from both the TV show and the Telltale game series.  Eugene plays a prominent role, both as the genius behind some incredible bridge building as well as all the flowery language we’ve come to expect from the character.  You’ll even get to hang with Daryl and Michonne before it’s all over, as this is the first bridge builder to include story panel cutscenes as well as controllable characters you can “program” during the actual game. 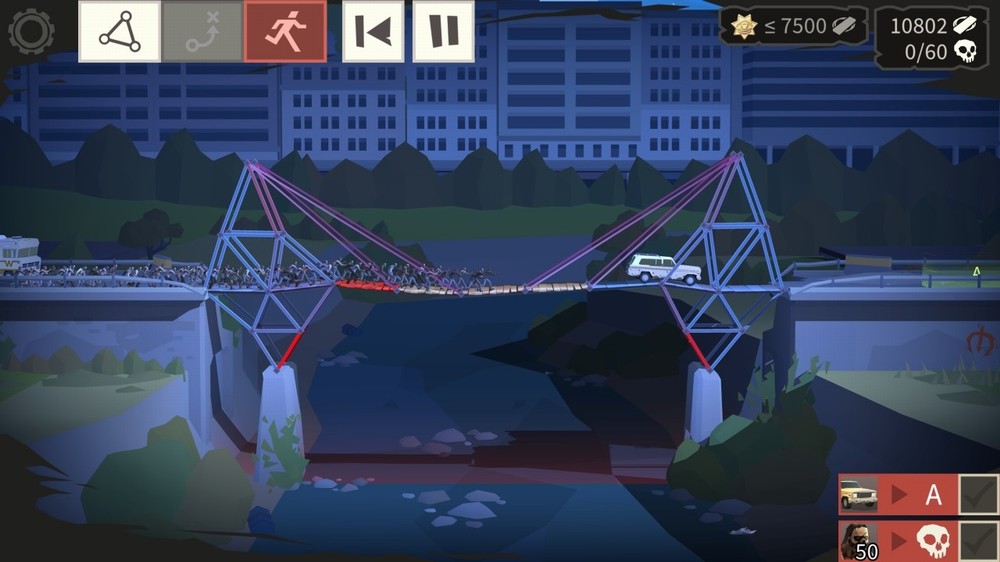 Gameplay is presented as multiple phases.  You build whatever bridge is necessary and in many levels you will get to control certain characters by using simple instructions.  The levels will have various control points where you can program a sequence of instructions for that character to do when the reach that point.  The goal is to ultimately reach the green safety zone but the path can be quite elaborate.  You can command characters to go either left or right or up and down if at a ladder.  You can instruct them to activate certain devices, often with zombie-crushing results.  Some characters even have specific actions like Daryl who can fire a limited amount of arrows and Eugene who can toss a noisy doll that will attract walkers.  Some puzzles will even have you programming multiple characters to work together at the same time.

As expected there is a lot of trial and error and rarely do you get it right the first try.  You can click the button to start the real-time sequence and your bridge might collapse immediately or maybe later under load or a character will be in the wrong spot or facing the wrong direction.  Some characters can actually fight/kill walkers as long as their are facing them.  There is no shame in returning to the build phase or the programming phase to make micro-adjustments until you get it right.  This is especially the case when it comes to resource management.  Winning a level merely requires you to check off the primary objectives but perfectionists will also want to kill all the walkers in the level and earn that gold badge for meeting the special resource restriction challenge. 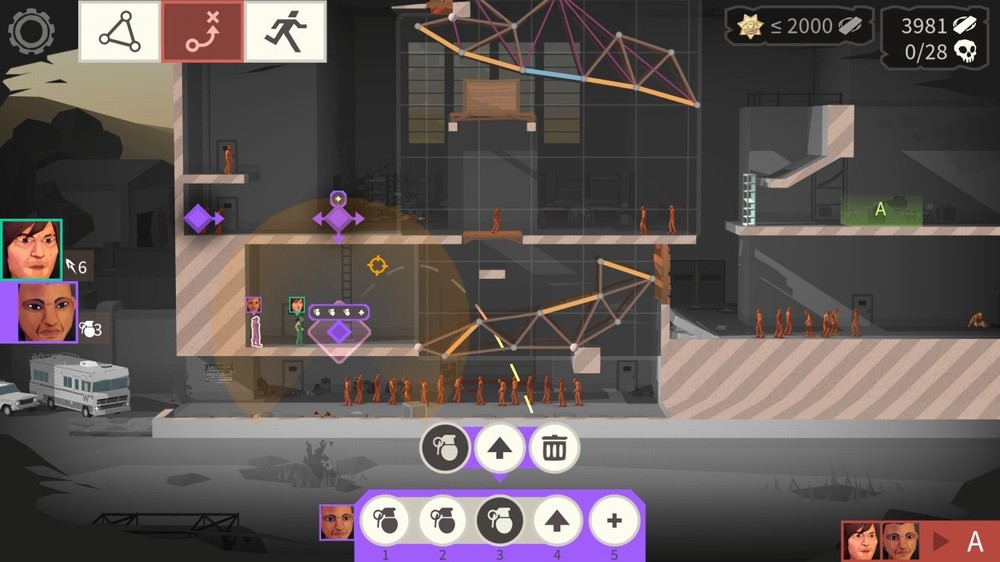 In each level you are asked to complete it without going over a certain amount of materials.  These materials all have a cumulative value based on type and how much you use.  Wood has a certain value when used as support but increases greatly when converted to roadway; the same with steel girders.  It’s all too easy to create a stable bridge with unlimited materials, and I do appreciate the fact that the designers allowed this just to keep the game flowing, but trophy hunters and perfectionists will be compelled to go for the gold.  It’s pretty fantastic how it works because you can build your bridge then start removing various elements or maybe switching them to affect weight and balance.   The physics are so accurately modeled that even a single piece can be a linchpin in the overall design.

The bridges you build are as varied as the situations that require them.  You might be building walker traps one minute then trying to jump an RV across a gap in a highway bridge.  The situations and their solutions slowly ramp up in difficulty with a nice smooth progression that continually adds newly learned abilities as well as access to more unique building materials.  Since the game is purely physics based there is no single solution to any puzzle, which adds greatly to the appeal and replayability of this game.  You can even save your favorite construction designs, but it would have been really cool to share them with the community. 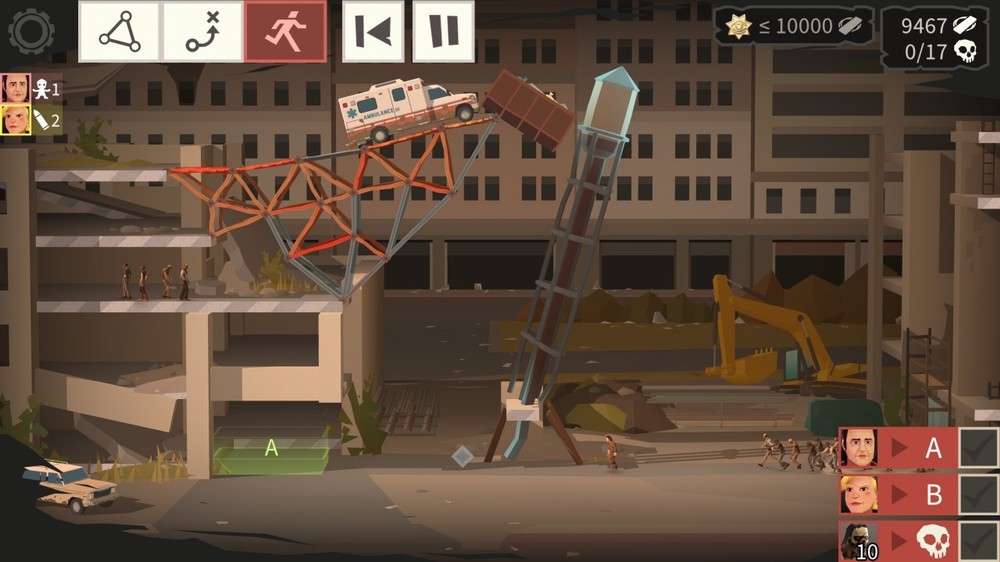 The presentation is charmingly simple with polygonal graphics and flat cel-shaded textures for the environments and construction pieces.  The cutscenes have a hint of Telltale cel-shading style from their adventure series but definitely more primitive with low poly counts and sharp angular edges in the close-ups scenes.  There is some forgettable music and no dialogue, which means you get to read all of Eugene’s geek-speak; easier said than done and I admittedly checked out and skipped much of his verbosity.  He’s fun to listen to in the TV series but annoying to read on the page.  The overall story and conversations in the game are often childish and easily skipped.  After all, we’re here to build bridges.

The game plays fine with a mouse (no keyboard necessary) or a gamepad.  I found the mouse was a bit more accurate and better suited when it came to interacting with construction elements, dragging, resizing, selecting and switching.  The mouse wheel zooms you in for close-up work and the UI was simple and intuitive when it came to selecting characters and programming their actions.  The system requirements are ridiculously low, and this game can run on a potato and still play awesome. 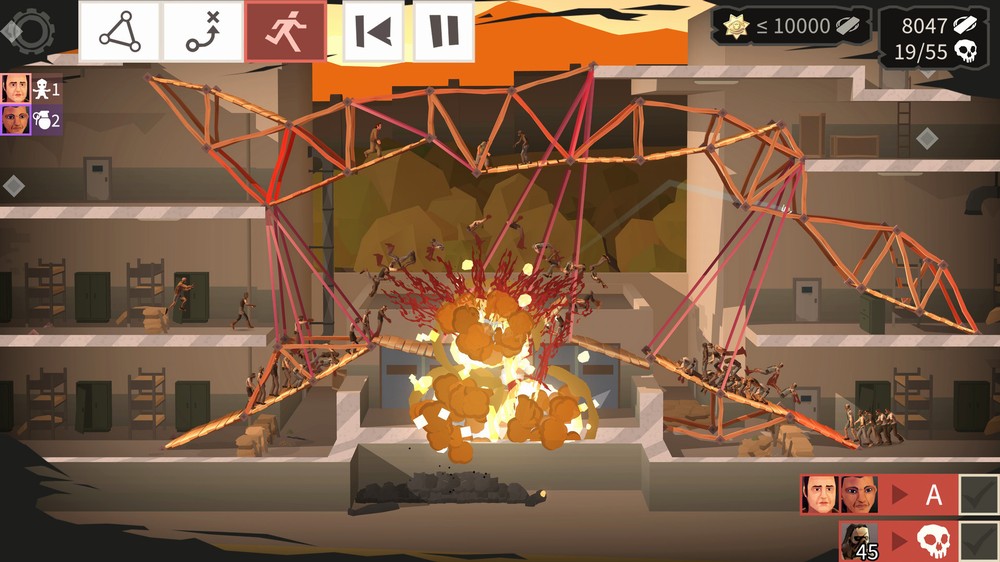 I had a blast with Bridge Constructor: The Walking Dead; it’s the combo you never knew you wanted until you taste it.  The addition of programmable characters and their scripted actions only adds to the engineering elements of the game, creating the ultimate version of a Mousetrap game that is so rewarding when it all comes together.  I won’t even begin to guess at completion time since it’s going to factor in how smart/logical you are as well as your desire to earn those gold badges and your patience for trial and error gameplay, but for only $10 there is no way you won’t get your money’s worth with this awesome undead bridge building game.