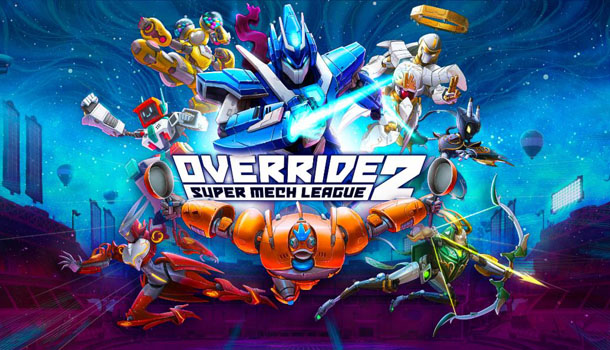 As a fan of the Mecha genre I’m pretty much a sucker for anything with the word Mech, or Mecha in the title. Developed by Modus Studios Brazil and Published by Modus Games, Override 2: Super Mech League is a robot brawler where you take to the ring with 20 playable bots and duke it out to become the mech league champion.

The original Override game called Override: Mech City Brawl had you facing off against an army of creatures called “Kaiju”; if you have ever seen Pacific Rim, that’s the ones. As the game progressed you would fight against infected mechs whom the Kaiju had taken over. Override 2: Super Mech League takes place after the mechs have won and they are no longer needed to fight the Kaiju. What else to do with a bunch of giant fighting robots other than of course to turn it into a form of entertainment, thus the Super Mech League was born. 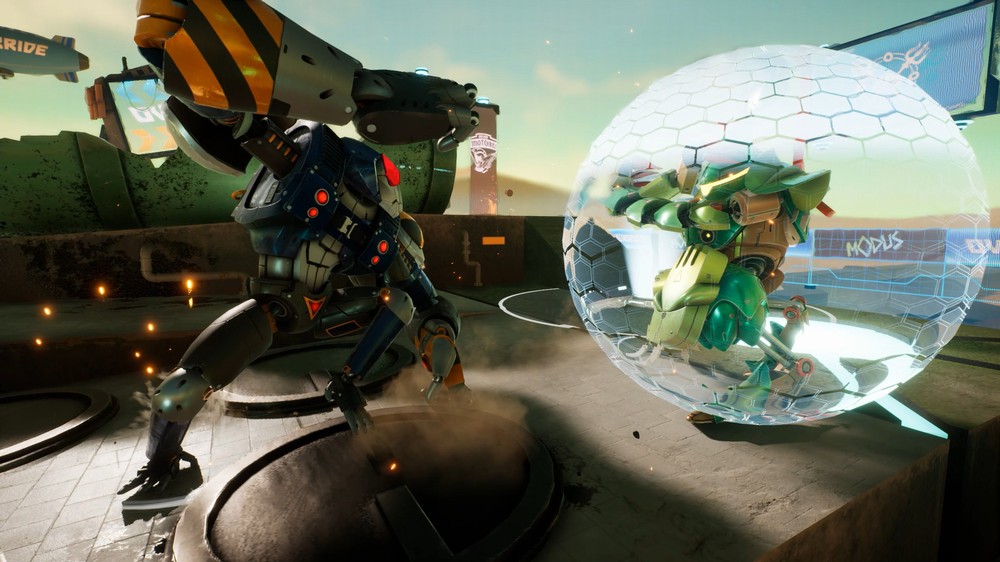 Straight off the bat, you will notice that your game modes are Quick play, Leagues, Versus and training. Arcade mode/story mode has been removed in favor of leagues. The last game I played that tried to show a story mode via PvP battles tanked hard; oddly enough both involved giant robots. That does not work if your game does not have enough people playing. Just today I played 10 matches and all 10 were up against A.I enemies. It is a horrible idea that developers need to stop repeating. If you cannot make a story, then do not try to cram one in via PvP battles where you must match up with other live players. Call your “league” the story mode, keep the bots and be done with it.

Regarding mech choices, there are plenty, about 20 plus DLC, which by the way, it’s freaking Ultraman from the Japanese sentai series.  If those words just confused you its not meant for you to buy. Something I was really surprised regarding the mechs is that while you have choices and each one has their own style of combat, such as Pescado, the giant mech with the fish head being more like a wrestler in his combat style when compared to someone like another mech called Watchbot who is well rounded in his straightforward mix of range attacks and standard fighting moves. What I really like about Override 2: Super Mech League, which is probably a surprise if you have read this far, is how the combat itself works. Four buttons to control the punches and kicks and each of those can be combined for projectile attacks or different super attacks with a bar that fills up when you gather energy and then use to unleash an ultimate attack ranging from a giant laser shot from the middle of your chest to a move that you can teleport to a location and then teleport back, mainly useful in 4v4 battles to give yourself a break if you are being ganged up on. Aside from all the zany moves going on you can also pick-up items during the battle such as shot guns, grenade launchers, swords, spears, and rocket launchers. It adds a nice mix to the standard melee combat. 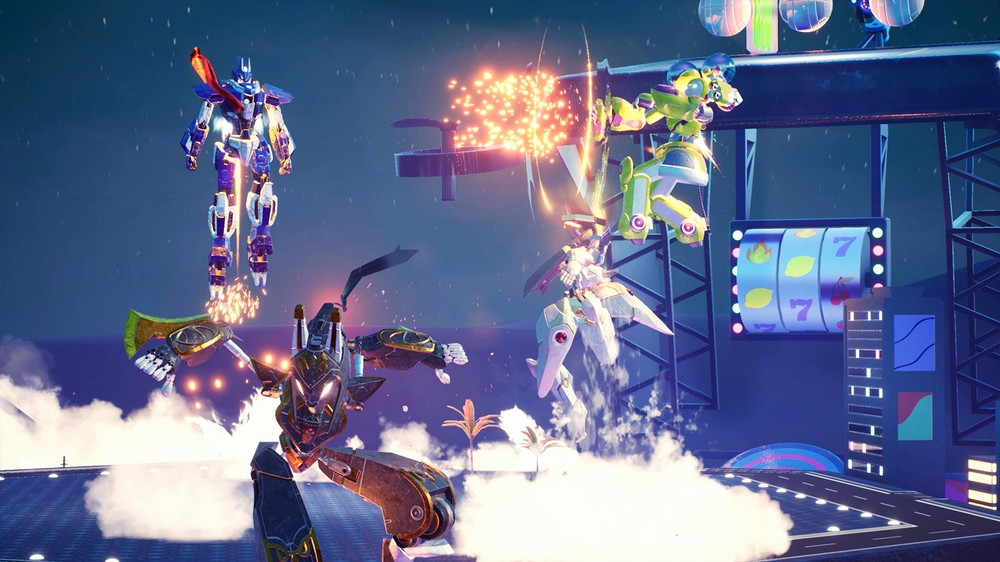 Speaking of combat, right now you can do 4v4 online battles using the league or versus modes. The versus mode has different selections such as 1v1, 2v2, 4v4 and Xenoswarm mode which seems to be like the original in that you fight versus Kaiju versus each other. It also allows you to change weapon drop rate and ultimate charge rate. In all these you can invite friends or just matchmake, but I pretty much only fought against A.I while playing.

There is one big issue I have with Override 2.  After a bit of research on the previous game, since I had never played it, and now comparing it to the newest incarnation, they not only decided to remove the story mode, but they also removed the pilots from being involved at all.  If I hadn’t looked up some old gameplay footage, I probably wouldn’t have cared so much about the pilot part of it as much as the story but now I’m just a giant robot and no longer a giant robot pilot.  For me, this takes away from the core of the whole game. I saw dialogue mid-fights, I saw cutscenes where the pilots were discussing the battle, their attitudes. Its kind of a bummer to see something so cool get replaced by a mech league “manager” and never see your pilot.

Override 2: Super Mech League is entertaining for a few matches, then you realize you are going to play against bots most of the time and it quickly losers its luster. I give them props for trying to create something from their previous incarnation, but all the decisions regarding the multiplayer side of it really hinder its attraction. 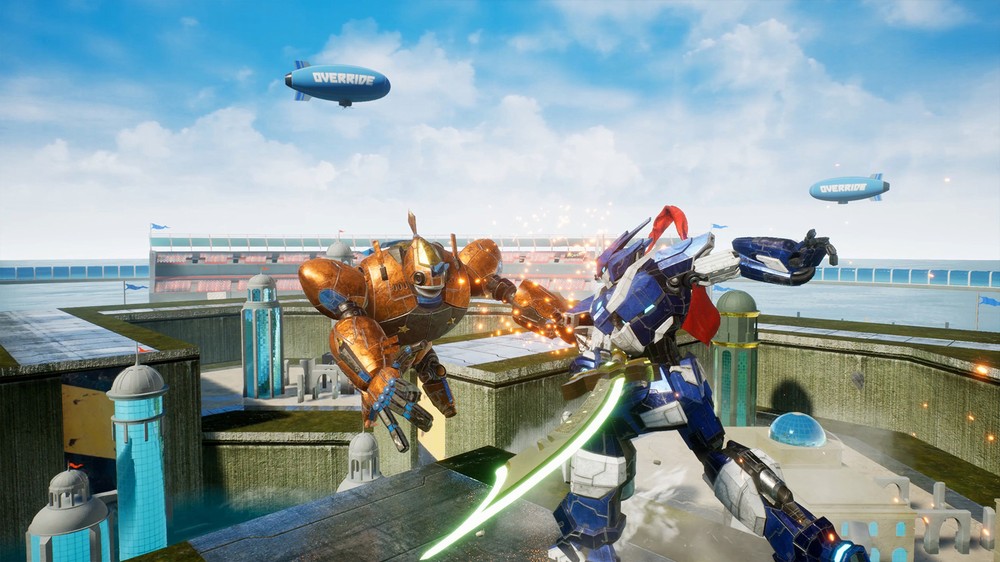 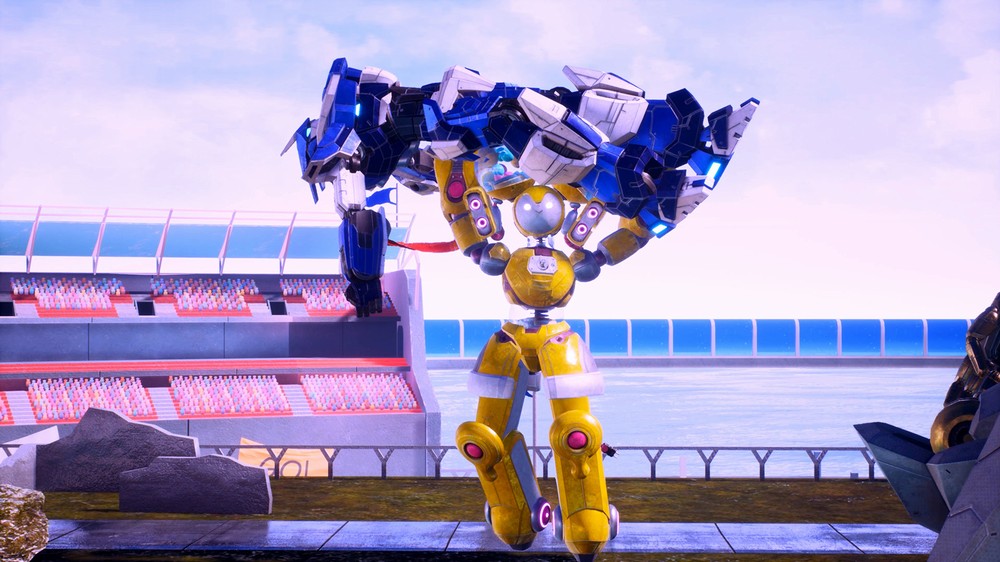