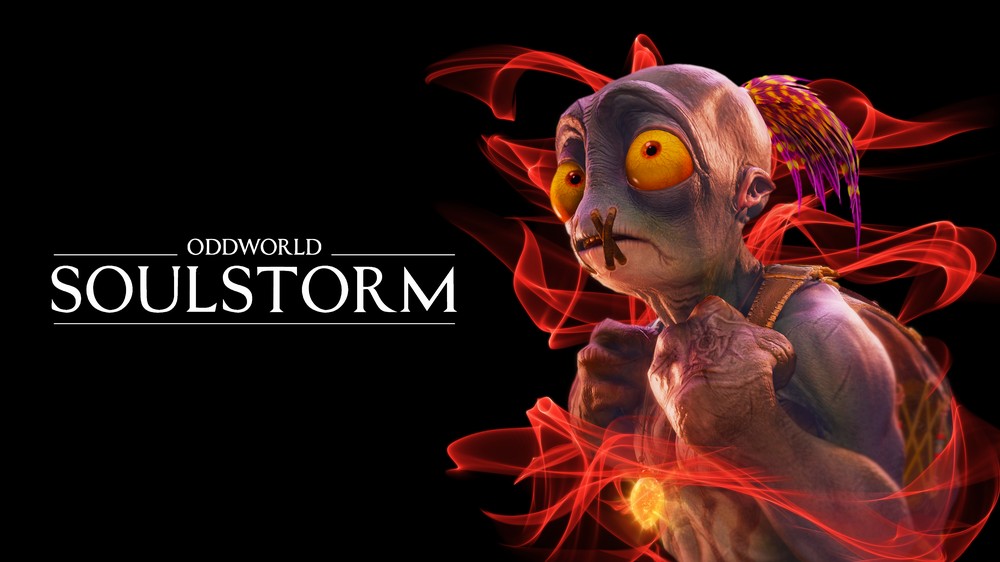 Oddworld: Soulstorm is a strange game.  You know going off the title I feel like I should’ve expected this. I’m new to the Oddworld series but thought I knew what I was getting into at least a little bit. I’ve seen the first hour or so of Abe’s Oddysee, the first game in the series. I know the core gameplay loop of avoid Sligs, rescue Mudokons, mind control Sligs to do helpful things and then explode them with your funky powers. Whimsical, almost Seussian, narration. Not to mention the dedicated fart button.

I was expecting a comical but dark adventure through space freeing enslaved Mudokons!  I was NOT expecting the game to start out with sligs attacking a safehouse and burning it down, the Mudokons fleeing in a panic, with our protagonist Abe finding one dying of a gunshot wound and being there with them in their final moments.  There was not even a single fart joke. 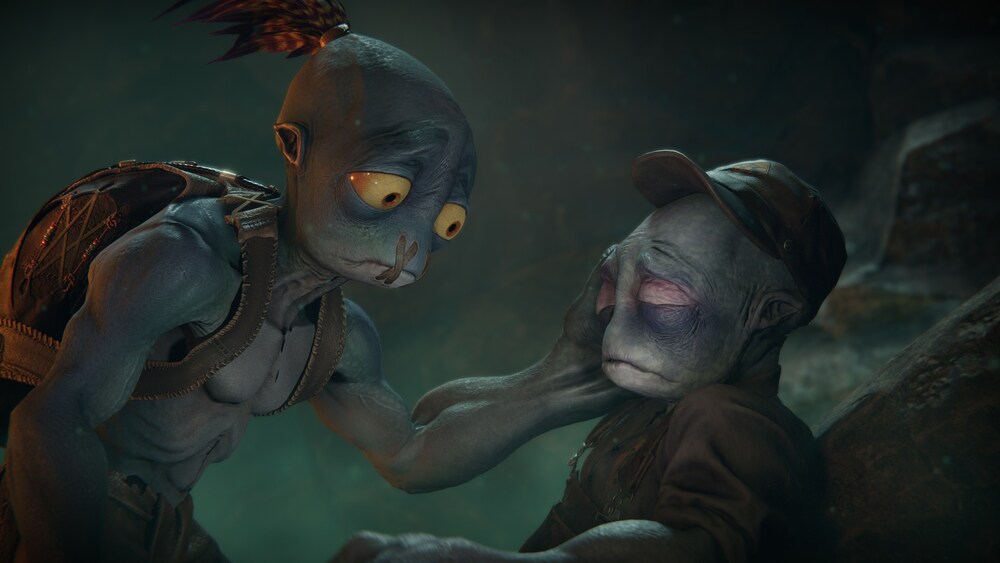 After an opening like that, I was also not expecting the game to be in the state that it’s in. It just… feels a bit weirdly unfinished. I’ll get to that more in a bit, but this game is just a hair’s breadth away from being unplayable without being too close to being unfun. The gameplay is solid. There’s decent story. There’s even good mechanics AND fun extra polish. But there’s also some… annoyances? Yeah, let’s call them that. Once again more on that in a bit. Let’s go back to the beginning.

First off, I will say Soulstorm is quite a long game. There’s I think… Nineteen? Levels, coming out to around thirtyish hours of play. I was only able to get through the first five before it became time to write this review, so I will state this review is less complete than I usually strive for and would like to apologize. 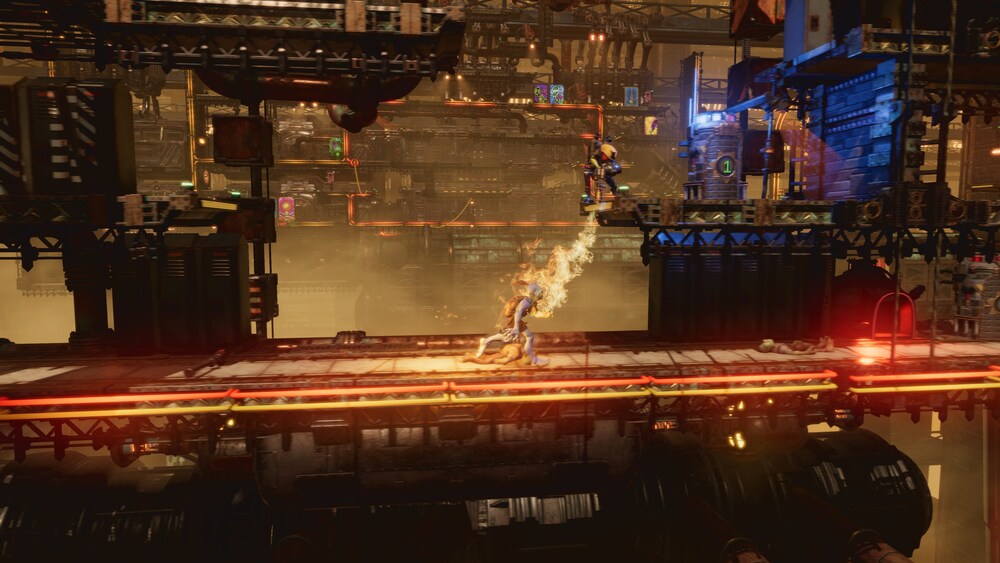 In Soulstorm, you play as Abe, a Mudokon, which is a little blue alien guy who lives on the Oddworld. Due to previous events (see: Oddworld New ‘n Tasty, the remake of Abe’s Oddysee), they are also recently escaped slaves, narrowly avoiding a fate of being slaughtered for use in various unhealthy snack food products. However, despite the celebrations the Mudokons are having, partying and guzzling this totally-not-plot-relevant stuff called Soulstorm Brew. Meanwhile Abe consults with a guy wearing a Bionicle mask who warns him that he must be the voice of his people and The Bad Times are impending once again. Shortly after he says this, the camp is attacked by these yellow guys with mouths like sausage grinders called Sligs. They fly through and try to slaughter everyone, the caches of Soulstorm brew are ignited in the chaos, and Bionicle Man is nonchalantly consumed by the flames.

From there the game begins. You go through a few tutorial levels that teach you the basic mechanics of running, jumping, sneaking, and throwing stuff. Soulstorm brew is, like all alcohol, extremely flammable. This can be both helpful and extremely dangerous, for you or your enemies. Unlike all alcohol, water can safely and easily extinguish burning Brew (Note: This does not work in real life. Use a fire extinguisher or get out of there). 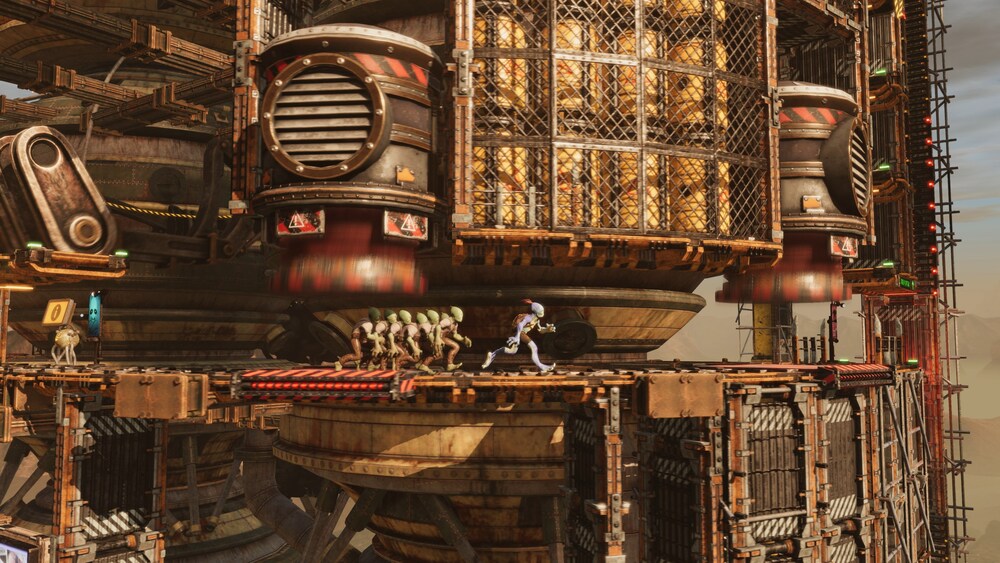 The game is also quick to introduce the game’s stealth mechanics, and the way Abe can cheese them by using his ability to Chant. Doing so summons a glowing orb which he can steer around for a time. If he drives this orb into a Slig, he can then control them. Sligs are armed. Abe is not. You can imagine how this is a very important ability.

If you’re feeling more altruistic, most of the time there will be ways to incapacitate Sligs instead of killing them outright. If you tap the chant button while controlling a Slig, they will be knocked out briefly. Additionally, most Sligs carry two weapons, occasionally including a stun pistol. Sometimes you can even rifle through stunned Sligs’ pockets for tape, which can be used for nonlethal Apprehension, tying them up and removing them from the game. Despite the presence of a “Quarma” meter, it’s important to note that killing Sligs does nothing negative to it. You are free to spare or kill as you please. 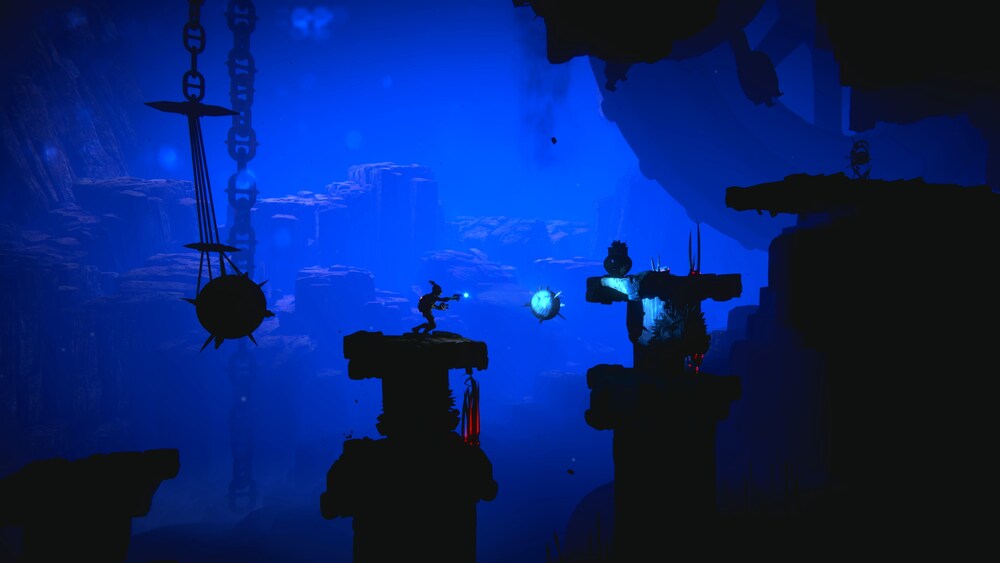 There’s also a crafting system in place. As you go through levels, you can find ingredients which can be used to make helpful tools, for example stun mines. These work like the stun pistol, except… well. It’s a landmine. They will blow apart smaller creatures like wild dog-like Sleeches, but stun Sligs, rendering them vulnerable to pickpocketing or tying up.

This game is in 2.5d, which means while you are restricted to moving left, right, up and down, things in the foregrounds and/or backgrounds are important. In early levels you’ll learn to watch out for snipers and mortar fire from the background, and the second level even has a setpiece where you have to protect legions of Mudokons from Sligs as they climb a ladder to safety in the background.

Of course, the game does still have the parts where Abe has to locate and rescue Mudokons in the levels as well. While they are fragile, you can mercifully tell them to wait somewhere safe while you solve puzzles or eliminate threats in the way or what have you. There have definitely been worse escort missions in games, and it feels good to lead a legion of guys to a portal out of there. 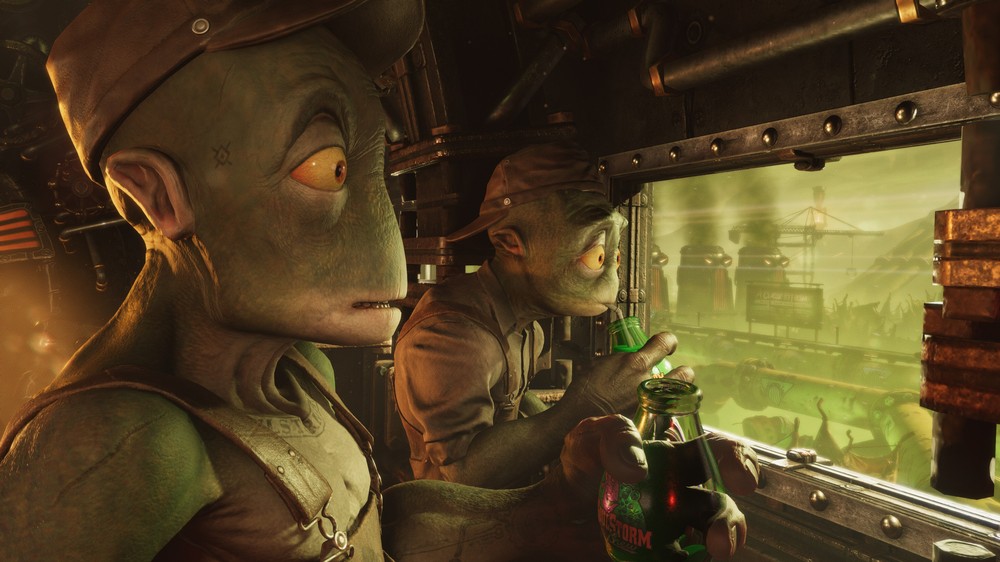 Sometimes there will be a device that you need a certain number of Mudokons to interface with, but from what I’ve seen there haven’t been any situations where you can screw yourself by, say, rescuing Mudokons before you’re “supposed to”. Any Mudokons you find in an area will only follow you while you’re in the area and wait for you to return should you leave. Anything they need to interact with will be in the same area.

Okay, let’s get down to the weird funky stuff. First off: For a stealth platformer in 2.5d, there’s a good number of situations where it’s hard to tell what in the foreground is a wall or just like. An arch. This is important because if you’re standing behind something like this and find out a Slig can see you through what you thought was a regular wall, well. They will shoot you.

Fun fact about Abe! He appears to consist largely of birds, if the fact that one flies out of him when he is shot is of any indication. Birds are not sturdy creatures! It takes very few bullets to kill an Abe. You have little room for error in stealth sections.  The good news is that this game uses checkpoints liberally. Dying just means respawning a short distance away and needing to redo a little bit. It’s usually not too bad, if not for the fact that if you want to save after activating a checkpoint, you need to go back and find a different checkpoint to save at because active checkpoints won’t work for that, despite showing a button prompt when you walk up to them. 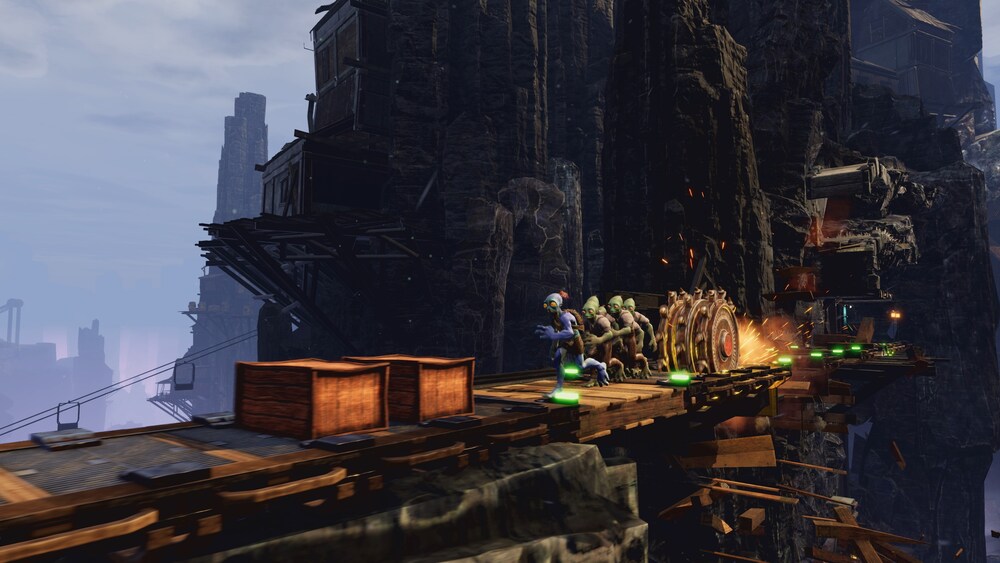 Another similar thing: I mentioned mortar strikes from the background earlier? They do the crosshair thing where a big X appears on screen, and you should not stand there, or you will explode. However, sometimes the shells can hit bits of the background instead, which makes them weirdly unpredictable.  Speaking of enemies, it can be hard to see some of them. Not the Sligs; they’re bright yellow and have distinctive voices. But Sleeches tend to be in dark caves, hard to see if not for the big cartoony Zs they make when they sleep, which is frequently, and generally all you need to be able to manage them with a bit of effort. And don’t get me started on the bats.

They’re tiny. They’re fast. You’re meant to target them with the right stick and throw rocks at them to knock them out, but they seem to have problems with level collision, and are extremely hard to see even in broad daylight. I swear I’ve seen them phase through walls. This would be a nightmare if not for the fact that they tend to only occasionally attack you, seem to be unable to cause serious (if any) harm to your fellow Mudokons, and can only attack you for about 15% of your life bar. You slowly regenerate health, and there’s these pickups called Royal Jelly that are full heals and increase your health to 133% temporarily so they’re more of an annoyance than anything else. 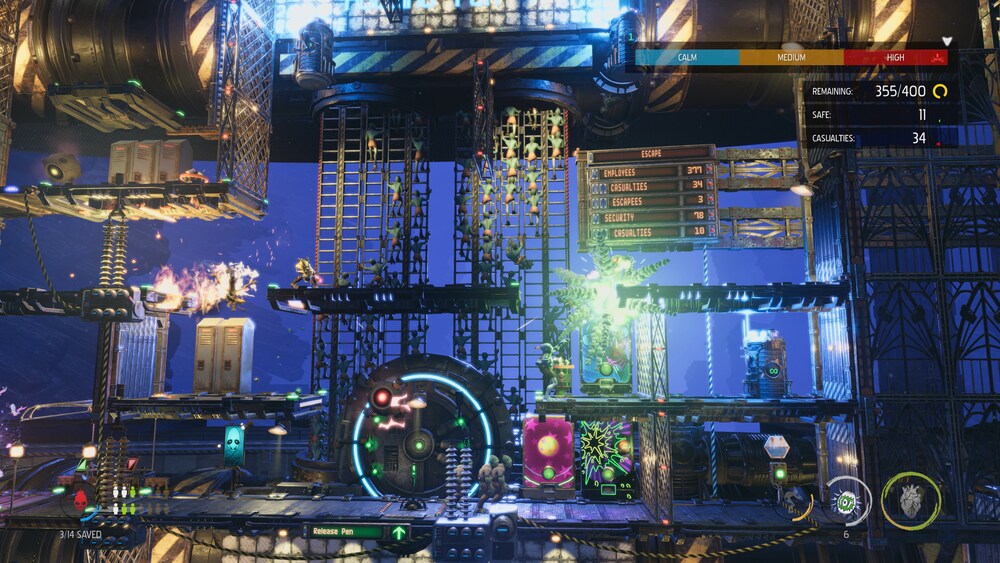 So… yeah. Like I said this game has a weird lack of polish to it. I’ve had objectives not complete. I’ve fallen through the floor on moving platforms. Sometimes text overlaps other text on the pause screen. There’s even a midlevel cutscene where you talk to a sick Mudokon and, despite there being no movement of note from either you or them, the camera angle changes like 4 times (which especially perplexes me. Every main cutscene in the game? Looks immaculate. You can see individual capillaries in characters’ eyes. It’s gorgeous).

And yet, despite all this general jankiness, it’s not a bad game. The jankiness doesn’t help, but the checkpoints scattered throughout, and the liberal use of healing items makes it something I definitely plan on finishing. Am I going to 100% things? Probably not- Getting the best ending only requires that you rescue 80% of Mudokons in each level. There are badges you get for doing extra things in each level, like crafting x times or finding x number of royal jelly, but all that’s good for is a high score board and personal pride.

So, if you can put up with some weirdness, this game is more than decently enjoyable. I don’t know how it stands up to other Oddworld games, but hey. It manages to stand on its own, even if it’s somewhat wobbly and needs to take a breather sometimes.

Author: Zachary Miller
Zachary is an aspiring writer and game designer, currently working on his first novel which is tentatively titled I Played a Cursed VHS But Paused it Before the Ghost Could Fully Emerge and Now I Have an Angry Witch as a Roomate (VHS Witch for short). The first few chapters can be found on Itch.io.
Website