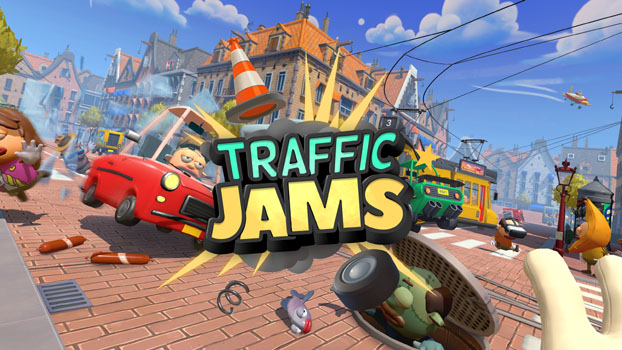 Designed for VR, Traffic Jams uses easy to understand and intuitive gestures allowing players to control traffic the way they see fit while managing all sorts of crazy distractions. “The first feature we added was an angry wasp,” Yannis Bolman, CEO at Little Chicken Game Company, says in the video. “It was easy to recognize and understand, and flailing your arms around on a busy intersection seemed like a fun way to confuse the drivers waiting for your signal. From that point on, we just kept adding more and more funny and absurd ideas!”

In the video, we see several of these distractions, from zombie pedestrians to buildings spontaneously catching fire, and a variety of environments set in some of the most iconic cities around the globe. “In the final game there will be 5 different locations that each have its own set of challenges,” Yannis Bolman explains, and he goes on to reveal a new destination for the game, “We’re taking you to our home town: Amsterdam where we’ll introduce a whole new challenge: a tram that stops for nothing!”

In the world of Traffic Jams, all traffic lights have gone out and you are the only one who can keep traffic flowing. Sound easy? Think again! Traffic Jams is more than just a traffic control simulator, as each new city throws its own twists and turns at you, from monsters and (un)natural disasters to up to 4 non-VR friends in (couch) party mode!

Published by Vertigo Games and developed by Little Chicken, Traffic Jams is releasing on Oculus Quest, PlayStation VR and major PC VR headsets in Q1 2021. For more news about Traffic Jams, find us on Facebook, Twitter and Instagram and subscribe to the newsletter at trafficjams-vr.com.