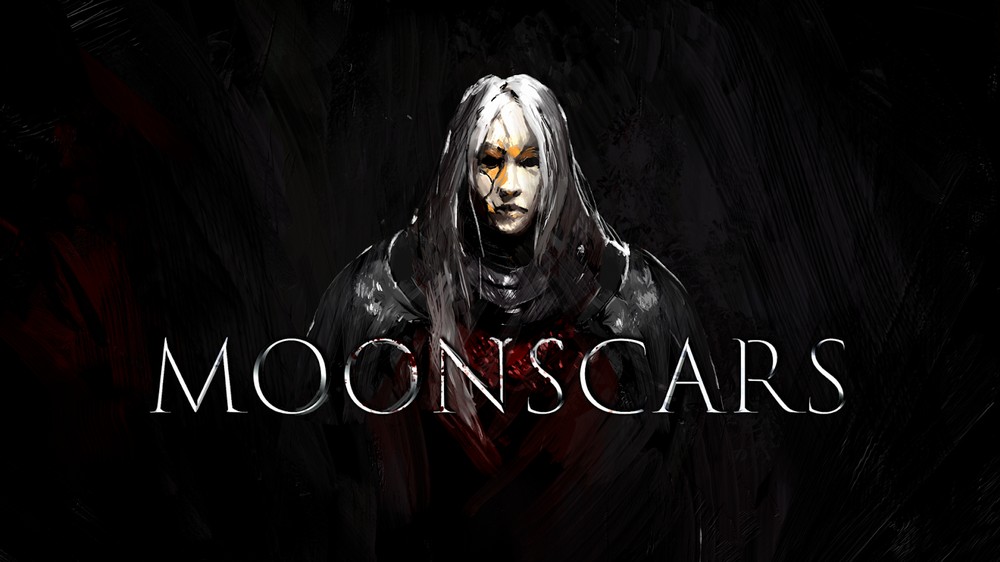 You wouldn’t think the world would need more doom and gloom in it, but then another Souls-like comes out and completely proves that notion wrong. Black Mermaid’s first game, Moonscars, is a 2D platform-adventure dripping in blood and watercolor. Much like the games that inspired it, Moonscars is a challenging brain exercise in planning your attacks and timing your defense. The mainstays of the Metroidvanias/Souls-likes genres are all present, but that doesn’t keep Black Mermaid from trying new things and making your time in their dark game more challenging and fun.

Players take on the role of Grey Irma, a vicious warrior who has returned from the dead as a clay imitation of her former self. What has happened to the world and why you have returned are mysteries that unfold as you make your way through the land. Going in, I wasn’t expecting much story wise. The bread and butter of this genre is delivering story elements through item lore and letting players piece together the story on their own (or if you’re me, piecing it all together after watching hours of YouTube lore videos.) Adding to the mystery aspect is an omnipresent cat that speaks in riddles whenever you cross paths. If you’re not paying attention, a lot of it can come off as gibberish, not that you need the poetics to get the main story beats. I won’t dive deep into spoilers, but Grey Irma’s adventure brings her face-to-face with former comrades from the battlefield, all seeking purpose as they come to grips with their untimely deaths. It plays on some dark themes that may evoke some emotions. 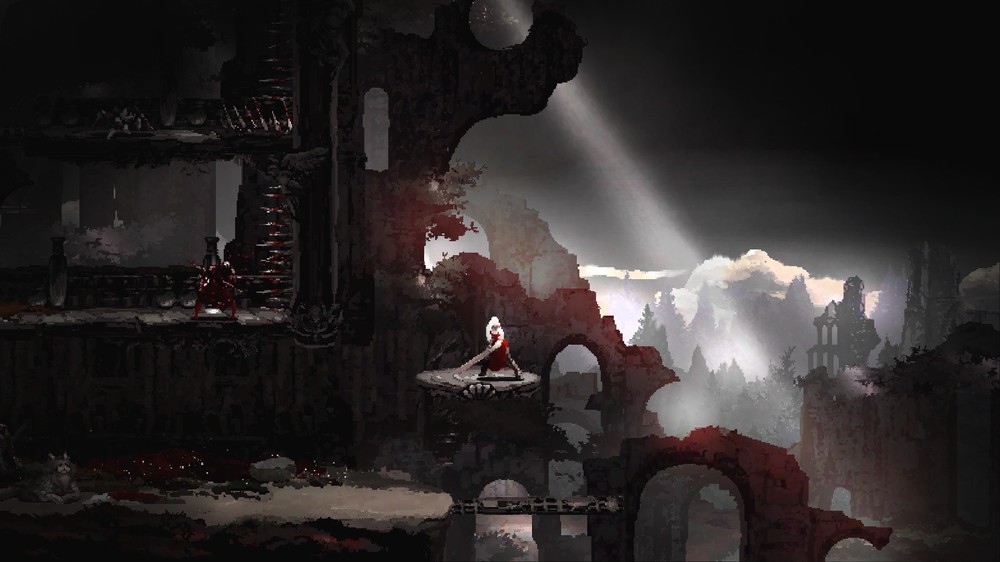 Between all the killing, Moonscars had me stopping to take in the hopeless beauty around every corner. This is a dark game. The world feels helpless and lonely, with small details, like Grey Irma’s cold breath in the air, adding to the overall dread of the atmosphere. The backgrounds hint at a once lively world, now engulfed in death. The game knows its tone and steers into it, hard.  An early boss fight takes place in a small sanctuary, filled with statues and candles to honor the dead. In the foreground, a bright pool of water illuminated the candles, myself, and the epic battle I found myself in. I was initially worried the game would be filled with the grayish-brown landscapes throughout my entire trek. Those worries were put to rest thanks to the aforementioned sanctuary and later sections of the castle.

Getting around in Moonscars feels great. There’s no loss of abilities on the front end that you come to expect from the genre. You are fully mobile right out of the gate with a dash and wall climb that can get you to just about any platform you find along the way. There are still obstacles that require specific upgrades to get through, but I never felt like my exploration was hindered when stumbling upon a closed gate or a flesh wall. The level design across the multiple areas evokes early Castlevania with wide opened outdoor spaces and a castle that ascends into the heavens and descends into the pits of hell. Dissolving platforms, spike traps, and hidden rooms add variety and challenge to an already deadly situation. 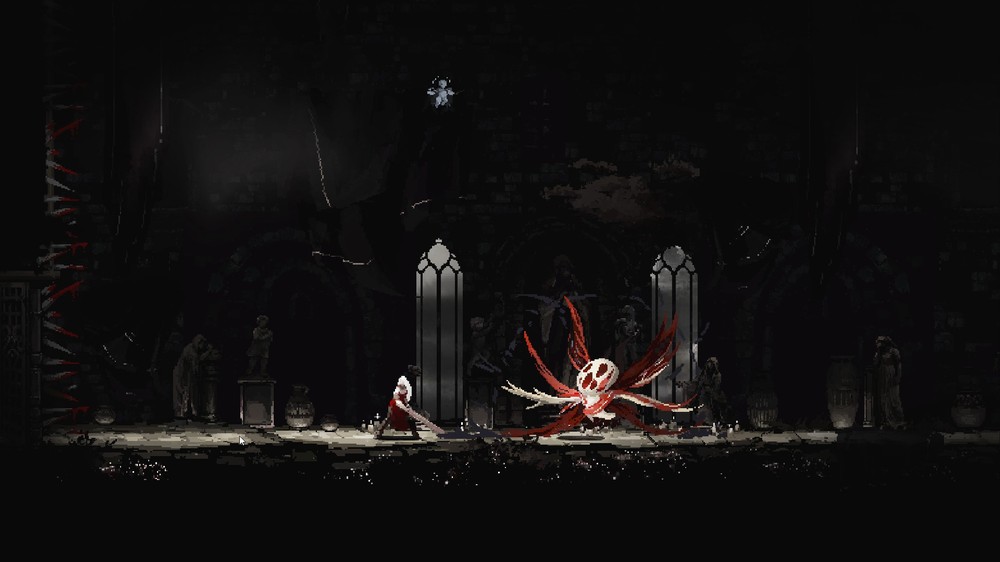 Moonscar’s combat is easy to learn and fun to master. Grey Irma’s main weapon throughout the game is her sword, but the variety of options around it keep the swordplay from going stale. Players are presented with a revolving door of special attacks. These attacks range from a spear that increases your range, to a warhammer that deals out heavy damage and stuns enemies. These attacks are animated beautifully and have a weightiness to them. For example, Grey Irma drags the warhammer across the ground before raising it up to smash into an enemy’s head, resulting in a bloody mess. Each time you select one of these weapons, you are granted a bonus to either health or Icor, which you keep until your next death. Icor is Moonscar’s magic equivalent, which is used to either heal or perform witchery. There’s a skill tree full of witchery abilities, all of which can be unlocked by collecting bone dust, Moonscar’s version of souls. Players can also buff Grey Irma by equipping pendants they purchased or found while exploring. Later pendants and witchery do feel like they tip the favor in the players scale, taking away some of the challenge.

Enemy variety leaves nothing to the imagination in Moonscars. Think of a Castlevania or Dark Souls creature and there is probably an equivalent here. The variety also ramps up quickly, with tougher enemies entering the stage almost immediately. Once you’ve got the dodge and the parry mechanics down, and get a feel for the enemies, the game throws more and more of them at you with each encounter. Even as the body count gets bigger and the amount of hits to kill you gets smaller, the game never feels unfair, no matter how much you swear it is cheating. If you do find yourself struggling, the game opts to not throw you a bone. After a few deaths, some enemies fall under the affliction of Moonhunger, making them glow red and overall tougher to beat. This is a nice addition, but I could see how it would annoy some players who are already struggling. Moonhunger can be deactivated though, from the workshop, for a sacrificial cost of some of the game’s currency. 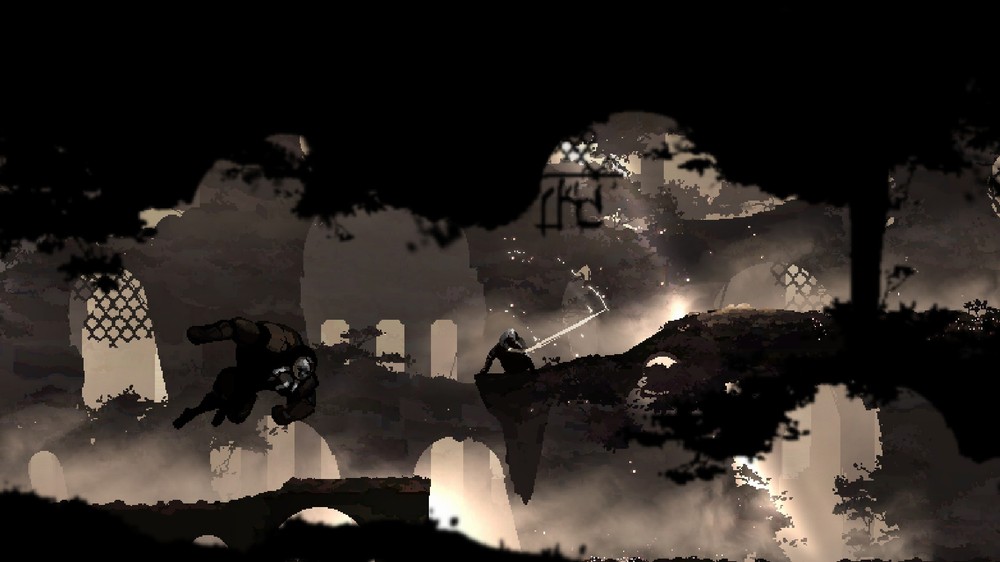 Dark Mirrors are Moonscar’s bonfires. They serve as a checkpoint and give you access to the Workshop hub area, but they come with a twist. Activating a mirror requires you to leave your clay body for a new one. Upon returning from the Workshop, you’re required to fight your old body, before advancing. To make things interesting, the doppelganger has stripped you of your special attack and also has the ability to heal. This was a fun surprise the first time, but quickly wore thin with each newly activated mirror. Discovering a new mirror resulted in a breath of relief followed by a moment of realization that I had a new fight waiting for me on the other side of my rest. Even with the doppelganger having a different special attack each time, each encounter feels too similar to the last.

“But how are the boss fights,” you ask. They can be frustrating. They’re tough but not unbearable. Looking for patterns and the enemy’s tells will be your key to success. I found myself struggling with the first boss until I threw all caution to the wind and finally embraced the parry. Each boss will have you cursing up a storm until you finally empty their health bar and throw your fist into the air in victory. Bosses range from grotesque to just downright sad. There’s enough variety here that you won’t feel like you’re repeating any fights (unlike the aforementioned mirror fights.)

Moonscars is a familiar trip into a well-traveled genre. That doesn’t keep it from feeling dark and foreboding in theme, art style, and gameplay. It doesn’t go out of its way to try and reinvent the wheel, but anyone familiar with Souls-likes will appreciate the new things that it’s trying. Its difficulty might keep some from enjoying it, but those who are a glutton for the trial-and-error gameplay of the genre will feel right at home entering the kingdom of despair and clay. 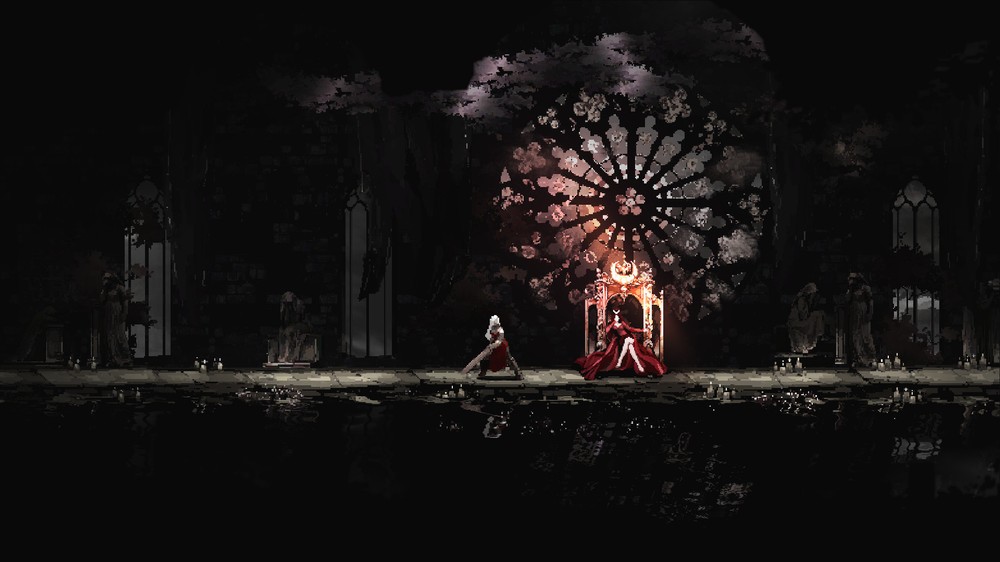 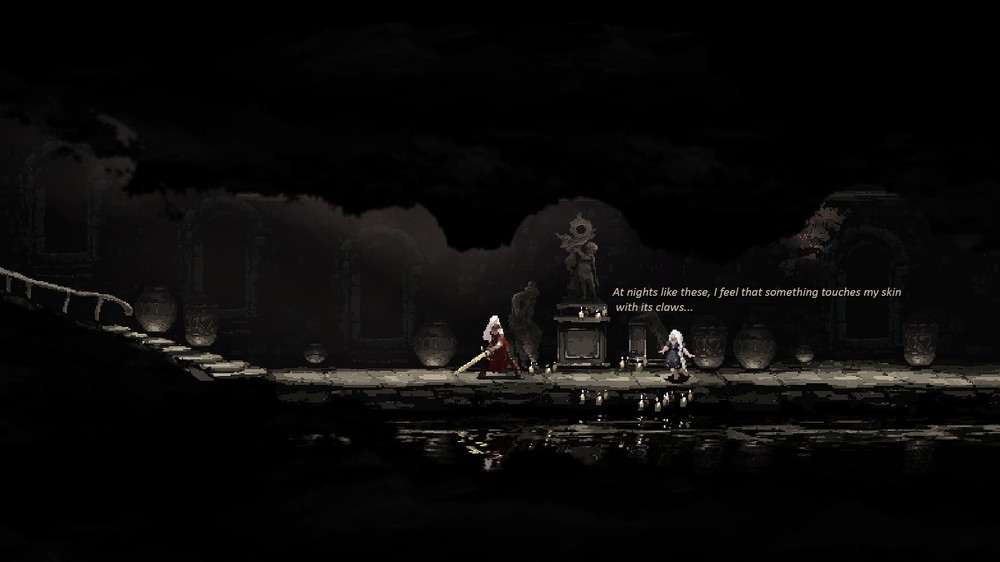 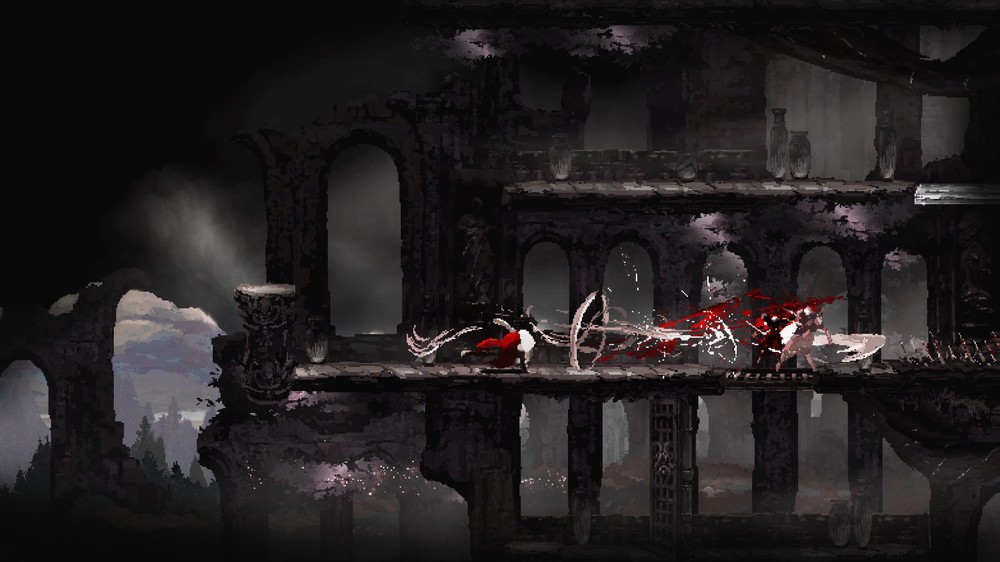 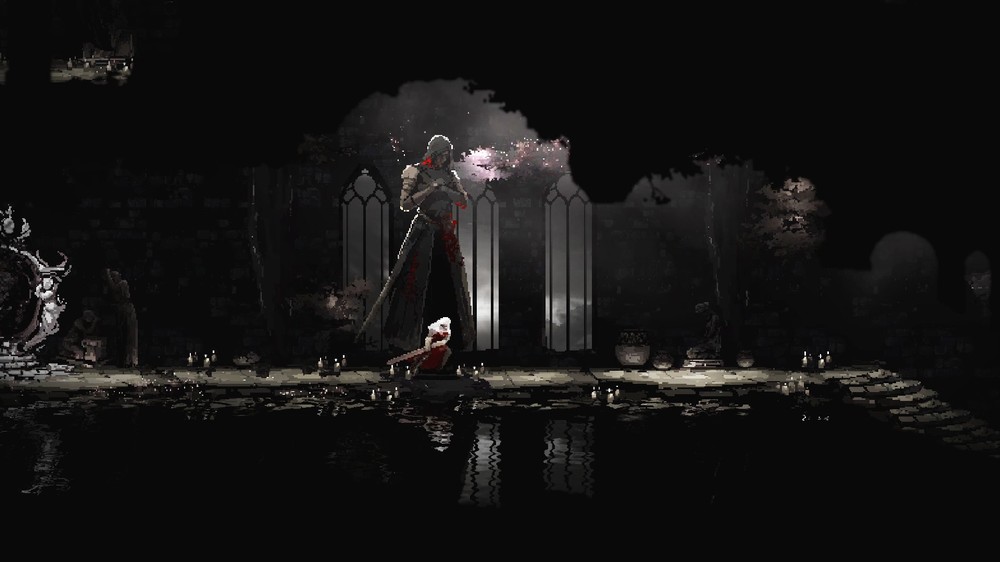