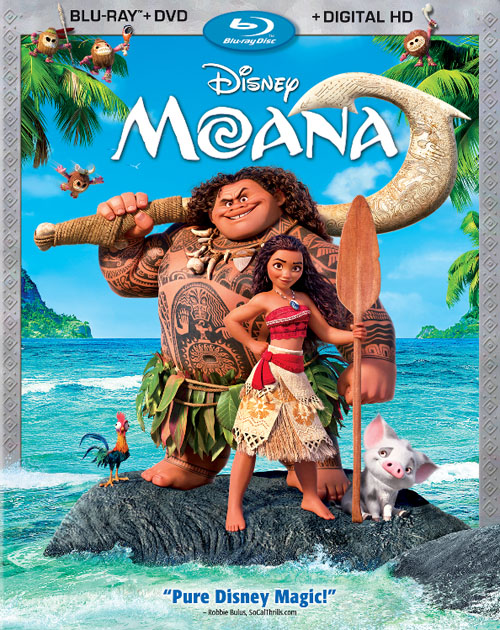 A five year journey that began in Fiji in 2011 and ended in New Zealand in 2016 might sound like the ultimate vacation to some, but Directors John Musker and Ron Clements somehow managed to turn all that island-hopping into what has quickly become my all-time favorite animated Disney movie. Moana is the culmination of years of research into island culture, fashion, music, lifestyle, and lore. The film inserts its narrative into real-world legend, set 2000 years ago during a time when all South Pacific exploration had come to a complete halt. Moana gives us one possible reason for this as well as its triumphant resolution.

With the exception of Dwayne Johnson lending his larger-than-life personality to larger-than-life demigod, Maui, and Alan Tudyk clucking his way into our hearts as the brainless rooster, Hei Hei, this is one Disney movie that isn’t relying on star power. If anything, Moana will certainly be launching the multi-talented Auli’i Cravalho (Moana) into the spotlight. For the rest of the cast, Disney tried to keep it culturally authentic by casting only those with island heritage.

The movie tells the story of Moana; from toddler to her teenage princess years, and yes, she is a princess because she wears a dress and has an animal sidekick. At a very young age the ocean witnesses Moana help a baby turtle safely reach the surf; an act that destines her to become the chosen one who will someday return the heart of Te Fiti and restore the lands, but not before a few rousing musical numbers about island life and the multiple uses of the coconut. When the singing and dancing is over we find Moana has grown into an independent teenage girl, who of course has a calling to the ocean despite her father’s almost irrational fears of exploring beyond the reef.

Moana shares a special relationship with her grandmother who fills her in on the rich cultural history of her people, who were once voyagers who explored and settled new lands, but all that had to stop when a mischievous demigod, Maui stole the heart of Te Fiti and cursed the land and sea, not to mention summoning a giant lava demon.   When that curse finally reaches her island and starts to destroy the crops, Moana decides to sail away in search of Maui so he can return the heart and restore the land.

I have to say, this is actually one of the more impressive stories I’ve seen in a Disney animated feature; one that will appeal to pretty much the entire family. The visual mastery at work here is unprecedented with some scenes bordering on photo-realistic, and the special features will tell you all about the new hair and water tech software working hard behind the scenes to bring this film to life. While I am not a big musical fan I have to confess to loving every single song in this movie; some more than others, especially anything being sung by Auli’i Cravalho. Even The Rock can sing…who knew? But what really sealed the deal were the outstanding voice actors who were perfectly chosen for each role and work exceptionally well together. The chemistry is undeniable.

While I impatiently wait for Disney to join the golden age of 4K/HDR its movies like Moana that make me wonder if 4K could possibly look any better than this. Admittedly, I was playing in Sony’s new X800 4K player which does an impressive amount of 4K upscaling, but even under still-frame analysis there wasn’t a single flaw in this magnificent 1080p transfer. Color richness is unmatched, black levels were flawless, the details in the face, skin, tattoos, clothing, and any other textures are insane, so much in fact they during the closing credits the do extreme close-ups of random items from the film just to show off. I honestly have native 4K/HDR movies that don’t look this good.

Stylistically, it’s worth noting that the directors come from 2D animation roots including Aladdin, so there is an interesting blend of traditional 2D hand drawn art married with CG in their first venture into computer animation. And if you think there is something familiar about Maui’s animated tattoo you’re right. It was animated by the same guy who did the genie in Aladdin.

Moana surrounds you with the sounds of island life and later the isolation of the open ocean with a remarkable DTS-HD MA 7.1 mx that offers a dynamic mix of LFE that had my subwoofer trembling during thunderstorms and the epic lava boss fight. The rest of the mix effortlessly surrounds you in environmental effects while perfectly prioritizing dialogue to the front and center, so you can hear every word of dialogue and song lyric.

Moana comes loaded with an impressive offering of bonus material kicking off with a director’s Audio Commentary where John Musker and Ron Clements go into great detail on every aspect of making this film. It’s fun and educational. There are two short films; Inner Workings which was shown in theaters, and Gone Fishing, a mini-movie created with assets from Moana where Maui goes fishing.

Voice of the Islands is a 31 minute feature worthy of being its own documentary that goes into tremendous detail on the research that went into this movie and the part that real islanders had in making it so authentic. Things You Didn’t Know About is a fun, yet disposable bonus that asks various cast and crew assorted questions about breakfast, sleeping, and other random topics. Island Fashion is a 5 minute discussion with Neysa Bové that will give you new respect for the level of research and detail that went into dressing the characters in the movie.

The Elements Of… is a great four-part feature for techies who want to know how they created all those awesome effects like animated tattoos, realistic water, flowing hair, and a certain lava monster. Join Auli’i Cravalho in Fishing for Easter Eggs as she points out all sorts of hidden secrets the animators buried in the backgrounds. There are nearly 26 minutes of Deleted Scenes, all shown in some sort of pre-production design stage and introduced by the directors.

And finally we come to the music. They Know the Way: Making the Music of Moana offers some great insight into the music of the film and the steps taken to keep it culturally relevant.   Next is a Deleted Song: “Warrior Face” with Introduction by Songwriter Lin-Manuel Miranda that plays with deleted scene footage. And finally, we come to the big song, “How Far I’ll Go” Performed by Alessia Cara in her own music video, and then my personal favorite of the musical extras, “How Far I’ll Go” Around the World where the song plays continuously as the lyrics seamlessly adapt to more than a dozen languages.   This package also included a DVD and a digital copy that looks amazing on my iPad.  There is also a 3D version of the film available in the Ultimate Collector’s Edition.

There is nothing quite like a Disney animated feature and Moana continues to build on that legacy of excellence with what has easily become my all-time favorite animated feature. The core story combined with the amount of research that went into making this culturally significant and authentic plus the perfect ensemble cast, the breakout performance of Auli’i Cravalho, and the level of technically precision, not only in the artistry of the film, but in bringing it home on this stunning Blu-ray release is pure perfection and a must-own movie.