Midway’s Blast from the Past 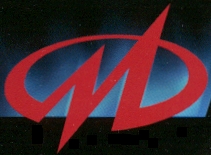 Although still relatively in its infancy, the game industry has amassed an impressive catalog of video games. One company that has contributed heavily is former arcade giant Midway, responsible for arcade hits such as Mortal Kombat and NBA Jam. No longer in the business of making arcade games, Midway has transitioned successfully to the home market, releasing original properties that have drawn praise from gamers and critics alike. Now, the company is unsealing its arcade vault and letting loose gaming nostalgia. Join us for a quick trip down memory lane as we preview four upcoming console titles from Midway that give new life to old arcade games.

The original Area 51, released in 1995, was one of the more popular light-gun games of the ’90s, so it’s not too surprising an update of the game is coming to the PS2 and Xbox later this year. What is somewhat surprising is the fact that the updated version, from developer Inevitable Entertainment, takes the form of a first-person shooter. As expected, though, the new Area 51 features the latest in 3D graphics technology – unlike the original, which featured blotchy sprites and full-motion video. Plus, Stan Winston Productions is handling some of the creature designs, while Chris Vrenna (of Nine Inch Nails fame) is supplying the music. 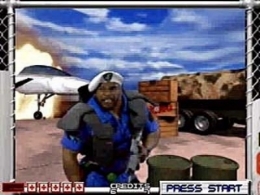 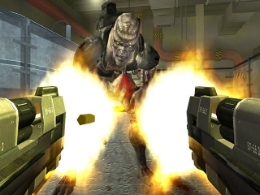 Another thing that distinguishes the new game from the old one is the inclusion of a plot, albeit a rather familiar one (of the “humans versus aliens” variety). There is an interesting twist, however: Your character – a HAZMAT (hazardous materials) operative and squad leader sent to investigate strange goings-on at Area 51 – becomes infected with a biological mutagen that allows him to mutate into a ghastly creature, à la Midway’s horror-themed title, The Suffering. Apart from that, Area 51 follows most of the conventions of a typical, current first-person shooter. Namely, there are multiple weapons, destructible environments, advanced physics, scripted events, AI teammates, and online play (planned to support 16 players). 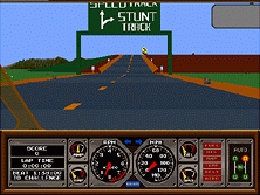 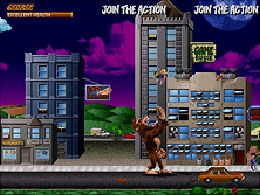 This fall, Midway will unleash a hefty load of arcade favorites – 21, to be exact – via a new Arcade Treasures compilation disc for the current consoles, courtesy of Backbone Entertainment. Among the games that will be featured are Mortal Kombat 1-3, Pit-Fighter, Primal Rage, Rampage: World Tour, NARC, Total Carnage, STUN Runner, Hard Drivin’, and Arch Rivals. Interestingly, while many of the games will be emulated, some (like Hard Drivin’ and STUN Runner) will be ported in order to avoid potential performance issues. Accompanying the games will be supplemental material, such as videos and interviews. In addition, the Xbox version will contain Live support, letting players keep track of high scores. The best part? All this gaming goodness will cost a measly $20!

Our pick for best fighting game of E3 2004, Mortal Kombat: Deception is set to recapture the magic of early Mortal Kombat arcade games and looks to be the darkest and most graphically impressive MK yet. Mortal Kombat: Deadly Alliance was a good game, but it didn’t meet all the expectations of diehard MK fans. Most notably, Deadly Alliance‘s character roster was missing a few fan favorites. Deception includes old characters, such as Nightwolf and Baraka, who were absent from Deadly Alliance. Additionally, Deception gives the fighters new moves, along with extra fatalities. 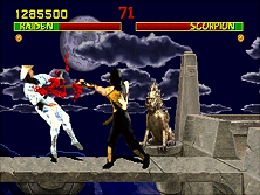 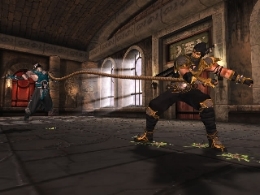 Each stage will play host to a uniquely gruesome fatality, as well. For example, one environment features a deadly meat grinder that rips fighters to bits, while another contains a massive stamp that flattens characters into bloody pancakes. Beyond the improved fighting engine, the game will contain a revamped Konquest mode and full-fledged sub-games (they’re too big to be called “mini-games”), including the Super Puzzle Fighter-esque Puzzle Kombat and an action-packed take on chess. Best of all, both of these will be playable online, as will the main game.

“Winners don’t use drugs,” read an intro screen for NARC, the violent 1988 arcade game that let players wage a deadly war against druggies. In the new and improved NARC, a mission-based third-person action game in the vein of recent Grand Theft Auto titles, that message is long gone. To win in the new NARC, which is currently in development at VIS Entertainment (maker of State of Emergency), you will very much need to use drugs…virtually, of course.

Switching between two playable characters belonging to the NARC squad – crooked captain Marcus Hill and undercover agent Jack Forzenski – you take to the grimy streets in an attempt to bring down the K.R.A.K. drug cartel, the manufacturer of a new addictive drug called “liquid soul.” In a surprising twist, however, your character can use the drugs he confiscates from criminals to gain special short-term abilities. For instance, smoking weed triggers a bullet-time-like effect, enabling your character to become more in tune with his surroundings. Meanwhile, smoking crack lets him deal out extra damage. 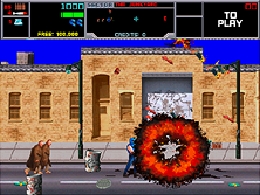 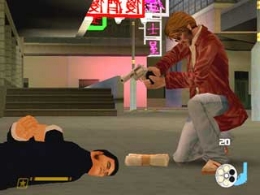 But your main goal in NARC is to curb drug use, not encourage it. Naturally, there are consequences to getting high in the game, as using drugs will affect your character’s health, reputation, and mental state (he can become addicted). Nevertheless, it will be interesting to see how the ESRB reacts to the updated, controversial NARC as the release date draws closer. Hollywood, on the other hand, has apparently already embraced the game: Reservoir Dogs star Michael Madsen and Hellboy himself, Ron Perlman, will voice the lead characters. Topping things off is a modified State of Emergency graphics engine that allows for plenty of chaos to ensue.