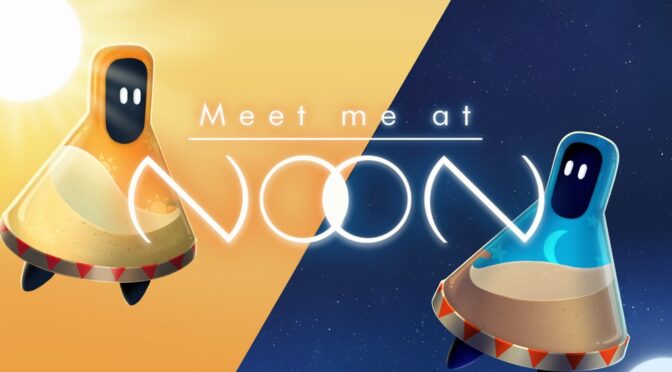 Sometimes all you need is a quick puzzle to fill in a few minutes, be it a crossword, sudoku, today’s Wordle, or Meet me at NooN. Pandaroo Interactive’s first puzzle game has all the trappings of brainy puzzle games that can make it a quick distraction or a total time suck, depending on how you want to approach it. Taking out some annoying mechanics of modern puzzle video games, Meet me at NooN makes a really strong case for itself with its simple but challenging gameplay loop, its low stakes puzzles, and its chill ambience. 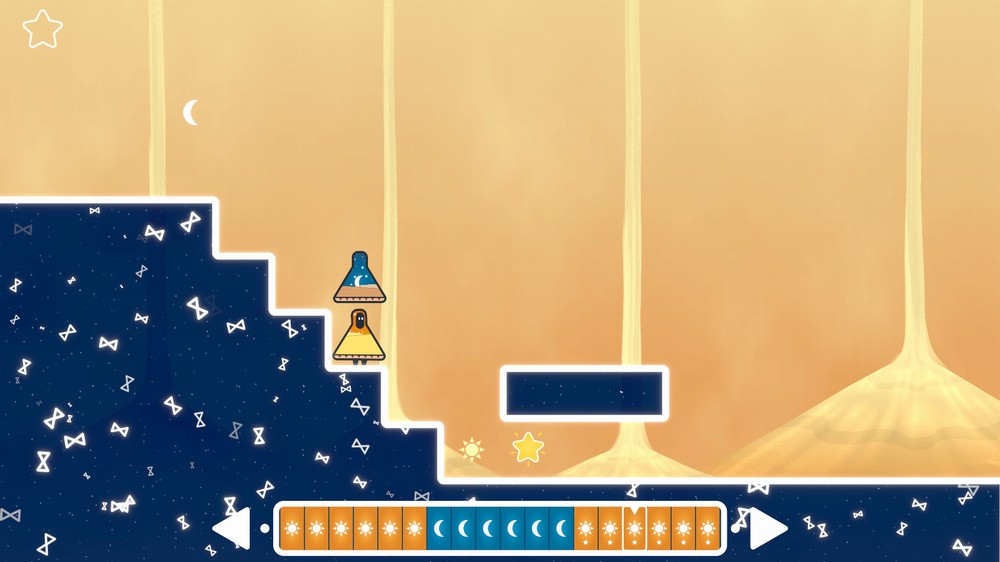 Playing as two separate pieces of an hourglass, you must move both pieces to pick-up their corresponding time token at the same time in a predetermined number of moves. Each piece of the hourglass can only be moved during its represented time (day piece during the day and vice versa). All movements are tracked at the bottom of the screen making experimenting and troubleshooting that much easier when trying to find where you’ve gone wrong. You are also able to rewind back through your movements and start fresh from any moment in the timeline. One minor gripe is the inability to click the exact moment in the timeline you wish to return to. This especially stood out when getting into some of the longer timelines later in the game. 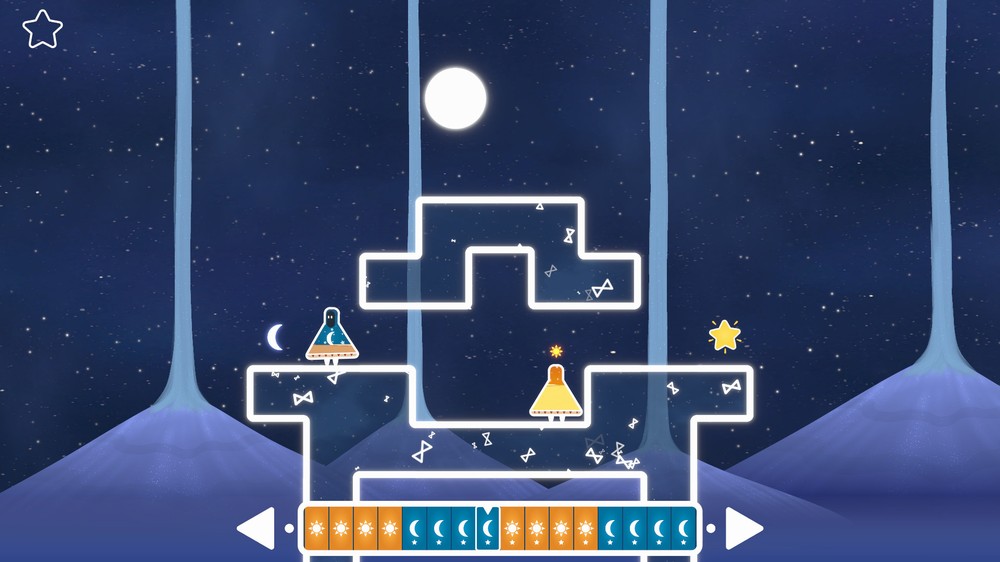 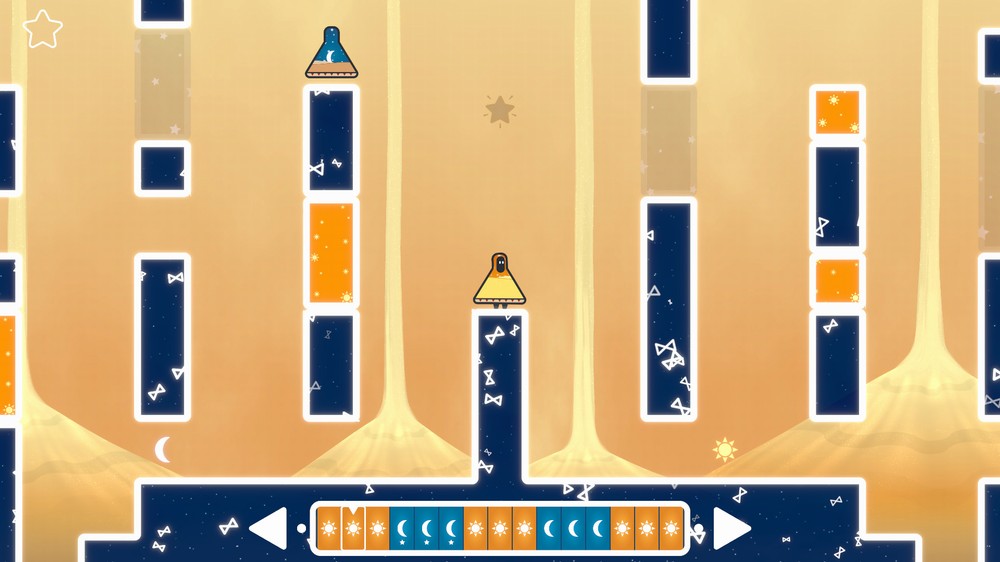 Meet Me at NooN contains 120 levels across ten worlds. Each world comes with a new set of rules and mechanics to up the challenge. Sometimes old rules intertwine into a new world. It keeps things fresh and gives you new ways to look at levels. Some mechanics introduced later include disappearing platforms, broken up turns, and a time lapse, which doesn’t let your moves play out until you’ve decided them all.   The developer doesn’t throw you straight into the fire with the new mechanics though. The first few worlds of each level serve as a tutorial for whatever new mechanic is being introduced, slowly getting players acclimated to whatever new challenges come their way. Additionally, the game has a grid that can be turned off and on. I cannot recommend this grid enough. Just having the visual grid helps immensely with planning out moves. 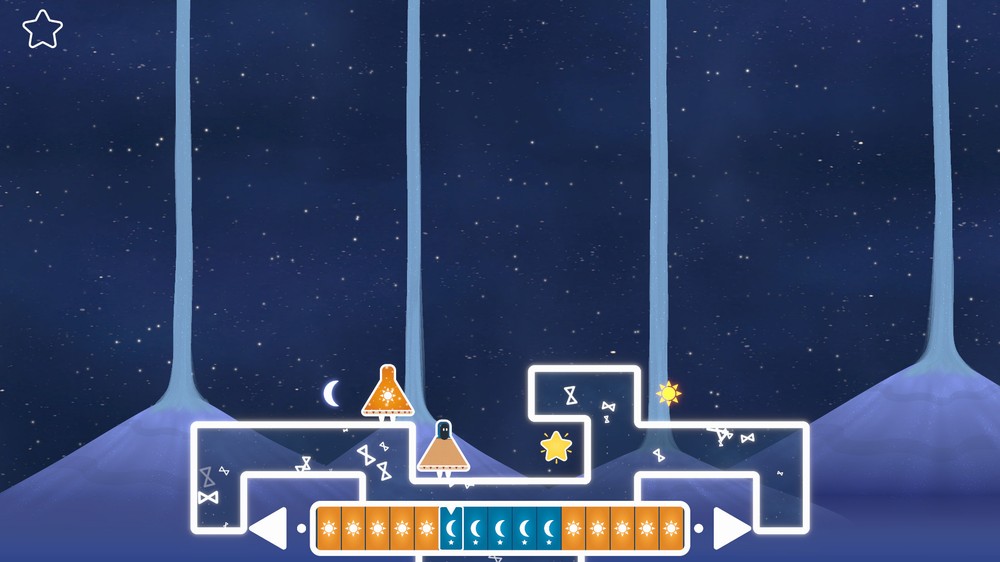 Pandaroo Interactive made numerous design choices that resulted in a very player-friendly game. There is no time limit on levels. In a world full of speed runs and leaderboards, this is a welcomed decision. You are competing against no one but yourself and the puzzle, matching the experience of doing your daily sudoku or crosswords. There is no fail state, no game over screen, just trial and error until you find the puzzle’s solution.

Across the many levels, you can collect additional stars that unlock later worlds. Collectibles in these kinds of games usually read more as a distraction and less as adding more challenge to each level. I found myself getting the star on my initial attempt in most cases. If I missed it, I didn’t feel a need to go back and get it. The game is very forgiving in this aspect as well. The number of stars needed to unlock later worlds is not some astronomical number. In fact, I never found myself locked out of the next world, if I wanted to jump ahead. 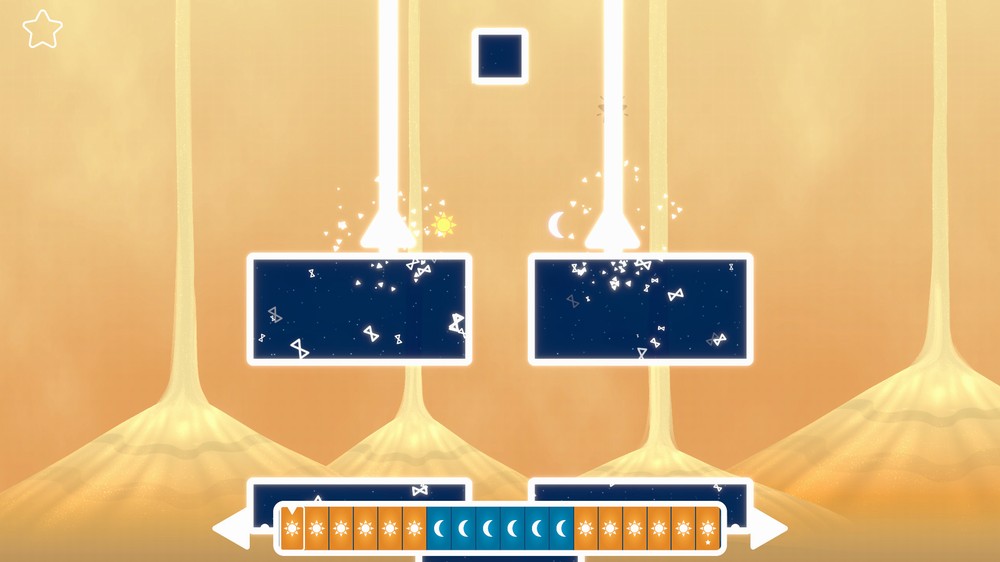 The art of Meet me at NooN evokes its themes of space and time. The use of starscapes and its two colorful leads remind me a lot of the colorful worlds and characters of 2010’s Ilomilo, another chill puzzle game. The background swap from night to day is gorgeous, but I do wish there was a little more variety in the background, especially with the cleverly named puzzles hinting at what could be going on in the background. The music adds to the overall relaxing vibe, with loops that play on the time theme but don’t grow tiresome or repetitive.

If Meet me at NooN wasn’t already low stakes, the low price of $10 drops the stakes even lower. At that price, Meet me at NooN is a welcomed distraction from the world. It asks very little of players and in exchange gives so much satisfaction with each victorious solution to its challenging puzzles.