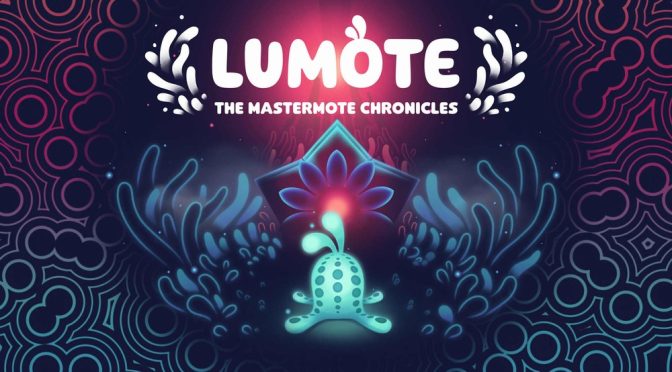 Man, the ocean is kind of terrifying. I mean, sure it starts out all fine for the first few dozen feet or so, but have you ever just thought about what’s down there? How much of it there is? And how much of that water is just full of… nothing? How things get weirder and weirder the deeper you go? I mean, yes, sometimes you see beautiful things like jellyfish, or a pretty glowy speck in front of you, but then you remember how dangerous jellyfish can be, or that the speck in front of you is the lure of a female anglerfish and the rest of them resemble less of a fish and more the head of the robots from Five Nights at Freddy’s 4. 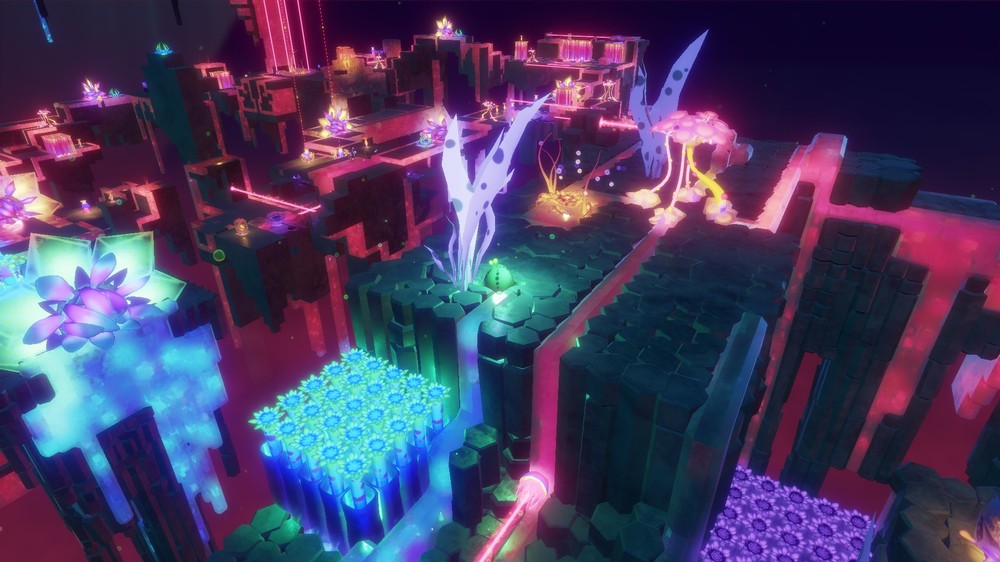 Regardless, there are some delightful and weird creatures living in the depths of the ocean. Take, for example, the sea angel, or nudibranches, both of whom are very squishy wonderful little guys. Not to mention the numerous glow-in-the-dark creatures that don’t look like they were designed by Scott Cawthon. Some nudibranches even look like bunnies!

Luckily, the world design of Lumote: The Mastermote Chronicles is based more on the latter category than the former. In the game, you play as Lumote, a small squishy thing that looks like a sea cucumber and sounds like a small child. The world they live in, normally a nice shade of blue, has turned into a dangerous looking shade of red controlled by an entity known as the Mastermote. And as every game in the history of ever has taught us, red things are bad, so you’ve got to go fix it (At least that’s what I could glean from the website and Steam page; the story in this game really isn’t super important). 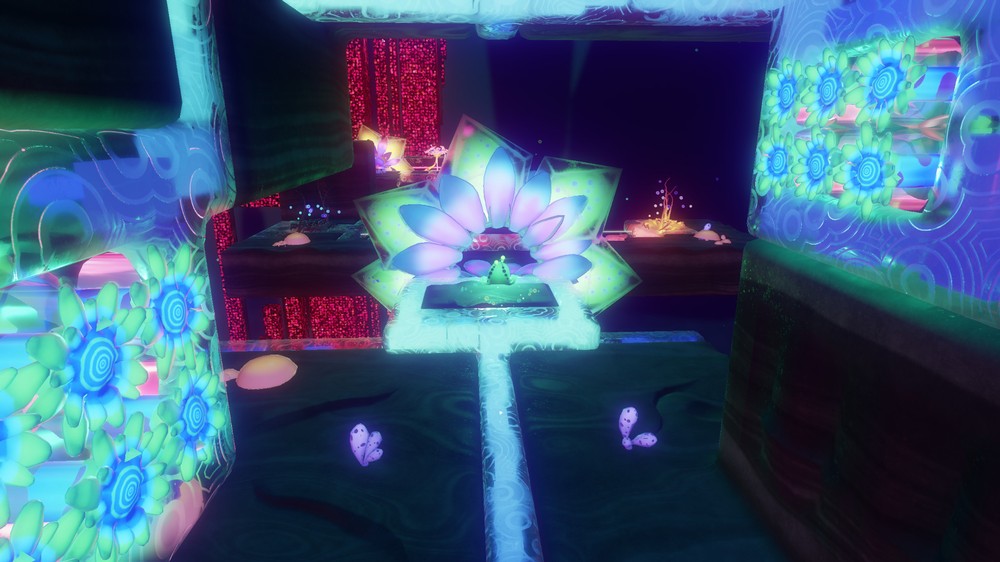 Your controls are simple: you can run. You can jump. You can double jump. And you can sit on things. This last one is where the game’s mechanics really start to come into play. The various levels are dotted with purple patches of flowers. When Lumote sits on one, things happen! Generally, this means that blue energy (which will now be referred to as simply capital-B Blue) radiates out from you along the paths in the level and interfaces with things, powering things up, chasing away the Scary Red Energy (which likewise will now be called Red) and eventually power the exit so you can continue to the next area.

Of course, if you stop sitting on flowers, you will no longer be powering them. So you need to find a way to make the things stay powered and chase the Red away. Luckily, these cube-like creatures called Dumbats, one of many other inhabitants of the world, will hold a charge when you sit on their flower, and emit it into any flower they themselves are sitting on. There’s also these platforms that are actually bioluminescent colonies of worms that stretch when exposed to Blue or Red, although if they are Red they will shy away from you or anything else charged with Blue. 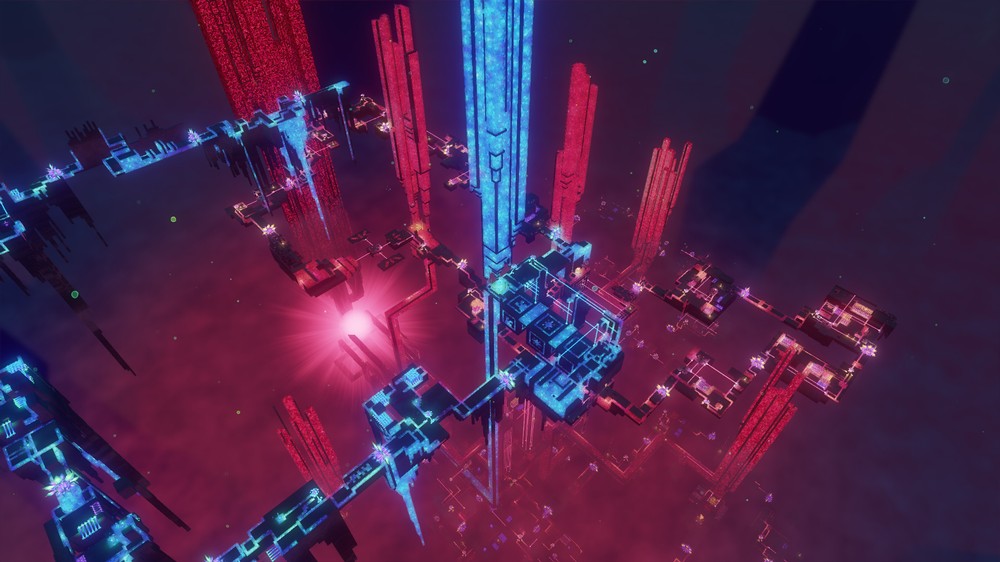 It’s a puzzle game, so experimenting with how these various props and tools interact with each other is the main gameplay loop. Your goal in each stage is to figure out how to open the flower gate that will let you progress. This is always done by making sure the plant in front of it is charged completely with Blue and no Red, but getting to that point is the tricky part, and explaining it in text is perhaps even more difficult.

Gameplaywise, it works pretty darn well, I think. The game introduces new mechanics and creatures gradually and slowly, for the most part, doing a good job of helping you figure out one way to use a given creature’s abilities and habits with experimentation. There’s not a whole lot of tricky platforming or anything, meaning most of the game’s difficulty comes from the puzzles. And they’re good puzzles! They feel quite satisfying to solve, and each time you do you get to see the Blue flow through the level and push the Red into retreat. 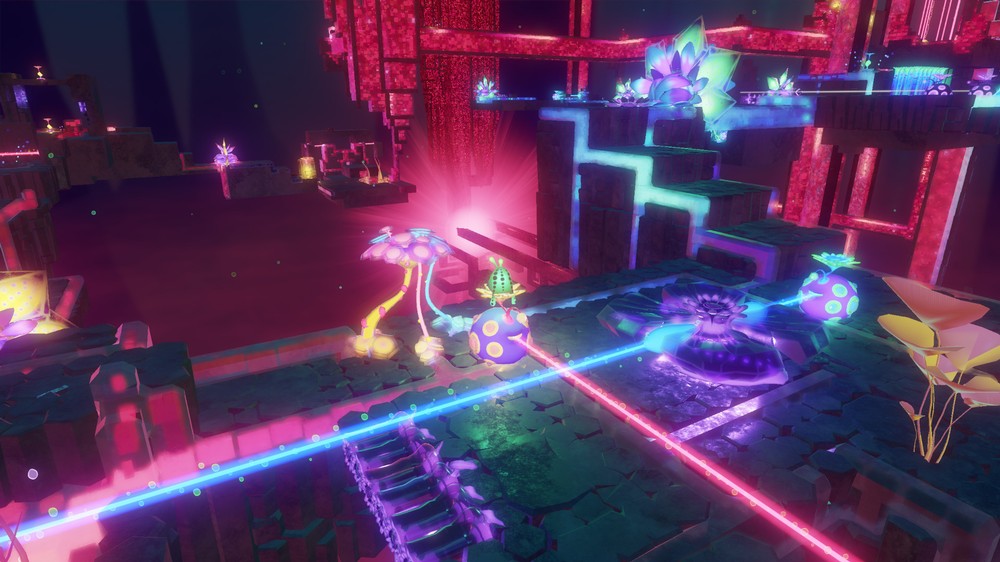 I’m about halfway through, and there’s not really enemies or health, although you do die if you fall off the level or accidentally crush yourself, which resets the puzzle you’re on. This is only a brief setback, and in my experience only happens by mistake than the developers explicitly trying to kill you. No restarting a level dozens of times so you can make that perfect jump or anything. I would also like to mention how the game, despite being 3D, feels casual and easy to pick up whenever you just want to vibe and solve some puzzles. The controls feel responsive, and puzzles only take a few minutes to solve each, so playing it doesn’t feel like a huge time commitment. Kinda reminded me of a game called A Monster’s Expedition Through Puzzling Exhibitions in that way.

Also, in case it wasn’t clear from the screenshots: the game is beautiful. It’s themed around the various squishy colorful glowy creatures in the ocean, as previously mentioned, and I want to hug all of them. There’s also an element of the Tron aesthetic of “dark primary colors with glowy blue or red accents” which is always a fun palette, even more so on squishy organic things instead of smooth electronic ones. 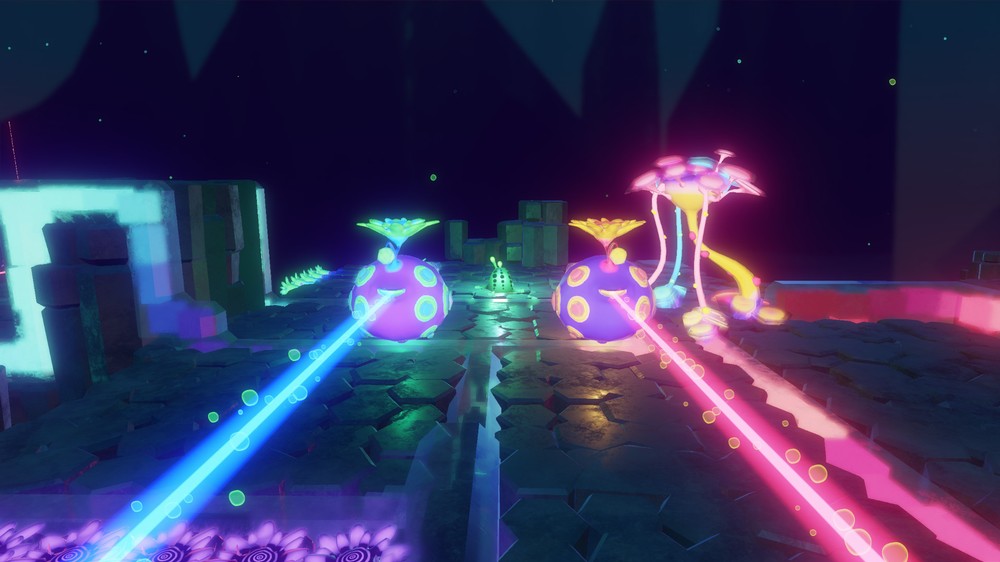 There’s also the fact that the game is one long winding path in a single massive room. You can look up or down at any point to see all the blue areas you’ve already completed above you, and all the scary red ones beneath you that are yet to come. It’s really fun just to look around and see all that progress splayed out around you, twisting into the abyss. The game even has a built in photo mode that you can use to look around and fully appreciate the environment.

The whole thing is set to this vaguely watery synthy ambient music. It changes slightly based on your surroundings, and creatures will add little noises and chimes to it as you go about Blueing things, although the Red creatures tend to make more harsh electromechanical “your hard drive’s days are numbered” noises than the smooth ones they make when Blue. 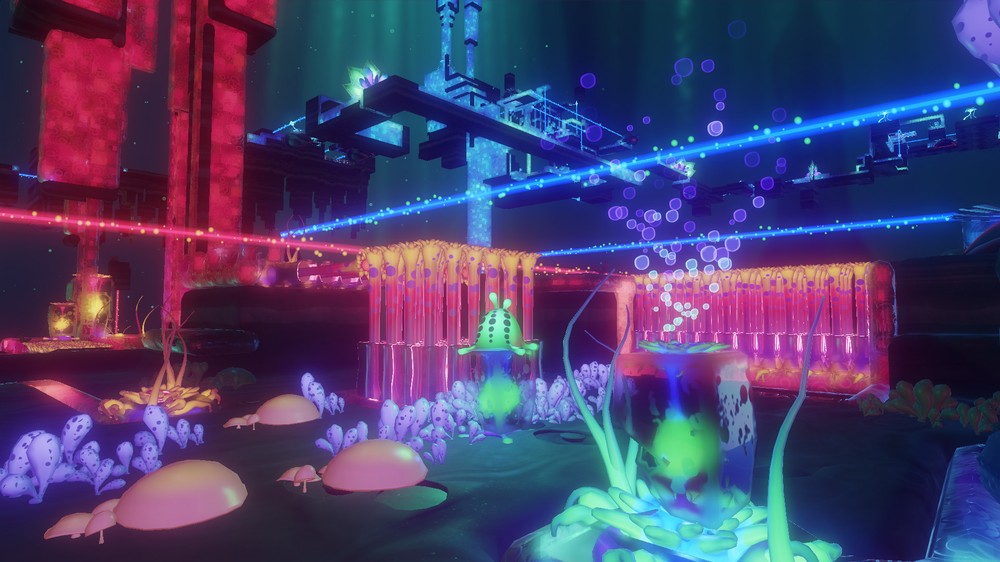 For those of you who like to find secrets, there’s even a series of little collectible relics. As far as I can tell, there’s a little golden statuette tucked away in each level. You can view them in a little gallery in the pause menu. Each statue depicts one of the creatures in the game, and if you collect, say, every dumbat relic, the little golden statue in the pause menu will change to a full colorful 3d model of the creature going about its business. Not to mention each one you collect makes Lumote say “Wooooah…!” in an adorable, hushed voice, which is pretty pleasing of a noise.

There’s a few little complaints I have about this game though. Nothing too major, for the most part it’s thoroughly enjoyable. But right now, I haven’t seen any method available for going back and collecting missed relics. There could be one later in the game, I suppose, but right now I’m just trying very hard not to miss any. Additionally, relic hunters would do well to find each stage’s relic before going to the work of running around and puzzle solving. Some of them are hidden in out of the way locations under the level, and although relics that you collect will stay collected after you die, doing so will still reset the puzzle, and should that happen it can be a bit annoying. 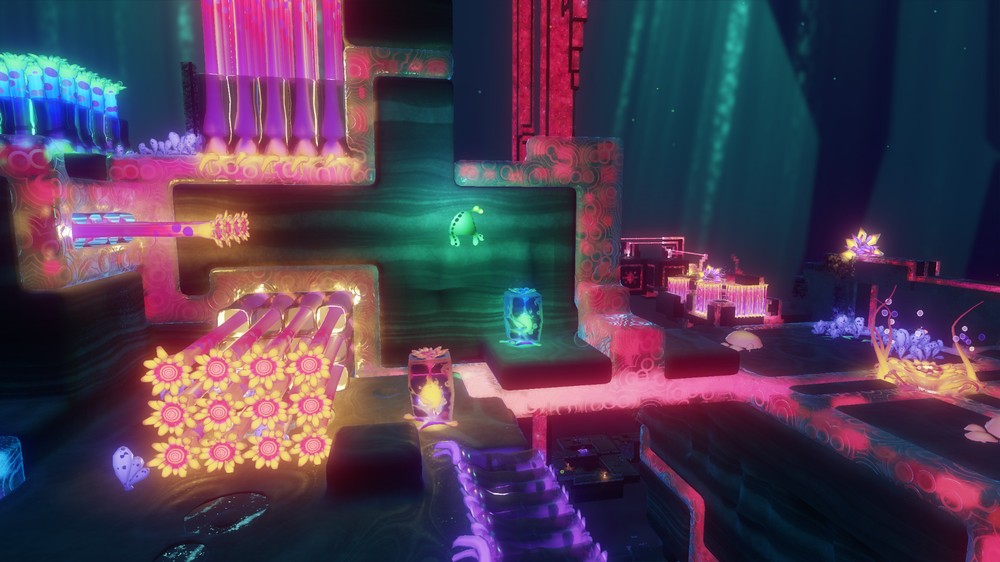 Now onto the minor nitpicky stuff. I just got to a part where they introduced about three new kinds of creatures at once in a single stage. It took me a good few minutes to figure out that this place was actually a mini hub level of sorts that was also introducing teleporting flowers to lead you to off-routes so you could learn how to use each of the things. It’s not something they introduced before and is a bit jarring compared to the rest of the game’s methods of introducing new mechanics.

Additionally, this area has these three large beams that lead off into the distance that you look like you should be able to walk on. It’s not even a huge problem to jump up to them. However, if you travel very far out you simply encounter a kill trigger and die immediately. Like I said, these two are very minor nitpicky issues. I don’t even know if most people would notice or care about either of them. 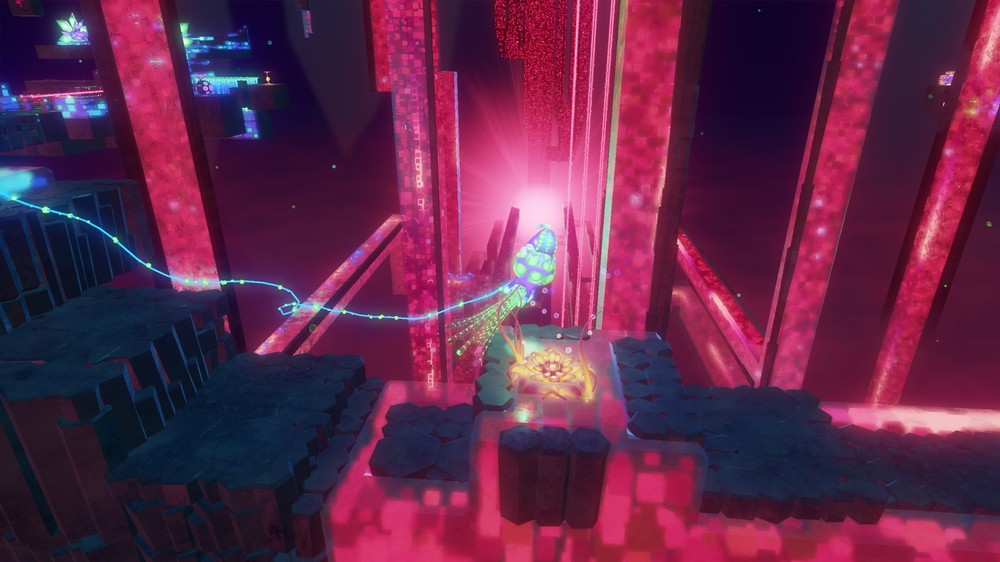 I’ve been playing for about 2.5 hours, and I think I’m about halfway through, so I estimate it’d take about 4-6 hours to finish, a bit more if you want to go for all the hidden relics. $20 may seem like a bit of a steep price point, perhaps, but there’s a lot of heart put into this game. The puzzles are fun and pretty and all feel really satisfying to solve. It’s a game that’s easy to pick up and put down again and won’t try to skinnerbox you into continuing to play it. That’s $20 going to indie developers instead of letting some billionaire somewhere buy a third yacht. There’s far, far worse ways to spend that $20.

If any of this sounds interesting, I highly suggest you check out the Steam page for more info. It’s got a demo too, in case you want to try it for yourself. Lumote: the Mastermote Chronicles is an overlooked gem, definitely worth the time and money. 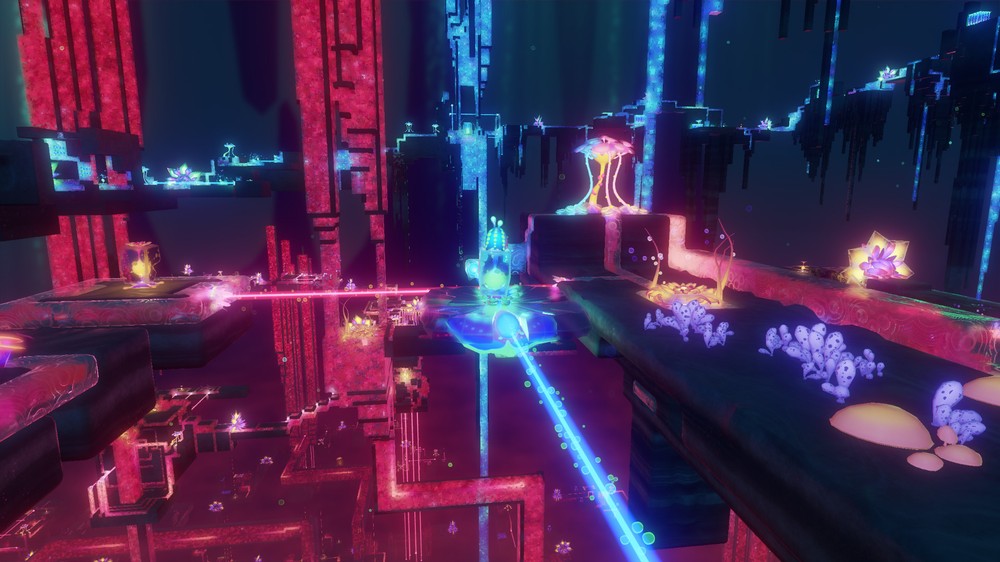 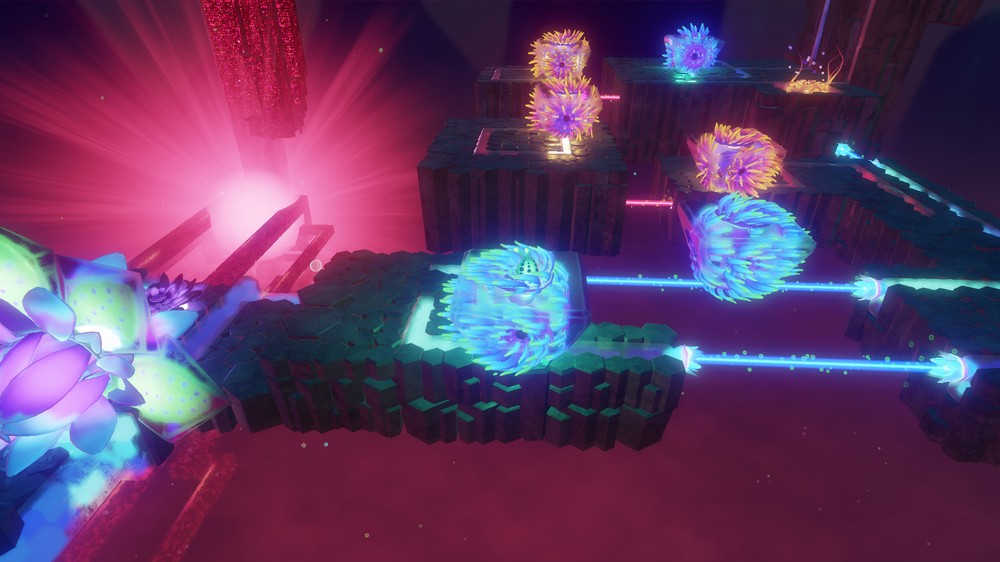 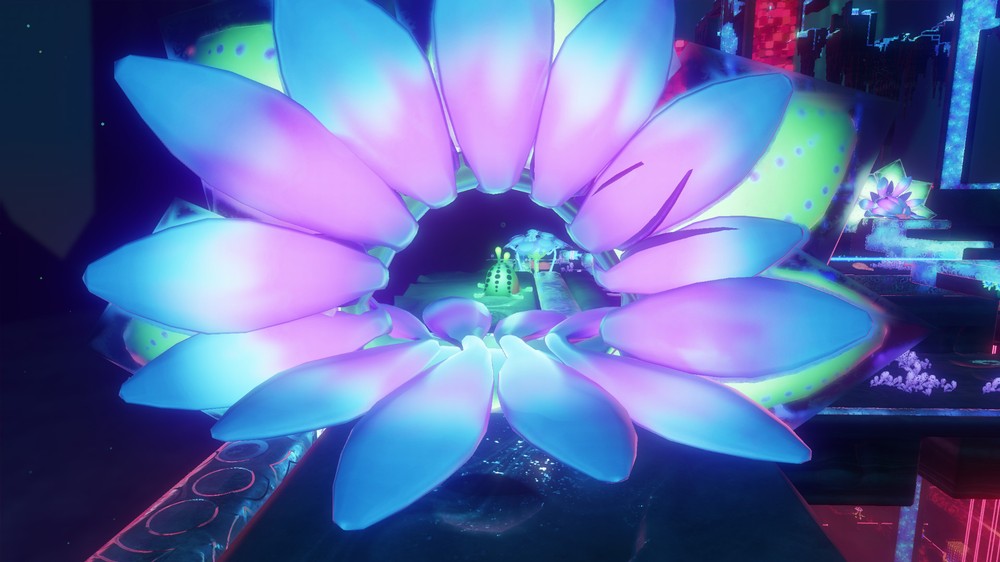