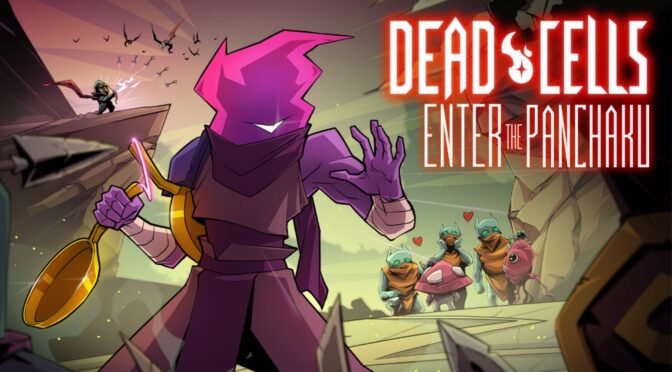 Evil Empire today announced that Update 30, the “Enter the Panchaku” update is now live on PC, coming soon to consoles. “What is a Panchaku?” you ask? It’s a weapon like nunchakus, except with frying pans that crits on enemies that are facing you and provides some wickedly entertaining combos. This item was first glimpsed in The Bad Seed trailer and has been a fan request since then. You’re welcome. A rework of 29 items in the game (weapons, skills and mutations) rebalances things throughout, and the game receives the iconic Magic Bow from popular roguelite Soul Knight in a cool weapons crossover. Lastly, but extremely importantly, you can now pet all of your pets in the game.

The Enter the Panchaku trailer showcases the weapon at its finest, complete with offering a new outfit inspired by the trailers from Bobby Digital that includes flaming pink hair. Sweet.

Fans will enjoy (or not, depending) a new rebalancing that tackles 29 weapons, skills and mutations in the game. Every so often these are refreshed to keep the variety element strong – a good roguelite should offer players difficult choices instead of relying on the same 2-3 weapons every time. Variety in a roguelite is the spice of life.

On this same note, Evil Empire has done away with old legendary items and instead introduced legendary affixes. There are a few brand-new affixes, including specific ones for certain items. They have all been hand-picked and should have synergy with the item’s gameplay. Legendaries now become stronger than your typical weapon by adding an extra, complimentary gameplay element instead of just upping the damage. There is also now a new legendary-only option in Custom Mode which makes all items legendary.

Lastly, you can now interact with all of your companions in between biomes by long pressing the interact button. This interaction has no tangible benefit other than making you feel warm and fuzzy.

Evil Empire also clarified in their dev notes today that Dead Cells has updates planned through 2023 and shared some of the goals the team is trying to hit – including a new boss rush mode. While Evil Empire has continued to grow and has other projects in the works currently under wraps and Motion Twin is also head down on creating its next game, the team assured fans that even after 30 updates, Dead Cells is still considered “mid product lifecycle” which in dev-speak translates to the game remaining a priority internally and that some excellent new features are in the works.

You can check their full comments on this topic, along with the entire list of updates here: https://dead-cells.com/patchnotes.