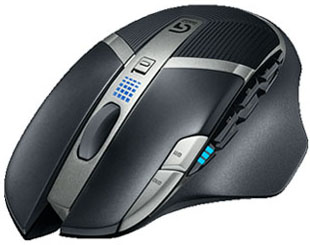 I’ve been a big fan of Logitech products for more than ten years now; everything from their keyboards and mice to their steering wheels and audio products.  I’m typing this review on a G510 keyboard using a G700 mouse and in the other room on my game system you’ll find a G710 keyboard and a shiny new Logitech G602 Wireless Gaming Mouse that I have been testing vigorously for the past several weeks for this review.

Personally, for me, mice have become less important to my overall gaming strategy.   I have a dedicated PC-TV system and 98% of my PC gaming is done with a controller; that’s just the direction gaming seems to be going, but there are a few instances when you really need a mouse over a gamepad and when you do the G602 is going to be the one you’ll want to reach for.   Games like Civilization V certainly need a mouse and while FPS games can easily be played with a controller, if you want to be remotely competitive online you had better be using a mouse.  In just the past ten days I’ve clicked the G602 a few thousand times in new releases like Battlefield 4 and the new Call of Duty: Ghosts, and you never know when some random indie game on Steam is not going to support a gamepad.   So the need is definitely still there and thankfully, Logitech is there to fill it with their latest and most capable gaming mouse in recent years. 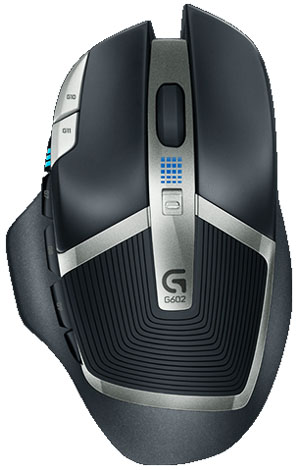 Opening up box you’ll find the Logitech G602 mouse, a wireless USB receiver, a receiver extender cable, user manual and two pre-installed AA batteries.  I thought the idea of the extension cable was a nice touch as not everyone has a front USB port available.  This way you can avoid any potential interference.  The micro-dongle is all but invisible when plugged in, and in my situation I was able to plug it into one of the pass-through USB ports on my G710 keyboard.

The G602 is durable, both in its rugged body design and internal mechanical switches that are rated to 20 million clicks.   My fingers will wear out before this mouse does.   And with 2.4GHz wireless tech and a 2-millisecond report rate, there is zero delay between thought and action.  The G602 is as sexy as it is functional.   With 11 strategically placed programmable buttons, the ergonomic design of the G602 is a natural fit for the human hand, assuming you are a righty.   Southpaws will have to seek out something a bit more universal for their gaming needs.   Using the same Delta Zero tech found in the G700, the G602 is super-precise despite only being a 2500dpi mouse.   This might give some FPS gamers pause, but honestly, I experienced no issues in accuracy on either Battlefield 4 or Ghosts.

The left side of the mouse is home to a six-button cluster that does take a bit of trial and error to master.  While I appreciate the stylish look compared to something like the Razer Naga, these thin slivers of plastic will take a few hours of play before muscle memory takes over.    Forward of these buttons is the DPI LED indicator that can be toggled using the buttons just above.    The switch just below the mouse wheel lets you toggle between the Performance and Endurance modes of the G602.  Performance boosts the tracking capabilities of your mouse at the expense of battery life, but you still get an impressive 250 hours from a pair of AA batteries.  When you are not gaming you can switch to Endurance mode and get an estimated 1440 hours of battery life, although I found Endurance mode was perfectly capable of playing less intense games like RTS and adventure games.

Of course the one caveat is that the G602 actually uses batteries, whereas most other wireless mice have their own built-in rechargeable power cells.   If those mice go dead you can plug them in to recharge and keep on playing.  With the G602 you will need to have some fresh AA’s on standby.  There is also a battery life indicator that will help you avoid losing power in the middle of a game.  I’m still using the batteries that came with the mouse, so I have no idea if battery life will be lower using rechargeable batteries.  It’s also worth noting that the G602 will function with a single battery.  While this will obviously give you half the expected battery life it does serve as a way to tune the weight and balance of the mouse if that is important to you.   Compared to my G700, the G602 is significantly heavier with both batteries installed.

The Logitech G602 works fine out of the box, but if you want to get the most from the device you’ll need to download the Logitech Gaming Software to take full advantage of what this beast can do.   You’ll find pre-fab config files for many of your favorite games or you can create your own custom button assignments using the intuitive interface.   You can program five DPI settings between 250-2500 including a “shift” setting that temporarily allows you to drop the DPI to a low number for super-precise sniping.  With all of these settings plus the Delta Zero sensor, the G602 provides fantastic tracking on every surface from the fabric on the arm of my sofa to one of Logitech’s fancy new precision mouse pads. 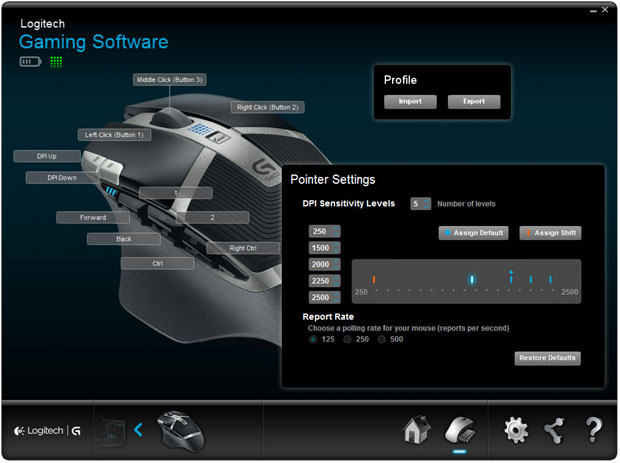 I review a dozen mice each year and I often tend to use whatever happens to be connected to my PC at the time – usually the last one that I reviewed – but the Logitech G602 Wireless Gaming Mouse is so comfortable and precise, and with it’s amazing battery life I can easily see myself going back to this mouse no matter what comes out next.   If you are a gamer in need of a quality, precision, wireless mouse then look no further than the Logitech G602.