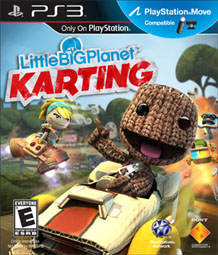 Two years ago I stuck my neck out on the game reviewers’ chopping block by making the grand pronouncement that for the first time in the history of gaming there was finally a cart racing title that was better than Nintendo’s Mario Kart franchise. That title I was reviewing was the PS3 exclusive, ModNation Racers, from developer United Front Games. ModNation Racers expertly combined the light-hearted competition of Mario Kart, with the white-knuckle racing physics of Ridge Racer, and the hip visual aesthetic of Jet Grind Radio, all while throwing in the best character, vehicle, and track user editing software – with it all wrapped up under Sony’s “Play, Create, Share” philosophy.

Prior to the release of ModNation Racers, Sony’s Play, Create, Share philosophy had been exclusively put to use in the Media Molecule’s groundbreaking PS3 exclusive LittleBigPlanet, which had singlehandedly started a revolution in user-created design and sharing. LittleBigPlanet’s robust creation tools had already garnered a community of tens of thousands of gamers building, collaborating, and sharing their user-generated creations. Nothing was off limits or out of the picture; whether it be developing scenery and costumes aping classic Super Mario levels to developing ingenious Steampunk-inspired computational devices, LittleBigPlanet’s toolbox was (and still is) a rich source of creativity, and the subsequent release of LittleBigPlanet 2 only added to the already expansive offering. 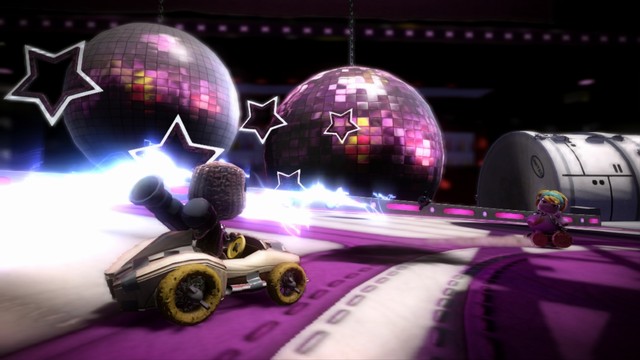 Sony hoped that ModNation Racers similar feature set would incite a similar response from gamers with its fantastically simple toolset allowing users to create their own OEM-quality characters (or Mods), carts, and tracks. And for those of us who stuck with ModNation over the past two years – it has. Over the years, gamers have enjoyed thousands of user-created mods, carts, and tracks covering countless characters from Mickey Mouse to Mario, from Sweet Tooth to Scooby Doo, and anything else you can think of. But while ModNation undoubtedly formed a vibrant community of home developers, the brand never seemed to achieve the massive amount of appeal that LittleBigPlanet has.

Unwilling to simply give up on United Front’s fantastic work, Sony has instead opted to sculpt a Play, Create, Share powerhouse in the form of LittleBigPlanet Karting. And while few would argue that the game is little more than a re-skinning of ModNation Racers to fit within the LittleBigPlanet universe, the two franchises fit together so well that LittleBigPlanet Karting feels every bit an extension of both rather than a cheap cash-in.

For those who have been wondering; LittleBigPlanet Karting starts with yet another fantastically awe-inspiring and imaginative opening cutscene once again voiced by the talented Steven Fry. If you are anything like me, this live-action film – featuring an array of vehicle-bound folks being freed from their miserable traffic-jam existence and into the bright and whimsical world of LittleBigPlanet – is worth the price of admission alone, as it really does a fantastic job rustling up a feeling of enjoyment and excitement that few games can achieve. 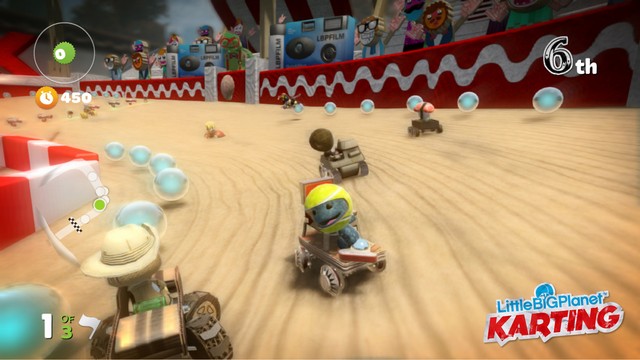 Other than the opening cinematic, the game begins with little or no fanfare; instead tossing gamers into a quick introductory race covering the different control schemes and gameplay mechanics. Gamers will quickly pick up on the drift-heavy racing style that ModNation did so well; achieving a feel that was more Ridge Racer than Mario Kart. As the game’s “Story Mode” progresses, gamers will be introduced with the more advanced gameplay mechanics, including using power-ups for both offensive and defensive means, using the grappling mechanic to clear certain obstacles, and performing tricks and drifts to gain extra boost.

It is all pretty straight-forward racing – but for folks who have not yet experienced ModNation’s unique physics, I must stress that this is not your typical kart racer. ModNation’s (and now LittleBigPlanet’s) karts have weight and traction that are more akin to a traditional full-size vehicle racing title than to the standard Mario Kart game. Racing skill and precision play a much more crucial role in the outcome; whether it’s in nailing the perfect line through a chicane, or in knowing just how much is too much in pulling off an off-camber hairpin. That being said, the physics do seem to maybe have been toned down a smidgeon in LittleBigPlanet Karting to maybe be a bit more forgiving for younger players, but they still retain that uniquely ModNation feel.

There is a story mode regarding a new group of invaders called “The Hoard”. Think of them a bit like the Minions from Despicable Me; albeit bent on driving karts to invade areas and steal the items they need. It is up to the gamer – as his or her Sackboy – to travel from planet to planet eradicating the hoard by…well…racing against them. Yes, it is a hokey premise for a story, but this is a kart racing game folks – what did you really expect? Scattered throughout each race level are prize packs (stickers, tools, etc.) that the gamer can collect to use in their own future constructions. The prize packs are littered both along the main course routes and on the many shortcuts and secret passages found along the way. 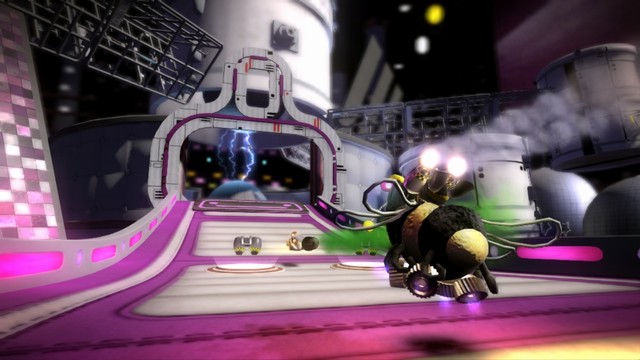 The story mode courses all have the miniaturized cardboard and tape aesthetic that we have come to associate with LittleBigPlanet, and the use of textures and colors is every bit as detailed as we see in the main franchise. The burlap looks like burlap, and the sushi looks like sushi. What, sushi? Yes, one of the early unlockables is a sushi-inspired kart that had wheels made of sushi rolls – but that’s not all you will see as there are wheels made of old spigot handles, sponges, balloons, and eventually just about every other fantastical round object you can think of.

Gamers can mix and match cart parts using items earned throughout the levels as part of the prize packs. Over the course of the story the available items are eventually too numerous to count, however all of the items seem to be little more than tacked-on visuals rather than the true modifications that could be performed with ModNation Racers which was a little bit of a letdown.

Much like any previous LittleBigPlanet title, gamers can dress up their Sackboy in a multitude of different costume combinations through the games original set of objects, and then objects obtained through the various prize packs. The game even mentions the future ability to import Sackboys and unlocked Sackboy items from the previous games. I can’t wait to import my Muppets-themed Sackboy items to see Fozzie Bear drifting through a hairpin in my sushi kart!

When talking about the creation aspects of the game, the real crux is in the Track Editor. Built off the well-featured ModNation Racing track creator, LittleBigPlanet Karting likewise has gamers painting (with a paint roller) courses across a huge square of landscape. Gamers have full X-Y and Z axes of motion, allowing them not only to move horizontally about the game field, but also down in or up above. The editor runs nearly seamlessly, even when crisscrossing over or under previously laid track – instantly forming appropriate bridges and underpasses. I say nearly seamlessly, as there are times the system comes to a stop as it renders particularly overwhelming segments. It can be a little frustrating, but we have never had a complete crash or freeze so it no more than a minor inconvenience. 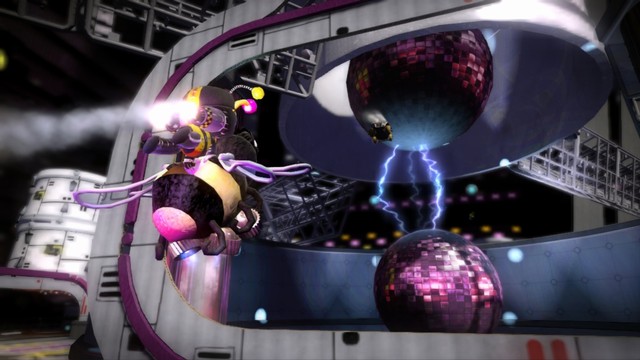 I was thoroughly amazed at the tracks that I could make, but even more astounded by the creations of my 10-year old son, who spent hours perfecting lines, banking curves, and modifying the landscape. Unlike ModNation, LittleBigPlanet’s editor lacks an “auto-populate” feature, so making a truly appealing visual appearance takes a lot of attention to build and place all of the objects. But like the previous LittleBigPlanet releases, Karting allows gamers to build, share, and implement logic items (virtual machines) into the gameplay. I have yet to come across a track in which I knowingly encountered one of the logic devices, but the fact that they are there is a good sign for the future of the game.

Finally, I have to discuss the Share portion of the formula – and LittleBigPlanet Karting is already off to a pretty good start when it comes to sharing. While lacking the character and kart mods of ModNation Racing, there are already there are thousands of user-made tracks to enjoy under the “Community” world. Gamers have already faithfully recreated dozens of classic Mario Kart levels (complete with turtle weapons), Walt Disney World themed levels, and scores of others. This nearly un-ending supply of OEM-quality tracks means that LittleBigPlanet Karting could be the last karting title gamers would ever need to buy.

In closing, I cannot say enough about LittleBigPlanet Karting. It is a fantastic racing title released to augment and already fantastic platforming franchise. Because the title was helmed by the folks behind ModNation Racers, it got all of the love it needed to be one of the best racing titles of this season. However, I must say that I still think ModNation Racers is a superior racing game in all, and stands as the best kart racing game ever made – but LittleBigPlanet Karting makes a strong showing and is well worth your time and money. 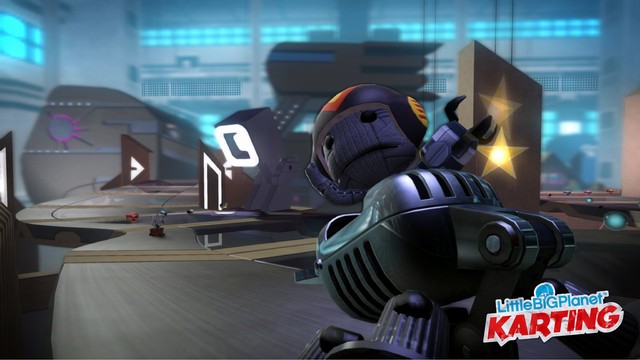 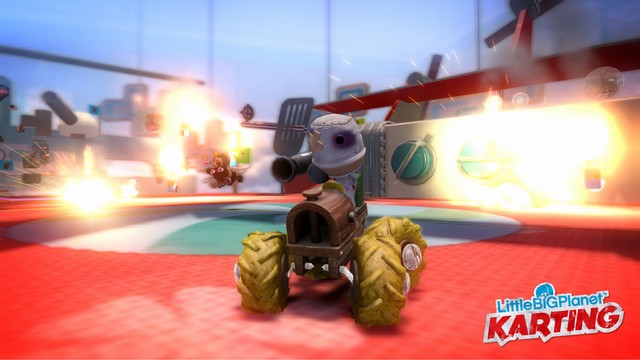 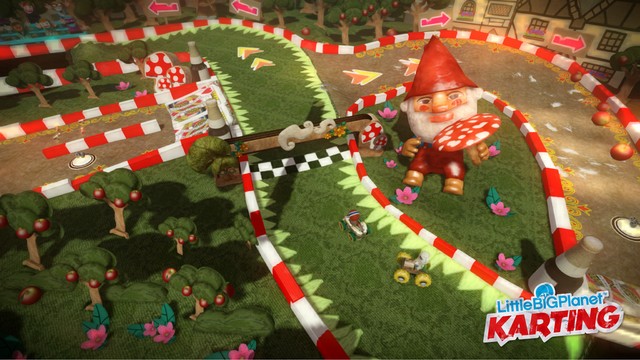 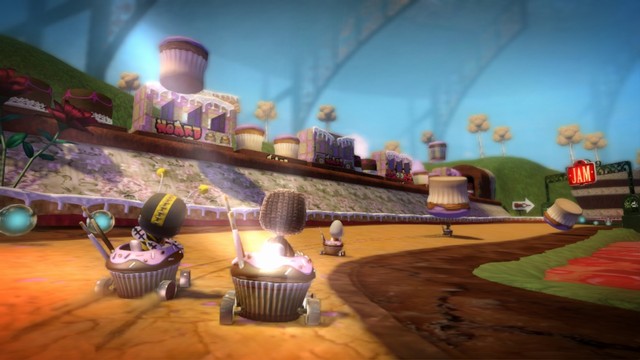 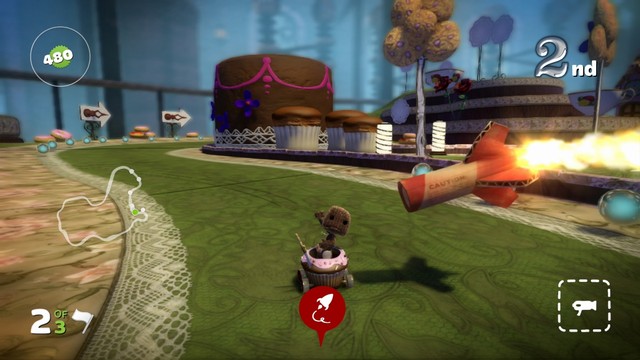 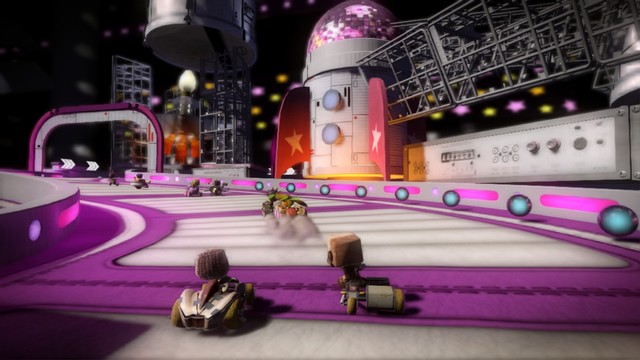 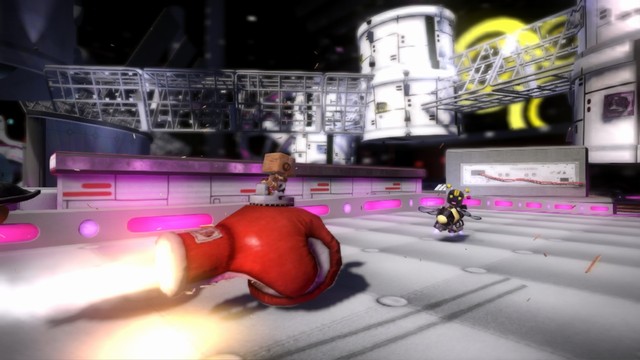