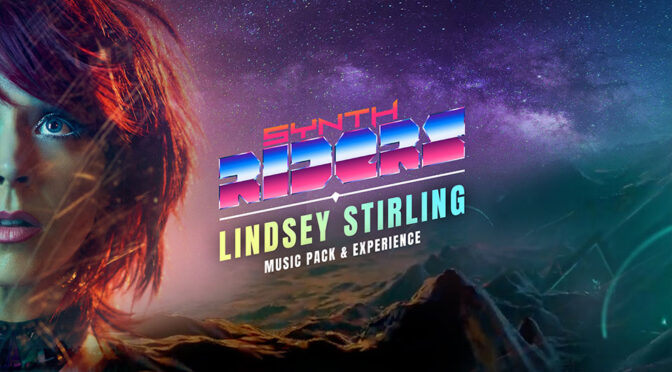 After four attempts to create some video content for the Lindsey Stirling Music Pack for Synth Riders I’m giving up.  Neither YouTube nor any of the record labels working with Lindsey Stirling’s music seem to acknowledge the concept of “fair use”.  It’s a shame really because to see this game in action totally makes you want to play it, but I will try my best to describe this awesomeness with mere words…and this fancy trailer.

Simply put, Lindsey Stirling’s music is the peanut butter to Synth Riders’ chocolate.  The very nature of her chosen instrument along with her chosen style of music is the perfect fit with Synth Riders virtual body interactions.  Moving your hands and swirling your arms just seems so naturally in-sync; something the game has been praised for previously, but it has achieved a new peak of greatness with this expansion.  Immerse yourself in five of Lindsey’s best tracks:

I was disappointed that you couldn’t use the visual “experience” on any song other than Underground.  You’re likely to start with that song and get spoiled really fast with not only an amazing song choice but this whole new virtual world dedicated to Lindsey.  It’s like getting to perform in one of her own music videos.  I was impressed with the difficulty, which can provide a good challenge even on the Normal setting, throwing in some unexpected body panels to dodge, then scales sharply with the addition of new notes/beats and more complicated trail designs.  You’ll get a major workout trying to keep up with Lindsey in this virtual tour.

If you are a fan of Synth Riders then you owe it to yourself to get this song pack, and if you are a fan of Lindsey Stirling’s music then I’d say this track pack is also reason enough to purchase the core game just to experience her music in an entirely new way.   I’ve been playing Synth Riders since it launched, and I have played all of the extra tracks and music packs that have released since, and I can honestly say, this is the best song pack to date.  But music is subjective, and I may be a bit biased when it comes to Lindsey.