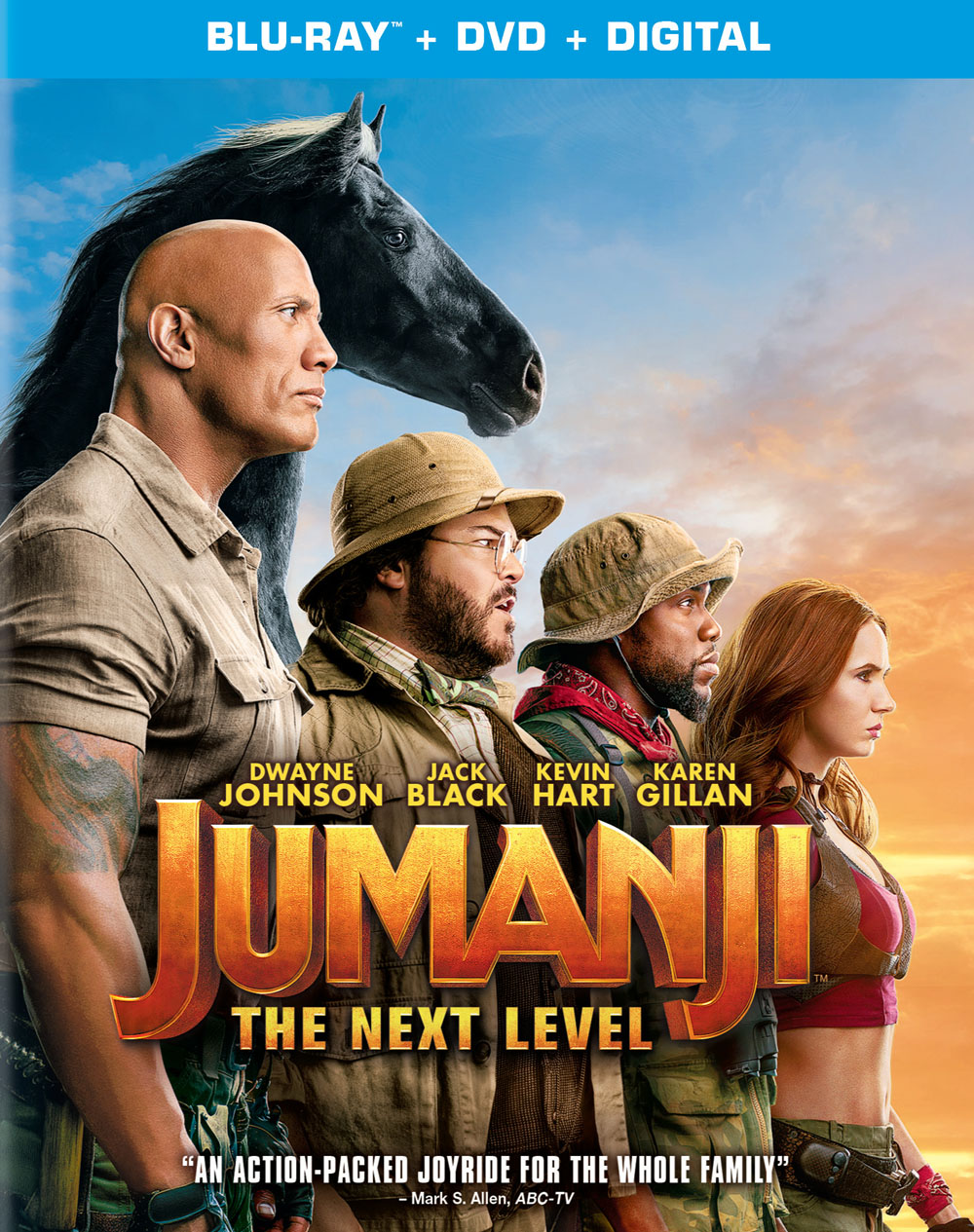 After the huge success of the previous Jumanji movie we all knew the gang would be back for the inevitable sequel and here we are. Jumanji: The Next Level is a by-the-numbers sequel that checks off all the boxes for a holiday blockbuster title; one that would dare compete with the Star Wars finale a week later. Somehow I never found the time to see this in theaters – probably because Star Wars kicked it out of my IMAX before I had the chance – so I was super-excited to check this out at home on my recently upgraded home theater setup. Sadly, I only got a Blu-ray copy for review which is what I will cover and score in this review, but I did get the IMAX-Enhanced UHD on my own just to make some comparisons.

Straight up, Jumanji: The Next Level isn’t as good as the original. The sequel seems more concerned with visual spectacle and wild special effects than quality storytelling. Admittedly, the creators try to mix things up by doing the old body-swap trick…multiple times…before realizing their folly and resetting the cast back to “normal”. Part of the travesty lies in adding two new characters, Milo (Danny Glover) and Eddie (Danny DeVito). I love these two actors and the parts they played in the real-world were just fine, but when everyone starts getting sucked back into the game (which is now all busted up and barely working) certain changes take place. Martha (Karen Gillan) is the only one who retains her original avatar of Ruby Roundhouse. Eddie is now Bravestone (Dwayne Johnson) while Milo becomes Mouse (Kevin Hart). Fridge is now Professor Oberon (Jack Black) and Spencer, who goes into the game ahead of everyone else, becomes a new cat burglar character, Ming (Awkwafina). Bethany gets left behind initially, but after seeking out Seaplane (Nick Jonas) manages to get sucked into the game as a horse. If that sounds confusing just wait until the group finds magical green waters that allow them to swap characters within the game.

My main complaint with the movie is the performances, mostly from Johnson and Hart. In the original movie everyone just played their natural selves but now we have Johnson doing an incredibly lame impersonation of DeVito and Hart doing a slightly better (but still bad) impersonation of Glover. There are minor moments of amusement but for most of the movie these characters are exaggerated caricatures of themselves that simply distract and annoy. At least Jack Black was able to pull off an angry young black man. Having two new people (old people) enter Jumanji then constantly explaining and re-explaining the concept of being “inside a game” was as annoying as putting VR goggles on your grandpa and trying to make them good at a game without crashing into the furniture.

The story didn’t flow nearly as well as the first film. Once again we have a stolen gem that needs to be rescued from the evil Jurgen the Brutal (Rory McCann) who is just as impressive as he was in Game of Thrones, towering over the Rock by at least two feet. The quest for the gem meanders across a self-revealing map of various climate changes and two action-packed set pieces; one with a herd of stampeding ostriches and another with our heroes getting chased across a massive array of rope bridges while being chased by vicious Mandrill monkeys. I got the distinct impression that the creators had these two epic scenes in mind from the beginning then just tried to fill in around them to create a movie and reach the big boss fight at the end.

Plot aside, I’m here mostly for the technical aspects of these home video reviews and unfortunately the Blu-ray edition did not impress me even before I re-watched the UHD version. I don’t want to come off as a UHD-snob but with the exception of my weekly network TV viewing nearly everything I watch is sourced at 4K/UHD whether on Netflix or Disney+ and when you throw HDR into the mix I instantly know when something is off. When HDR mode kicks in I have to shield my eyes from the glow coming off my 85” Sony, so when I fired up Jumanji: The Next Level on normal Blu-ray the picture was rather dull and lifeless. Sure, my Sony 4K player and my TV were doing an admirable job upconverting the 1080p image to 4K but scenes that should have been blinding, like in the desert, weren’t and there was just an overall softness to the live-action scenes that contrasted the ultra-sharp CG-only scenes. Colors were natural and black levels were decent during the nighttime scenes. Compared to the UHD version where the 2160p resolution means better detail in both characters and backgrounds as well as colors that leap off the screen and HDR that greatly enhances those same nighttime scenes without crushing the blacks…well, there is no comparison. The 4K version is clearly the better movie.

The audio mix is also lacking, and with no Atmos support we only get a DTS-HD 5.1 MA mix on the Blu-ray while the UHD version at least gets a DTS: X to capture the overhead effects. The sound mix is rather dull and lifeless compared to other action movies releasing at this time. There is good prioritization of the dialogue and some quality LFE moments (mostly the tribal drums), but you don’t realize how flat the mix is until you hear the DTS: X on the UHD version and things really open up. It’s like “shaking the water out of your ears” different.

Don’t be fooled by the surprising amount of extras on this disc; most are short and disposable. The 5-minute Gag Reel offers up a few chuckles and the 5-minute Body Swapping: Snapping into Character details the new characters and the old characters playing new characters. The 4-minute Back Together: Reuniting the Cast talks with the cast about how they knew all along there would be a sequel and their excitement to return to Jumanji. Level Up: Making Jumanji: The Next Level is the first substantial feature that covers numerous facets of making the sequel while Creating the Scene are two short features on the digital and physical creations of the Ostrich Chase and Mandrill Bridge. Rhys Darby Wants to Jingle is a disposable bit that ultimately ends with a lame music video. Awkwafina Cat Burglar gives the actress less than two minutes to discuss her new character in the film while NPC Confessions: Jurgen the Brutal gives the hulking actor three minutes to discuss his part as the new villain. Next up are three one-minute snippets; Grow Up, Telenovela, and Trick or Treat. Last up is more coverage on the Ostrich Chase and Mandrill Bridge scenes; this time using side-by-side comparison of CG previz and the final production; one of the better bonus features of the batch. There are some Sony previews and a digital Movies Anywhere code also tossed in to top things off.

Jumanji: The Next Level falls short of what I expected after such an amazing predecessor. In their attempt to change the formula enough to make it fresh they ultimately spoiled a lot of the charm and storytelling that captured us the first time. Watching Dwayne and Kevin’s lame impersonations of the two Danny’s was distractingly annoying, and I only truly enjoyed myself during the final act when everyone was back in their original avatars. Still, the flick is a fun ride although severally limited in its Blu-ray form. With good, but not good enough visuals and an uninspired sound mix you will certainly want to step up to the UHD version for the best home viewing experience.