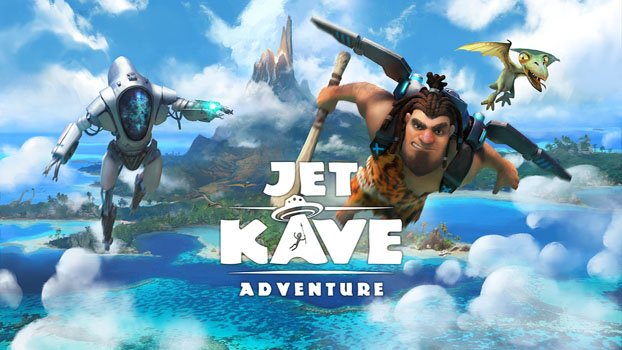 Cavemen, aliens and jetpacks – Jet Kave Adventure is a platform action game where the Stone Age and Science-Fiction collide. A caveman named Kave, who did not prove himself as a chieftain and was banished by his own tribe, accidentally stumbles upon… a jetpack and stands up to fight an alien civilization! Enjoy the beauty of the prehistoric world and the thrill of its exploration! Fly over pitfalls, smash through walls, knock out enemies and manipulate objects as you master the jet-fueled platforming to stop the alien threat once and for all.

Kave is the chief of his tribe – or rather was until now. Banished by his own people, he stumbles upon… a jetpack! The device turns him into the only caveman who can stand a chance against the alien invader, a rather unlikable guy from the sky who will readily kickoff a disastrous volcanic eruption only to repair his spaceship. The jetpack is a real game-changer – both for Kave and the player. Fly over pitfalls, smash through walls, knock out enemies and manipulate objects as you master the jet-fueled platforming to stop the alien threat once and for all.

Jet Kave Adventure is available for 14.99 EUR or 14.99 USD on PC, next-gen consoles – Xbox Series X|S and Xbox One. A playable demo is up on Steam and the game is available with a 33% discount for the first week. The game by a producer and publisher 7Levels, so far available only on Nintendo Switch, is their first original title to appear on other platforms.

Get ready for a thrilling, colorful Stone-Fiction adventure in 4K and 60 frames per second!