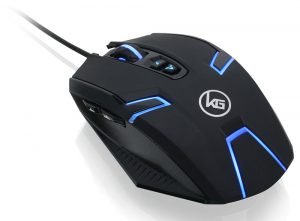 As a gamer that frequently plays PC games having the right equipment is high on my list when it comes to playing at my very best. I’ve used a wide variety of PC peripherals over the years and am always curious about what’s out there. One of the largest concerns that I’ve seen in the gaming world is that there isn’t a real huge presence in the world of left handed gaming mice. As I have a friend or two that just happens to be left handed that plays PC games so it’s nice to see when companies come out with a product that tailors all gamers like IOGEAR’s new Kaliber Gaming™ SYMMETRE Ambidextrous Gaming Mouse.

After you finish processing the mouthful that was that mouse name, I’ll get right into my review of the SYMMETRE. IOGEAR has been in the business of creating a wide variety of computer connectivity solutions for years now and I’ve even used more than a few of them myself in that time. The new Kaliber Gaming line of gaming peripherals available today is yet another step towards continuing their goals to making the complicated world of technology just a little bit user-friendly. Enter the SYMMETRE which has the notable distinction of being a customizable gaming mouse for both left and right handed users alike. 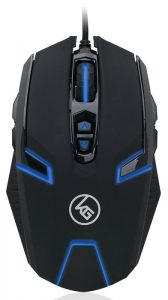 The first thing I noticed as I unboxed the SYMMETRE is that it definitely lives up to its name with a sleek identical design on either side of its ABS and polycarbonate form. For a gaming peripheral, the SYMMETRE is a fairly low frills mouse with only the pure essentials for quick use and response both in and out of games. Unlike their high end multicolor lighting FOKUS mouse, the SYMMETRE is accented with a simple but sharp blue lighting scheme that by default ebbs with the popular “breathing” effect seen in a lot of other gaming peripherals. Rounding out the design are rubber pads to help against slip and a sturdy braided cable measuring 6.5 feet that allowed for plenty of play in cord with little physical drag with my current setup.

The SYMMETRE however couldn’t rightly be called a gaming mouse though if it didn’t offer at least some features to separate it from your average multi-button peripherals right. Rest assured though as even IOGEAR’s entry level gaming mouse has enough customization to keep both casual and hardcore gamer happy. The SYMMETRE features a 9 button layout designed to offer two thumb buttons on either side fortifying its ambidextrous design. By default the standard left side (based on right handers) allows for browser navigation while the opposite controls the master volume for your PC. The two arrowed buttons under the scroll wheel allow for quick DPI switching between the 5 presets ranging for 500-4000 DPI depending on the precision or fluidity you need at any given moment. 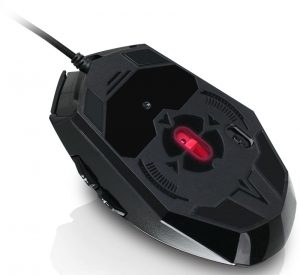 I ran the SYMMETRE through the ringer testing it on everything from click heavy adventure titles to online shooters like Overwatch to the fast paced online playgrounds of my favorite MMOs and RPGs and I got to say for a $25 dollar mouse it performed admirably thanks to the customization allowed by the separate Kaliber Gaming software made available from the SYMMETRE product page on IOGEAR’s website. This software allows you to customize and program the SYMMETRE pretty much anyway you want. I particularly like the option to create up to 5 different configurations and if you so choose program one of the buttons to switch between them on the fly.

As an avid MMO and RPG player, I will admit that the SYMMETRE doesn’t completely satisfy my needs when it comes to that front but it seems that even IOGEAR has that covered a bit with the ability to utilized the software’s included macro manager to create your most commonly executed commands in your favorite MMOs. On average I would try around 3-4 macros assigned to the side buttons which works decently although hitting the bottom button on the right side was a little uncomfortable. That said the SYMMETRE can be used for so much more than pure gaming applications as you can program it to open programs, control multimedia programs and other inputs from a slew of options at the press of a button or two. 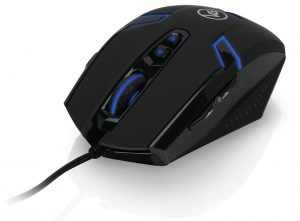 At the end of my time with the new Kaliber Gaming™ SYMMETRE Ambidextrous Gaming Mouse, I have to say that I was impressed with the versatility that such an unimposing mouse could deliver. Tapping out at 4000 DPI it might not make this the ideal choose for the truly hardcore PC gamer out there but it held up to most of my gaming needs so that area is something wholly up to the individual user. The ambidextrous design of the mouse and its customization is what I really think makes the SYMMETRE valuable without having a huge price tag compared to similar products. For all you gamers out there, especially those left handed brethren, you definitely should check out the new Kaliber Gaming™ SYMMETRE Ambidextrous Gaming Mouse by IOGEAR at your local electronics retailer or online story today.