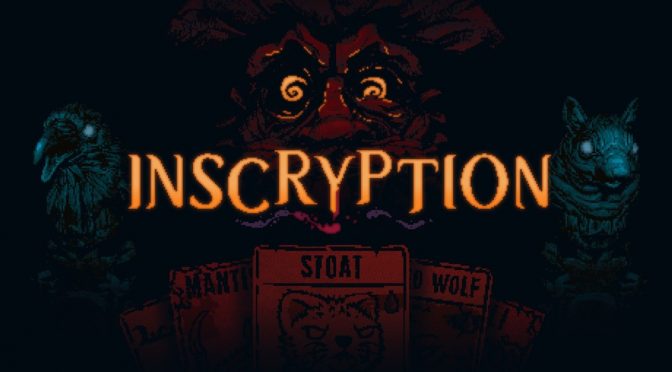 From the moment you fire up Daniel Mullins Games’ Inscryption you are transported back to the PlayStation One’s early, polygonal world of a sinister card game. The game’s premise is that you’re locked in a room, and tasked with defeating a mysterious stranger in a card game/tabletop narrative where your “dungeon master”, has you trapped in a game of life or death. It’s one part deck building, one part roguelike, and one part puzzle-solving all combined into a potent cocktail whose game loop is easy to overindulge on. Certainly a unique and creative combination of genres, Inscryption is a must for deck-building fans or even mobile game fans of the 2012 breakthrough app, The Room. 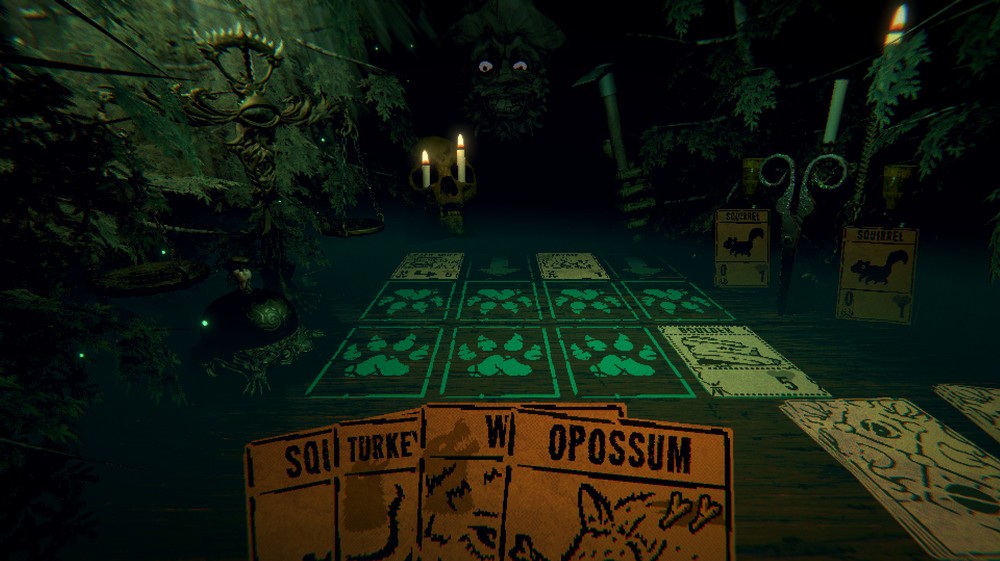 This psychological horror game is published by Devolver Digital. Those in the know will immediately understand the brand of eclectic, independent titles the publisher has been known for. Over the last 5 years, Devolver Digital has sought to disrupt the independent developer space by backing creative game ideas without compromising on artistic vision. Daniel Mullins certainly fits the bill as the mind behind Pony Island and The Hex. True to form this is a real feather in the cap of Devolver Digital and an outstanding example of what happens when creative integrity is allowed to flourish. Nothing in this game feels focus-tested or mass appeal and I love it.

You‘ll awake to find yourself in a purgatorial, blacked-out room with a sinister set of eyes staring at you from across the table. Like any good roguelike, you should expect to die and die often. Once the game walks you through the basics of this dark tabletop contest, you’ll inevitably lose and be forced to endure having your photograph taken. Each photograph will produce a new powerful card you have a chance of acquiring on your way to defeat your foe. There are intermittent boss fights that serve as waypoints along the journey and the game gives you the means to fast track your way back to where you left off. 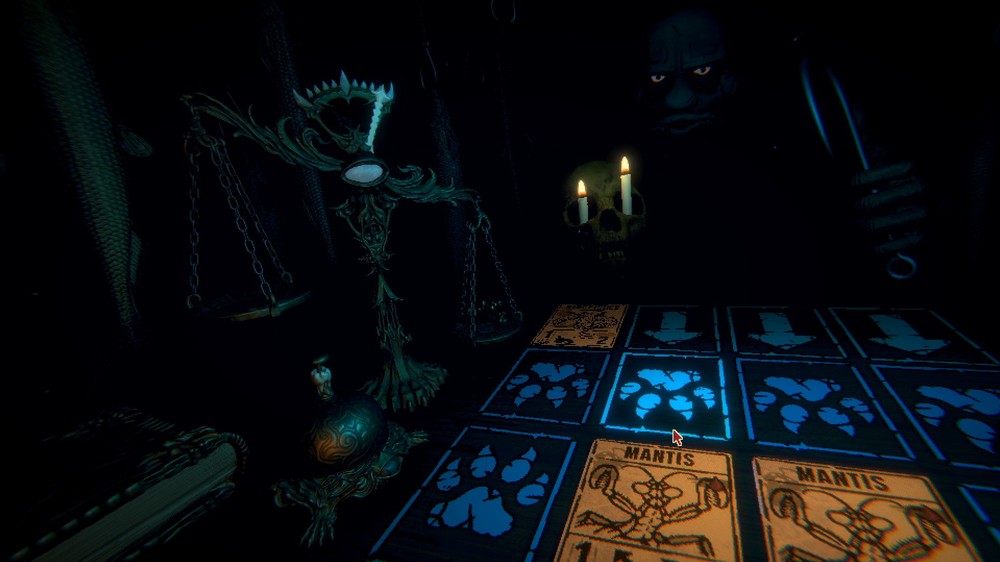 The candle-lit table is surrounded by various artifacts, puzzles, and books. In between game sessions you can examine and explore as you see fit. Each puzzle was rewarding and illuminated a little bit of information as to what the nature of this world is. Upon playing a particular card you will realize that there is a sentient being attacked to the two-dimensional representations. This adds weight to the sacrificial mana system laid out by the mechanics of the game.

Those familiar with deck-building combat games will feel right at home. Instead of mana you have sacrificial squirrels, instead of health points, you have teeth, instead of artifacts, you have plyers to pull out said teeth. The game bleeds macabre and psychologically dares you to both play and try to escape. It’s complemented by an excellent soundtrack and art design that allow you enough separation due to the “low-res” nature of the design but enough squeamish buy-in to ask you to slaughter your creatures to spawn new and more powerful fighters. This is further exhibited by the writing, communicated by text, that illustrates just how out of your control your fate is. 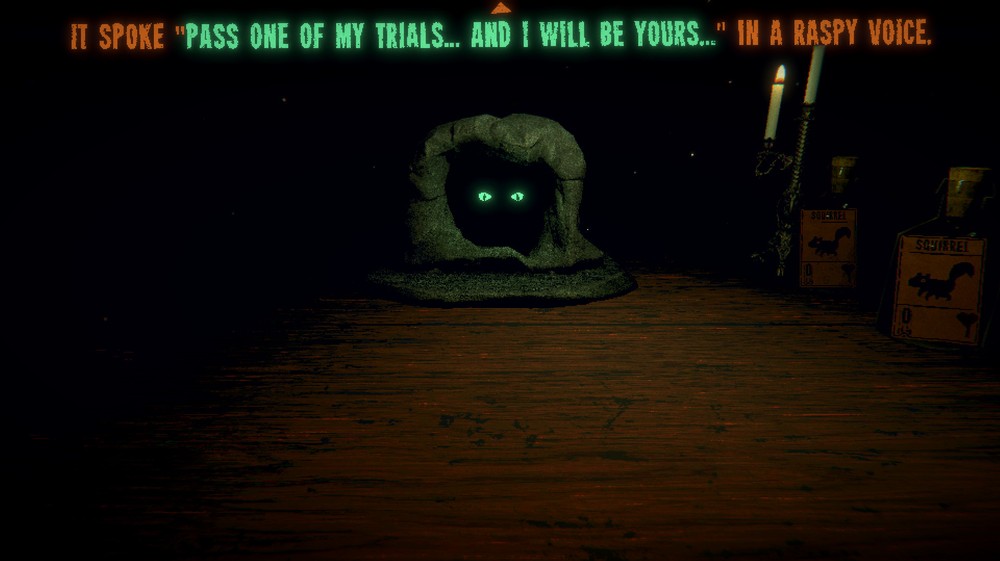 I loved when my opponent would role-play as various characters I’d meet along my journey. I had a crazy cole-miner and a murderous fisherman each represented by a mask my evil “dungeon master” wore. With each boss battle, there’s a new modification to learn and overcome. Sometimes you’re speaking cards will help you solve the current challenge and other times they will ridicule you for not making wiser choices.

If I have one criticism it is that roguelikes are always inherently flawed. Whenever you have a random element on the draw of your cards, you’re bound to have better luck and worse luck at times. This means that you can be battling your second or third boss, knowing that you probably won’t make it to the end because of a bad start. While I know you can always restart and try for a better starting hand, the crux of roguelikes is the randomness of each life. If this is something that is off-putting to you, then I’d recommend you think twice before laying down the appropriately 20 bones to partake. If you’re not already a fan of roguelikes, this will not change your mind. However, if you know what you’re in for, then this is sound money for hours of dark entertainment. 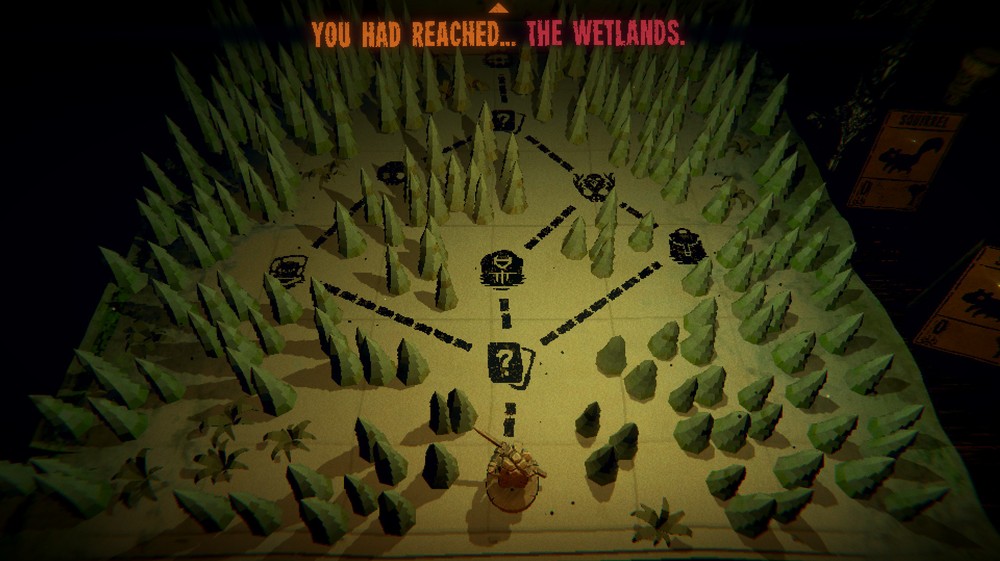 Although I have not yet completed the campaign, I cannot stop playing this game. I want to keep pushing to see how far I can go while testing just how much sacrifice Inscryption asks of me. I love seeing my past selves pop up in my deck reminding me just how trivial resistance is. As I unlock various riddles around this prison cell of a room I’m rewarded with plot or powerful cards. This game nails the addicting loop of knowing what you did wrong and wanting to correct it. If you’re ready to fight for your life, and don’t mind losing it along the way, then pull up a stool and deal the cards because Inscryption is for you.