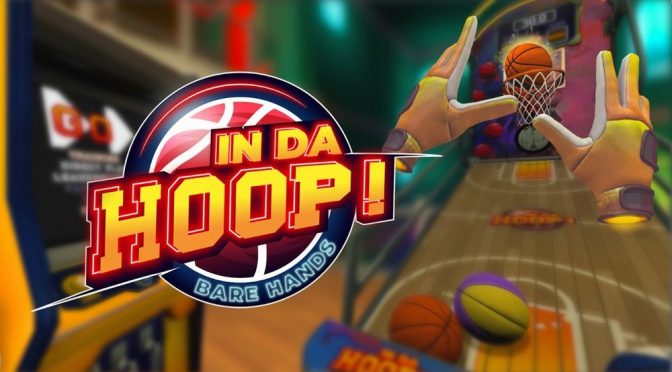 In da Hoop! is one of those games that makes me glad I stopped scoring game reviews because in my 25 years of doing this I have given out very few zero scores, but this would have been one of them, as what could have been a delightful arcade experience turns out to be totally unplayable on both the Quest 2 and the Rift S.  I originally set out to review this game when it launched on the Quest back in June, but found the game so bad I just decided to skip it.  Then the game released on PC a month later and I thought “surely they got it together for PC”, but nope.  Sure they game looks a bit nicer but all the control and gameplay issues still exist, so rather than a proper review this is more of a warning to anyone who might be considering this $10 lemon. 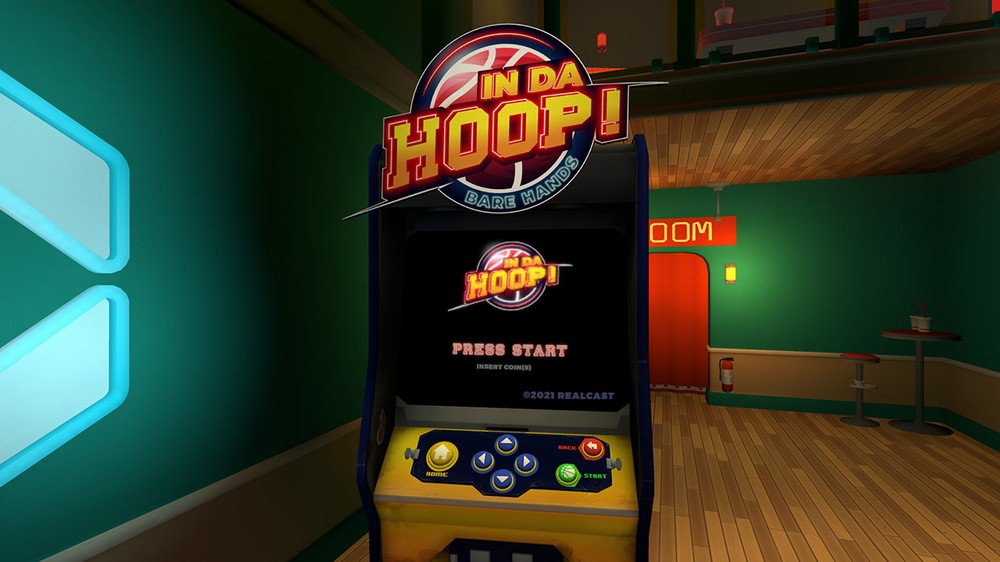 In da Hoop! tries to recreate those basketball kiosks you see at the carnival or in the big arcades like Dave & Busters; you know, the ones with the slightly smaller hoops and the slightly larger balls so only NBA All-Stars have a chance at winning the giant stuffed panda.  This game starts with you standing by an arcade machine with some buttons to serve as your needlessly awkward interface to choosing and playing the various games in this limited bundle.  I have perfectly functional buttons on my Touch controllers, which made it annoying to have to reach out and touch virtual buttons to move up and down a list, especially since the arcade machine is to my left side and I am right handed.

There is a list of mini-games that slowly unlocks the next game when you score at least one star on the current event.  It was odd that I was playing a basketball game and they start you off by spinning and stacking giant dice.  I suppose this is to get you comfortable with grabbing and manipulating items in VR but sadly, this is where the game’s major critical flaw reveals itself from the very first game and progressively gets worse with each new game after. 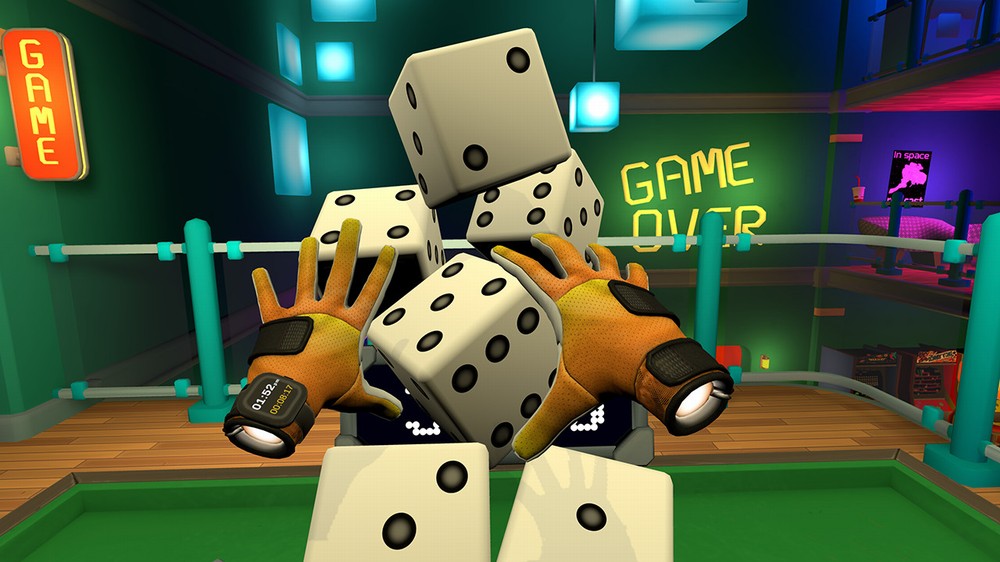 The first game seems simple enough; grab the dice and place it on the pedestal so the number six is facing up.  Games to follow including stacking multiple dice on top of each other like some reversed version of Jenga.  Eventually you get to the basketball games where you at first just drop the ball in the waist-high hoop that is right next to you.  The hoop will start to move away then get higher until you finally get to the traditional arcade experience of shooting the balls at the distant basket and have them roll back down the ramp to shoot them all over.  All of these games award you up to three stars based on how fast you do something or how many points you score within the time limit.

So what is the major flaw that makes this game totally unplayable and nearly unreviewable?  Imagine if you dunked your hands in super-glue or perhaps you are wearing Velcro gloves or maybe you’re Magneto and the objects in this game have iron cores.  Regardless of whatever is on your virtual hands they are SUPER STICKY.  That first game where I only needed to spin the dice to a six took me three tries to do the first time because when I positioned the dice and moved my hands away the dice would stick to my hand and roll over.  Now imagine trying to create a wobbly tower of giant dice where the dice wants to follow your hand as you move it away.  It only gets worse for basketball.  That first game where you are just dropping a ball into a hoop…you literally have to stuff the ball deep into the net then pull away quickly.  If you aren’t fast or deep enough you can literally bring the ball right back up through the hoop.  Trying to simultaneously pull your hands away from the ball above the net almost always results in the ball sticking to one hand just enough that the ball bounce off the rim.  And again, this is happening on both the Quest 2 and the PC-powered Rift S version from Steam. 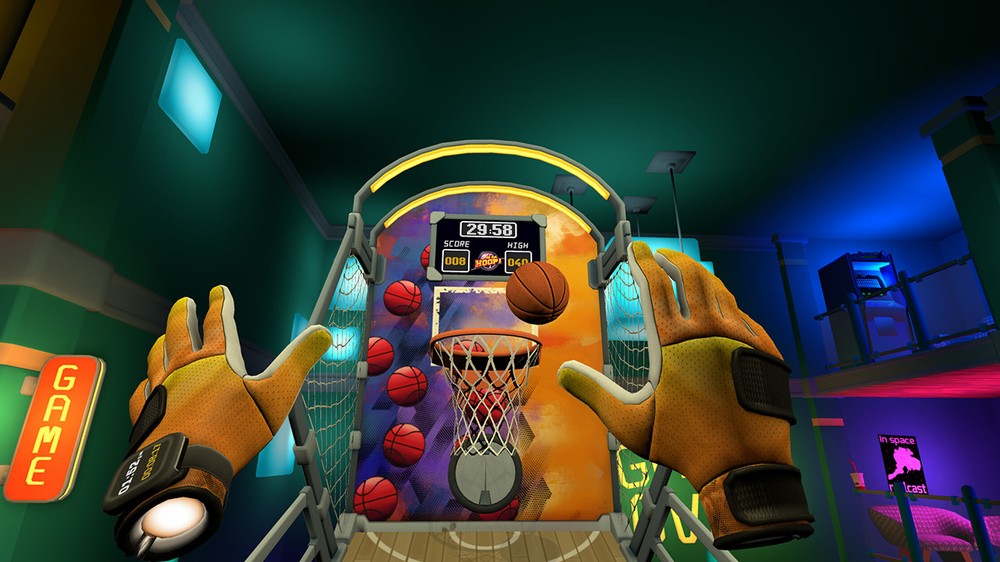 VR has always had an issue when it comes to throwing things whether it’s a tracking issue or the hardware’s’ inability to track inertia and momentum, which often leads to me dropping grenades at my feet rather than throwing them, but this is the first time that “sticky hands” has ever been an issue, especially to the point of ruining what could have been an enjoyable arcade experience.  Every object in the game seems to have zero physical weight, which makes them highly susceptible to any outside influence.

It doesn’t appear that the game is that popular judging from the inactive Steam page and the fact that I am in the #4 slot on several of the game’s leaderboards despite sucking so very hard at this game.  I basically cheated to get my .6 second record time on spinning the dice to six by spinning it to four and then pulling my hands away so the “sticky” turned it the rest of the way to six. 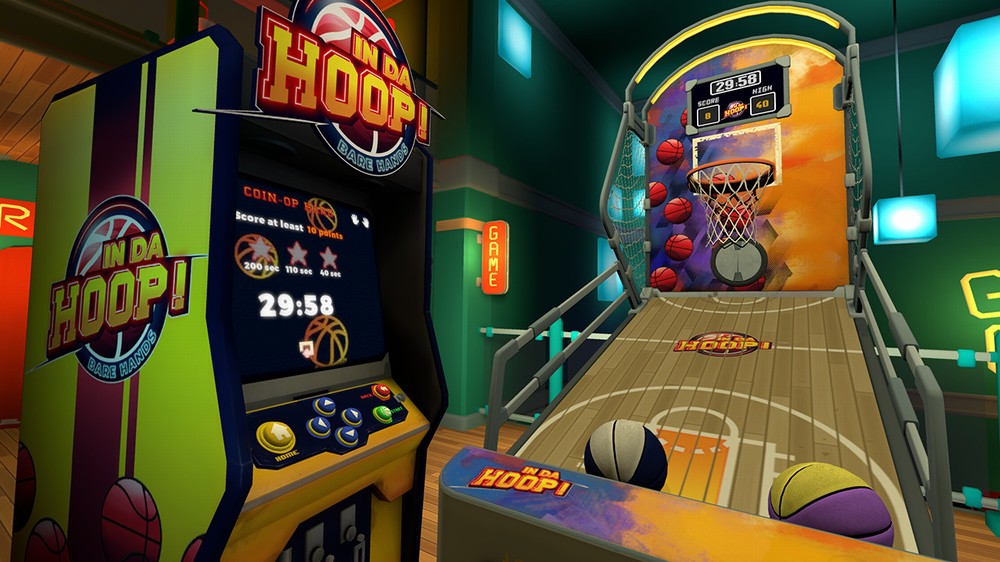 Unless there is some sort of config file variable or options setting for sticky hands that can be disable I don’t see how In da Hoop! could ever be playable let alone enjoyable without a serious patch or update.  I enjoyed the retro vibe of the basic arcade with its fun colors and textures, but the menu controls were needlessly awkward and the game controls were fundamentally flawed to the point where I strongly encourage everyone to skip this game and take your $10 to the county fair or your nearest arcade.  You’ll stand a better chance of winning there.