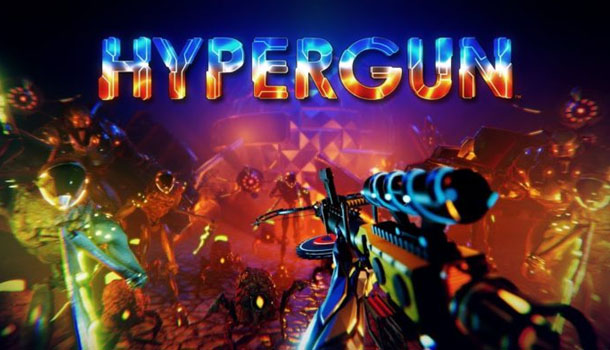 HYPERGUN puts a comedic and corporate spin on the traditional FPS genre while throwing in just enough rogue-lite elements to dangerously walk the line between replayability and mind-numbingly repetitive. Thankfully, the cleverly interwoven humor and bleeding-eye visuals make this one of the more refreshingly original indie shooters of recent months.

There is a lot to do in HYPERGUN before you actually do anything. Simply exploring the colorful office space and interconnecting corridors will take several minutes, before you even stumble into the testing labs where you get to build and test weapons in increasingly difficulty challenge arenas. There is a lot going on behind the scenes of HYPERGUN starting with choosing your corporate character class that will determine your core gun and various abilities. Things get really crazy when it comes time to start building and customizing your guns with all sorts of attachments that would make Ratchet and Clank envious.   Customizing your weapons is a delicate dance of numbers, as you weigh the pros and cons of various attachments and how they affect your core performance, but rest assured that no matter what you end up with the visual rewards will be worth it. 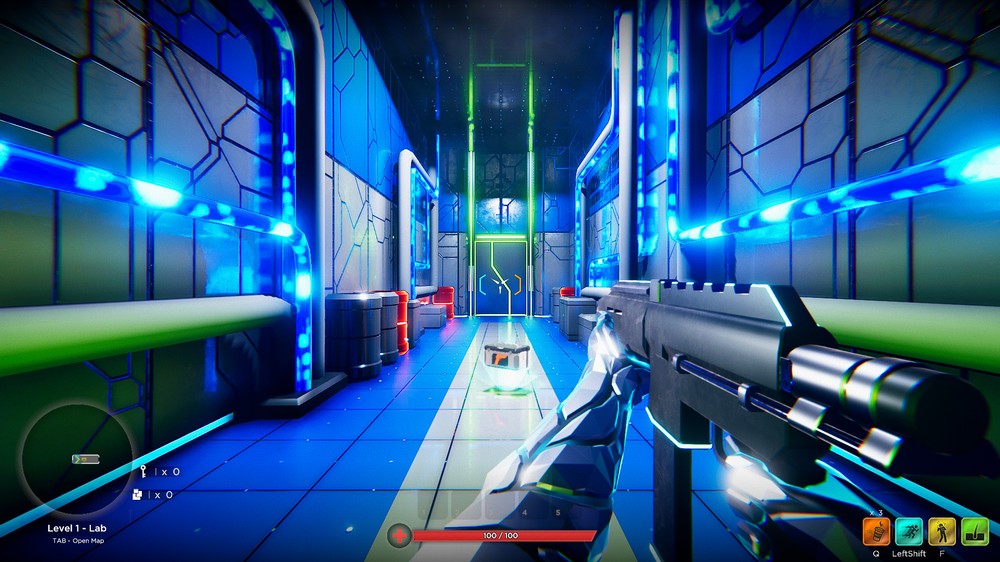 Challenge rooms are basically a series of arena-like chambers loaded with a variety of ground and air enemies that will have you switching up weapons and backpedaling like a madman as you scramble for pick-ups and the teleport pad that will zap you to the brief safety of a nearby connected passage. HYPERGUN does have a rather steep learning curve, and it can take a few hours before you balance out the combat to where you are earning the coins to purchase parts to make you effective enough to even think about tackling the first boss.

Eventually you’ll find your groove within the flow of the game and it all becomes rather easy. As long as you are keeping your weapons properly modified and don’t stand still for more than a second it’s pretty hard to die, so the game then becomes about earning all sorts of crazy cash and building even crazier guns. Again, the attachments are pure insanity as are their comedic and often deadly effects in combat. If you love to experiment with guns and gun parts then this is the game for you. 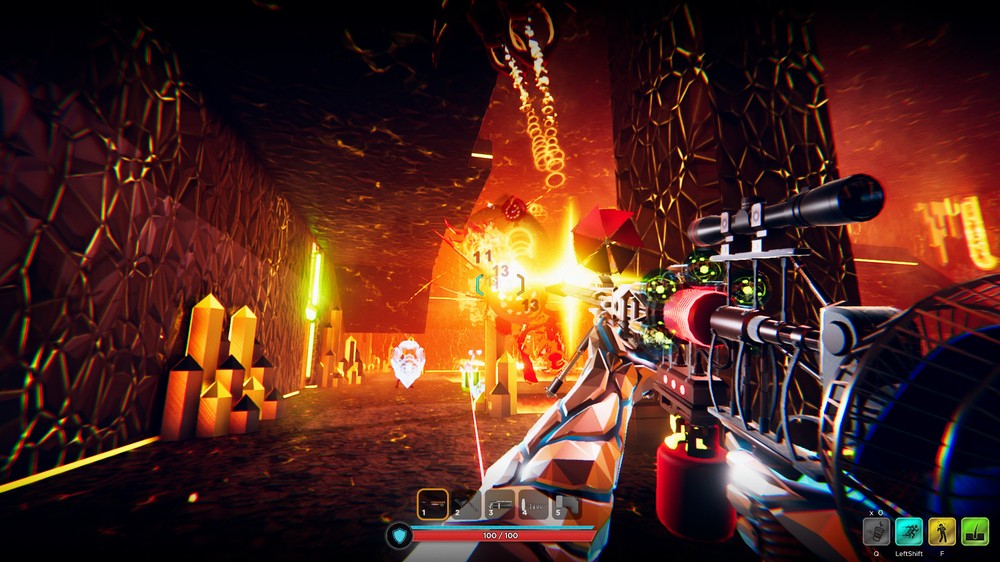 The levels in HYPERGUN are procedurally generated so no two trips are the same, although they will look similar as they are constructed from a limited set of room and passage designs that are randomly assembled. The mix of neon colors and the randomization of enemy types and numbers will have you constantly changing up your tactics, while the more sedated office spaces will encourage you to explore and do a bit of reading off the random tablets scattered about.

For as clean as the visuals were I was a bit disappointed with parts of the audio. While the music is energetic the sound effects for the weapons do not mirror the intensity of their carnage, and the various enemies, whether robotic or otherwise, were rather uninspired and lacked individual clarity when a dozen or more of the same type were dropped into a confined space. 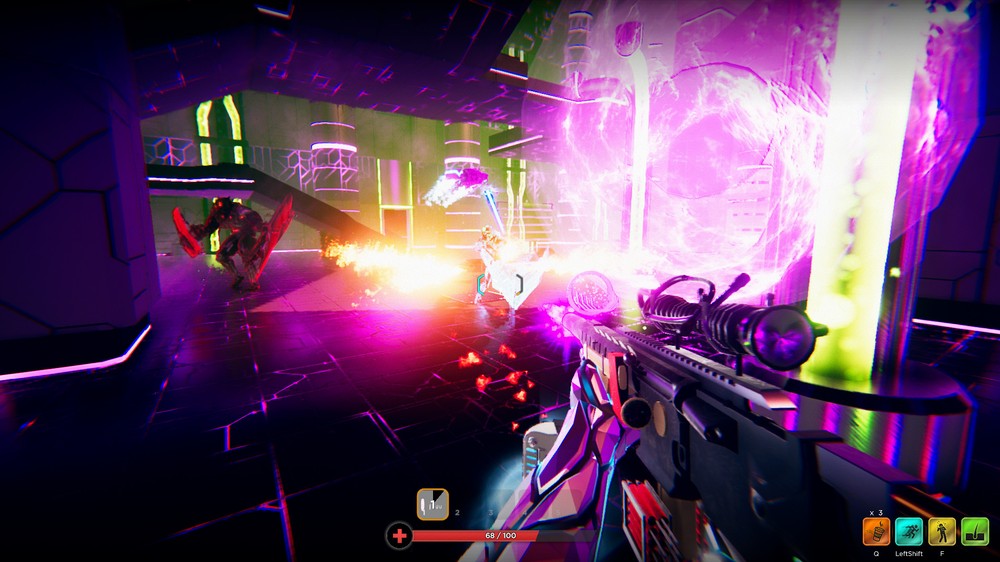 HYPERGUN has a great flow to it once you overcome the slow upstart process of playing for the first one or two hours. Then you get into the rhythm of finding weapon parts or better yet, finding hyper coins which allow you to purchase much better weapon parts than anything you can find. There is considerable randomness to the game which leads to a bit of repetitive grinding when you don’t get what you want, but each new trip through the game is always fresh, fun and exciting.

With more than 150 weapon parts and infinite potential of randomized level design, HYPERGUN is one of those games that will offer up “fresh content” for as long as you want to play it. How long that is will only be determined by your love of weaponized insanity and your tolerance for a rogue-lite grind masked with cool visuals and lots of humor. 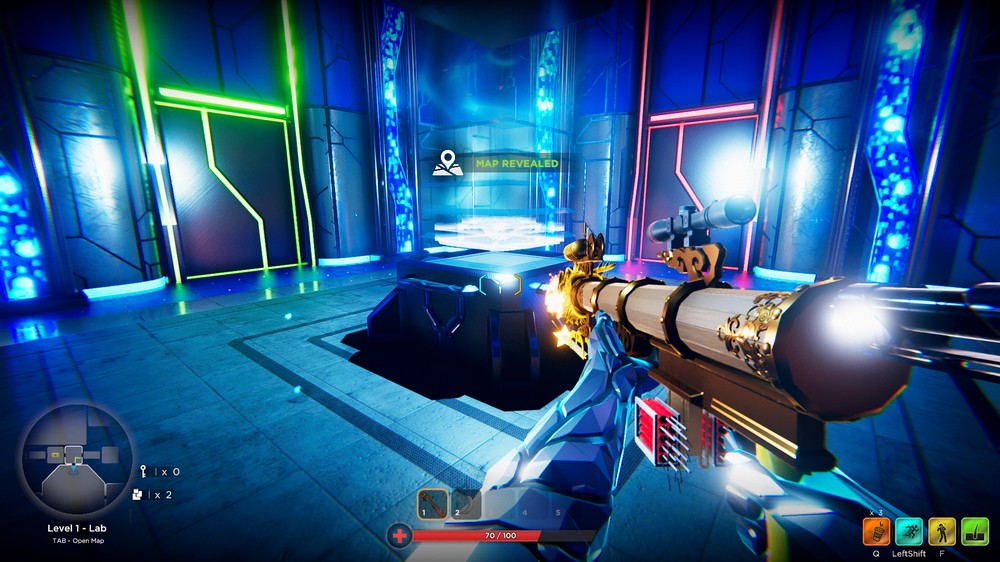 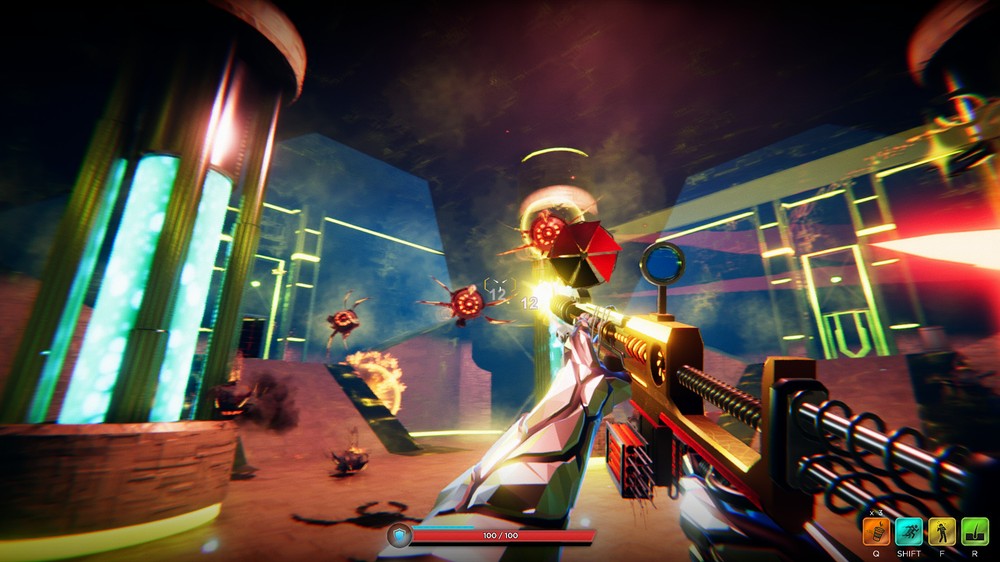