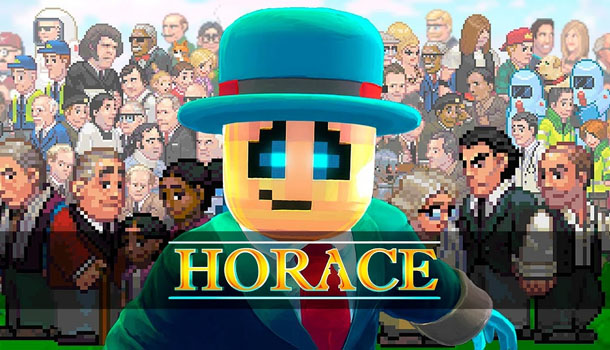 When I first started up Horace, I wasn’t entirely sure what to expect. It had been described to me as mind-boggling platformer with a British sense of humor. While the platforming does mess with your head, and the humor definitely references a large number of British staples, what the description failed to mention is that despite the charming appearance, Horace is hard as nails. This is a platformer that requires precise timing, near pixel perfect accuracy in your jumps, and a level of patience or determination that will allow you to attempt the same gameplay segment over and over while you make only incremental gains each time. Despite that, I soon found that I couldn’t stop playing Horace, and that hours would pass in the blink of an eye.

Horace begins with the titular character being delivered to his new home as a freshly built robot, and your first minutes with the game are spent learning the controls of the game and what you’re expected to do, which initially seems like picking up pieces of trash. Within the first hour, though, the narrative takes an unexpected twist and what your expectations for the story are turned on their head. This actually happens a number of times through the course of the game, as there are multiple segments where the subject matter drastically shifts and leaves you with a task on your hands that you wouldn’t have dreamed of in the preceding moments. While Horace is a 2D platformer in the way that it functions, it also operates quite closely to the hallmarks of an adventure game, as you’ll take Horace to a number of different locations, solving puzzles, rescuing friends and taking part in all kinds of side activities. 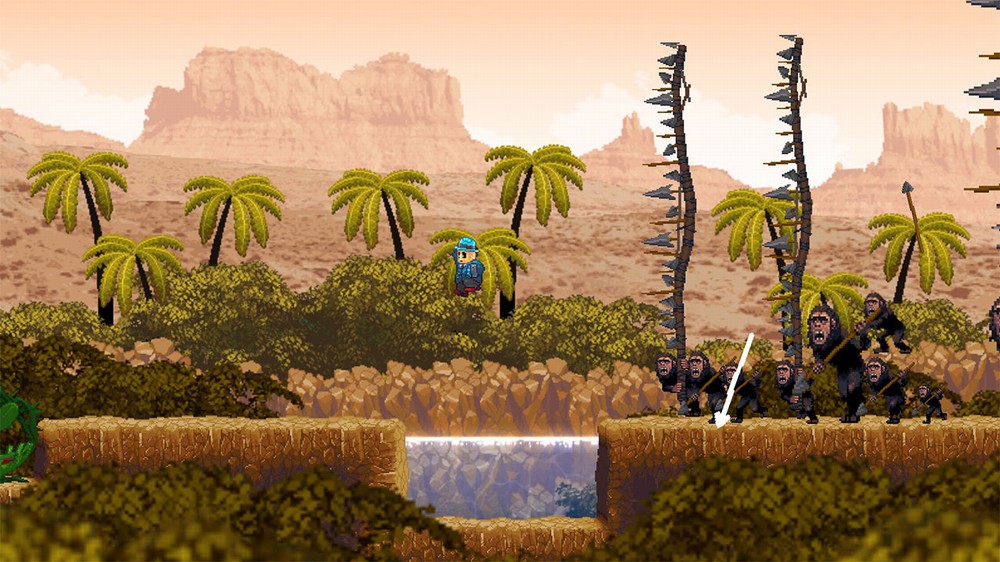 There’s a definite air of madness to Horace, which proves itself to be welcome as a palate cleanser between particularly difficult sections of gameplay. Outside of the game’s wonderful sense of humor, which had me laughing within the first few minutes and continuously raised smiles from both myself and my partner through the remainder of the game, you’ll be taking part in all kinds of side activities, from jobs where you’re washing dishes to driving an escape van and blowing up your pursuers. As well as trying to reference almost every single piece of popular British culture from the 1990s, Horace seems to want to include a section representing every gaming genre from the period as well. Horace is a near-constant stream of references, but they’re not thrown in your face in a knowing manner, most are signs in the background, characters that you’ll walk past in the street, or even a throwaway line in a piece of dialogue.

Focusing too much on the comedy aspect of the game would do the actual gameplay of Horace a disservice, however. At the beginning of the game, I was expecting Horace to be an experience that lasted a few hours, maybe six at most. In truth, the full experience is probably twice that, with the option for more if you want to see absolutely everything. Throughout, Horace wants to test you, and while it has a death count on the pause screen, it’s best not to pay too much attention to this figure if you value your sense of self-worth. From the first few obstacles I was dying at a rapid pace, and while admittedly a lot of these deaths were caused by my being reckless, it’s safe to say that even careful players will struggle with this game. There’s a certain balance between hanging back and just going for it that seems to be the correct approach for succeeding in Horace, and I lost count of the number of times I managed to just squeak through a section. 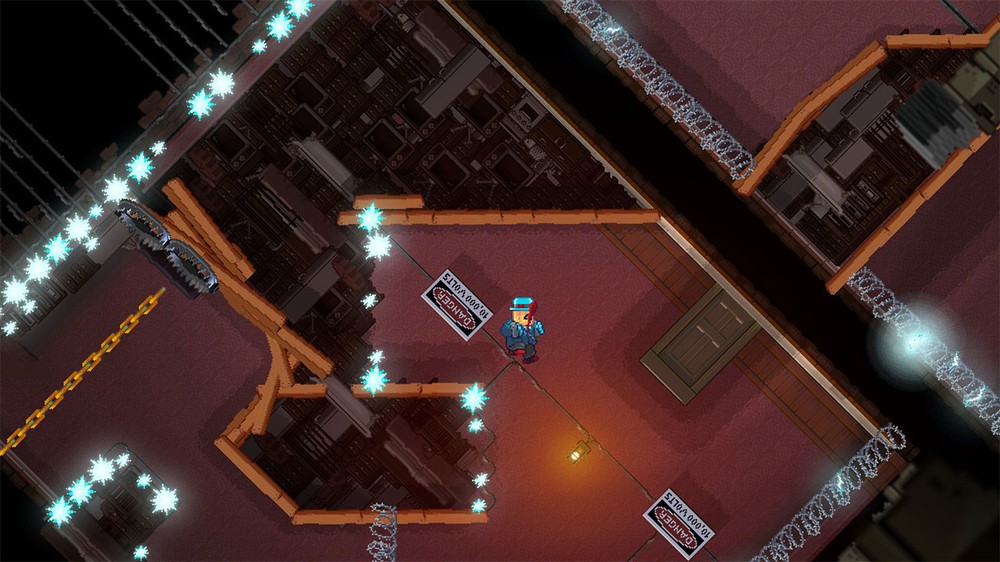 Despite the struggles, Horace never really becomes a frustrating experience, but also never compromises itself in an attempt to make the experience easier for the player. As you start to get hung up on a section and die repeatedly, the game throws you a lifeline by granting you the use of one or two shields. These aren’t forced upon the player but are instead left by the entrance to the room that you’re in, available for use if you want the help. However, Horace never lowers the difficulty of the challenge that you’re facing. The shields might give you the chance to take a couple of extra hits or make an extra mistake before dying, but you still need to overcome the same obstacles that were in front of you at the beginning. This is an excellent way to allow the player to still learn the skills that they need to progress through a room, but to also prevent the experience from getting hung up on one particular section.

Because Horace goes a long way to encouraging the player to keep pushing forward, there’s never the sensation that you’re not making progress, even if you do start to struggle in a certain area. There’s a frequent delivery of new gameplay requirements to keep the experience feeling fresh, from new obstacles to new environments to new abilities for Horace himself to use. One of the earlier additions to Horace’s arsenal is the ability to walk on walls and ceilings, with the camera flipping around to allow you to view rooms from a new perspective. This mechanic allows for some excellent puzzle design and some inventive solutions, and though the rotation caused me to feel a little queasy at times, I was often in awe once I figured out what the answer to a problem was. I did find that the signposting could have been a little better in certain points, however, as some of the larger environments can get more than a little confusing, especially when your sense of direction is already out of line from the screen rotation. 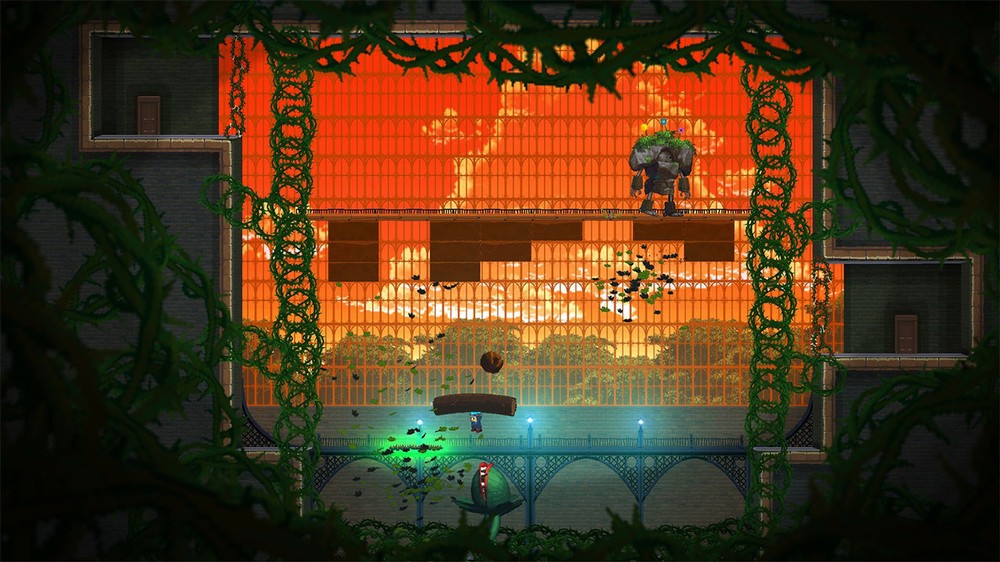 Horace did strange things to my emotions, and despite the fact that I thoroughly enjoyed the game and there were sections where I loved what it was doing, there were similarly sections where I was ready to throw the controller out of the window. This was never due to a fault of the game though, as it is remarkable that regardless of how much you can struggle in an area, Horace never feels unfair. There’s an impressive balancing of the difficulty curve, as while Horace constantly presents a challenge, it doesn’t feel unattainable and I was always convinced that I could beat a room in just one more run. While there could be accusations that the game runs overly long, and that some of the level design could be tighter, I have to say that Horace was a most welcome surprise, and anyone looking to flex their gaming muscles should definitely be looking to pick this up. Even if you’re not the best at gaming and just want to play through a charming and amusing adventure, Horace wants you to succeed, and any walls that you run into, the game will do its best to help you break through them. I was unsure what to expect when I first picked up the game, but I’m definitely glad that I did.