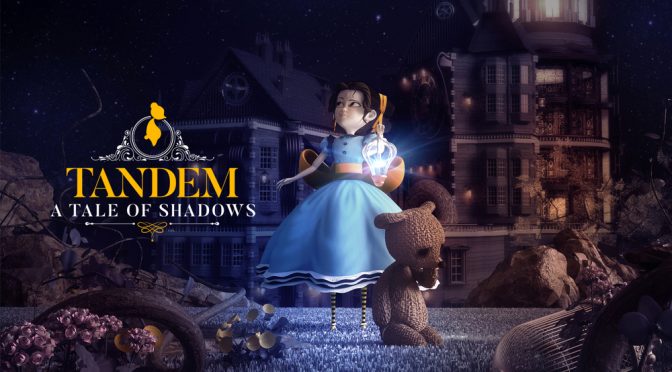 Developer Monochrome and Publisher Hatinh Interactive have unveiled a new character trailer for upcoming mystifying puzzle platformer Tandem: A Tale of Shadows, slated for release on PC, Switch, PlayStation 4 and Xbox One later this year. The game follows an intelligent, strong-willed girl named Emma and an eccentric, anthropomorphized teddy bear named Fenton as they investigate the disappearance of Thomas Kane, the only son of a famous family of illusionists, and survive the illusory dangers that await them.

A free demo comprising Tandem’s first universe and initial seven levels is now available until June 22 as part of Steam Next Fest.

While Emma may seem coddled at a glance, she’s fiercely independent. Despite her young age, the girl can maintain composure when faced with uncertainty and knows how to learn from her mistakes. Fenton may appear indolent when measured against Emma’s determination, but acts as a great complement to the indomitable woman, comforting her when hope fades away.

From the top of his wall, Fenton observes Emma and is ready to leap in to help her progress in her dimension! There’s no need to talk to each other: the switch between the two characters is immediate. Fenton will be able to jump to the next door as soon as Emma creates the solid shadow on which he can move. But before that, Emma must identify what she is using to create the shadow each time she enters a new room in the mansion. This is the only way to give Fenton an accessible platform!

Emma and Fenton work as a duo: Emma, in her dimension, creates shadows and Fenton unlocks the levels that will allow them both to progress. Emma must also face enemies and bosses. But she can count on Fenton’s help to repel or attract them!