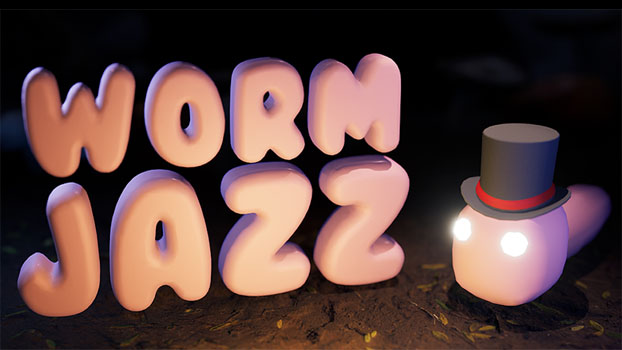 Worm Jazz is a unique, wriggly puzzle game that combines the elongating body mechanic of  Snake with the explosion-heavy demolition of Bomberman. You take control of Mr. Mark, an earthworm with a taste of smooth jazz and dapper headwear. Writhe your way through the many intricate, mind-bending mazes filled with mines, wormholes, and powerups! Shrink when you blow yourself up and expand when you scarf down some chow. Are you able to gobble up all the food on each stage to reach the highly coveted golden apple?

Worm Jazz appeals to every type of player: from puzzle aficionados who will enjoy unearthing the path through the labyrinthine levels, to the completionists who will attempt to gobble all the food in each stage; while casual players will enjoy the challenge of progressing through the 50+ stages. The open world overworld structure allows players to prioritise which tasks to tackle first, with wormholes and boulders popping up as new environments become available. With no timer, Worm Jazz can be played at your own pace and every move can be undone. This laid back atmosphere is complemented by a swanky soundtrack composed by jazz maestro Oliver Getz, who painstakingly put together loops of calming, upbeat tunes to chill out to. Worm Jazz can at times confound challengers, so this smooth soundtrack offers the chilled vibe needed to master the maze.

“Something I love about both video games and jazz is their unique ability to let us relax, focus, and chill out,” said Inconspicuous Creations founder and developer Yu He. “Worm Jazz is that in a nutshell. It can be very challenging, but in a cozy way. Like a Sunday crossword or sudoku puzzle on a rainy day. Only with a bopping bespoke soundtrack and nifty hats!”