Boxing has a long and usually distinguished history as a sport. Many famous names like “Boom Boom” Mancini, Muhammad Ali and Rocky Marciano will live on forever as legends of the ring. Vivid Games however lets players become their own legends in Real Boxing for the PlayStation Vita. This on-the-go boxing experience offers players to go from amateur to pro boxer through a series of increasingly difficult fights all for the comfort of your hotel room, bus or office break room.

I may not be the best when it comes to boxing games but I’ve played some of the best that the industry has to offer over the year. Vivid Games’ Real Boxing first got its start on the iOS and Android Markets (neither of which versions I knew existed until now) and has made a new home on the PS Vita thanks largely in part to the large touchscreen. Starting off your boxing career and navigating the menus are done entirely by touch though when it’s time to actually fight several options are available.

Players have to first set up their country of origin, name their fighter and then alter their appearance such as hairstyle and clothing colors to make then unique from all the other heavily muscled boxers that you go up against over the course of your career. This same character profile carries over to the multiplayer modes as well so hopefully you shouldn’t run into another clone of yourself. Luckily your fighter is always the one on the left side of the screen for the solo experience. 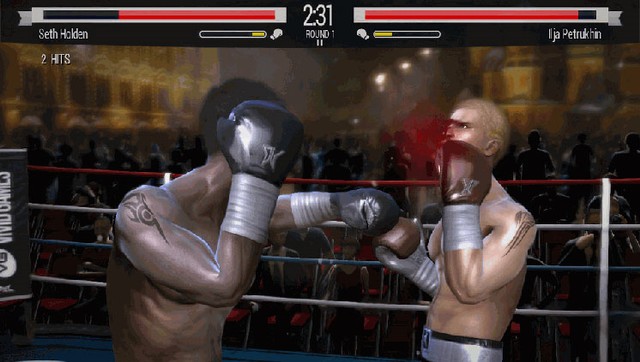 Controlling your fighter can be done a couple different ways thanks to the physical assignment of inputs. There are two means in which to dodge, block, clinch and lay out some devastating punches. By default you use the button and controls which utilize both Sony’s face buttons and the D-pad to execute jabs, hooks and uppercuts. The bumpers initiate blocking and dodging independently or to initiate a potential fight saving clinch when both are pressed at the same time.

Some, like myself, will most likely find the face button/D-pad option to be a little cumbersome. I found myself feeling like I was playing Rock Band on the PSP all over again. Luckily you use the right analog to execute all the moves with a correct flick of the stick. This is easily the more natural way to go about controlling your boxer in a fight. However I favored the touch based approach which would play to the title’s origins. By selecting the touch based option you lose the ability to directly control the movement of your boxer which does tend to draw out the fight, as the computer controls the boxer movement towards or away from the opponent.

The reason I like this mode is that you have to tap or hold and swipe on either the left or right side of the touchscreen to pull off hits from each arm accordingly. Touch controls for blocking, dodging and clinching also appear on the bottom of the screen as well allowing the player to keep their fingers close for precision timing. I only experienced minor touch input issues where a hook or uppercut input would trigger a jab instead. 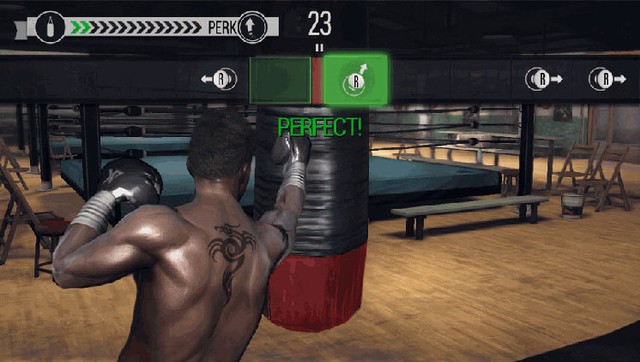 Real Boxing will test your ability to use whichever control scheme you prefer effectively to make it through three tournaments to the final fight. The first tournament is actually pretty mellow assuming you don’t make too many mistakes, but by the time you get to the second and final tournaments the difficulty ramps up significantly. Winning fights and meeting the various challenge requirements will net you upgrade points to raise your stamina, speed and strength. Earning these points are absolutely essential to make it through the tournaments. Another way to increase your skill levels is to purchase them with the money earned from fights. Personally I find this to be a cop-out as you didn’t actually earn the points based on your own skill as a player.

One thing that will help on your way to top boxing champion is the perks system. There are practice mini games where you can train by jumping rope, practicing hits against a punching bag or speed bag after each fight. Completing these will fill up a bar to unlock abilities like being able to get up off the mat a little easier or an aid to win clinches. You can have two equipped at one time and more are unlocked as you complete tournaments. Some of them are quite useful, but that won’t keep you from having to redo the first and second tournament again just to get your boxer up to the level of your opponents in the 2nd or 3rd tournaments. 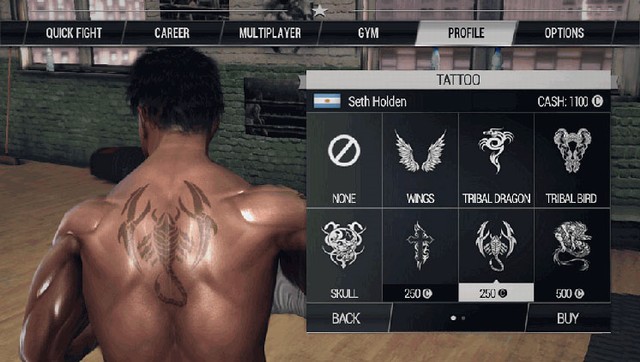 Real Boxing not only features a pretty good fighting system but it looks really good for a Vita title. Vivid Games does a great job of capturing the dimmed room, lit ring and camera flashes that you would expect to see at a Vegas venue. I loved the little details like sweat and blood flying off the boxers with every bone jarring hit. If you time dodging the match goes into a slow motion effect allowing you to get in one or two solid hits before the computer recovers. The biggest issues I have visually are that the animation used when throwing a hook looks extremely awkward as if the arm was filled with flexible rubber. The other is that the girls holding the round signs are… horribly malnourished.

Sound wise, Real Boxing does pretty good as well save for the announcer that, while somewhat authentic, get old real quick as he keeps repeating the same old canned lines. The ring entry music is good and the sound effects such as connecting hits and the sound of shuffling feet on the mat sounds authentic. The menu music that you’ll hear between fights is awesome, even as a standalone piece of music.

Real Boxing has a solid single player experience but I think that its real appeal can be found going up against real players in the multiplayer modes. Players can compete in single fights or tournaments over the internet from all over the world which is quite amazing and humbling at the same time. If you don’t want to take things global there is an option to challenge friends locally via ad-hoc. Both options feature a really solid netcode as I encountered no lag or dropped matches in either mode.

I’m not much of a sports guy when it comes to the real thing or video games, but I have dabbled with them occasionally. Real Boxing for the Vita is a surprisingly pretty package both in its graphics and its fight mechanic. I really liked the use of the touchscreen as not a lot of Vita games use it wisely or effectively. I found it a lot easier to throw punches with the screen rather than the D-pad. The smoothness of the online play was also an awesome surprise, as I’m used to mediocre connectivity when it comes to portable gaming, so this game definitely gets points there. Bottom line; if you love boxing and want to train, fight, and experience the thrill of a portable boxing sim, then Real Boxing is the way to go. 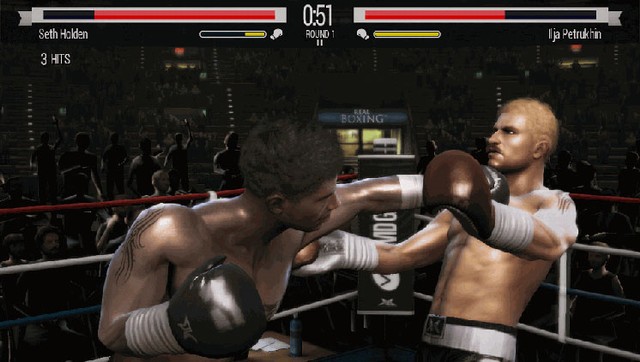 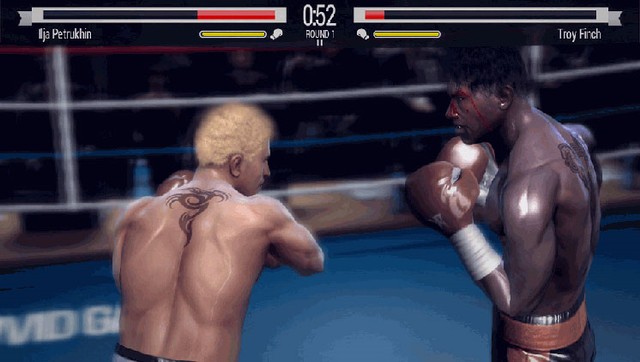 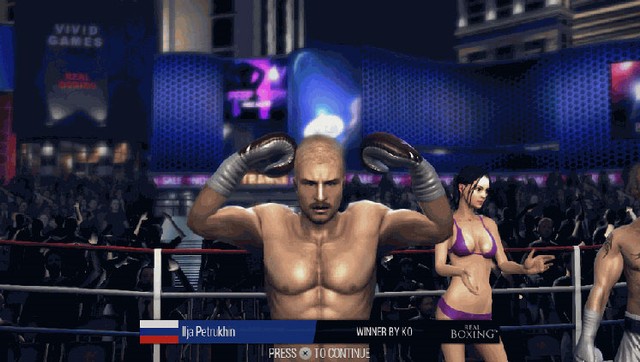 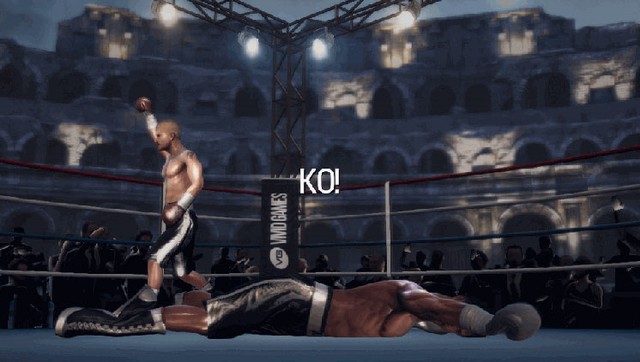 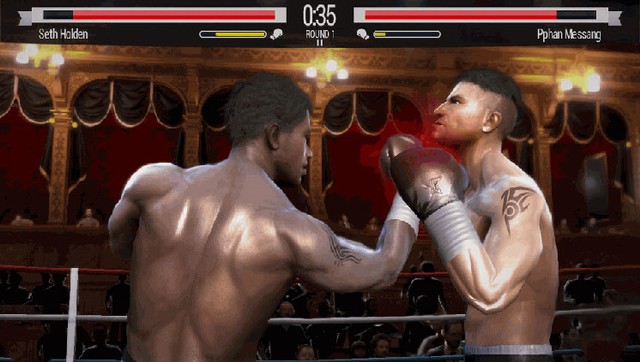