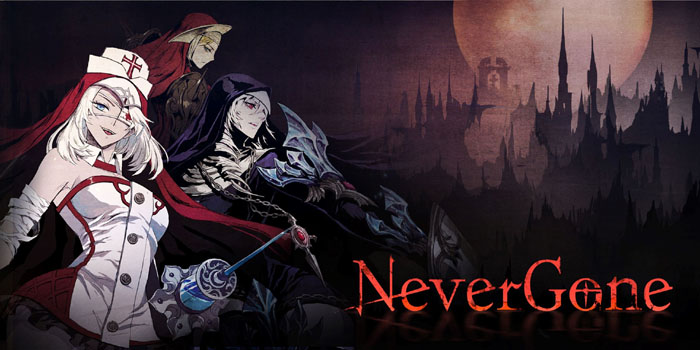 It’s been a good while since I’ve actively played a mobile game for any stretch of time but thanks to Hippie Games that all changed with the stylish release of Never Gone for iOS. Fair warning this game is so stylish that it will push the limits of your iPhone or iPad so make sure you have a device newer than the iPhone 4s or iPad 2/Mini before purchasing Never Gone. For those that do, well you’re in for some good old fashioned brawler action in the veins of Devil May Cry and Streets of Rage.

I loved playing old school brawlers growing up just sitting on my couch playing cooperatively with my brother or friends which is something that I sorely miss in today’s gaming market. While Hippie Games first release on iOS is a single player experience it proves that for both this gamer and the developers that old school brawlers are never gone from our minds and hearts as gamers. Never Gone is a 2D action that is both a blast to play though complex enough to offer a challenge to those that head into a gothic world where war is constantly waged between vampires, demons and humans.

Players can choose between the poster boy badass Blood Knight Dawn on the App art or Higgs the Dark Sister. Both characters are selectable from the beginning with the other available for a second story slot by default. While both feature the same basic commands for combat these two characters are different enough to make you want to experience both through the three chapter story line. Combat breaks down into standard attack, block and jump inputs while moving around on a 2D plane similar to beat-em ups where you need to be on or near the same line of attack as your enemies to hit them. 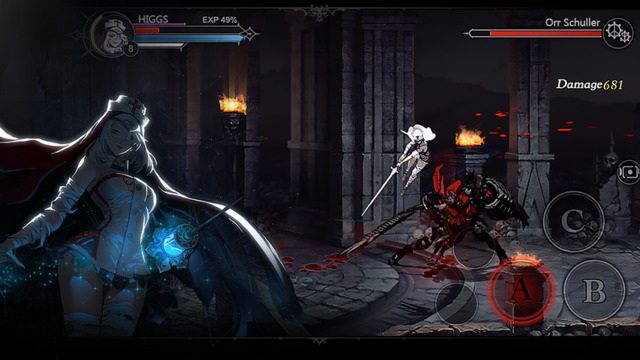 The combat mechanic is somewhat generous with the hit detection though depending on the attack as you will more often than not hit enemies just above and below your path allowing you to rack up some nice area of effect damage. That’s not saying that combat will be a breeze though as you will come across new enemies that will take more than rapidly tapping the attack button to break through their defenses. Finding the right approach to breaking an enemy’s defenses is key to survival. Sometimes a well-timed block and counterattack will open up a tough foe to a barrage of hurt that if timed correctly will render them unable to attack. This doesn’t really work so much with bosses though as they often require everything you got to beat them.

The real truth though is that you will inevitably have to grind to take on some bosses or even get through later levels as Never Gone has zero grey area when combat is concerned. Skill makes up a huge part of the combat but often you need the strength through leveling and gear behind those to attacks to come out on top. You don’t gain access to purchasing gear until after the first level or weapons until after the following one. The catch is that much of the good gear you really want is costs Crimson gems to be able to purchase them. While these gear pieces are extremely useful they come at a price of time or hard earned real world cash.

I will make it perfectly clear that Never Gone is not a pay to win title, something even the developers reinforce, but you can purchase Crimson Gems with real money with the lowest offering of 60 Crimson for a dollar. That will afford you at least two pieces of gear but therein lies the problem as they are almost always part of a set. True to titles like Diablo equipping multiple pieces of a set of armor will gain you additional stats like defense against situational damage like the first set you can purchase. 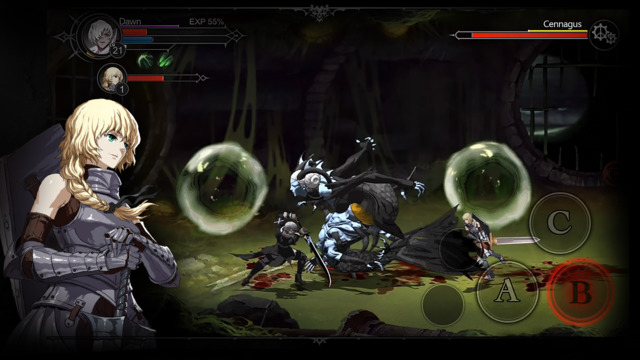 This is particularly nice as the stat to take less damage from behind is exceptionally useful when enemies (specifically ranged ones) will attack you from off screen where they are untouchable. Yeah Never Gone is unfair that way so it’s best to finish those guys off quickly if possible. The cool thing about purchasing gear from the merchant in the hub world is that you have the chance that you will be rewarded with a better version of the armor with a randomizer. You still gain the set bonuses if it’s not exactly the same armor just as a long as it’s in the same family.

You’ll also come across schematics as a reward for completing levels. These can be used at the Blacksmith in the hub world to create newer and better weapons. You can even improve existing weapons to make them more powerful if you meet the resource requirements. This is real important as weapons that gain or have an increased sharpness rating are capable of dealing with shielded or armored characters a bit easier. The hub world also allows you to buy health potions, take on harder versions of bosses via the rather annoying intel lady and upgrade the capabilities of your hub world.

I’ve mentioned briefly that Never Gone has a stylish presence to it. The world is dark and brooding and is filled with nightmarish creatures that stand in your way of ultimate victory. Combat was largely fluid thanks to quick combat animations and a customizable button layout. This proved useful since I tended to hit the default button on the screen for the health potions in the heat of battle accidentally a time or two. Combat in Never Gone could also gain even more precision if you have one of the various MFi controllers that have physical face buttons and a real directional pad which the game supports. 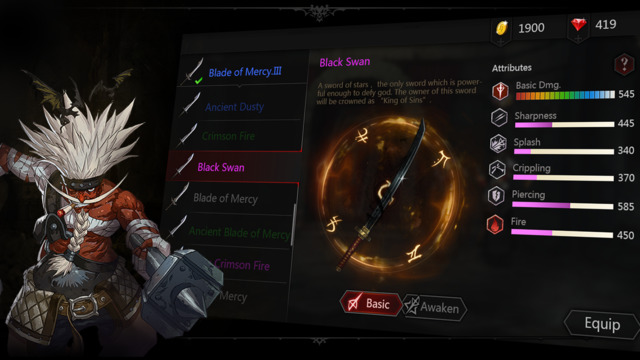 Even right from the moment I loaded up Never Gone I knew that it was going to be something special when I heard the music flair up amidst the lightning and thunder. Never Gone not only has a great visual presence filled with dark artistic flourish in but an awesome audio package to complete the experience as well. I wasn’t until I played several boss encountered that I knew that I recognized the vocals behind the songs from somewhere. Turns out that the music is done by none other than the awesome Swedish metal band Therion whose members also make an appearance in the game as well. Their symphonic vocals and metal chops really add some energy to the game that makes it a blast to play.

And play you shall as Never Gone has a lot to offer be it playing through the story completely with both characters, to maxing out your base of operations, or tackling the endless Mist Tower for the ultimate challenge. Great thing is that Never Gone can be played in small doses as most levels don’t all that long to complete with the boss levels not withstanding as they often take time without the proper equipment, level  or skill. There is the fact that grinding is pretty much a necessity which in a game like Never Gone is really a blessing as practice makes perfect. You’re only going to get better the more you play as you get down the combos and learn each enemy’s weaknesses. So if you want an old school brawler with a new school finish and rocking music then look no further than Never Gone for iOS today. 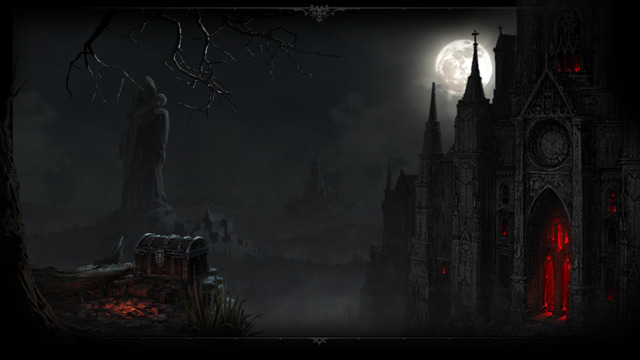