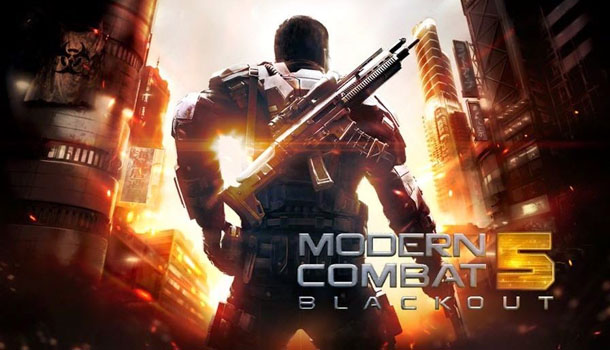 Modern Combat 5: Blackout does a remarkable job of bringing a console quality FPS to the iPad (and iPhone) with all of the explosive action, combat, and Michael Bay set pieces we’d expect from a Call of Duty or Battlefield installment.   From the open credit sequence through the next 6+ hours of single-player campaign action I was continually blown away with each new mission.

You start off as ex-marine, Caydan Phoenix sent into scenic Venice to squash a terrorist threat, but in the process learn than the very agency you work for is a front for their own terrorist agenda. Sure, the story is a bit played out, but it gets the job done for setting up some amazing combat and movie-like action sequences.   And that’s just the single-player game.  Modern Combat 5 is loaded with multiplayer combat as well for squad, team, and online versus modes. 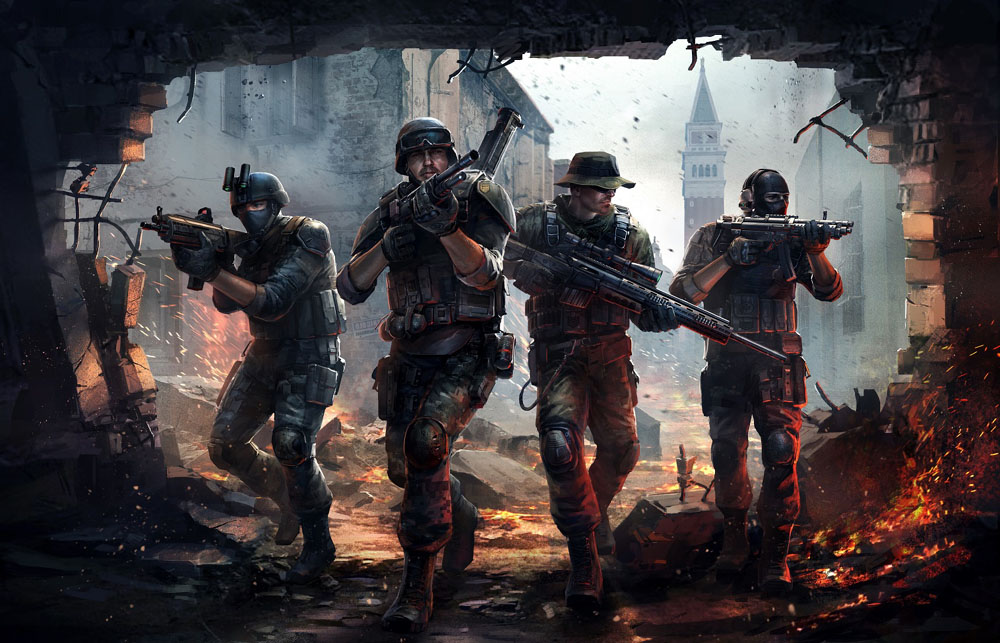 You get to tailor the way you play thanks to a nicely implemented class system that allows you to choose Assault, Heavy, Sniper, and Recon roles and then tailor those classes by unlocking custom abilities by spending Skill Points you’ll earn through gameplay.   You’ll also earn XP that will allow you to level up not only your character, but also your weapons, which in turn unlocks new tiers and attachments.  Plus, everything you do in single player carries over to multiplayer, so by the time you finish the campaign you should be more than competitive in the online arena.

From your home screen you have access to your current character, solo and squad special events, and multiplayer operations.   You can also call up your character profile to view stats, medals, and all sorts of data.  A squad menu allows you to easily invite friends and manage groups of players.  As you make your way around the globe in the solo game you’ll have unique screens for each location that offer a story-based mission as well as a Spec Op challenge and a Multiplayer event specific to that location.  All of these game modes have their own subset of challenges that reward you with stars, so there is always that incentive to replay previous missions to pick-up missing rewards.

Modern Combat 5: Blackout is so good at times it can be hard to put down, and even when you do take a break the game is constantly calling you back with notifications about some new daily mission or timed special event with big prizes.   The game also requires an active online connection.  A 4G/LTE is good enough to sync stats for single player sessions, but you will have to have Wi-Fi for multiplayer if you plan to be any good, and especially if you want to chat.

With all the content and polished presentation of a major console release it is sad that the only thing the game is lacking is proper controls. If this game had a controller or if it were available on a system that did it would instantly get a huge bump in score.   As it is, the virtual dual stick touch method is not nearly reliable enough to play this game effectively.   Even 5-6 hours in I was still struggling with moving and aiming and trying to use iron sights, reload, and toss grenades.  There is just too much gameplay and not enough controls despite the game offering all sorts of customization in that area.

But even despite the finicky controls, there is no denying you are getting a console-quality shooter for a fraction of the cost. If $7 can get you this much solo and online content in an FPS game of this magnitude then it might be well worth it to put up with the frustrating controls.  They don’t fail all the time, and when they do work Modern Combat 5: Blackout is perhaps the best example of what a next-gen game can look and play like on a mobile device.